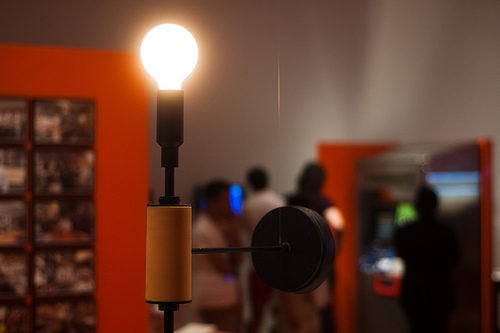 After a month of absence on the Funambulist, the guest writers series is coming back with its 18th opus written today by Esther Sze-wing Cheung, principal of ESC Design and currently working with the Reversible Destiny Foundation (Arakawa/Gins). Her essay, entitled Twin (Technology / Art Induced) Architectural Daydreams is a mind peregrination triggered by two pieces of art she recently encountered. While the Strangle Poise Lamp (by James Chambers) questions in her, the potential  contractual masochism that industrial design and architecture could develop with the human body, the Object Breast Cancer (by caraballo-farman) pushes her to investigate the symbolic dimension of architecture as a conscious or unconscious memory once physically experienced by the body.
This essay is thus a small ode to the process of creation that chronologically alternates a brief understanding of reality with what Esther calls here a daydream which eventually leads us to the production of artifacts, subtle chemistry of the reality’s objectiveness and 0ur imaginary’s subjectiveness.

On a sunny September afternoon, I found myself fighting through crowds of metropolitan art-goers, hipster-technologists and prolonged-adolescent-adults, grazing amusedly in a tall, open, windowless room at the MOMA’s Talk to Me exhibit, amidst an assortment of flat screen monitors, tastefully colored info-graphics, blinking LEDs and beeping. Halfway through my procession through this spectacle, I circled back to the room center and was curiously confronted face-to-face with a seemingly unremarkable floor lamp, except for an unusual spongy beige section on the lamp-neck. A parody on the classic British Anglepoise Lamp, this piece humorously titled Strangle Poise Lamp, was designed to be strangled to death. To turn off the lamp, one must wrap their hands around the spongy beige neck and squeeze out its metaphorical life, slowly dimming the light until both object and human are literally in the dark. Designed by James Chambers, the Strangle Poise Lamp is part of a line of aggression-absorbing products intended to provide safe ways to live out fantasies planted into our minds by violent films.

Pondering this dark-humored piece and faced with my own perhaps naïve image of robots as helpful companions, I was reminded of Nicholas Negroponte’s ethical robot in his book Architecture Machine: Toward a More Human Architecture. The ethical robot, in this particular robot-architecture fantasy, serves as the mechanism closing the “gap that exists between the scale of the mass and the scale of the individual, the scale of the city and the scale of the room.” Ethical robots customize details such as heating, lighting, furniture and wall configuration to suit individual needs while simultaneously accommodating the collective energy, space and infrastructural needs of the city. Negroponte calls this vision “environmental humanism” which he describes as “attainable in cooperation with machines that have been thought to be inhuman devices but in fact are devices that can respond intelligently to the tiny, individual constantly changing bits of information that reflect the identity of each urbanite as well as the coherence of the city.”

I began to imagine a version of Negroponte’s environmental humanism sprinkled with the violence-absorbing functions of the Strangle Poise Lamp. What if walls were designed to scream when punched, highway barriers to be crashed into, and light switches to be slapped in the face? Inversely, what if sofas were designed to purr when stroked, doors were to give hugs, light switches to be tenderly caressed? Could this personification of architecture through robotics provide a positive therapeutic effect on its inhabitants? Could it be used to elicit actions that would placate aggression? Or act as training devices for showing affection? Or would it create a dystopia where violent behavior is ever-escalating? Where machine environments fuel individual aggression by providing a platforms for playing out destructive fantasies?

As this daydream receded, I stood there facing the Strangle Poise Lamp and became filled with an overwhelming desire to reach out and strangle it. Disappointingly, as interaction with the “interactive art pieces” was prohibited, I cannot report on whether strangling the lamp fueled or placated my aggression. Nonetheless, whether therapeutic or dystopian, I was impressed with the lamp’s ability to induce in me desire to perform a not only a specific action, but a specific symbolic action (the metaphorical strangle) that through representation takes on greater meaning than just squeezing a piece of sponge. This personal but hard evidence (that programmed behaviors in inanimate objects can induce the human performance of symbolic actions) coupled with the possibility of a future with an increasing number of robotically controlled environments, served as a note-to-self that careful consideration of metaphor during the implementation of technology is a good starting point to avoiding potential dystopia.

On a sunny afternoon in July, I found myself in a dark back room at Eyebeam Art and Technology Center hunched over an old 3D printer under a staircase, casually making conversation with a talkative technician while troubleshooting plastic cartridge problems. Trying to entertain myself as he worked, I began poking my way through a box of abandoned 3D prints (mostly robot figurines, broken spaceships and random examples of Euclidean geometry) while he began listing in detail the various things people had printed in the past. As I put down the box, he announced, as if delivering a punch line, “…and the last artist who used this 3D printer was a cancer patient. She and her husband printed tumors based on MRI scans and made them into jewelry.” That evening, I proceeded to search the internet for this project; my first glimpse of the shiny golden tumor replica on the Object Breast Cancer website by artist duo caraballo-farman (Leonor Caraballo and Abou Farman), truly stunned me. The delicate necklaces, charms, pendants, desktop objects and worry beads, intended to be a “direct and innovative way of confronting the aftermath of a disease” were made to reflect the artists’ belief that “representations can have powerful psychological and social effects”. Developed with the assistance of radiologists at Weill Cornell and NYU Langone Medical Center, these beautiful objects serve a dual purpose of “facilitating dialogue and bringing attention to the importance of medical imaging and early detection.”

As I clicked through the various amulet materials – gold-plated, silver, black rhodium – admiring the complexity of the biomorphic contours, I couldn’t help but notice its shocking resemblance in form to the urban visionary project titled I’ve Heard About (a fat, flat growing urban experiment) by the architecture firm R&Sie(n). I’ve Heard About is a city-scale expression of an “ever-emerging shifting and above all fragile sociality” described by R&Sie(n) as follows:

“I’ve Heard About is an urban structure made quite literally of contingent secretions. Its architecture is based on the principles of random growth and permanent incompletion. It develops by successive scenarios, without planning and without the authority of a pre-established plan. Its physical composition renders the community’s political structure visible.”

Unlike Object Breast Cancer which determines its shape through the use of medical scanning technology, the constantly changing form of I’ve Heard About is generated through “growth scripts, open algorithms, that remain permeable not only to human expressions… but also to the most discrete data…”. Designed to be built through the a speculative computer driven construction method called Contour Crafting – a mega-scale 3D printer based on the technology invented by Behrokh Khoshnevis – I’ve Heard About remains in constant state of transformation through growth and necrosis:

“Growth is based on negotiations between neighbours and other residents, and at the same time subjected to collective constraints (accessibility and structural contradictions). Section by section, the raw materials of the habitats undergo necrosis every ten years to avoid an overly permanent occupation and attendant sense of individual ownership”

I begin to imagine a version of I’ve Heard About infused with the sophisticated scanning technology used in Object Breast Cancer. What if the curve of a chaise lounge was based on the actual contour of a lover’s body? What if a doorknob was based on the precise curves of a deceased family member’s hand? What if a window was in the precise shape of a snowflake that fell on the day one’s child was born? What if the architecture of the Breast Cancer Coalition was an inhabitable version of an Object Breast Cancer tumor? What if the places we live were built from 3D printed collages of scan things meaningful to us, visible and invisible, frozen in time? Would these inhabitable three-dimensional photographs, these architecture-sized snapshots of constant change have a positive therapeutic effect on its occupants? Would they induce moments of meaningful reflection? Would these moments help us come to terms with our existence? Or would they trap us in our own nostalgia and sentimentality?

As this daydream receded, scrolling through the Object Breast Cancer amulets I thought about my mother who is a recovered breast cancer survivor. Looking at the gold amulet on the screen, I was reminded of the importance of never taking for granted the time we have to be alive. The capacity of this metallic coral to have induced in me this reminder was compelling evidence that technological process (in this case, the process of precision scanning and rapid prototyping) can be an extremely effective conduit for transferring the meaning embodied in the original to the replica. In context of the possibility of a 3D printed future city like I’ve Heard About, ever-changing in constant growth and necrosis, it became clear to me that there likely would be some things worth scanning and some things not, some things worth printing to last a year and some things worth printing to last 1000 years. This served as a note-to-self that to avoid nostalgic traps, careful consideration must be exercised in determining what is meaningful enough to (so to speak) set in stone.

Model from I’ve Heard About (a flat, fat growing urban experiment) by R&Sie(n) with Benoit Durandin (2005)