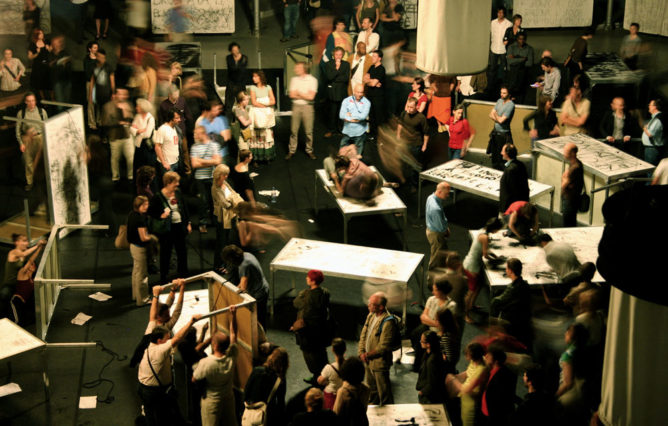 Today’s essay has been written by Hiroko Nakatani in a way that allies scientific rigorousness and the subjectivity of an architect who finds in these experiments, a way to re-introduce the notion of the body in architecture. Starting from the Spinozist assessment that body and mind cannot be separated, Hiroko then overtakes a short inventory of scientific experiments that confirms such an immanent reading of the living. As a conclusion, she quotes Shusaku Arakawa -who she knows well for having worked with him as well as Madeline Gins for two years of her life- saying that a human owns thousands of brains in and out of his (her) body. Such a manifesto is of course deeply related to the body’s environment and therefore the architecture that surrounds it. Understanding this approach is what Hiroko proposes in the following paper:

The object of the idea constituting a human mind is the corresponding body, or a certain mode of extension that actually exists, and nothing else.  (Baruch Spinoza, Ethics, part 2, proposition 11, New York: Penguin Classics, 2005.)

In this short essay, I willconnect scientists from five fields through Spinoza’s concept of mind and body in order to reveal the importance of the body, especially in relation to spatial design. Spinoza’s philosophy states that body and mind exist in parallel with each other. Spinoza says that without perception through the body there is no mind, and that this limited mind contained in a body, with skin as its boundary, is part of the infinite intellect. In turn, the infinite intellect allows individuals to explore thinking what one experiences with one’s body.

Biochemist, Rudolph Schoenheimer (1889-1942) focused on the essential role of the body in providing input for the mind, what he called“dynamic state of body constituents.” His experiment consisted in feeding amino acid-marked food to adult mice. After three days, he found that the mice’s excretions were almost entirely non-marked materials. The marked materials were found inside the body. What it says is that, very quickly, food became part of mice’s body and also that some part of the body became waste. 98% of our body’s matter changes in one year. Materially, we are the same as the food we had today, as dynamic as water that travels from the body to the river, to another animal’s body and so on. Our body is continuously changing, dissolving and taking part in the material world. Although there are different scales of time in its process, the principle of continuous flow is the same in the entire living/non-living world, whether at a peak in the desert or in the chair where you are sitting right now. To see it from Spinoza’s view, perception through body is an extension of mind. What if we take into account that the mind now keeps changing its components, as an infinite cycle of material recomposes into the infinite intellect?

What is your brain doing right now while it is reading? Information goes into the brain but doesn’t come out. What happens to it? Your behaviors at the moment are probably basic— such as breathing and eye movements— yet, as you are aware, your brain is doing a lot more than that as you read and understand these words. (Jeff Hawkins, On Intelligence, New York: St. Martin’s Griffin, 2005.)

The constant interaction between outside of our body and its inside is not limited to our material body; it also concerns our mind. In 1992, a group of neurophysiologists including Giacomo Rizzolatti at University of Parma in Italy identified a neuron in monkeys that is activated when they copy some other monkey’s and/or people’s actions such as holding up a cup. They named it the mirror neuron. The mirror neuron is a series of reactions in our brain and in the brain of some other mammals that copy some other animal’s activity both consciously and unconsciously. For example, when the person next to you yawns, you feel like you want to yawn as well. It is said empathy is an example of the mirror neuron’s operation. If animals keep copying each other constantly, the border line of one mind starts to disappear and dissolve. Our minds are in a sense a part of the environment, just as our bodies. The body itself is a limited entity if you look at a single moment; however, we keep exchanging our body through time. We have not push the possibilities of our body on a daily basis, as much as I we do with mind. It seems that the body is left in the past, while the mind is subjected to the speed of radical acceleration of connectivity. Nowadays, a voice can reach to the other side of the world as fast as you speak to someone next to you. People share their interests and gather, and copy their minds with or without knowing it. Sometimes, this shapes the world. But, what about the body? Why don’t we explore alternate conditions of our bodies like we do for our mind?

Here, I would like to introduce three extreme examples of explorations of the limits of the body. The first is a tomato plant that makes me think of hidden potential of a living thing. Shown at the International Exposition, Tsukuba, Japan, in 1985, it was grown from a seed by the botanist Shigeo Nomura. He used no high-tech genetic engineering or chemicals. He simply gave the plant enough water and air. The key was that he did not use soil: his technique consisted in growing tomatoes without allowing them to consume some of the energy they absorb to produce. He let tomatoes’ bodies free from stress: this method is called hyponica. He said in an interview, “I just helped what tomatoes want to do.” This implies that any living thing has potential that has not quite been exercised yet. Like he brought tomato’s hidden potential to life, we might be able to demonstrate our hidden possibility of life into some other ways, by observing our life carefully. There are many things that we have not tried or questioned about our environment. Is there anything that we believe is“normal” which is not at all normal?

The second example is complementary in that it shows potential discovered by limiting the environment. Kaspar Hauser, a boy who lived in 1812-1833 Germany, lived in a darkened cell about two meters long, one meter wide, and one and a half meter high with no social contact. When he was found at age 16, he could not speak any language or recognize himself in a mirror. Kaspar could not eat meat, since someone unknown gave him only bread and water throughout his life. On the other hand, his ability of perception was extraordinary compared with human beings who grow up in our environment. He could recognize colors in darkness, and distinguish iron from brass without seeing them. He could also recognize if there is prey in a spider web without looking at it. However, his sharp perception diminished as soon as he got used to living in our environment. Living in a certain way, aren’t we ignoring what we could do?

The two previous two examples were about how environment changes body, and next shows how body can acquire new perceptions. We can train ourselves to develop new perceptions. So far, the mirror neuron was identified only for sight and sound; however, it is not difficult to imagine that there exist mirror neurons related to all the other perceptions, especially when we look at Paul Bach-y-Rita’s research. Bach-y-Rita (1934-2006) was an American neuroscientist. He made a device for blind people to wear on their tongue. A visual pattern is created through the device, made with thousands of small needles. Capturing this visual information through the device, the subjects were able to see things with their tongue. After some training, they learned to open doors and pick up a glass of water. A very interesting point of this research is the fact that when the subjects were wearing the device, they were using a part of brain that is usually used for seeing things — not functioning in them since they became blind. By using touch, we can develop a part of brain that is used for sight. This reminds me of the artist Shusaku Arakawa, who said that humans have thousands of brains within and outside their bodies.

As we exchange our body as materials, and as we unconsciously exchange the information with others, there is no clear boundary between body and mind. We could be much freer from our body by accelerating its connectivity. Architects did not develop the environment for our body that exchanges as much as the engineers who built the systems and devices that allow us to exchange information between our minds. As Spinoza said, we should never leave our body behind; we need to take our body back, through attempts at new reconfiguration of the body.

Special thanks to Dorian G. Stone