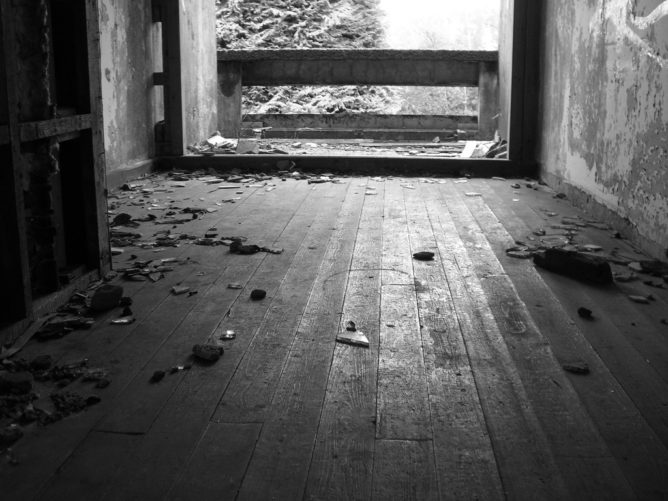 This week’s guest writer is Claire Jamieson whose student project Eternally Yours had been published on this blog (on boiteaoutils actually) a few years ago. She is now a PhD candidate at the Royal College of Arts in London and is absorbed in the relationship that literature establishes with architecture and vice versa. In the following essay, The Possible Worlds of Architecture, she gives us a useful preview to this question by firstly establishing the bases of such research (architecture & narratives) and then by focusing on this same relationship within the novella Sanctuary by Brian Dillon (2011). I have to confess that I am not at all familiar with this author but it probably comes as fresh air for some of my readers who might feel claustrophobic by my repetitive personal references! In any case, this essay today  is expedient as the first event of Archipelagos next week will be around literature and can thus constitute as good entrance door for such discussion.

The Funambulist Papers 15 /// The Possible Worlds of Architecture

“A hand rests for a moment on a parapet above the central courtyard, traces the curve of a thin metal banister that spirals deep inside the main block, and holds back the branches covering the entrance to an outlying building. Heavy boots kick aside plaster and glass to test floorboards in the half dark, and the place starts to reveal itself to a new and fearless gaze.”[1]

We are natural storytellers. It is highly likely[2], that our storytelling abilities evolved with language and human culture – and that there is something in our very nature that compels us to communicate using stories.  Some have even gone so far as to suggest that language evolved as a response to the need to tell stories[3]. The justification for this lies in the notion that a story or narrative is, in essence, a construction of the mind, and thus requires the complex qualities of language to communicate it – being that it is not sensory.  But what constitutes a story, and what gives language primacy over other modes of representation, such as the visual, in communicating them?

The largely agreed definition of a story is that of a “mental image”[4] with four key constituents. Firstly, it must have a spatial constituent: a setting inhabited by people (or creatures) and things – in other words, a ‘world’. Secondly, it must have a temporal constituent, so that the ‘world’ undergoes changes, with events occurring to cause them. The third constituent is mental – the existents of the ‘world’ must have a mental consciousness and react to those changes and events. Finally, a story must have a formal or pragmatic constituent, that is to say closure and meaningfulness (though this is a rather modernist requirement). Of these four constituents, it is the temporal and mental that pose visual modes of representation the most problems – after all an image can very well depict a spatial setting and convey meaning – but when it comes to the causal aspect of temporality, and the mental expression of emotions and intents, it can fall short to language.

For a form of production such as architecture, which deals first and foremost in the image, communicating a complex narrative through its traditional modes of representation can prove problematic. For Lefebvre, the image quite literally “kills”[5] the imagination, reducing the richness of lived experience to the fetish of the one-liner.  It could certainly be said that the traditional architectural drawing struggles to communicate phenomenological intelligence, after all, its mainstay is to prevent misunderstanding and inhibit dual readings. Indeed, Walter Benjamin identifies the essential characteristic of an architectural drawing is that “…it does not take a pictorial detour.”[6] Equally, the three-dimensional renderings of the 21st century depict an environment so unflawed and seemingly real, that little interpretation is possible, or perhaps desired.  It seems that the visual can suffer from the inability to provide what literary theorists call “gaps”[7] – these are the unwritten spaces of the text which allow the reader to exercise their own imagination: filling in the gaps. A visual representation can be guilty of giving the viewer too much information, shutting down the imagination’s ability to conjure a more elaborate narrative.

If we are to believe that: “The real craftsmanship in architecture is the crafting of a good story…”[8], might the architect look towards the literary to evoke unfolding spatial narratives and “furnished”[9] worlds?

The fictional world of the text has a peculiar relationship with the actual world. Paradoxically, it is able to delve deeply into the reality of spaces and places – exposing the contradictory, the complicated, the emotional and the lived quality of space.  In this sense, the unreal provides a means to better understand the real, or perhaps the potential of the real. Literary fictional narratives move us from projecting measurable and predictable requirements, to imagining an infinity of possible worlds.

Possible-worlds semantics goes some way to describe the complex position of the fictional text within the actual world, providing a framework to analyse the diverse relationships fiction has with reality. This frame of thinking considers the fictional worlds of literature to be “sovereign realms of possibilia.”[10] – that is, worlds in their own right, with their own sets of rules and laws of reality. The model also asserts that all possible worlds are of the same ontological nature, so fictional entities such as characters, places, things, events, can coexist and interact. But possible-worlds are not just flights of fancy or stories told for entertainment. At their very core, they are constructs for thought and discourse – they are testing grounds for ideas, wishes and fantasies:

“We explore the plurality of possibilia to find out a suitable model for realia.”[11]

In the possible-world of Brian Dillon’s “Sanctuary”[12], Cardross Seminary in Glasgow, Scotland is a character to be interacted with – blending our perceptions of the place with the people and memories whose narrative is enacted through it:

“She rises to her feet, crying, and makes her way back through the spectral doorway, and into the spiral staircase. The steps are now slick with rain; a fine mist has begun to fall on the seminary, and at the bottom of the stairs she turns towards the solidity of the main block once more.”[13]

The novella’s narrative centres around the real, and ruined, seminary – a strangely enigmatic figure who becomes at once a setting for action, and symbolic of the differing vital force driving the two central characters. An unnamed woman, whose debilitating migraines seem echoed in the crumbling and wild evocation of decay, is desperately searching for her missing lover, hopelessly trying to make sense of the fragments left in his wake:

“It is unclear what relationship this curve, as it tightens towards the interior, bears to the tower-like structure she encountered outside. For the first time, she begins to feel properly afraid in the vast and thus far silent complex, where she knows he has been. She looks back towards the southern end of the building, which the sun has so penetrated that what is left of wooden fixtures now glows fiercely, and thin streaks of yellow and orange have begun to rake the filthy floor.”[14]

He is described as an uninhibited and wandering artist, full of “awkwardness and curiosity”[15]; while she pursues control and meaning, he yearns for the opposite, the indeterminate…the fluke:

“…much of his time was spent trying to corral the mental and physical space in which these oblique and happenstance turns might take place. This is what he thought he had found at the seminary. He wanted to explore the gaps in the stories of this place and others like it, the things glimpsed out of the corner of one’s eye while looking head-on at the object itself.”[16]

This extract not only serves to describe a character, but also suggests something about the nature of stories and the literary gaps mentioned earlier. The narratives he (and we) seeks are not those found by full-frontal representations of buildings, of unambiguous images that have filled in all the gaps – but are found through modes of exploration such as the literary text, which allow us to look  “…out of the corner of one’s eye…”[17].

A gap in Sanctuary’s narrative is the missing man himself. Though not present in the text as a voice, he is still somehow vitally present in the extended descriptions of the ruins that puncture the text throughout the novella. These evocations, combined with the female character’s memories of him, project a sense of him in the imagination of the reader in a way more vital than had he been given a voice. The building is far more than a setting in this sense, and transforms the text into what one could consider an architectural (or architecture) fiction:

“Instead of hidden spaces, the thicknesses of walls and beams and pillars appear themselves to possess a blind and solid inside, where nonetheless a kind of action is taking place. Tiny voids swell and contract like the minute chambers of lungs.”[18]

This might be a way of writing with, by, or through a building, which attempts to delve beyond the traditional relationship between setting, characters and narrative to one more akin to reality – where the boundaries between these entities are blurred and overlapping. A building cannot be characterised fully without the stories, memories and lives whose fragments are embedded within them. A fiction such as “Sanctuary” which constructs such a world allows the reader to make the spaces of the text part of their own reality, thus appropriating and discovering it in the same way they would the actual world.

The possible-worlds of the literary architectural narrative suggest a way of enriching and challenging how we think about and make architecture.  Fictional writing and associated narrative techniques might be effectively embedded in architectural production to enable architects to propose spatial solutions which are suggestive of a richer social, emotional and experiential occupation.

“But while daylight discovers the intricacies of the seminary complex, the sheltered interior of the sanctuary spiral will stay cold and gray. Not until the sun has reached its highest point will light fall into the well that the curved walls describe around the concrete altar and the weeds that spring up at its base. At length, all shadows vanish from the open interior of the tower’s summit save for a cool lozenge of darkness here in the lee of the altar.”[19]

[2] Though not proven – this is discussed in: Ryan, Marie-Laure: ‘Narration in Various Media’, Paragraph 23. In: Hühn, Peter et al. (eds.): The Living Handbook of Narratology, Hamburg: Hamburg University Press.