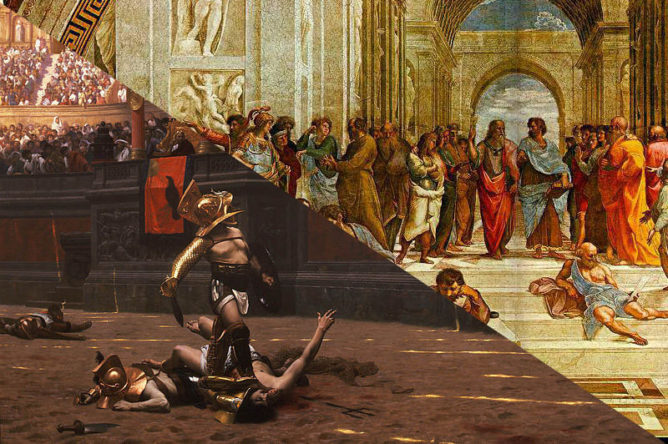 Regular readers of the Funambulist are probably familiar with Eduardo McIntosh‘s work which has been regurlarly published here (see below). Today, he gives us a sort of editorial -as we say in French,  un billet d’humeur– about his (shared) vision of the current state of Architectural Academia and more globally, the current state of dialectic in our daily lives. In order to do so, he chose two architectural antagonistic paradigms, the agora and the arena (which is frankly funny when you know that he spend his days at work designing stadiums !) as a clear opposition between two modes of discussion: one that questions problems -in the deleuzian sense- and one that simply register in the recipes of the spectacular -in the Debordian sense.

Although, his target is not that much reduced, he uses the example of a well known movement that currently rules a whole branch of the Architectural Education that he names “the cool kids” (one could have call them the merchants of cool) i.e. people who uses the word experimental as an allibi to justify their lack of criticality. Of course, it seems important to observe that one should be careful here not to confuse architects who are continuously producing efforts to go deeper within a field of research from the others who more or less successfully surf the wave that the formers have allow to exist.

Incidently I had a conversation very recently with Wes Jones (soon to be published) that partially evoked this problem. When I talked about the notion of speculation, he reacted by affirming a strong defiance for such a notion. Speculation and experimentation can make people’s life miserable he said. Eventually we both agreed on the fact that indeed, it can, and therefore this notion of speculation, far from being the same “experimentation” that is attacked in the following text, has to be understood, not anymore in the usual transcendental scheme of the architect/god experimenting on people/guinea pigs but rather in an immanent scheme that accepts the risk of its own speculation, and integrate it within the design in a continuous dialogue with the future users of this architecture.
Projects by Eduardo McIntosh on The Funambulist:
– Sadian Architecture / An architectural narrative
– Imagining Recovery
– Autonomous living units
– MANIFESTO

The Funambulist Papers 10 /// Bread and Circus: Agorae vs. Arenas

The aim of any piece of writing is almost always to be read by as many people as possible, to be an instrument to spread an idea. Nevertheless since the times we live in influence us to disregard anything that doesn’t offer a good rate of effort/reward form the onset, I will start this piece by telling a little bit of academic related gossip (as sometimes it seems like the trivial is for some of us the most significant).

Not so long ago I was generously offered the opportunity to help instructing a unit at one of the most relevant schools of architecture in the world.  Even though my role was only that of teaching digital (Maya, Grasshopper) and electronic (Arduino) techniques, I felt really positive about being involved with an institution of such renown. To cut the story short, after a full academic year of a heart breaking lack of direction, architectural knowledge and all around educational skill from the part of the tutors, on the last private review prior to the finals, the unit master said in a desperate tone to myself in front of the students: “Ed, please teach the students how to blur their images in photoshop as the majority of them do not have anything resembling a project,  so just take a site, put a volume and blur the image.”  All this after 9 painful months of stumbling around trying to teach them this-and-that technique at the ever-changing whim of the tutor (who by the way is now lecturing in every symposium ranging from ‘green-architecture’, to digital design techniques, computer aided manufacturing and whatever seems to be the flavour of the day)

At that point (and after running my own unit for 3 years at another university) a strong sense of anxiety about the current state of architectural education arose in me. As I don’t think this tragic-comic condition of shallowness and depletion is limited to academia or architecture, I will try to use this essay to elaborate on some ideas that will tend to be more related to socio-political and economic circumstances. The above story about the ‘blurring of images’ perfectly describes the scenario (again not only within architecture or architectural education but in every aspect of our lives) in which I think we currently live. A modus operandi in which quick entertainment, smoke and mirrors, images and puppet shows (like the ones Plato descried long ago) are preferred to the ‘evil’ of effort, close reading, dedication and substance.  As Diesel says: ‘BE STUPID’

The main preoccupation of this essay is the choice we face on a daily basis between being distracted by the constant puppet shows fed by us from every direction versus being focused and engaging in discussions regarding the true affairs that surround us. But more importantly, as architects, how can we use architectural production to correct this lack of engagement and disinterest for civil duty.

Bread and Circus is a term that refers to the practice of the ruling class during the decline of the Roman Empire to sedate and appease the population by offering them the blood filed spectacle of the games in order to distract them away from the important political issues going at the time. The architectural representation, container and physical enabler of this condition being of course, the Coliseum in Rome. Thus it could be argued that the Coliseum was a magnificent work of engineering and architecture whose main purpose was to create a distraction at an urban scale that allowed the elite of Rome to do as they pleased uncontested by the population.   In stark contrast the Greek agora would be what this essay is advocating for in terms of an architectural device that encourages discussion about key issues of our society between us all. Nevertheless these two typologies are not meant to be taken literally or narrowly, they just serve for now as historical precedents that prove that architectural production can be used to affect or to a certain degree even to control the course and development of society. Moreover, these two politically opposed typological examples might help us to define two caricatures of polar extreme characters within the architectural milieu: The ‘cool kids’ and the grumpy outcasts.

Ever since the inevitable rise in prominence and pervasive presence of digital tools in our profession digitalism has become the number one life raft for the lazy cool kids. See, the cool kids (some of them old enough to have grandkids) learn from early on that the best way to get some sort of recognition amongst their peers WITHOUT actually designing a thing is to resort to the use of terms and positions which are obscure to their fellow architects.  Therefore we are witnesses today of the weird phenomenon within our profession of trying to come up every Monday morning with a new architectural theory based on subjects as diverse as Bio-mimicry, Genetic Algorithms, Parametrics, Topology, etc (funnily, when architects speak of topology they usually really mean topography). Digital techniques, with a few key strokes, help to create a smoke curtain for the charlatans to hide behind while they spew the few technical jargon they have memorized from Wikipedia or Wolfram’s math.  I suspect that the emulation of biological systems to find architectural solutions (bio-mimicry) is a millennia old architectural approach, so why all the fuzz now? Aren’t Genetic Algorithms rule based systems which at their core operate in the same way any architect would do now or 10.000 years ago by…..following rules? Isn’t Parametric referring to an organizational model that keeps the relations of parts within the system constant independent of the fluctuation of the input parameters? Much in the same way every piece of architecture to different degrees has been conceived since time immemorial? (For those needing a literal, clear graphic example please see the dome of the church of San Carlo Alle Quattro Fontane).  In essence, are we not wasting our time (especially during the formation of new architects during their academic years) by re-inventing the wheel instead of talking more about the truly constituent elements of an architectural piece, namely: Space, Structure, Tectonics, Materiality and Programme, and especially the interrelations and cross referencing of these constituent elements?

Now, some cool kids will argue in their defence that they are being ‘experimental’: They are one day engaged in ‘digital from finding’ (playing with maya, processing, or grasshopper), then the next on computer aided manufacturing or ‘fabricating’, and after that they are creating a responsive system with sensors and actuators. The sad but very telling case is that after more than two decades of excuses, the best results of these experimental endeavours are merely cladding systems or in the most ambitious and resource-burning publicity stunt efforts, lumps of self-referential ectoplasm that have a spectral shallowness to them. After all these years and all these exciting pseudo-scientific sorcery being thrown around it seems that still the level of architectural accomplishment of the vast majority of recent works pales in comparison to what Wright, Le Corbusier, Khan, Scarpa, Utzon, and others did years ago.  Does this mean that the more resources we have the worse architects we become? Or does it mean that, as with the slaves being butchered in the Coliseum, all this biomimetics, genetics, parametrics, and other magic potions are just distractions? And that we should try to be more like the grumpy kids, and not be so preoccupied about trying to be perceived as cool but rather be more like the old Greeks at the Agora and really engage in an elucidatory discussion about our projects?

A mirror of society

But let us not be concerned with architects too much, especially when there are people around the world suffering unimaginable pain, when the financial gap between the wealthy and the poor grows every day and social injustice runs rampant without the vast majority of us giving a damn. At the end of the day, what can architecture do against the new feudal lords that govern our governors (Monsanto, Halliburton, JP Morgan, Goldman Sachs, etc, etc)? Not much truly.  But it’s interesting to draw a parallel between the Roman Circus of current architectural practice and the Roman Circus which is our everyday life.  To exemplify this point, let me finish with another anecdotic story. A couple of days ago during a chat amongst colleagues, one of my co-workers mentioned that he had read that Libyan expats had offered a bounty for Colonel Gadhafi’s head. He then asked to us all if this was ‘legal’, to which I replied sarcastically,  of course it is legal if you are a tyrant who’s not from the ‘west’, if you are a tyrant from the west,  then no,  this would be blasphemous.  As the discussion got more heated up and people in the group were expressing their feeling that putting money on someone’s head is an inhuman act not matter who’s head is it,  I reminded them about the recent assassination of Osama Bin Laden. At this point the Agora was starting to be filled with the beginnings of an interesting exchange of ideas in regards to the subject…until another colleague silenced us all and broke up our discussion by saying: ‘even more importantly, is it true Steve Jobs stepped down from Apple?’…bye bye Agora, hello Circus!