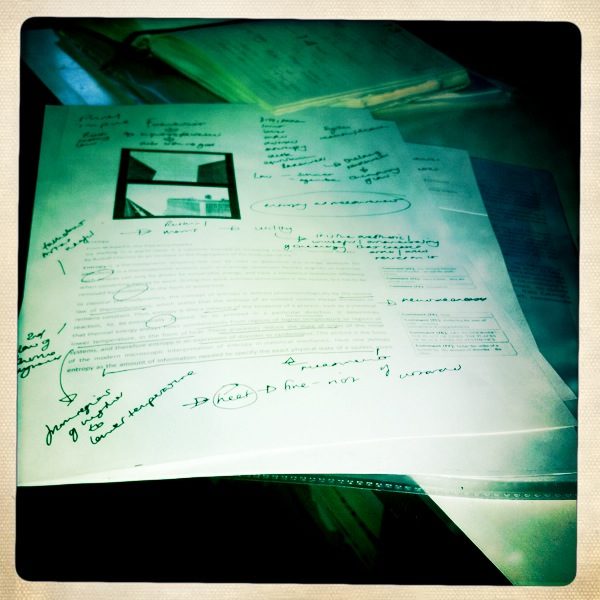 This week, I am very honored and pleased to publish the guest writer essay written by Lucy Finchett-Maddock, Doctor from the Birbeck School of Law in London whose fantastic essay on the notion of naughtiness in Burroughs’ literature has been already published on the Funambulist.
In the following essay, Entropy, Law, and Funambulism (she was kind enough to integrate the figure of the funambulist as an emancipating paradigm that this blog celebrates) Lucy defines the entropy as the unusefulness and use a thermodynamic metaphor to elaborate about the current social situation in England, in general but also more specifically in the context of the recent insurgency. It seems to me that the term “unuseful” here has to be understood in the contradiction it expresses against a certain expectation and a given environment rather than the word “useless” that would positively brings a status as an alternative to the system’s efficiency.
As a complement to her essay, I would recommend the best article I have read about those English riots by William Wall on Critical Legal Thinking on which Lucy also writes regularly.

This piece is more reminiscent of a stream of consciousness than a discussion on entropy, analogising the intriguing applicability of thermodynamism in relation to understandings of law, lines, and extant resistances.

To speak of exerted energy, that which is wasted in the machinations of a seemingly closed system, is prescient in a time of disruption and apoplexia.  Beyond the aesthetic nerve that enticed the writing of this piece on entropy, there are legal and political analogies and extant anxieties, that cast an overwhelming familiarity to this encounter with thermodynamic processes.  Entropy is a measurement, a method of quantifying energy that is available for unuseful work within a thermodynamic process.  Without involving the reader entirely with the science or statistical mechanics of entropy (and within the bounds of what this non-scientific author knows of the phenomena herself), entropy is an accumulated inefficient resource that gathers as a machine or engine has reached its ‘theoretical maximum efficiency’, the energy thus having to be exorcised, or ‘dissipated’, as a form of waste heat.

Law, like a mechanical system that has a ceiling to its useful quantum of energy, has limits too.  Law operates as a system of frontiers, and has moments of change and transformation that are produced with the external or internal occurrence of events.  Whether these events come from within or outside its legal demarcations, it reaches a point where there are waste subjects that act as the collateral of precedents and landmark cases.  Cases offer a clean and detached way of dealing with subjects, a categorisation that allows the human(s) involved to be lobotomised by law’s pompous casuistry.

Entropy, is whereby at a given juncture in a manoeuvre of time, a limit of worthy energy is used, and from that point onwards, the forces are irreversibly non-utilitarian.  As soon as one hears the term utility and useless, depictions of heads downward-looking in hooded tops, abandoned youth clubs and unrequited dreams quarterised into bleeding fists cradling expensive stolen shoes.  Here is where the biopolitics of a planetary system in the grip of crises, tantalises the variables of resistance.  It is at this given juncture of coordinates, those who are forgotten, are obliged to force themselves in to the ether’s tranquilised conscience.  It is here where those who are excluded from legal and political advocacy, manifest polyps of societal entropy as they exert their ‘dropout’ souls to highlight the system’s inefficiency.

The word ‘chav’ must never be uttered again.

Their anger enacts a coagulation of the system reaching outside the ramparts of itself, and yet they remain within its categorical property at the same time, by revealing themselves as capitalism’s externalised waste product.  They, like entropy, are the quantifiers of disorder within our supposed structure of order, whereby the normativity of the system is measured by its very exception – that which is indeed, not the norm.

Without having to jump too far into one’s juridical imagination, this smacks of a Schmittean or Agambean ‘state of exception’, whereby the rule itself is governed by its moments of removal, such as the functioning of prerogative or reserve powers within a constitutional configuration.  The maximum efficiency, or limit of a system, is reminiscent of the threshold, where the legal decision or rule is based upon the existence of those who are excluded from the rights enshrined within law, those who may be killed but not sacrificed (bare life), and yet they are the very heart of the law at the same time.  It is where the project of the ‘proper’ and purity, unravels within law, and its entropic impurity is revealed.  ‘Proper’ is the ability to exclude others:  “Positive law itself is also conceptually based upon an originating exclusion, decision, or splitting which establishes a realm of law and a realm of that which is other to law.”[1]  Here are the lines, the liminality where entropy is produced, where it resides and flourishes.   Just like the architect’s medium as the reflection on the line, one trajectory becomes two through a divisive splice.  Entropy is the original funambulist, the tight-rope walker who within the act of walking on the line, encounters emancipation.

An efficient system produces less entropy than that of one which is inefficient.  If a system is in the grip of crisis, one can imagine mass polyps and plumes of force that are not work-consigned, operating as a reaction to the balance or imbalance of their surrounding environment.  Its manifestation is indicative of constraint, and a structure that is not functioning to its maximum potential, some parts benefiting more from its design than others.  Given the wanton fury that has surfaced in the United Kingdom, it is not difficult to see that here is a malfunctioning system, one whose subtlety of systemic violence, has been answered with the eruption physical violence in turn, an infernal exasperation and charge of mass retribution.  These are the polyps of entropic mistrust and disenchantment emanating from those who are secreted and stigmatised by the mechanics of a politics of gluttony exampled from above.  Here forms the entropy of the forgotten homo sacer of consumerism, those who the structures of society erase by determining them as the exception, and yet they are the very rule themselves – the expelled that facilitate the existence of the very few.

Entropic changes take place in heat, whether smouldering businesses or not.  Within a mechanical organism, entropy never decreases, and thus there is always an overlap, an ever-growing appendage of ‘waste’ burning, that grows in a parasitic dissatisfaction, irreversible discontent within a failing organism.  There will always be the unuseful, non-utilitarian product:  that which is either the machine itself, or what the machine seeks to create, and vicariously manifests as a consequence.  It is where limits are reached, boundaries created, and the quagmire within which those who risk their being, reside.  But what does this apocalyptic non-usefulness mean?  It summons the relevance of Ruskin or Morris and their belief in utility in art, and yet aren’t those redundant, ornate, unplanned entropies, the stuff of most beauty?  Aren’t we overlooking disorderly disruptions and their culprits and assuming their lack?

When in actual fact they are our ignored projection of now and the fundamental direction of our being.