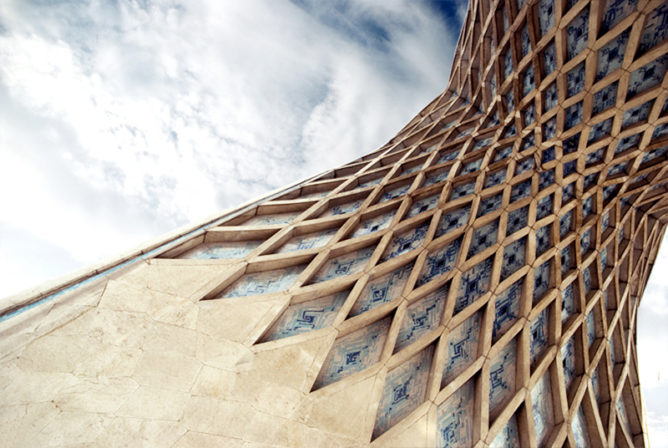 This week’s guest writer’s essay comes from my friend Biayna Bogosian who started to work on this article a long time ago and eventually achieved it today. In it, she gives a very interesting Deleuzian reading of the Azadi Tower in Tehran, built in 1971 and that can be said to be one of the first parametric building (in the contemporary computational meaning of it) ever built. Biayna revisits the principle of Persian mathematics with Deleuze‘s concept of fold elaborated through Leibniz’s work. Indeed in this mathematics, points are considered as the source of inflection of lines, therefore constituting a non-cartesian geometry that relies more on forces and folds than fixed coordinates.
Back to the Azadi Tower, of course, I cannot help but to notice the irony of the name of this tower (azadi means freedom in Persian), whether we evoke the era of its construction and its monarchic regime ruled by the Shah or our current times during which the people’s voice has been shut down from a counter-revolutionary government that has of the revolution only the official name. Ironic, then, or rather promising since the 1979 revolution actually occurred and one could hope that the Green Revolution will eventually overcome. The Azadi Tower was in fact a gathering point during the 2009 massive protests against the usurped re-election of  Mahmoud Ahmadinejad (see the last picture of the article). As folds are the concerned notion here, one could think of this tower as ready to unfold the Deleuzian becoming  revolutionary that the people of Iran aspire to.

“Sometimes the veins in marble are the pleats of matter that surround living beings held in the mass, such that the marble tile resembles a rippling lake that teems with fish. Sometimes the veins are innate ideas in the soul, like twisted figures or powerful statues caught in the block of marble. Matter is marbled, of two different styles.” [p.4]

The Azadi Tower (Feedom Tower) is the gateway to Tehran. This 50m tall tower is located in the heart of the 15,000 sqm Azadi Square (Freedom Square) and has been the center of many cultural and political revolutions since its completion in 1971. The architecture of the tower is influenced by both pre-Islamic Persian architceture of materiality and Islamic architecture of geometry. The significance of the Azadi tower is not only in its sociopolitical presence, but also lies in the balance of the mystical and mathematical dimension of the design coupled with its process of materialization. From 1966-1971 the monument was built with 25,000 unique white marble pieces, each shape customized using a structural computer program and carved using a combination of manual and machinic operations.

Gilles Deleuze in The Fold: Leibniz and the Baroque, acknowledges that there are other kinds of folds from the East, Greek, Roman, to Classical folds; However, Deleuze believes only the Baroque trait “twists and turns its folds, pushing them to infinity, fold over fold, one upon the other… oscillating between the pleats of matter and the folds in the soul.” [p.3]

This article argues that the Azadi Tower complex is an anomaly to Deleuze’s argument in a sense that it embeds the notion of an infinite vector of movement inspired by Islamic architecture (folds in the soul), but also re-introduces traditional Persian ideas of materiality in the construction of this monument (folds in matter).

Every culture and religion has their own particular understanding of the relationship between the divine and the world. This implies a certain manner of unfolding, which informs theology, art and architecture.

The term fold in ancient Persian culture and language is often synonymous with the definition for sides of a polygon. For Instance, an octogon is referred to as an eight-folded geometry and the interior of the polygon is called its body. Translation of this definition in architecture brings great importance to the folds or the edges of space dividing geometry. The main trait of traditional Persian architecture is based on the notion of creating an earthly paradise through series of subdivided gardens, water canals, and indoor and outdoor rooms. Thus, the geometric folds become the defining borders for enfolding material differentiation. This garden design philosophy called Chahar Bagh (four gardens) has influenced the design of gardens from Taj-Mahal to Alhambra and beyond.

However, after the 8th century the notion of material articulation was overshadowed with the introduction of Islamic architecture to the Persian culture which reinforced the use of more complex geometric forms in order to create elaborate tile patterns often referred to as quasicrystals. A quasicrystal formation is based on arrangement of a set of polygons (often five to twelve sided) to create complex tiling patterns. This application of pattern intensity is rooted in the Islamic believe of transfiguration and transformation as an essential part of material life. The application of quasicrystal patterns, whether as an architectural style, textile design or calligraphy, becomes a way of representing the world around less substantial and articulated. In this notion the pattern becomes a tool for de-materialization of architecture. The scale differentiation of monocentric quasicrystal patterns on dome ceilings introduces a forced perceptual trajectory for the visitors. This focal point of pattern deformation creates a sensation of lightness in the ceiling of the space and creates the idea of arriving from geometric multiplicity to formal unity and reinforces the notion of infinity in the space.

A Deleuzian might object that Islamic art and architecture cannot be a playing field for real creativity because its purpose is to direct the worshipper toward God. But, one can argue that Deleuze’s notion of the folds in the soul inspired by Gottfried Leibniz’s theories of Monads as centers of force, are based on the idea that a fold is always influenced by a force and is constantly imposing force on to its adjacent fold. Deleuze states that, “the world must be placed in the subject in order that the subject can be for the world. This is the torsion that constitutes the fold of the world and of the soul.” [p.26] Therefore, one can argue that the same force interplay between a subject and the world could also be applied to analyzing the relationship between an elaborate quasicrystal pattern on a ceiling and an observer. This force interchange allows great deal of individual interpretation, encourages endless curiosity, and creates a perceptual and contemplative venture into the infinite for the person experiencing the space.

The main pattern inspiration for the Azadi Tower complex was the ceiling of a 17th century mosque, called Sheikh Lotf Allah Mosque, in Isfahan region of Iran. The architect of the complex, Hossein Amanat, was a 24-year-old graduate from Tehran University when he won the competition for designing a monumental tower complex in commemoration of the 2,500th anniversary of the Persian Empire.

Amanat much like many other architects in 1960-s, was very much interested in structural performance of geometric modules. He combined the organizational logic of a monocentric Islamic Patterns with the long forgotten traditional Persian architecture of substantial stone mass, as well as articulated landscaping divisions. The architecture of Azadi tower complex was as much about its heritage as it was about its modern influences and the future vision of the city.

Deleuze in talking about the fold in matter states that, “A body has a degree of hardness as well as a degree of fluidity, or that it is essentially elastic, the elastic force of bodies being the expression of the active compressive force exerted on matter.” [p.6]

Amanat utilized surrounding circulation arteries of the existing urban context as directional forceful vectors for influencing the monocentric landscaping pattern of the tower Complex. The trajectories of the circulation, much like a ripple effect, influenced the scale differentiation and articulation of marble blocks in the body of the Azadi tower.

Even though, 8,000 blocks of 6m long white marbles were utilized in the construction process, the continuity achieved by careful computation of each individual marble piece, has given the tower the nickname of ‘the tower of a draped silk’ among civilians.

The Azadi tower complex as Tehran’s main landmark, houses a national heritage museum, multiple galleries, libraries and souvenir shops that are embedded in multiple levels throughout the tower. However, all main entrances are sunken underground to enhance the circulation flow of the complex. The articulation of customized marble units then translates to fluid concrete forms that create the interior shell of the tower’s body. The transition of the Azadi tower’s exterior folds to the interior folds are much like Deleuze’s description of a Baroque costume, in which he states that, “fold in matter is broad, in distending waves, billowing and flaring, surrounding the body with its independent folds, ever-multiplying, never betraying those of the body beneath.” [p.121]

Now exactly 40 years after the Freedom tower complex’s construction, the architecture is more than ever folded into the city. It has become the city. Perhaps it is due to the fact that the tower was designed with the most utopian vision of enfolding a nation’s culture, politics, and architectural styles into one architectural body. After all Deleuze argues that folding is political in a sense that theories of curvature, movement, and point of view cannot be localized. Deleuze and Guattari state that, “Utopia is not separated from infinite movement: Utopia designates absolute deterritorialization, yet always at the critical point where the latter is attached to the relatively present milieu, and especially with forces that are the fabric of this milieu.” [95]

[1] Gilles Deleuze. The Fold: Leibniz and the Baroque. University of Minnesota Press:  December 18, 1992.