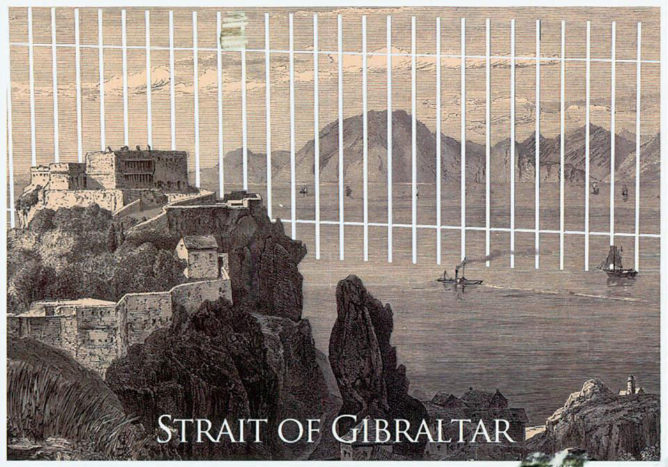 Regular readers of the Funambulist are very likely familiar with dpr-barcelona editors, Ethel Baraona Pohl and César Reyes‘ writings as we have been developing a dialogue between our different soft/hard platforms. The three of us agree to choose as an axiom that architecture can not be separated in any case from its inherent political characteristics and the following essay, Post-political Attitudes on Immigration, Utopias and the Space Between Us is a good illustration of it as it tackles the role of architecture in the problem of human migrations. In fact, in a globalized world in which the transportation of goods has been amazingly facilated to develop a worldwide market economy, humans remain the element that is being the most filtered if not prevented from national policies. From there, it is ironically symbolic that many clandestine migrants attempt to move from one territory to another in containers transporting goods (see Didier Faustino’s related project Body in Transit ). Ethel and César thus put intelligently in perspective the active participation of architecture to this political debate by refusing to consider the latter in another way than a coherent global vision of society that we can call utopia.
To be perfectly honest, I am not necessarily comfortable with all the examples they give in this regard (i.e. the NEMO project that I find extremely cynical) but those guest writers essays are exactly made in this spirit, allowing another point of view to intervene in a very unidirectional editorial line.

The Funambulist Papers 06 /// Post-political Attitudes on Immigration, Utopias and the Space Between Us

Geopolitical space has always been a conflicted and fragile topic. Borders and frontiers are changing so fast, that sometimes seems that our sociopolitical status can change from “citizen” to “immigrant” from one moment to another, or simply live under the “immigrant” status all your life. We’re getting used to words like refugees, enclaves, war, borders, limits –and the list has no end. This critical condition is not a minor problem. On the International Migration Report 2006 we can read that in 2005, there were nearly 191 million international migrants worldwide, about 3 percent of the world population, which represented a rise of 26 million since 1990. And this is one of the biggest political problems we’re facing in the current times.

In this context, we can see how the political implications of some architects had led them to design what we can call “critical utopias”. At this point, is important to remark the relationship between the concept of dystopia as a critic and utopia as an evocative new world to come. This duality was the guideline of some radical projects of the 1960s and 1970s, such as Superstudio’s Twelve Ideal Cities, their satirical vision of humanity’s search for an ideal world or Archizoom’s No-Stop City.

Pier Vittorio Aureli wrote about the possibility of architectural thought to propose an alternative idea of the city rather than simply confirming its existing condition; and Manfredo Tafuri pointed on his book Architecture and utopia: design and capitalist development:

“Architecture now undertook the task of rendering its work “political.” As a political agent the architect had to assume the task of continual invention of advanced solutions, at the most generally applicable level. In the acceptance of this task, the architect’s role as idealist became prominent.”

Recently, Joseph Grima wrote an open letter to President of the European Council about the social, cultural and political implications of a bridge between Europe and Africa across the Strait of Gibraltar, and is easily to see that this is a kind of uncomfortable proposal for such politicians inasmuch as their political ideas are based on words like “control” more than on “bridges”. Grima remarks the idea of a city in which migratory flows are not an unfortunate yet inevitable reality, but rather the mainstay of its identity. The main issue at this point is to think how to avoid that this new archipelagos or infrastructures, capable of linking two territories, to become the non-place described by Marc Augé. When Augé points that the European assumes its full meaning in relation to the distant elsewhere –formerly ‘colonial’, now ‘under-developed’–, it seems as it wasn’t wrote in 1995 but yesterday.

Recent events in Norway and the reaction of right-wing leaders are among the many examples we can mention about the great political “problem” posed by immigration, as seen by governments of developed countries. Marc Augé also recalls that all this kind of movements, all of them part of the same phenomenon, and are based on an important criterion of hyper-modernity: individuality, singularity. All these facts simply makes us think again on the importance of utopias and makes us wonder if the utopic proposals that face this conflicts are really helpful nowadays.

Walking alone through the precarious geopolitical space between Europa and Africa, by Gabriele Garavaglia. Via Domus.

“It is a city made only of exceptions, exclusions, incongruities, contradictions. If such a city is the most improbable, by reducing the number of abnormal elements, we increase the probability that the city really exists” – Italo Calvino-Invisible Cities

All we have to do now is ask some questions regarding the exclusion and violence [not only physical, but emotional] generated by the “journey” of migrant people to discover new territories, new realities; and try to relate it with our response as architects. Jean Baudrillard wrote on the book Utopia Deferred: Writings from Utopie [1967–1978]:

“The equivalent of a symbiosis between a few architects and young intellectuals effectively occurred at the end of the 1960s, but at that time, it seems to me that architecture didn’t have the façade, the surface that it has today. And since these architects were still unknown, they could take more risks in a certain way, leave their “technical” space so as to see elsewhere.”

It’s time to think if in the current times we’re acting with some political engagement while using our utopic projects to respond to the conflicts mentioned above. Following Tafuri and Aureli ideas, if architecture can be political and architects can act as political agents, we want to talk here about two projects that goes beyond the simple utopian approach to a more deep radical confrontation with the immigration problem, thinking on as a major socio-political and socio-economic change in the last twenty years.

“… we are within a new experience, which is of our times and places us in the new utopian condition; or, rather, makes us face the ‘potenza’ of utopia.” – Antonio Negri, Empire and Beyond

This potenza of utopia mentioned by Negri can be easily found in the idea behind the N.E.M.O. Project [the Northern Europe Migrants Organisation], an entreprise that enables people to illegaly migrate to the United Kingdom. This fictional project proposed an organization that will be able to end with immigration and human trafficking problems, while creating a kind of non-place in the port of Calais.

You’re able to book on-line [as seen on our ticket above], ask for a fake passport and even request English lessons during the journey. After this, the passenger arrives to a secret base located in a WW2 bunker, located near the city of Calais, where most of the migrants end-up, the facilities are only 42km away from the British coast.

The fictional essence of this project is at the same time, a hard critic to the system and how governments allow human traffic between different countries, and deny the freedom of movement that should be a civil right. Immigration polices which selectively grant freedom of movement to targeted individuals are intended to produce a net economic gain for the host country, but what about people from poor countries that are simply seeking better life opportunities?

The U.S. and Mexico border’s total length is 3,169 km [1,969 miles], according to figures given by the International Boundary and Water Commission. It is the most frequently crossed international border in the world, and this has allowed a deep archive of suspect movement across this border to be traced and tagged – specifically anchored to immigrants bodies moving north, while immigrant bodies moving south much less so. The danger of moving north across this border is not a question of politics, but vertiginous geography.

The idea of using new technologies as communication tools was present in much of the avant-garde utopias of the 1960s and 1970s. Ugo La Pietra pointed about his project Casa Telematica:

“… it becomes a center for gathering, processing and communicating information; a microstructure that can intervene in the information system by enlarging and multiplying exchanges among people, with everyone participating in the dynamics of communication.”

The use of this dynamics of communication to help immigrants to cross the border between U.S. and Mexico can be one of the most powerful ways to revisit past utopias and bring them to the present, now that we have the technologies to make this old dreams come true and help us to change the world, because as Bertold Brecht wrote, “Only the lessons of reality can teach us to transform reality.”

Dominguez uses GPS technology to to develop useful Transborder Tools for Immigrants – and allow virtual geography to mark new trails and potentially safer routes across this desert of the real. As described on the web-site, The Transborder Immigrant Tool would add a new layer of agency to this emerging virtual geography that would allow segments of global society that are usually outside of this emerging grid of hyper-geo-mapping-power to gain quick and simple access with to GPS system.

“We have no need of other worlds. We need mirrors. We don’t know what to do with other worlds.” – Stanisław Lem, Solaris

If the sixties architecture stimulates the question of the radical nature of utopian architecture, and how can it be  utopian – avoiding reality – and still be political, as Peggy Deamer pointed, one of the most interesting thoughts related with this is to define if architecture can be helpful to avoid living in a non-place or in a heterotopia. It is possible that architecture learn how to transform this other worlds in to mirrors, where people can search for their own utopia?

And as Foucault adds, “I believe that between utopias and these quite other sites, these heterotopias, there might be a sort of mixed, joint experience, which would be the mirror. The mirror is, after all, a utopia, since it is a placeless place.”

We believe that utopias can also be more than an intellectual divertimento. Designer’s creativeness should also be oriented to address real challenges faced by humankind as a result of their economic and geopolitical relationships. Given that a world with no borders is still far away from our mental framework, why not get involved in provide solutions for this huge “mobile nation” of 191 millions of inhabitants? A giant mobile mirror reminding that all of us are also immigrants, passing through this life.