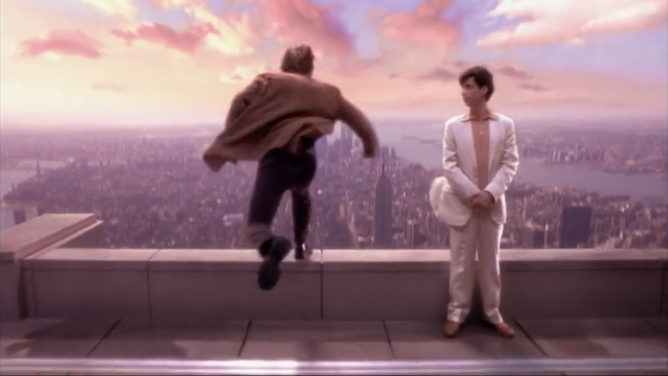 The fourth chapter of the Guest Writers Essays series is written by Fredrik Hellberg whose amazing projects at the Architectural Association have been published twice here (and one more soon to come). His Manhattan Oneirocritica was bringing to life all the glorious monuments (Gaudi, Rudolph, Superstudio etc.) that have been designed for New York yet have never been built, while his project for a Japanese Embassy in London was drawn directly on the kimono wore by its guardian.
His essay, in  a bit of personal way, has to do with Solipsism, this idea (if not syndrome) that only the thinker of this thoughts can be sure to exist (one could probably call that the Cogito Syndrome !). He therefore brings us in a small vertigo that question the notions of reality and dream.

David Aames and McCabe sit and wait in a warm wood-paneled
office, proposals in hand. A glimpse shows words like Re-
Evolve and Re-Experience, peppered with colorful photos of
simple, life-affirming portraits of everyday life. It’s
well-appointed and well-marketed organization.
McCabe regards David as the victim of a lunatic’s scam.
Injustice fuels McCabe.

DEARBORN
The DNA codes of the human body
have been broken. Soon, heart
ailments, cancer and so much more,
will be a thing of the past. Very
simply, your anguish… your
discontent… even your death is
no longer necessary in a
traditional sense. Whatever
malady that hides behind that
mask… is temporary.
She looks directly at David, and it stirs him. McCabe
studies her, and the operation. He thirsts for clues.
David flips through the folder – toward the back, a panel
of photos of storage tanks. Lavishly and warmly
photographed, just like next year’s cars in a magazine.

DEARBORN
Within an hour of your passing,
L.E. will transfer your body to a
vessel where you will be sealed
and frozen at 196 degrees below
zero. Power outages, earthquakes,
nothing will effect your
suspension-hibernation.

MCCABE
Did you sign this contract, David?
David looks down at pamphlet, looks up.

DEARBORN
Good choice. The Lucid Dream is
Life Extension’s newest option.
For a little extra, we offer the
cryonic union of science and
entertainment.

DEARBORN
(continuing)
-but this is a serious business.
The Lucid Dream is worth the risk.
And what is any life, if not the
pursuit of a dream? The dream of
peace. The dream of achievement.
The dream of hearing someone
saying these words, when they
truly mean them.
David is deeply moved as he listens. Somewhere, music
begins to play. It is The Beach Boys’ “Good Vibrations.”

A capture from the script of the meta-moment in Cameron Crowe’s 2001 Vanilla sky (remake of Alejandro Amenábar’s Abre los ojos 1997) when the main character David is beginning to realize that his entire life, as he knows it, Is a dream. A virtual world only for him, where he is the only conscious life form. He later learns that the “lucid Dream” option offered by “life Extension” is something he choose himself, that he is indeed living in this very moment as he is listening to “Dearborn” explain the procedures and advantages of being mentally removed from your body and placed in a perfect world where everything is exactly the way you want them to be. Where your death is erased from your memory and the joys of life are as plentiful as in a happy dream. The problem is that David’s Lucid Dream has turned into a nightmare. He later learns that he has been frozen for 150 years and now have the choice to wake up, or to reboot his dream and start over. His choice is predictable, he jumps of the top of a virtual skyscraper in order to wake from his nightmare and instead to face the world in the year 2151.

When I first saw this film I was struck by its genius and originality. It hit me on many levels as the most brilliant meta-film I had ever seen. When I was I child I suffered from Solipsism which is the philosophical syndrome that only one’s own mind is certain to exist. It is an epistemological or ontological  position that knowledge of anything outside one’s own specific mind is unjustified. The external world and other minds cannot be known and might not exist. I’m not sure where I got it from but I struggled with this, among children fairly common psychological idea and only revisited it after having seen Vanilla Sky.

As a child I used to wonder why, if I’m the only one who is really here, then this must be my world, then why is it not exactly like I want it to be? Or is this the way I want it to be? In Vanilla Sky, David’s dream is explained by the creator of the technology as;

VENTURA
I know.
(continuing)
We erased what really happened
from your memory.

VENTURA
And you sculpted your Lucid Dream
out of the iconography of your
youth.

So David’s dream was his own. Exactly the way he wanted it to be. Which as it turned out was simply a slightly different version from the life he was already living. A life where he gets the girl, gets the friends and gets the jobs. But everything else is exactly like it was before his dream began. New York City, with all its short comings and all its greatness, and none of it “real”. All of it associated to his earlier life.

Solipsism is first recorded with the Greek presocratic sophist, Gorgias (c. 483–375 BC) who is quoted by the Roman skeptic Sextus Empiricus as having stated: (1)

Much of the point of the Sophists was to show that “objective” knowledge was a literal impossibility.

The term for the specific kind of solipsism that David in Vanilla Sky suffered from, or rather was exposed to has yet not a name. The solipsism of my childhood would be categorized under “metaphysical solipsism”  by a psychologist. (my own armature judgment of the syndrome). It is the “strongest” variety of solipsism. Based on a philosophy of subjective idealism, metaphysical solipsists maintain that the self is the only existing reality and that all other reality, including the external world and other persons, are representations of that self, and have no independent existence. David’s world or “dream is then a virtually constructed Metaphysical Solipsism. Since the world outside of his Lucid dream is “real”. Let’s call it Meta-Virtual Solipsism!

Vanilla Sky is not the first, nor the last Meta-Virtual Solipsistic movie. It has in the last decades become a popular topic in both cinema and literature. I recently revisited the 1990 film by Paul Verhoeven, Total Recall in which the main character played by Arnold Schwarzenegger is over and over subjected to threats that his world is in fact a dream. Also here the audience and Arnold’s character Douglas Quaid (or Hauser) is told that there is in fact a real world that he can either choose to enter, or neglect. He then has to trust his intuition (which in the case of action movies from the 90’s is painfully obvious for the audience.) The nature of Meta-Virtual Solipsistic narratives in popular cinema and literature is becoming more and more complex. Vanilla Sky, Inception, The Matrix to name a few examples.

For me, let’s say recent phenomena of meta based entertainment is a kind of arming of the mind for an ever increasing virtual life. MMORPG’s (massively multiplayer online role-playing games) may be an even more obvious example in which the virtual world consumes in some cases over 50% of a person’s life. These virtual world have millions of occupants and we can now begin to talk about an immigration, from the “real” to the virtual. We have yet to witness the first complete immigration. Like the ones seen in cinema but it will come and I believe this is what we are preparing in play, with narratives in virtual worlds, cinema and literature. And just like David’s world most of these worlds are instantly recognisable. In Second Life most avatars looks like Pamela Anderson and Brad Pitt, gestures are standardised, most of the buildings are ordinary suburban houses and the whole space is a mimetic doll’s house. However everything in Second Life plays a role. How would you communicate with a crystal? No one know, therefore most games and movies avoid abstraction. We are entering a world of pure semiotics, where there is only language. And which language will we speak? One that we know of course!

“Physical forms possess a character only because we ourselves possess a body” (2)  According to the Swiss art critic Heinrich Wölfflin (21 June 1864 – 19 July 1945) this is true for everything that we can possibly experience as human beings. – the only possible way for us to relate to and understand our environment is by unconsciously describing it in relation to the way our body works and functions within the world our bodies inhabit. Things like Organs, limbs, horizontal and vertical directions, size etc, are all properties and understandings that we our self carry in our minds, this would be true of everything from art, sculpture, buildings, literature, music and machines.

In the virtual realm or in movies, the existence of a “building” or a “person” is purely symbolic. It is a reference to a real world structure, created in a space where none of the utilitarian functions – protection from the elements, air condition, seating, etc. – have any relevance. It’s symbolic functions bring legibility to what could otherwise be an incomprehensible abstract space. Much like the architectural logic of movie sets. Functions follows form: the function of a place is unclear unless the building tells you what it is. A door on stage is not so much a functional connection between two spaces but a narrative device.

What does convince people engaging in online worlds to replicate and follow these conventions in an environment where supposedly everything is possible? This effect is an interesting feature of literal virtual worlds like Second Life and would not be possible in a purely abstract virtual environment. One hardly would know by intuition what behaviour is appropriate in a purely abstract virtual world. Like how to talk to crystals.

Wölfflin probably did not have virtual worlds in mind when he wrote his prolegomena yet it is still relevant. And we might see our virtual life become more and more abstract. Give Wölfflin an ipad with a futuristic tower defence game and he would probably faint of mental overload.

Today, on the edge of 30 I can no longer recreate my childhoods metaphysical solipsism. If I try really hard I can imagine it but I am now somehow rooted in this body and cannot float with the same ease. Which I am quite pleased with as the syndrome cased me a great deal of paranoia and it took a lot from a 6 year old to fight it out of my mind. I am instead now massively looking forward to my first truly meta-virtual solipsistic experience! be it a nightmare or not.

2:  WÖLFFLIN, HEINRICH, Prolegomena to a psychology of architecture‟, in Mallgrave, Harry Francis ,ed., Empathy, form and space: problems in German aesthetics 1873-1893, Getty Center for the History of Art and the Humanities, (1994),