Léopold Lambert – Paris on March 29, 2017
If you enjoy articles of the blog, have a look at The Funambulist Magazine!

Photograph above by Christel Bonard of Gwendolyne, holding the Guianan flag (thanks Lya Selma Zébus-Loubidika)

On March 28, 2017, a general strike was declared in Guiana (at the time of printing this issue, (April 27) the barricades have been lifted but the social movement is still unfolding). Guiana is a French colony in South America and home to 250,000 people, including 9,000 members of the Indigenous Nations of Kalina, Arawak, Emerillon, Galibi, Palikur, Wayampi and Wayana, whose ancestors were slaughtered while trying to prevent the colonization of their land in the 18th century. Thousands of enslaved African bodies were later forcefully brought to Guiana by the French. Some became Maroons and formed free communities in the rain forest. As in other French colonies, following the 1848 abolition of slavery the territory saw a state-engineered migration of exploited laborers from China and India. To most French “metropolitans” now, it is known only for serving as a launch site for the European Space Agency.

Since 1946, Guiana has been an “overseas department” of France, along with the islands of Martinique, Guadeloupe, and La Réunion — the island of Mayotte became a department in 2001. The départementalisation of these four colonies was proposed at the end of WWII in a measure drafted by the parliamentary representatives Léopold Bissol (Martinique and Guadeloupe), Raymond Vergès (La Réunion), and Gaston Monnerville (Guiana), and eventually carried out by none other than Aimé Césaire (who was then Mayor of Fort-de-France and a representative for Martinique). This law granted full French citizenship to all colonized subjects in these four territories, and it does not require much speculation — Césaire was, after all, very vocal about it — to recognize that these representatives were in no way aiming to perpetuate the colonial conditions (still in effect to this day) when drafting this law. In fact, the five current overseas departments are subject to an ambiguous, contradictory designation that makes their inhabitants fully French when it is to the advantage of the French State, while deeply neglecting the existence of racialized populations and undermining their legitimate claim to full French citizenship (cf. articles by Françoise Vergès and Hamid Mokaddem, respectively, about Mayotte and New Caledonia-Kanaky in the 9th issue of The Funambulist). 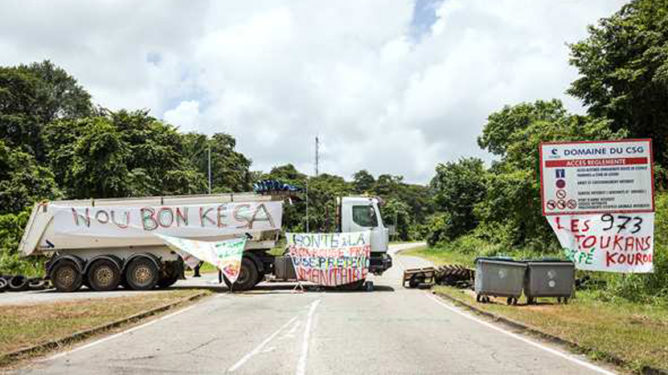 In March and April of 2017, Guiana, just like Martinique and Guadeloupe in 2009, undertook a general strike to protest the extreme precariousness in which non-public workers have to live and the deep disparity between the quality of life in “metropolitan” France and in the colonies. Using the Creole phrase “Nou Bon Kesa” (“We Won’t Take It Anymore”) as their rallying cry, tens of thousands of strikers and demonstrators — who even succeeded in stopping the launch of a rocket last week — are creating what the Western media seems to have unanimously agreed on calling a “paralysis” of Guiana, in a biased, capitalist (and implicitly ableist) reading of the situation. The understanding of society as strictly a form of flows, and the perception of the protestors’ interruption (the “paralysis”) as a form of violence corresponds, indeed, to the capitalist vision transformed into reality.

The “500 Brothers,” a group of masked Black men mobilized against criminality, form one of the core organizations in this strike. They in particular have caught the French press’s gaze, revealing the apparently terrifying-yet-fascinating vision that unidentifiable, resolute Black male bodies constitute for white viewers — we can see in this terrified fascination a perfect and rare correspondence of what they actually see and what they imagine seeing. As usual, this paranoid fetishization of what is perceived as violence — made into official state policy by the 2010 islamophobic law forbidding anyone from wearing “an outfit dissimulating the face” in public space — to which the gun and sword logo on the backs of the “500 Brothers” (either clumsily or very skillfully) contributes, takes the focus away from the formidable crowds demonstrating these last few days. 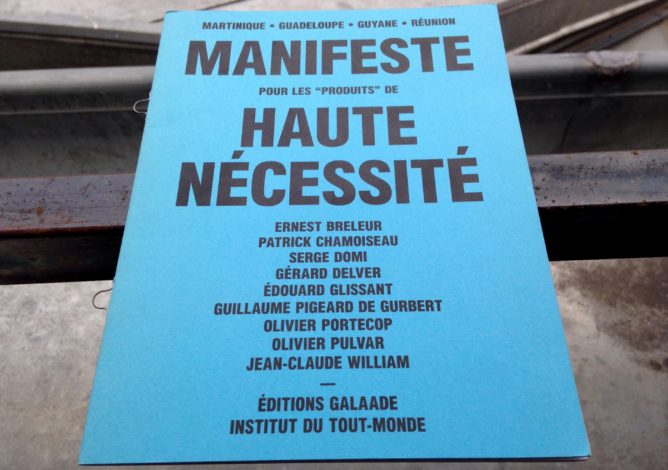 During the general strikes in Guadeloupe and Martinique in 2009, Édouard Glissant, Patrick Chamoiseau, and seven other Caribbean authors (all male, regrettably) published with Galaade Editions a short Manifesto for High-Necessity Products, which envisioned a post-capitalist society that the strike seemed to foreshadow, where high-necessity products of course consisted of things like food, but also “dignity, honor, music, songs, sports, dances, readings, philosophy, spirituality, love, free-time dedicated to the accomplishment of great intimate desires (in short, poetics).” They borrowed Jean-Claude Michéa’s concept of “ethic cleansing” (“épuration éthique”) as a creation of capitalism that “presides within all imaginaries” (“préside dans tous les imaginaires”). Although in the past I have followed some thinkers in arguing that Gilles Deleuze had a rather “continental” reading of islands and their colonial conditions, it is also tempting to use the quote about Third-World Cinema in The Time-Image (1985) that these Caribbean authors chose to open their manifesto:

The moment the master, or the colonizer, proclaims “There have never been people here,” the missing people are a becoming, they invent themselves, in shanty town and camps, or in ghettos, in new conditions of struggle to which a necessarily political art must contribute.

We can re-read the 2009 manifesto today, keeping in mind that, contrary to the imaginary created by the mainstream press and politicians — that envisions overseas territories as being far behind “metropolitan” France’s modernity — their struggles constitute the vanguard vision of the decolonial processes, which are bound to happen in the old metropole just as the last lines of the manifesto suggest:

So here is our vision: Small countries, suddenly at the new core of the world, suddenly immense to be the first examples of post-capitalist societies, able to undertake a human fulfillment as a part of the living’s horizontal plenitude.