Dear readers of The Funambulist,

I am very happy to wish you a joyful new year and to announce a double-launch today: like every two months, a new issue of the magazine is ready to be released and, exceptionally, it is accompanied by the launch of a brand new website that brings together the magazine, the blog, and the podcast, facilitate the open-access navigation and purchases, as well as allows subscribers to gain full access to the magazine’s archived articles. We hope that you will enjoy your navigation on this new platform, as well as the contents of this new issue, and I would like to thank Francis Redman and Marlow Perceval for respectively designing and coding this new platform.

The ninth issue of The Funambulist engages a shift in the geographical focus of the magazine. Periodicals regularly produce issues on islands but may tend to focus on their geological formation, or the ways in which supposedly “desert islands” have been rendered “inhabitable,” thus perpetuating the colonial narrative of Robinson Cruzoe. This particular issue attempt to amplify the voices of indigenous narratives, as well as on non-colonial protocols of passage on these islands, like in the cases of displaced persons in the Mediterranean Sea or the Indian Ocean. Whether they are the settings of decolonizing and demilitarizing struggles (Mayotte, Kanaky – New Caledonia, Hawai’i, Diego Garcia, Puerto Rico, Okinawa), or of the economization and incarceration of displaced lives (Lesvos, Nauru, Christmas Island), or places that even face the threat of absolute disappearance, as a consequence of the “big countries’” mode of existence (Tuvalu, Kiribati), the narratives voiced in this issue are simultaneously asymmetric regarding the forces against which they are mobilized, and united in a continuously reaffirmed urgency that always sooner or later topples these forces. 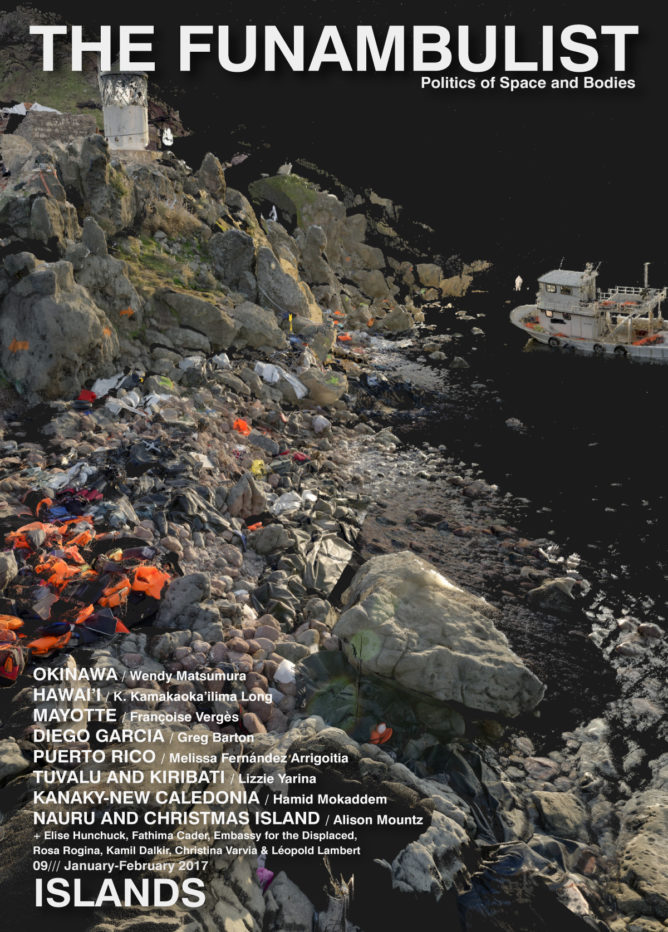