Léopold Lambert – Paris on September 9, 2016
If you enjoy articles of the blog, have a look at The Funambulist Magazine!

Since April 1, 2016, the Standing Rock Sioux Tribe, later followed by over 200 other Native nations, has been occupying the sacred site of Standing Rock in order to protect it against the construction of the Dakota Access pipeline (named after the two American States, not the Native nation of course), which would carry Bakken crude from North Dakota to Illinois. On September 8, North Dakota Governor Jack Dalrymple called for the U.S. National Guard to intervene at Standing Rock, a few hours before the ruling of a lawsuit that the Standing Rock Sioux Tribe had brought against the U.S. government. A few days earlier, some Native organizers had been attacked by dogs ordered by a private security force, and bulldozers had demolished a sacred burial ground (see the Democracy Now report here).

In looking at the right part of the photograph above illustrating this deliberate profanation, you will recognize the well-known yellow worn by all non-customized Caterpillar construction (or rather, destruction) equipment on what appears to be D8 bulldozers. Condemning Caterpillar for actions committed in the context of a State’s infrastructural construction can appear far-fetched at first glance — we will see in the last paragraph that it is actually not — but this 90-year old American company is also renowned for its numerous contracts with the U.S. Army, and has no problem with displaying its support for it on its website through the photo of a militarized bulldozer associated with the caption “Caterpillar Supporting Our Armed Forces.”

The part of the Caterpillar website dedicated to “Defense” is particularly interesting in this regard and relatively generous in the information it provides. One can get an overview of the “Defense Product Line” offered by Caterpillar to the U.S. Army and U.S. Federal civilian agencies, including bulldozers such as the D6K or the D7R. The company however does not stop at providing military equipment to an army knowingly deployed in various parts of the world; it also offers training to military operators and provide a schedule of courses throughout the year. The website also features a list of federal agencies and branches of the U.S. Army that it supplies with equipment. Under the title “Foreign Military Sales Programs,” the company lists the states of Iraq and Afghanistan as clients of its so-called “Supplemental Acquisition Program.” There is however no mention of another indirectly important foreign military client: the Israeli Army.

The Israeli army indeed regularly purchases Caterpillar bulldozers through the “US Foreign Military Sales Progam,” which are later customized by the defense contractor Israel Military Industries to become an autonomous war-machine able to operate in Palestinian cities without any supporting squad. The D9 model of the Caterpillar bulldozers has been a particularly recurrent acquisition by the Israeli Army for decades now. Created in 1954, it has been used in every war lead by the Israeli government since the first Sinai invasion in 1956. This ‘steel monster’ is 8-meters long, 4.6-meters wide, 4-meters high, weights 60 tons, and is usually equipped with a 1.8-meter-high blade in its front and a long plowshare in the back, which can dig a 1.7-meter-deep furrow. The latter was particularly used during the Second Intifada in order to sever the Palestinian infrastructure (road, water, sewage, electricity) under the pretext of demining — an easily deniable pretext since the plowshare is situated in the back of the bulldozer. The D9 has many variations: the D9T does not need an operator to be present within the vehicle, the “Lioness” version is higher than wide and can thus penetrate narrower streets — although demolishing houses to let bulldozers move forward in Palestinian refugee camps has never been a problem for the Israeli Army in history… (for more on the question, you may refer to my short book The Politics of the Bulldozer, B2 Editions, 2016) 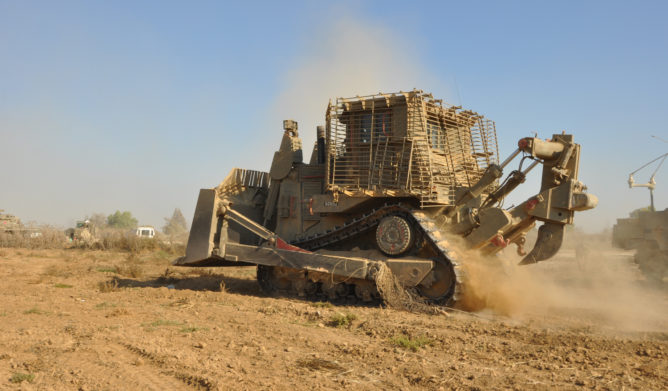 In March 2003, an American activist named Rachel Corrie was killed by such a bulldozer in Rafah when she interposed herself (see past article) between the military vehicle and the house that its operator intended to destroy — about 2,500 Palestinian houses were demolished by bulldozers during the Second Intifada. Although this dreadful event was legitimately relayed by Western media, we can however regret that such coverage does not extend to the many Palestinians who also died in the demolition of their houses by these bulldozers. In November 2004, Human Rights Watch issued a call entitled “Israel: Caterpillar Should Suspend Bulldozer Sales – Weaponized Bulldozers Used to Destroy Civilian Property and Infrastructure,” which remained unanswered positively, Caterpillar’s CEO James Owens saying that the company did “not have the practical ability or legal right to determine how our products are used after they are sold.”

Whether used in the desecration of Native land, in the post-invasion infrastructure of Iraq or Afghanistan, or in the demolition of thousands of Palestinian homes, for the moment, this article has only evoked what we can call the weaponizable function of the bulldozer. However, we ought to look at what a bulldozer is in its essence: it is fundamentally an instrument of absolute geoengineering control over a territory and is, as such, a weapon, rather than a weaponizable tool. As argued at length on The Funambulist blog and elsewhere, qualifying something as a weapon (like, say, architecture) does not necessarily mean that its use should be forever proscribed. What it means is that its use is inseparable from violence itself and that, as such, it necessarily crystalizes, enables, and enforces a political program.If we go back to North Dakota and, more broadly, to the ways the United States has systematically asserted its genocidal claim on the land, we can see how an instrument like the bulldozer (and like barbed wire, as Olivier Razac would argue) was invented through such a logic of territorial domination — the displacement of Bakken shale (a mineral formation only found in Montana, North Dakota, Saskatchewan and Manitoba) that the Dakota Access pipeline would enable over thousands of kilometers is also inscribed in this geoengineering dominating logic. Just as the bulldozer is a weapon, not a weaponizable tool, we should interpret what is at stake in Standing Rock and in Palestine not through a negotiation of the ways in which the politics involved could become acceptable, but rather through the prism of the entirety of the political ideologies at work: in both cases here, variations of the same colonial project.