Léopold Lambert – Paris on November 9, 2018
If you enjoy articles of the blog, have a look at The Funambulist Magazine!

I just came back from a trip to Kanaky-New-Caledonia where the first of three referendums to decolonize the archipelago was won by the “No” by a much shorter margin (56% vs 44%) than anticipated. There is would be so much to write about, but I am deliberately keeping what I feel legitimate to write about for my next book about the colonial history of the French state of emergency in Algeria, Kanaky, and the French banlieues as to give the proper context to the Indigenous Kanak (and their Caledonian supports) anti-colonial struggle. I however wanted to write a short article specifically dedicated to the French military police stations (gendarmeries) in Kanaky-New-Caledonia in order to draw parallels with an architectural inventory of police stations in the Paris banlieues published in 2016.

In the North Province of the Grande Terre (the main island of the archipelago), the only buildings that only fly the French flag — other public institutions such as town halls and fire fighter stations) fly both the French and the Kanaky flags — are the gendarmeries (military police stations). As such, they constitute clear reminders of the colonial dimension in which the country remains, despite the relative improvements that followed the Matignon Accords (1988) and the Nouméa Accords (1998). These accords, however debatable, are the direct results of the Kanak struggle towards the independence initiated in 1975, which intensified with the 1984-1988 insurrection. During these years, the occupation of gendarmeries was one of the prominent actions the Kanak and Socialist National Liberation Front (FLNKS) organized to put pressure on the French colonial authorities. This was particularly the case during the active boycott of the November 18, 1984 territorial elections that marked the beginning of the insurrection, and it was again such an action that led to the 1988 hostage situation in Ouvéa island — when a military police officer opened fire on the occupiers, the situation escalated and led to the killing of four military police officers, the hostage take of every others for two weeks and the execution of 19 of the Kanak militants by the army. One of the main differences between the 1984-1985 occupations that never led to the death of military police officers nor independentist militant and what remains the biggest trauma of recent history for the Kanak people is that during the years of what is often euphemistically called “the events,” thousands of military personnel have been deployed in the archipelago by the colonial authorities, thus increasing significantly the amount of military police officers who were completely foreign to the reality of the country. What the materialization of the gendarmeries in the archipelago today reveals is that the lesson has not been learned as barbed wire fences have been erected around all of them, thus severing them even more from the villages and tribes that surround them. Although it would be naive to expect otherwise, the explicit militarization of the few institutions that remain under the scope of the French state (army, police, justice, money, and foreign affairs) is a visible reminder of the fact that “people are not born equal when facing the police batons” (quote from a French journalist describing the attack of the Kanak tribe of Saint-Philippo by the military police during the state of emergency on February 18, 1985). 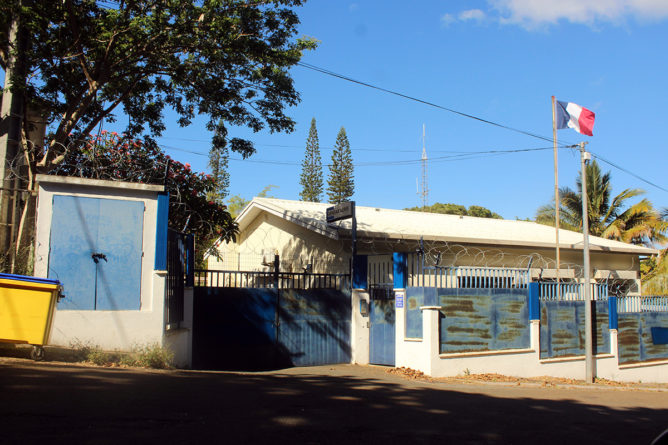 Gendarmerie of Thio, perhaps one of the most famous in Kanaky-New-Caledonia as it was occupied (along with the rest of the village whose mayor used to belong to the Front National) by Kanaky Provisional Government’s Minister of Defense, Eloi Machoro (who was assassinated by the military police special forces a few weeks later on January 11, 1985) and his squad of militants for over three weeks. 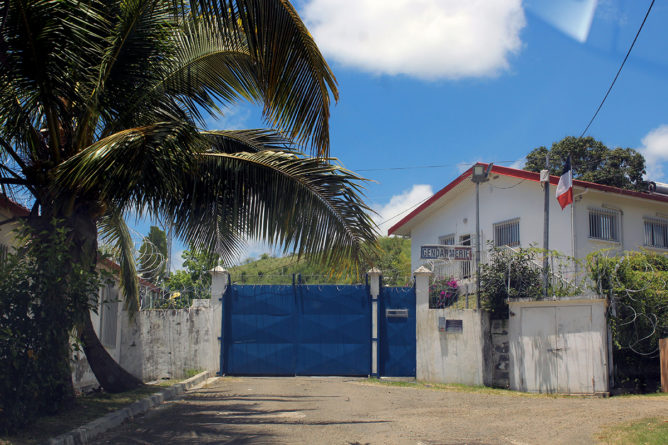 Gendarmerie of Canala, the village where the active boycott of the November 18, 1984 elections was one of the most intense (Eloi Machoro spectacularly broke a ballot box with an axe, with the complicity of the Kanak mayor, Maxime Karembeu). In addition of being fortified, the gendarmerie is situated, alone, on the top of a little hill that dominates the village. A municipal representative told me that there has been continuous demand that the military police “comes down” in a new building. 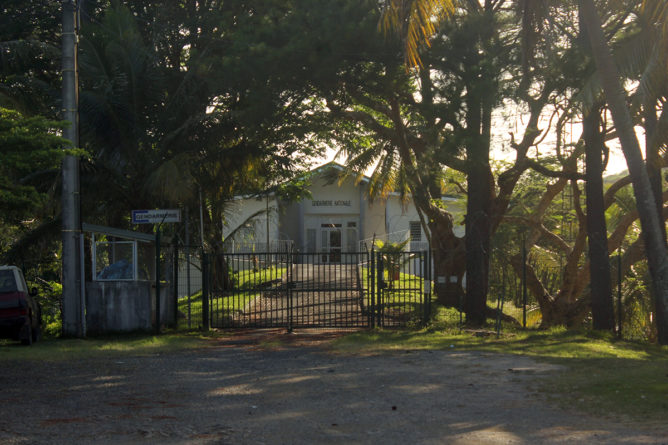 Gendarmerie of Hienghène, in front of the town hall, where Kanaky Provisional Government’s President, Jean-Marie Tjibaou, has been mayor for twelve years. 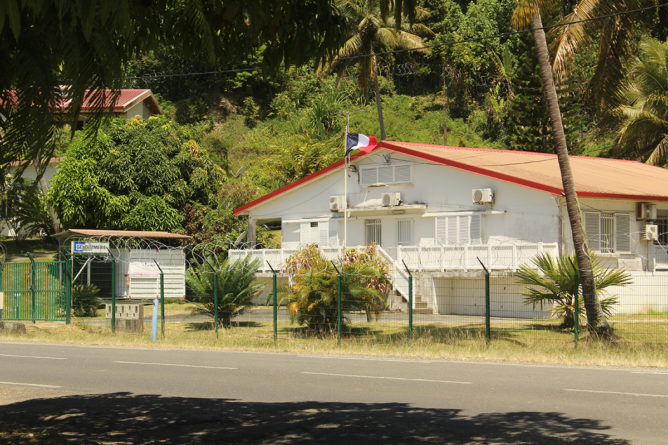 Gendarmerie of Touho, another predominantly Kanak village on the East coast of the Grande Terre. One of the most militarized I have seen. 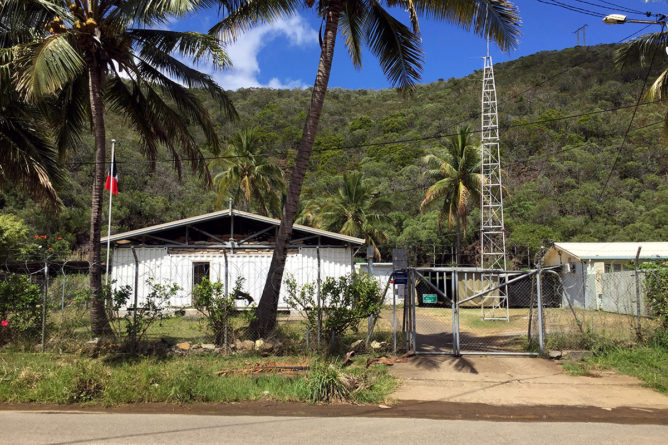 Gendarmerie of Kouaoua, a strategic village of the East Coast because of its proximity of the biggest nickel mines of the country (Kanaky-New-Caledonia’s soil is the second largest resource of nickel in the world). 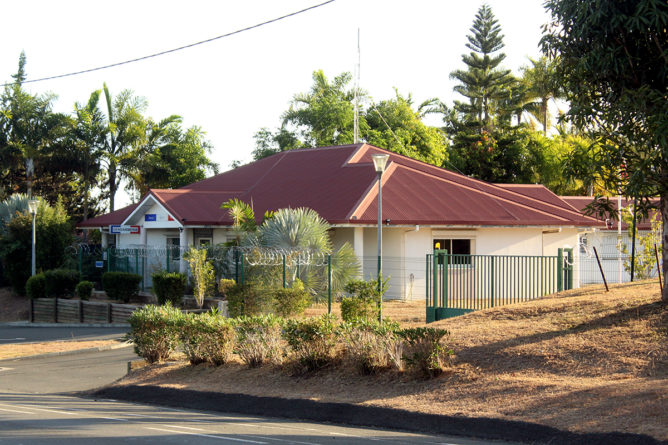 Gendarmerie of Boulouparis. The more “proper” architecture reveals the difference between the South province where towns are predominantly inhabited by white Caledonians and the North where the population is predominantly Kanak. 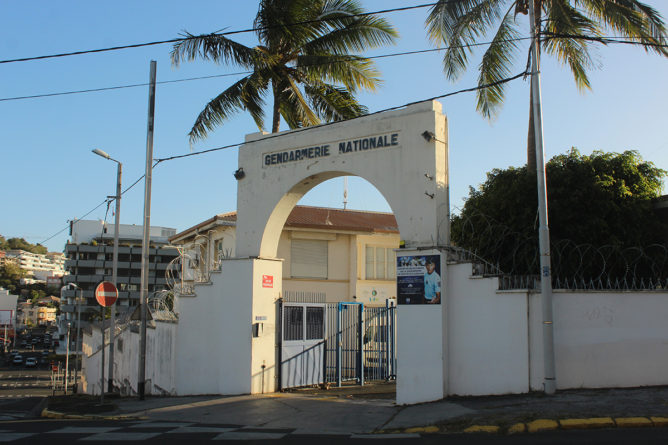 Gendarmerie of Nouméa, the main city of Kanaky-New-Caledonia. 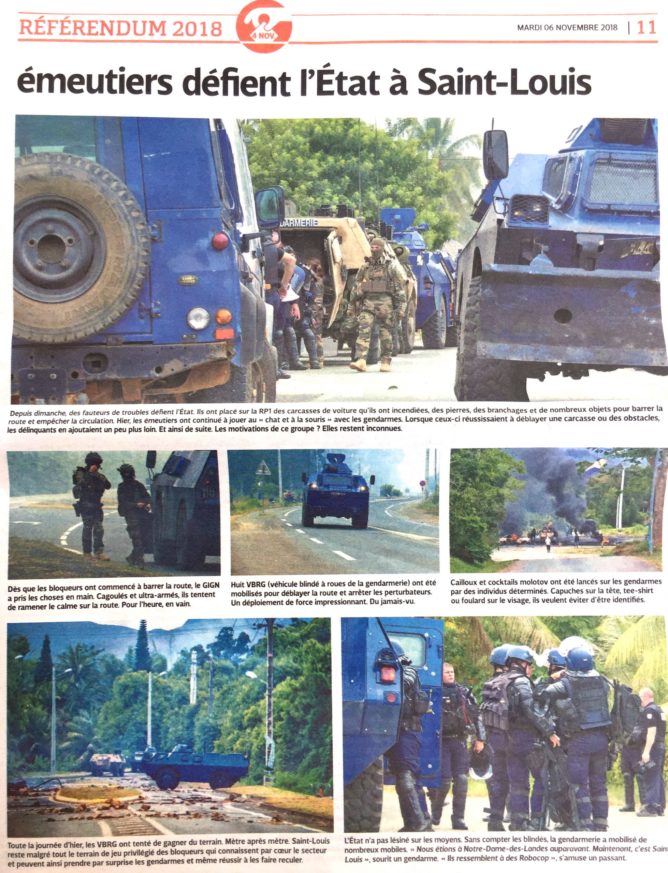 I’m adding this photo from the local (loyalist) newspaper “Les Nouvelles Calédoniennes” from last Tuesday (Nov. 6, 2018) to show what kind of military equipment is deployed in case of confrontation between anti-colonial militants (systematically designed as rioters or delinquents by the French media and authorities in the case of the Saint-Louis Kanak tribe) and the military police. Although most people in the country insist on the difference of political conditions between the 1980s and now and that is important to note that these clashes were the only ones that occurred after the results of the referendum, this type of policing equipment — whose differentiation with the means used in France is blatant — has remained the same.