Léopold Lambert – Paris on February 26, 2016
If you enjoy articles of the blog, have a look at The Funambulist Magazine!

Fence recently set up and awaiting barbed wire on its top to materialize the border between Slovenia (i.e. Schengen space) and Croatia / Photo by Léopold Lambert (February 2016)

After documenting the particular Eastern gateway between “Fortress Schengen” and “Fortress U.K.” that Calais embodies, a few weeks ago (see past article), I undertook to document a part of another border of the Schengen space, which was recently materialized through barbed wire and fences: the border between Slovenia and Croatia (member of the European Union, but not of the Schengen space). The photographs associated to this article attempts to give a sense of these apparatuses of control deployed against migrant bodies, but it seemed important to associate this text to them in order to account of a small discrepancy between what I thought I would see, and what I actually saw. Part of the barbed wire ‘rolls’ set up on Slovenian land by the Miro Cerar administration at the end of 2015 had to be recently withdrawn because of them being flood by the river Kupa that separates the two countries close from the town of Metlika. Barbed wires are therefore currently replaced by fences whose Y-shaped posts await to be complemented by additional barbed wires (see photos above and below).This transitional aspect of things has therefore to be kept in mind when reading the following paragraphs. Similarly, it should be kept in mind that my research documents only 80 of the 670 kilometers of the border, including the main access between the two capital cities, Ljubljana and Zagreb.

These two provisions being stated, what surprised me during this research was the discontinuity of the militarized border. At some points, the fence creates an entrance to give access to the river (in such optical manner that it is hidden from the other side), on another, the barbed wire rolls stop in the middle of a forest, a few hundreds meters away from a custom station, some other times, the river remains the blurry and inconsequential boundary between two countries that celebrate their 25th independence anniversary this year. The militarized aspect of the border would thus ‘only’ be a spectacle, allowed by the vocabulary of continuity that the standardized components of the fence and the thread of the barbed wire constitute? This is an aspect of walls that I usually do not really address, favoring the effective immediate violence on bodies that they constitute. Yet, in this case, the spectacle of the walls, its rumor, organizes bodies in the territorial space and therefore finds a place in the editorial approach of this broader research.

The rumor of the wall strategically serves a political agenda addressed to three population through several means of communication — we should hold the press accountable to be a particularly significant one:
– the population of displaced and migrant bodies who developed means of sharing information, crucial to the evolution of their precarious trip, yet permeable to the ambiguity of the rumor. In the case of the Slovenian-Schengen border, just like in the case of the Hungarian-Schengen border (see past article), the rumor of the wall intends to discourage this population to approach it and, thus, to reorient its direction.
– the citizens of Slovenia, and by extension the Schengen and U.K. citizens, comfortably numb in a racist fear of otherness constructed through televised demagogic imaginary. Hearing the rumor of the wall that asserts that their government(s) is acting on containing what is perceived as a “foreign invasion” comforts their certitudes in a self-feeding ideological loop, which is difficult to exit.
– the other governments of Schengen countries, which have pressured the Cerar administration to set up the militarized border in order to contravene to their potentially effortless accommodation and integration of the refugee and migrant population — much more effortless than the formidable means engaged to control and suppress this population. 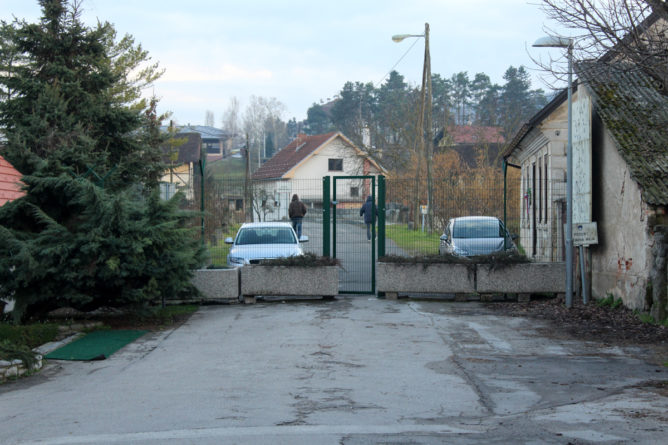 One place that I encountered in my research is particularly eloquent of the drastic consequences that constitute the elaboration of this rumor, and its means of materialization. The small Croatian town of Bregana, in the direct vicinity of the highway custom station between Ljubljana and Zagreb, extends a small part of its urbanity in Slovenia, on the other side of the thin river sharing the same name. The small street depicted above looks like many European residential streets but while the houses in the background are in Croatia, the ones in the foreground are in Slovenia. The border that used to be only materialized by the small Bregana river is now materialized by the fence awaiting its barbed wire. The reason for this is that this streets happens to be on the separation between Fortress Schengen (a 4 million square-kilometer area) and… the rest of the world. There is something seismic in the radicality of such a fault, where a single country used to stand (admittedly, Slovenia and Croatia were two distinct republics of Yugoslavia). The smallness of the door (Fortress Schengen’s back door) accommodated in the fence only attests of the past domesticity of this street but reinforced the absurdity of the wall’s spectacle.

If citizens of the European Union are serious about their political federation — a project that has still some (perhaps naive) echoes to me — and, if they refuse to transfer the violence of past borders into their new peripheries (exacerbated by racism), they need to interpret the Slovenian wall not as the crystallization of local politics but, instead, the continuity of common politics that deploy themselves in Slovenia, Hungary, Lampedusa, Mellila, Ceuta, Calais, as well as in the externalized (in Morocco, Bosnia, Serbia, etc.) and internalized detention centers that populate their land and thus form other walls of the fortress for which they are effectively responsible. 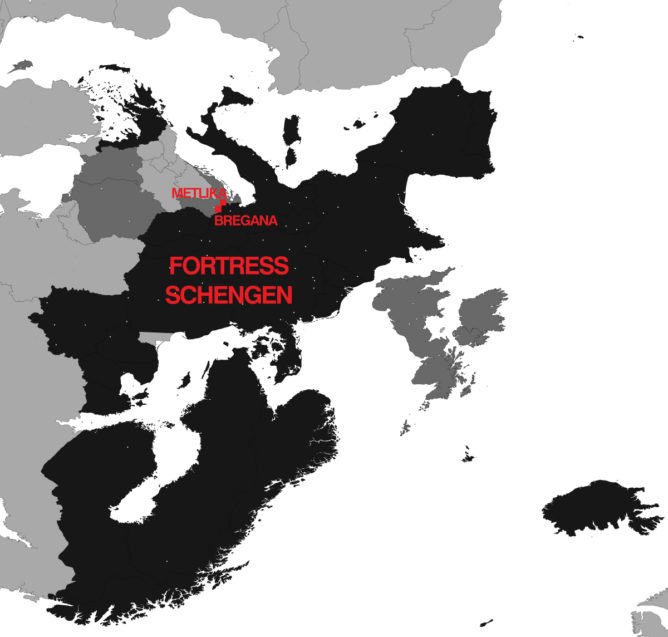 PHOTOGRAPHS OF THE SCHENGEN WALLS ///

All photographs by Léopold Lambert (February 2016): 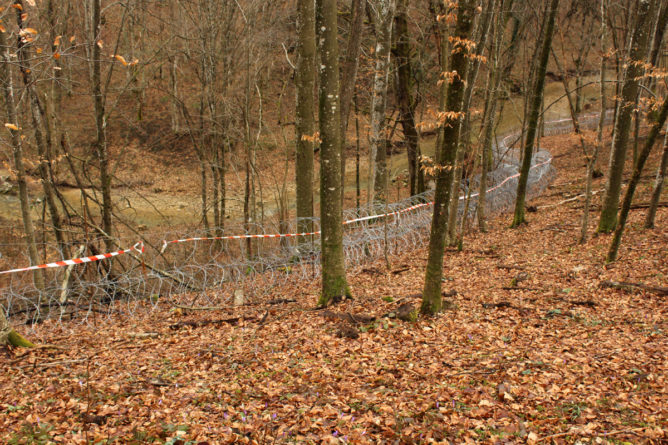 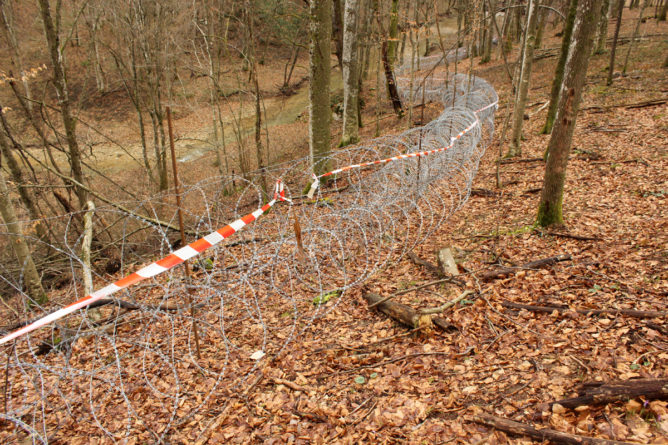 Border near the custom station of Krmačina. 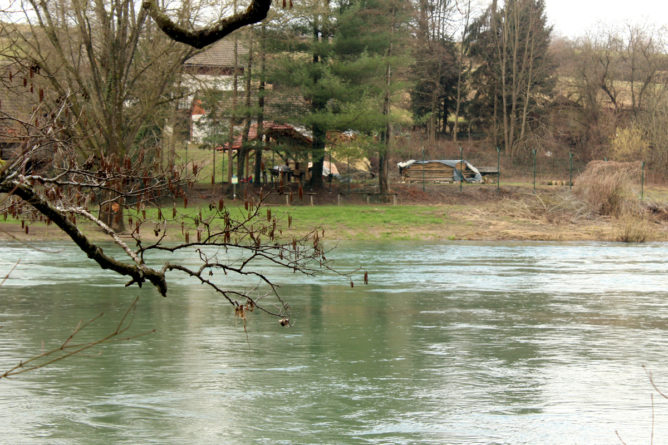 View of the newly set up fences from the Croatian side of the river near Dragoši. 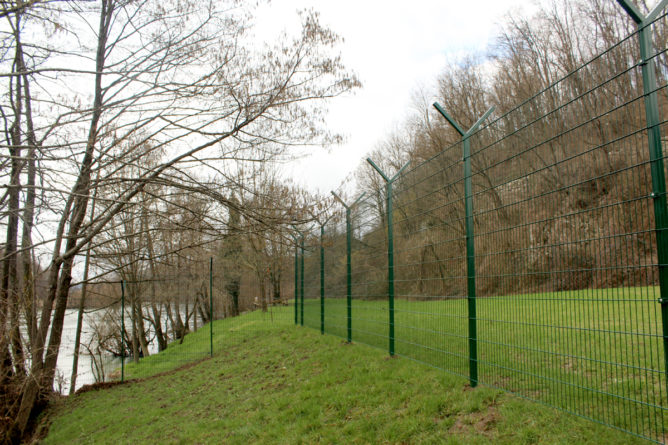 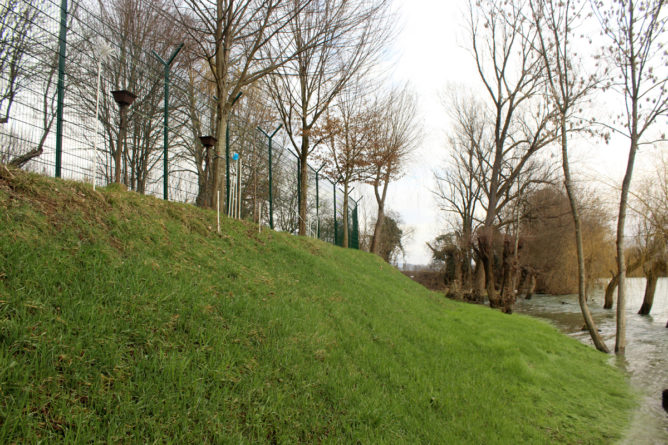 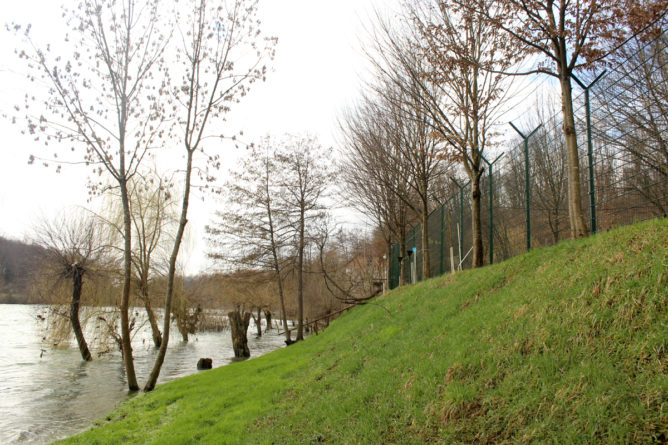 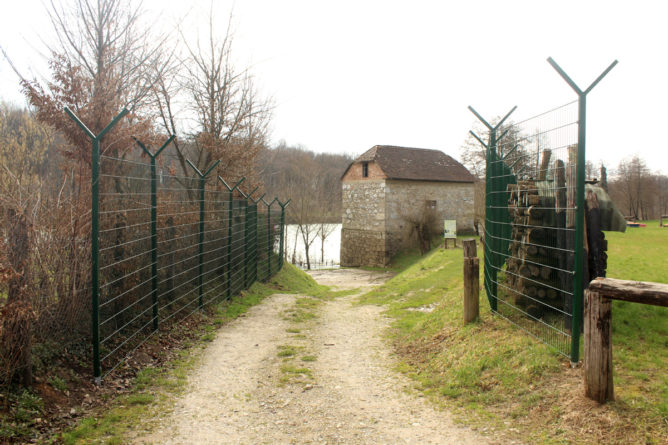 Newly set up fence in Križevska Vas. The last photo shows the discontinuity of this militarized border, yet set up in a way that such a discontinuity is invisible from the Croatian side of the river. 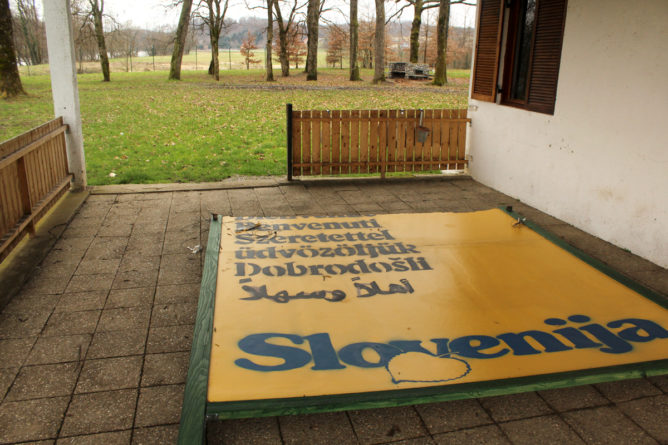 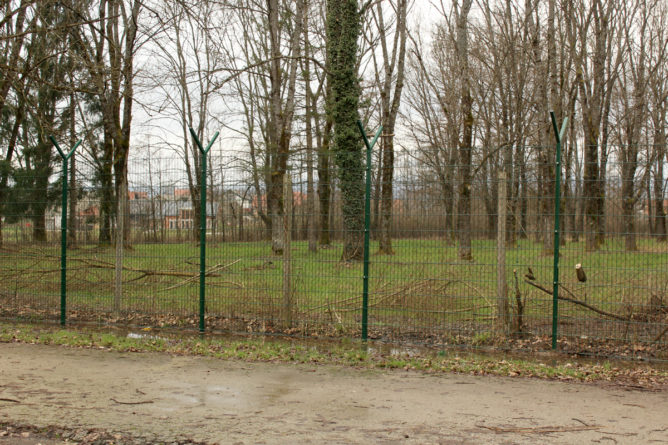 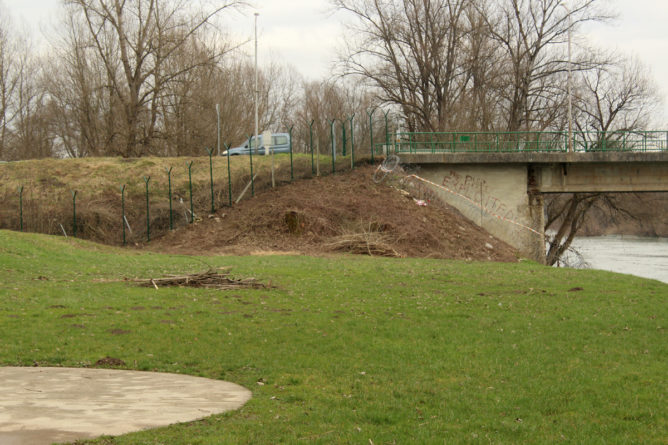 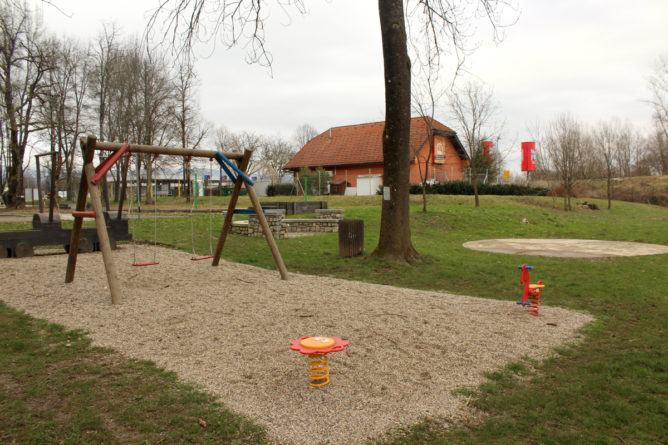 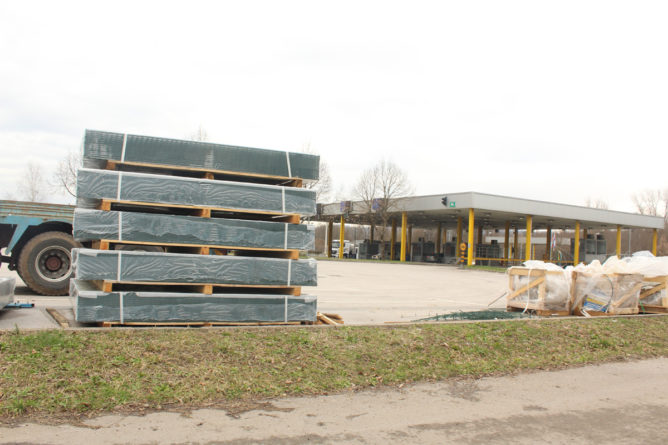 Former youth center of Metlika in the immediate vicinity of the custom station. I conducted an interview of local researcher/activist Marjetka Pezdirc for the podcast 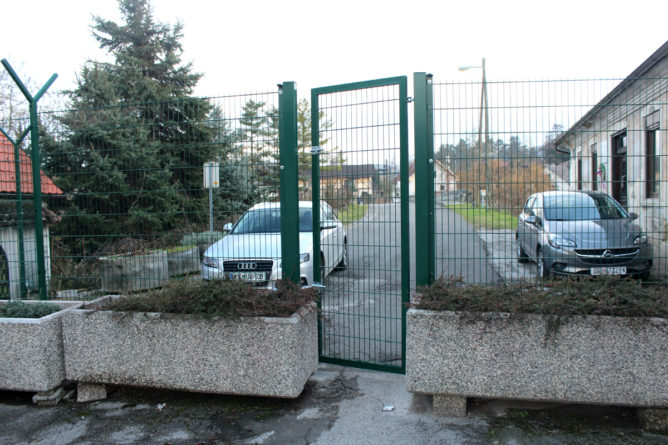 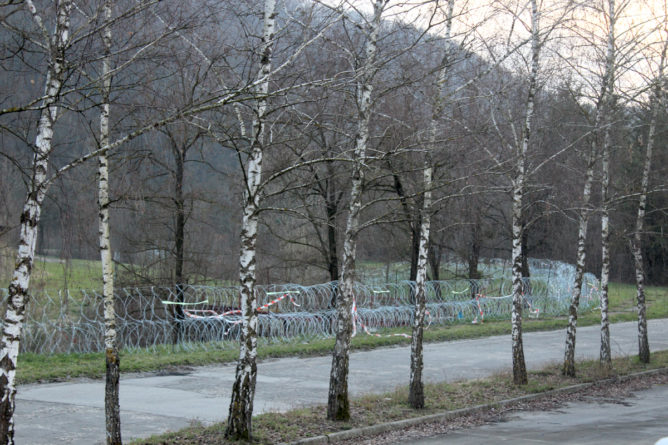 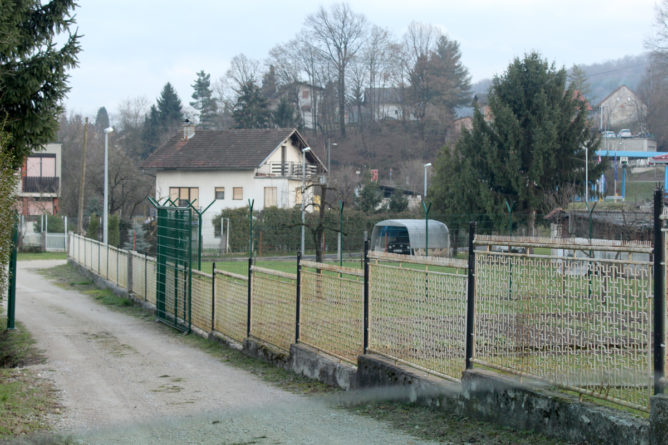 Slovenian part of Bregana. The fence runs sometimes in the very garden of local houses. The last picture is a close-up of the “Schengen back door” described in the text above. 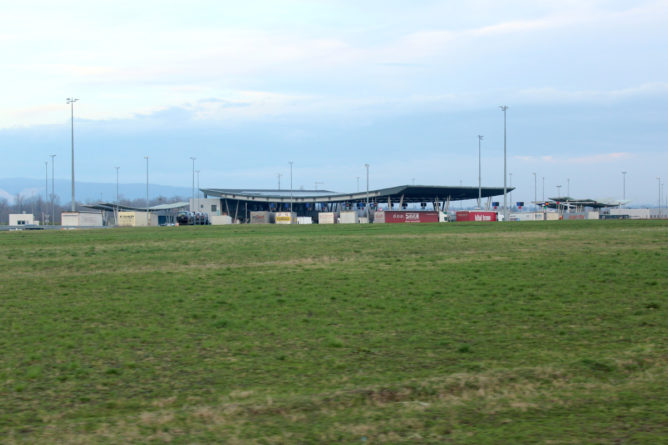 Custom station of Obrežje on the highway between Ljubljana and Zagreb.