Léopold Lambert – Paris on June 16, 2015
If you enjoy articles of the blog, have a look at The Funambulist Magazine!

Two recent events involving the policed/militarized evacuation of a swimming pool based on the ethnicity of the swimmers have recently came to light. 1. McKinney, U.S. /// On June 6, 2015, in McKinney, a suburban town of Texas, a group of African American children who were celebrating the end of the scholar year by organizing a pool party in the local swimming pool were evicted from it by the police. Some of them were arrested and insulted, and one Black teenager girl was violently assaulted by a White police officer before being crushed onto the ground by the same officer for long minutes. We can suspect that we would have never heard of this sickening event if it was not for a clear video showing the totality of the assault — in this regard, it is crucial to see that the cut images massively shown in the press reflects less the violence of the assault than do the long minutes of the video during which the young woman, sobbing, had her face in the ground, the police officer pressing his weight on her back. I am adding here a small map of what I believe is the spatial context in which this racist assault occurred (I found it through a few information found in articles, as well as from the visual indications of the video itself), since the aim of this article is to understand these two events through the spatial politics at work in both situations — a situation that I do not know specifically in the policed neighborhood of Craig Ranch in McKinney, Texas, but that evidently do not escape from the structural racism the characterize the relationships between the American forces of police and Black bodies.

2. Al-Karmil, Palestine /// The second event that share similarities with the first one despite the geographical distance and differences of which we should remain aware each time we establish parallels between the African American struggle and the Palestinian one, occurred in the West Bank village of Al-Karmil (see maps above) on April 7, 2015. As the Israeli organization B’Tselem recounts,

during Passover holidays, a group of hundreds of settlers accompanied by Israeli security forces came to Birkat al-Karmil – a natural pool close to the village of al-Karmil, which lies in the southern Hebron Hills within Area A. […] B’Tselem’s investigation found that at about 2:00 P.M., hundreds of settlers arrived at the pool accompanied by dozens of soldiers, Border Police, and representatives of the Civil Administration (CA). The security forces ordered the Palestinian bathers to leave the pool and remain on the edge of the park. They allowed the settlers, however, free and exclusive use of the rest of the park. At about 5:30 P.M., the settlers and the security forces left the area. According to media reports, reveal that the settlers came to the pool on the initiative of the Susiya Tour and Study Center. In its publications, the center described the pool as the historical site of the Biblical settlement of Carmel and emphasized that the visit was authorized and accompanied by the military. (source)

The spatial politics at work in the case of Al-Karmil are sensibly different from the ones in McKinney, because of the legal essentialization implemented between Palestinians and Israelis/tourists. The maps presented above and below thus intend to illustrate how this essentialization is (il)legally organized in this context of the Southern part of the West Bank (South-East of Hebron). As explained occasionally on this platform, Areas A (full civil and security control by the Palestinian Authority), B (Palestinian civil control and joint Israeli-Palestinian security control), and C (full Israeli civil and security control) correspond to a fragmentation of the West Bank per the secretly signed Oslo Accords in 1993. 63% of the West Bank is included in Area C, which thus form a milieu surrounding the islands of the “Palestinian Archipelago” (see past article/maps). This agreement, beyond its obvious legitimization of the Israeli occupation, only applies to security control. Despite the fact that they serve to determine the Oslo territorial fragmentation, the Israeli civil settlements that host about 500,000 inhabitants (East Jerusalem not included), remain fundamentally a violation of the Fourth Geneva Convention. The two settlements involved in the direct neighborhood of Al-Karmil are Carmel and Ma’on (see below), which, despite a relatively small population, constitute for the Israeli government what it considers as a buffer protection between the Palestinian ‘islands’ and the South part of the 1949 Green line that determines the West Bank territoriality (which used to be under Jordanian control between 1949 and 1967). Such a strategy is made explicit by Ariel Sharon in his Memoirs, where he recounts his advocacy for the construction of more Israeli settlements in the Sinai in the late 1970s (when he was Minister of Agriculture), in order to constitute a line of defense in occupied territory. The essentialization manufactured between Palestinians and Israelis also appears in the urban design and architecture of the old Palestinian villages and the suburban looking Israeli settlements. This does not simply indicate two different ways of life and social conditions, it also has military purposes, as Eyal Weizman explains in his (excellent) interview with Al Jazeera: the orange roofs of the settlements are clearly recognizable in contrast to the Palestinian homes, in order for the Israeli army aviation to recognize them as such. 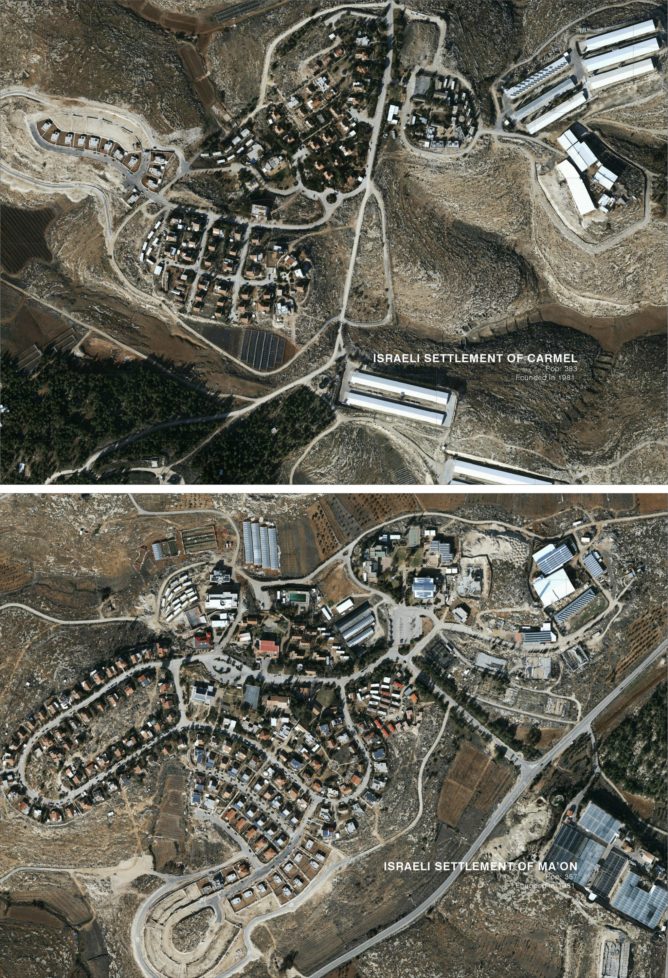 3. Why Swimming Pools Are Not Innocent Spaces ///

What these two events fundamentally share is their centrality on two swimming pools, and, although, we could consider this specific place as any other sites of leisure, it is my conviction that we should not. First of all, the swimming pool is the space of the (quasi) naked body. Naked bodies involve in no-way a form of corporeal truth (a rationale as cliché: “the body liberated from its artifices”…), but they certainly render them fragile in the absence of sartorial defense. The testimonies of Palestinian men swimming in the Al-Karmil swimming pool and forcefully evicted by the Israeli soldiers reflect this absolute contrast of the military gears/weapons and their own nudity. In McKinney, what adds to our horror is the nudity of the teenage girl being assaulted by the police officer, which thus engages the imaginary of sexual aggression.

Swimming pools form an aquatic milieu. In his testimony, Ibrahim Abu Tabikh, a Palestinian teenage boy who was swimming in the Al-Karmil pool recounts: “The settlers complained about our being in the pool and three young settlers started swimming towards us” (source). Although B’Tselem did not make the inventory of any physical violence causing injuries during the invasion of the swimming pool and that intent of such a violence from the Israeli settlers cannot be presumed, it ought to be reminded that water is fundamentally a dangerous milieu for human bodies and that someone can be drown and killed in it in the time lapse of a few seconds.

The last thing that characterizes the aquatic milieu of the swimming pool has more to do with a more or less conscious psychological reaction to this milieu. Water, in its appreciable materiality (in opposition to air), expresses the fact that the bodies situated within it, share a milieu. It thus invokes an imaginary based on the transfer or not of material elements between bodies, in particular, dirt. In other words, water makes it less tolerable for bodies to share a milieu with bodies considered as dirty or abject. Abjection does not however merely stop at the actual aspect of a body ‘ornamented’ with conventional dirty elements, it is also defined by what anthropologist Mary Douglas calls “matter out of place” (Purity and Danger, 1966). The abjection that characterizes racism is thus ‘hypertrophied’ when placed in the aquatic context of the swimming pool, hence the necessity felt by bodies presuming of this abjection to evict bodies considered as abject from this milieu, and thus the two events described in this article. Muhammad Mahaniyah, a young Palestinian man who was swimming in the Al-Karmil swimming pool before being forcefully evicted by the Israeli soldiers offers us the following conclusion: “I had no problem with the settlers swimming along with me” (source). Just like racism, abjection is not symmetrical; both manifest the manufactured relationships of power involved between essentialized bodies. These two events, which have been made broadly public on the contrary of many others, illustrate this violence.

Acknowledgement: A big thank you to Constant Harbonn for his help to access some territorial data on which this article relies.