Léopold Lambert – Paris on July 19, 2016
If you enjoy articles of the blog, have a look at The Funambulist Magazine!

This article is written in the continuity of two others that described the relationship of the French State and its police with the numerous demonstrations organized in opposition to the new labor law project since March 2016. While the first one, “Police Brutality Is a Hollow Term” (May 31, 2016) insisted that we should not look at police violence as a punctual (and rare) episode of spectacular force, but rather as the very function of the police experienced in particular by the banlieues residents, the second one, “Architecture Under Attack” (June 16, 2016) was examining the demagogic instrumentalization of the (minor) damages caused on the Necker Children Hospital in Paris during one of the June 14 demonstration. This present article considers the demonstration that followed the latter, as the potential paradigm of the future spaces of protest in our cities, in particular when such measures are deployed during a neocolonial (now newly-renewed) State of Emergency.

The political context described in the article cited above is important to understand this present one. Strengthen by its dubious spectacle produced through the images of broken bank and advertising windows that the June 14 demonstration caused through a faction of so-called “casseurs” (breakers), the government granted as only option for the June 23 demonstration a static gathering on the Place de la Bastille in Paris. Such a proposition by the government and the police prefecture was categorically declined by the seven unions organizing the demonstration — the largest one being the Confédération Generale du Travail (CGT) — which led the police prefecture to ban the demonstration altogether on June 22, triggering an outrage from all citizens attached to the right of protest. A few hours later however, an agreement was found between the unions and the government to organize the march from and towards the Place de la Bastille by looping its trajectory around the Port de l’Arsenal in a total length of 1.5 kilometer, as the two maps below illustrate. In agreeing to this option, the unions may have thought to save their face but committed  instead to a dangerous precedent. 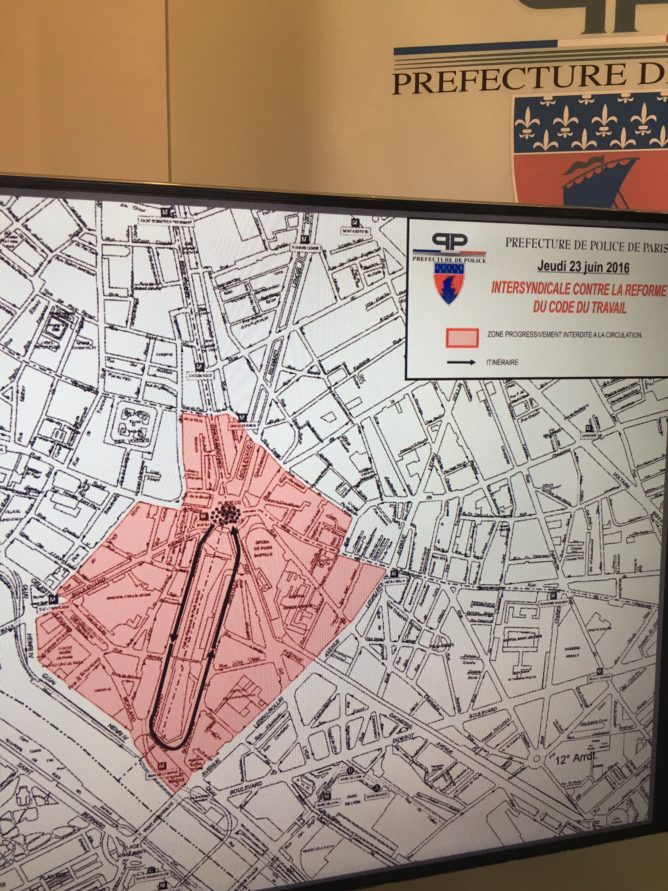 What the map of the police prefecture above does not show is the double layer of police checkpoint set up around the red zone preventing any vehicles to penetrate within the perimeter, as well as around the course of the demonstration (see below) that are the topic of this article.

Map created for the purpose of this article. Click to see a larger version.

The particularity of such a historically short path for a demonstration consists in the ability for the police to control every point of access to it. As the photographs below illustrate, mobile foldable fences were set up around the Place de la Bastille, while other streets were blocked by ‘walls’ of police vehicles. Such a formation allowed the numerous deployed police officers to set up checkpoints and search every single person wanting to enter the ‘premises’ of the demonstration. While it was apparent that these officers had received specific orders to interact in a civil manner with the demonstrators, any person holding an object that could be associated closely or remotely to a potential conflict with the police was refused the access — I had to leave my bicycle helmet to a local hair dresser for instance. 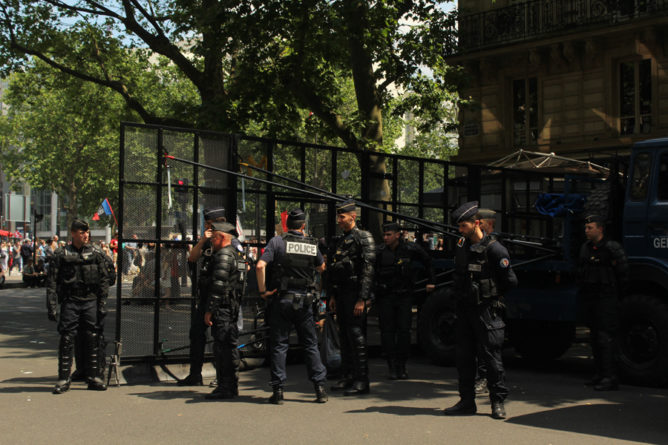 In the current paranoid context that France currently experiences, in which the masculinized spectacle of security primes over actual security, these searches by the police echo the ones that have become customary when entering public buildings and large stores since the 2015 attacks in Paris. Such an echo maintains a confusion between the arbitrariness of these attacks and the targeted political action undertook by the demonstrators — as explained in the previous article, this confusion has sometimes reached some disturbing moments of explicitness.

More generally, these practices consecrate the logic of control manifested in the management of private spaces receiving the public. What I mean by that is that what is policed is not as much unlawful behaviors as such, as the hints of a potential unlawful behavior, as well as any behavior that would somehow escape this control. In private spaces, this manifests through the implementation of rules (that usually transform into norms), in addition to the law. In public spaces, by definition less controllable, it materializes through the large deployment of armed police forces, in particular at its access points. Such a “privatization” of public space had already found an occurrence in the systematic search of persons wanting to access the Place de la République in the evening when the political movement Nuit Debout was gathering. But, more broadly, we should read the genealogy of this practice through the figure of the colonial suspect. 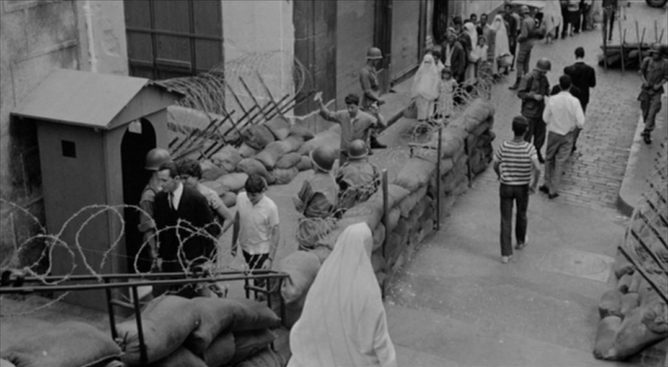 Still from Gilo Pontecorvo’s film The Battle of Algiers (1966)

A classic reading of colonial history may bring us to 1957, when the French paratroopers deployed in Algiers enforced such checkpoints all around the Casbah from where the Algiers-branch of the FLN was leading the Algerian Revolution. However we should also insist on the neocolonial dimension of our time: although the police action in the banlieues does not materialize through fixed checkpoints filtering access to a particular space, the systematic searches that the Brigade Anti-Criminalité (BAC) conducts on the racialized youth of these residential neighborhoods also correspond to the same intrusive and violent logic — not to mention the 3,000 house searches that the State of Emergency has allowed since November 2015 (see past article). In this regard, it is not innocent that the BAC was formed in 1970 in the continuity of a genealogy of police brigades all involved in the policing of colonial cities: the Brigades Nord Africaines, the Brigades Agression et Violence (BAV) and the Brigades de Sécurité de Nuit (BSN) that they ultimately replaced (see the work of Mathieu Rigouste). These brigades are the consecration of the police targeting of the suspect. In their anticipation of unlawful behaviors (rather than on their cessation), they are required to form a figure of the suspected body that would be susceptible to adopt such behaviors. Of course, this formation is fully subjected to both the collective and individual imaginary of what this figure looks like and the colonial subject is almost always fully confused with it. The search of the suspect is thus a confirmation of suspicion and any unfounded result (the overwhelming majority of the time) is interpreted as a success from the suspect to hide what would incriminate him/her, rather than as a profound institutional failure. This vision is often reinforced by the “suspect” him/herself as this process usually induces an illegitimate sense of guilt. This systematic practice of police searches is to be distinguished to a certain extent from the ones undertaken at checkpoints, since the latter involve a higher sense of territoriality in the threshold between two milieus they involve, yet they can be associated through this figure of the suspect, since the checkpoints’ specific location targets specific bodies — in this case, demonstrators. 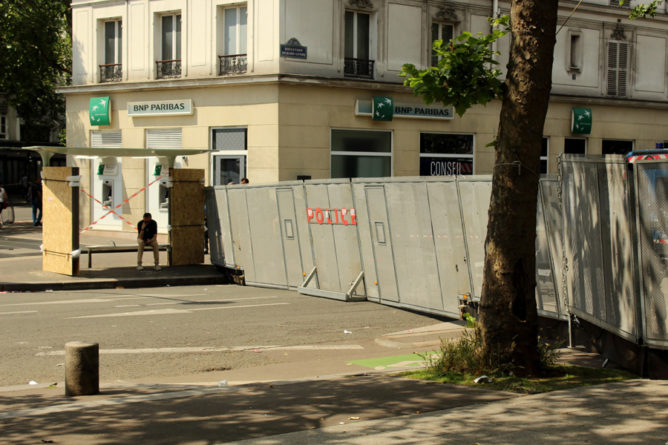 Although the protesters to the labor law cannot be assimilated with the post-colonial population of France — union representatives remain predominantly white and male bodies — the colonial project and its figure of the suspect is thus at the core of the way spaces of political affirmation/opposition are envisioned in our cities. This political affirmation/opposition is allowed — we might want to use the term tolerated — but the conditions in which it is embodied are to be fixed and enforced by the State and its police. In this regard, the ideal instrument to materialize the control of an environment remains irrevocably architecture.

While many architects and students in architecture are interested in questioning in what would consist the design of a democratic space and/or a space for protest, they usually do so in the illusion of a politically neutral architecture (an architecture of consensus). While it is true that architecture does not necessarily serve policing function, it seems primordial to me that we consider how easily it does serve such a function. This easiness comes from architecture’s intrinsic violence and propensity to enforce a schematic organization of bodies in space. A truly “democratic” architecture is therefore impossible to achieve; what is achievable, on the other hand, is the construction of an architecture serving democratic political programs. Such programs, in order to exist need to confront the conditions that prevent them from existence. It is precisely in the context of this opposition (against the police for instance, but not exclusively) that architecture’s political power can be used for “minor narratives,” and be successful in doing so. The June 23 Bastille demonstration, on the other hand, is here to remind us of what the future designated spaces of protest will look like should we not oppose it. 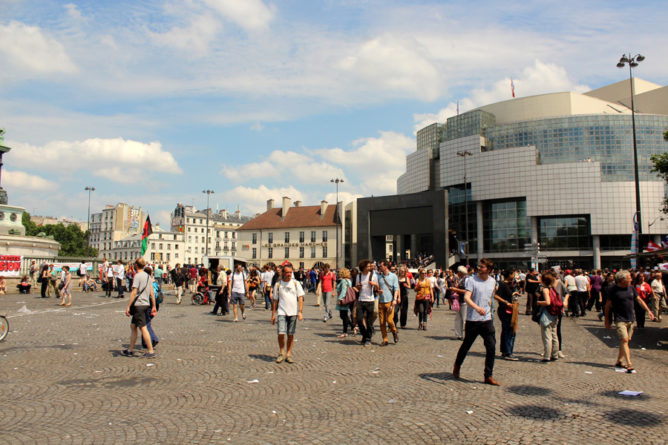 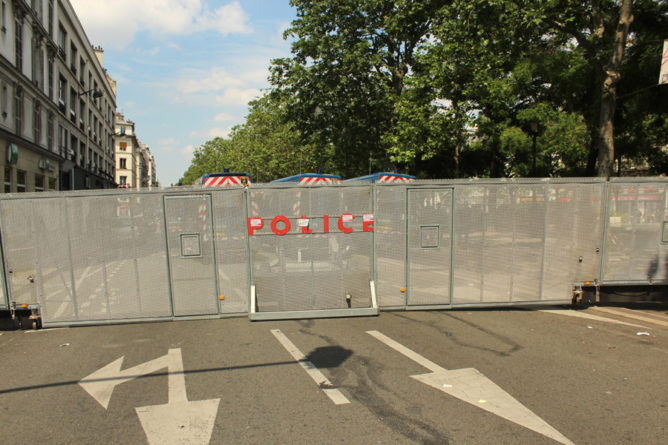 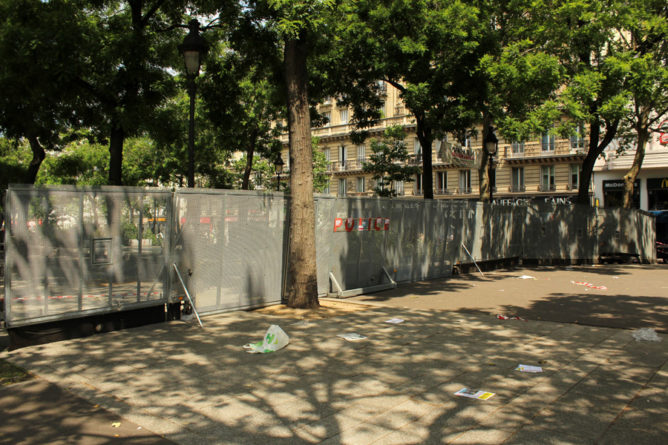 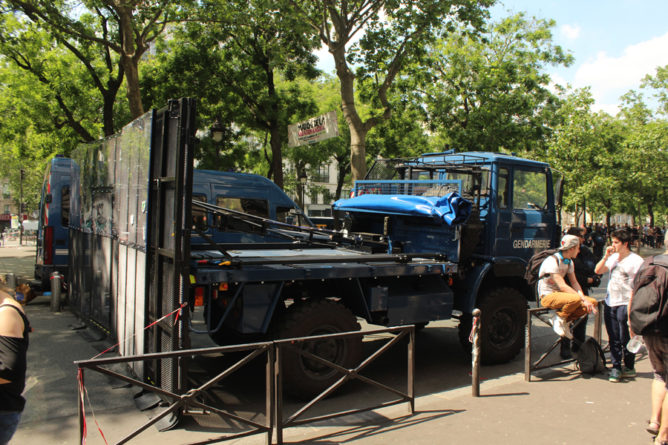 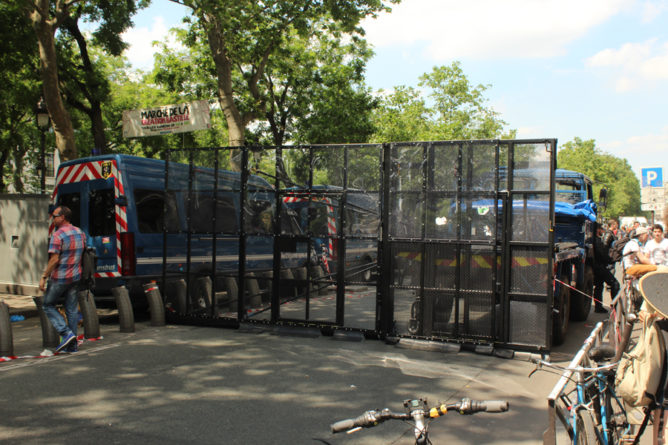 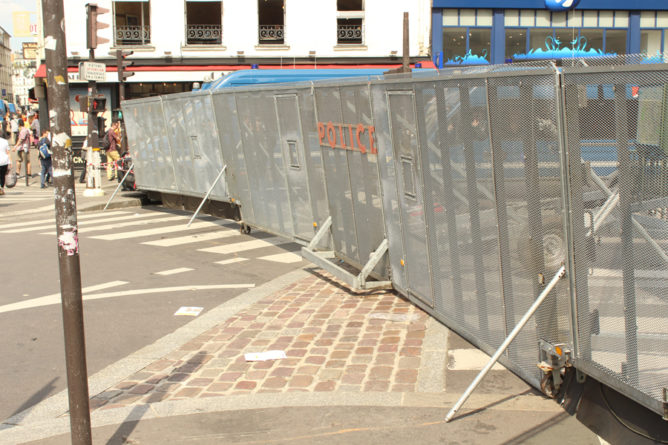 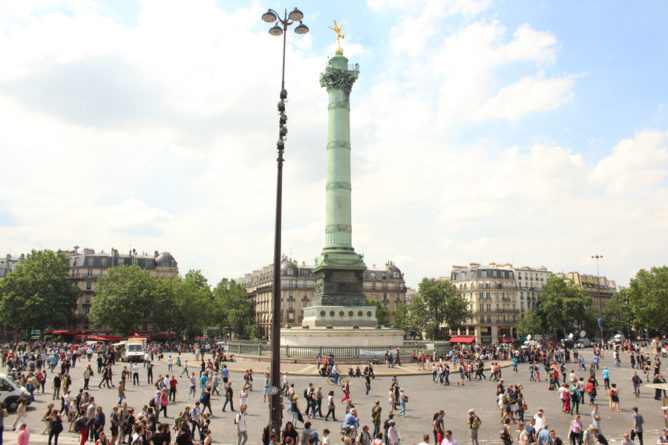 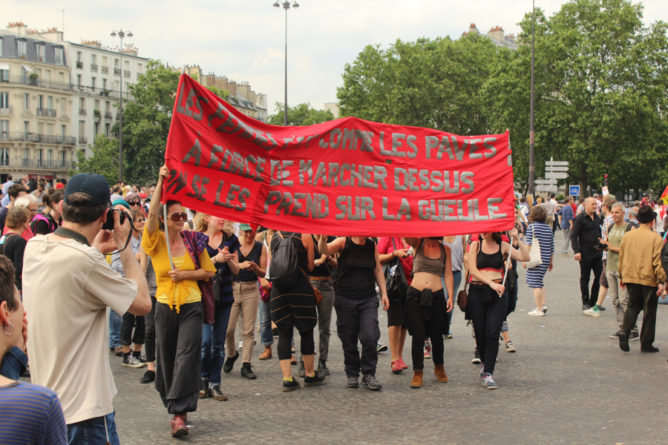 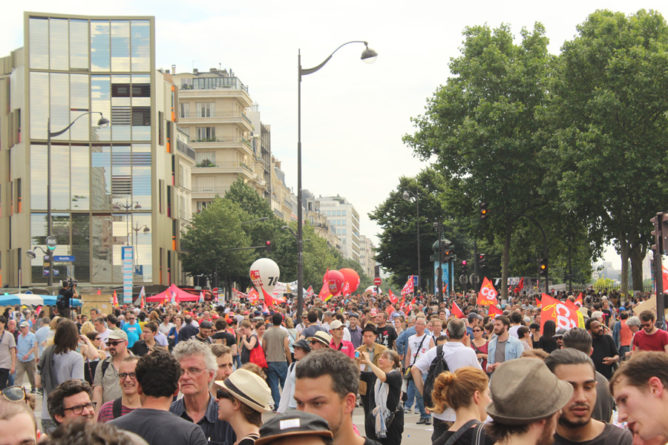 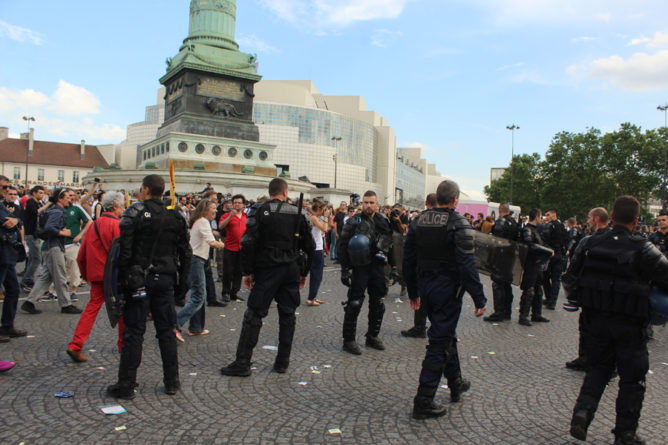 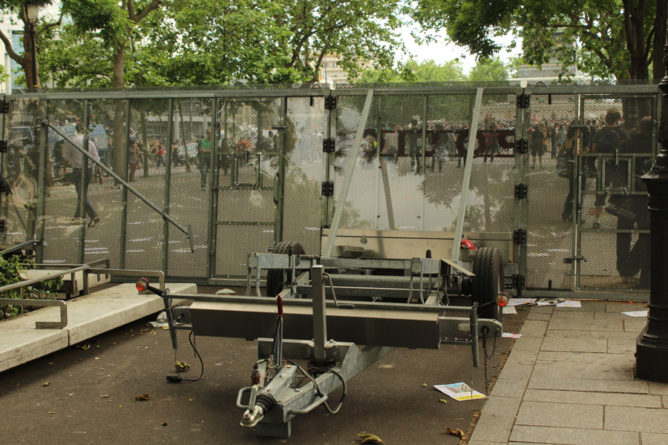 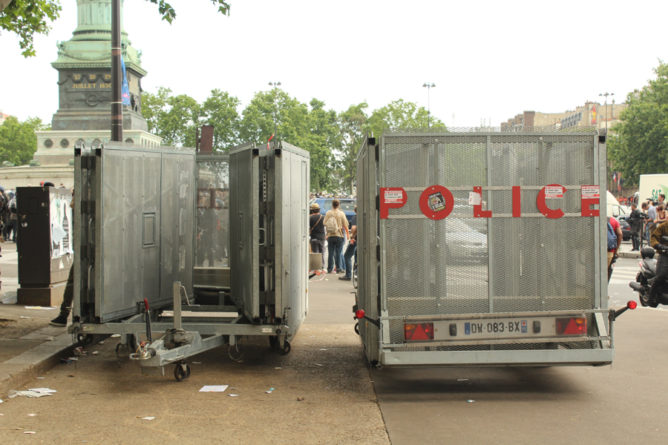