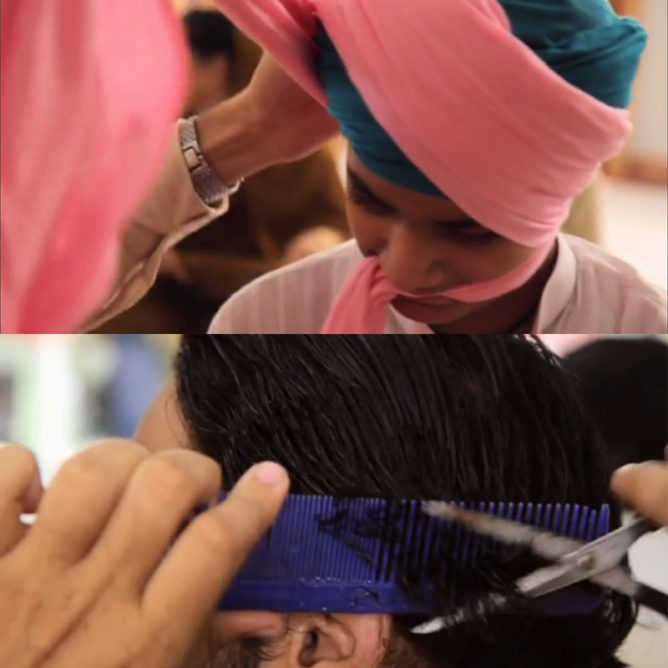 Still from the film Roots of Love by Harjant Gill (2011)

This article follows the previous one about the hijab as a complex cultural wearable object. This time, a similar complexity is examined in another wearable object: the turban, wore by men in Sikhism. Similarly than for the hijab, this piece of garment establishes a clear separation of genders within the religious community, but even more importantly, it allows its members to “be counted” within a society that counts members of other communities (Sikhs represent 60% of the Punjab population, and only 2% of the population in India). In order to explore this complexity materialized into a long piece of fabric folded numerous times around one’s head, we should look at Harjant Gill‘s short film Roots of Love (2011).

This short documentary is an important piece of anthropological investigation of young Sikh men in Punjab. Many of them grow up in a rural and traditional familial context and, when brought to migrate to the cities (the capital city of Indian Punjab, Chandigarh in Roots of Love), they often question their traditions in favor of a more secular way of life. What this article tends to examine however, is not as much the anthropological-religious aspect of these young men’s mutation, but rather the corporal and sartorial aspects of it. These aspects are multiple as each Sikh male body has to present what is called “the Five Ks”:
– Kesh: unshorn hair that needs to be covered by a dastar (turban)
– Kangha: wooden comb to be used twice a day
– Kara: iron bracelet
– Kirpan: dagger
– Kach: cotton undergarment

Roots of Love shows the Dastar Bandi ceremony, the rite of passage of a young Sikh boy during which he starts wearing the turban. These images are put in explicit contrast with the trajectory of a young man who moved to Chandigarh and who stopped wearing the turban and cut his hair, which is unequivocally considered by the persons interviewed in the film as the expression of exiting Sikhism. Ceasing to wear a piece of garment is revocable (we see him wearing it when in presence of his family) but, as the film illustrates, the fact of having one’s hair cut constitutes an even greater passage due to its ‘ceremoniality’ and its temporary irrevocability. What Gill shows in his film is that there is as much symbolical power in a rite of passage that makes a body enter a community through the religious pomp, than there are in the profane ceremonial of cutting a young man’s hair when it means his departure from religion.

What the specific example of these young Sikh men helps us to understand, is that the body and its clothing cannot possibly be innocent when presented to society. The degree of meaning associated to a garment, a position of the body, or the way it looks varies depending on the collective understanding of this semiotic by communities. This collective understanding can also be a collective misunderstanding. That is how an important amount of Sikh men wearing the turban in the United States have been verbally and/or physically assaulted following the 2001 terrorist attacks in New York and Washington DC. The “misunderstanding” (a soft euphemism) characterized by the association of the Muslim and the Sikh communities to these attacks illustrate the profound ignorance in which this semiotic is effectuated when the considered community is in minority in a given society.