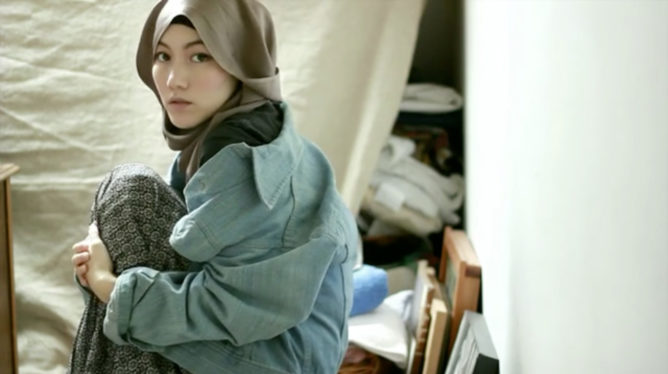 Hana Tajima, a designer that creates apparels that include hijab for some of them, and not for some others (courtesy of the artist)

In 2004, the French government presided by Jacques Chirac designed a law that obtained one of the largest majority of his administration in Parliament (494 votes for, 36 votes against). This piece of legislation was forbidding any sign or cloth that manifests “ostensibly” the religion to which the body wearing it belong at school. French politicians all spoke together when they say that it was not specifically subjecting Muslim young women’s hijab but also all other religious signs — they also say that “discreet” Christian crosses were tolerated! The debate that occurred through this law — again, not in Parliament that was not far from unanimity — revealed an intelligentsia in France that used the sacred secularity (oxymoron used purposely!) as a flag and targeted every one who disagreed as “anti-feminist.” Now the fact that these people proclaim themselves feminist while forcing some women to unveil can appear paradoxical. The refusal to integrate any complexity to their way of thinking reveals that their arguments were more based on the visceral islamophobia that currently animates the Western world, rather than a true will to understand what lies in this piece of fabric.

The first mental operation that a reflection on a object like the hijab is consists precisely in starting from its objective characteristics: it is a designed object, a piece of clothe that can be wore just like a hat, a cap or a hood. In a cold day like the one New Yorkers just lived (sorry for the geocentrism!), almost all the bodies you see in the street are wearing something on their head, thus minimizing the surface of bare skin that is accessible to cold air. Let’s insist on the fact that the hijab, as a piece of clothe, does not hurt physically the body in any way. Now, let’s intensify this object by attributing it a religious value, that means, a group of people who form of community through their common faith choose a set of rules for their community. One of these rules can consist in the recognition of two genders within — I insist on “within” — this community and determine an appropriate apparel or dressing code for each of these genders. In the case that each body concerned by these rules is willing to accept them for his/her own way of living, it seems difficult for someone from outside the community to have a problem with it. After all, I do not remember hearing any criticisms about the way Christian nuns dress within their own community. Now you have a religion called Islam that the Western intelligentsia and politics do not to even make the effort to learn about the different communities that this religion regroups and that are sufficiently different that some of them are sometimes at war with each other.

In 2011, Egyptian American scholar Leila Ahmed wrote a book entitled A Quiet Revolution: The Veil’s Resurgence, from the Middle East to America (Yale University Press. thanks for the tip Mimi). Through it, Ahmed explains how she originally underestimated the hijab’s cultural complexity before she started this research. The latter shows that in the case of a country like Egypt whose majoritarian population is Muslim, the fact that an important amount of women unveiled in the 1950s and that the following generation started to wear the hijab two decades later has little to do with the devotion of these women and their families, but it has more to do with the currents that can be found within Islam. For example, Ahmed attributes the resurgence of the veil in the 1980s to the growing influence of the Sunni political and social organization of the Muslim Brotherhood in Egypt. Ahmed bases her research on the work accomplished at that time by Arlene Elowe Macleod who observed that there did not seem to be any correlation between this dressing habit and the “increase in religious observance” (Ahmed, 121).

Ahmed does not talk about the case of Iran, but such an example is illustrative of the nullity of violence contained within the hijab itself as an object. As pointed out by Mimi Thi Nguyen, in an article entitled “You Say You Want a Revolution (in a Loose Headscarf)” (we also evoke its contents in our Archipelago conversation), the Western-backed Shah had enforced unveiling on Iranian women in 1936. After the 1979 revolution that led to the creation of the Islamic Republic of Iran, veiling was declared mandatory for female bodies. Nguyen summarizes this two (male) enforcement on female bodies as such: “we must recognize how both forced veiling and forced unveiling operated as disciplinary state edicts — often enacted violently on female bodies by male soldiers or police — at discrete political times to instrumentally shape a feminine civic body” (Nguyen, 2009).

It is therefore impossible to systematically associate the hijab with a unique component of its history, geography and culture. The second part of Ahmed’s book that focuses on the resurgence of the veil in post 9/11 United States and Canada, does not express anything else. Confronted to a raise of islamophobia following the terrorist attacks in New York and Washington DC in the name of Islam — once again, you really need to refuse any form of complexity to associate these specific attacks with a billion other people in the world — many women felt that they needed to make their identity visible as a form of solidarity and resistance — despite the risks of verbal and physical aggressions they were running. “I’m wearing it because I understand how it marks you as an object for someone else’s hatred…” told a woman (Ella Singer) to Ahmed (p206). Forming a deliberate political community resisting against antagonistic norms that forced it into a set of categorized expectations, require some means to recognize each other indeed. That is not to say that the hijab is the only of these means, but it is a rather obvious one in the way it composes a recognizable public body. Other testimonies collected by Ahmed recount the feeling of freedom experienced by some of these women when wearing the hijab, thus adding an additional layer of complexity to this piece of clothe systematically associated to the exact opposite essence.

Ahmed finishes her book by insisting on some on-going feminist works that are undertaken by (hijabi or not) women from within Islam. This last chapter is fundamental as it recognizes the evident existence of issues — many of them are gender based — created by some opportunist interpretations of the Quran, but it also illustrates how these problems are addressed directly from inside, independently of the fetishes like the hijab brandished and fantasized by Western media and politicians to develop a colonial ideology. Apparatuses ‘from the outside’ like the law in the case of countries whose population is minoritarian Muslim, could not possibly change anything to these problems; they only demagogically designate a community as problematic and thus excluding it de facto from society.

NOTE ///
I will soon write another article about the turban wore by male Sikhs as sharing similarities in how it concentrates a symbolic and cultural weight within another piece of fabric. I also would like to draw my readers’s attention to the fact that I created a new archival category, “Dressed Bodies,” about this design object that is the clothe, about which I feel very little legitimacy to write about, but I am nonetheless trying!