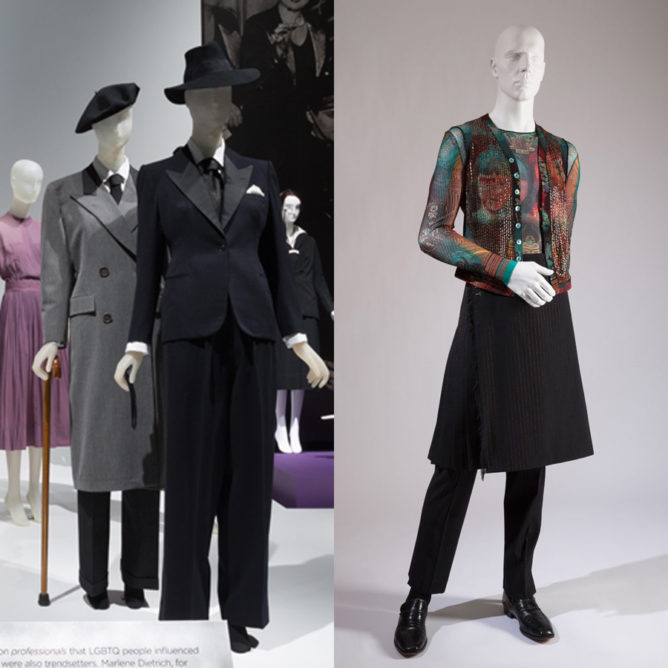 This article is based on two books (only in French) written by feminist historian Christine Bard in 2010. The first one is Une histoire politique du pantalon (A Political History of Trousers) and its immediate ‘sequel’ is Ce que soulève la jupe (What Brings up the Skirt). Both books focus on the specific case of historical and contemporary France; however, the detailed documentation of Bard’s research allows a deeper questioning about the relationships between clothing and gender that can be extended, at least to the Western World in general.

Bard starts her political history of trousers with the 1789 French revolution and the quest for a shift of paradigm vis-a-vis the ancient regime combined to the medical observation than the old trousers (culotte in old French) tend to make men sterile. On the second year of the first French Republic, a decree stipulates that “nobody of any sex could constraint any male or female citizen [citoyen ou citoyenne] to dress in a particular manner,” as well as the fact that “each is free to wear any clothing of his or her own sex per his or her preference.” The etiquette of the monarchy is thus destroyed and any body becomes free to wear anything (s)he might want providing that this clothing belongs to his or her respective gender.

Before even addressing the relations of power unfolded by this division of society into two genders, we can note a few functional characteristics inherent to clothing that prevent the female body from the liberty of movement given to the male one (my translation):

George Sand is one of the rare exceptions to the rule that wants that all flaneur be men. In order to be a flaneur, to embrace the world, one has to walk a lot and for a long time. The entire [female] fashion conspires against this freedom: dresses, hats, shoes promise women to sedentariness. (Christine Bard, Une histoire politique du pantalon, Paris: Seuil, 2010, p64)

Moreover, the openness that defines dresses and skirts, on the contrary of closed trousers, “maintains women to a state of a permanent sexual accessibility” (Bard, 326, my translation). When wearing them, a care needs to be therefore brought by each body in its bodily positions for the opening of the cloth to virtually (but not effectually) deny this accessibility — something familiar for anyone who has worn once an open cloth of any kind.

Nevertheless, what Marie-Thérese Besse and Olivier Burgelin call “the clothing apartheid” between genders goes beyond the physical inherency of the clothes attributed to each gender — after all, a very important of non-Western nations carry gendered clothing that can be assimilated as skirts or dresses for each gender. Just like many bodily characteristics that have nothing to do with the biological separation of sexes (length of the hair, depilation, make up, etc.), clothing is thought as a physical means to characterize, and thus recognize, each body according to two normative canons that we call genders. Such a definition of gender could almost be interpreted as a form of contract that would give to each body the choice of the gender to which it wants to belong. Gender is however attributed systematically in the form of our birth ilocution (a locution that enacts what is describes): “it’s a little boy!” or “it’s a little girl!” resisted by Janet Mock when she replies “I was born a baby” when a journalist wants to force her to admit that “she was born a boy.” Not only each body is being systematically attributed a gender, but the male gender is understood to be dominating the female one. Since clothing participates actively and dramatically to the construction of gender, the subversion of its gendered characteristics leads to the subversion of the relations of power themselves.

The political history of trousers beyond the French revolution therefore constitutes the struggle for female bodies to be able to wear it socially. The obstacles are normative but also legal: for example, in 1800, Paris’s police commissioner establishes an ordinance forcing women who would like to dress “as men” to ask for the prefecture of police’s authorization since these women “are exposed to an infinity of annoyance as well as potential misunderstanding from the policemen themselves.” It ought to be noted that such ordinance has not the same value than a law to the point that this ordinance was actually never revoked and still technically exists.

Bard quotes physician-activist Madeleine Pelletier who was wearing what is understood as a male suit in 1919: “My suit says to men: I am your equal” (Bard, 237, my translation). Bard describes the struggle of other women who, during the 19th and 20th centuries struggle to wear trousers, sometimes even against groups of feminists who did not see the reproduction of male characteristics as liberating for women. She finishes her book reminding that this struggle is not fully over in the professional world yet. She also notes that, in certain urban contexts, it is now the skirt that became difficult to wear for young women as their male counterparts characterizes them as signs of sexual invitation that trigger all kind of verbal and physical oppressions.

This is how her second book, Ce que soulève la jupe, begins. In parallel of the struggle to gain access to trousers, the skirt has also evolved by diminishing its surface of fabrics, thus allowing the legs to be visible in public. This is how certain states of the US made laws to determine what is “the reasonable height for a skirt’s hem” (Christine Bard, Ce que souleve la jupe, Paris: Les Editions Autrement, 2010, 31.). In France, the specific context of the suburban proletarian cities (cites) in its daily violence — a violence that has much more to do with the state of exclusion in which these neighborhoods are situated than the myth of intrinsic violence within proletarian populations — offers no choice for female bodies (nor for male ones for that matter) to forms of femininity that the skirt could facilitate. Again, this struggle is more about the choice itself than a necessary need for what is understood as feminine.

In the second part of the book, Bard also addresses the political choice of a few male bodies to wear skirts. This act is not always described explicitly as political by their authors but there is no doubt that the public body that the skirt composes in association with recognizable male bodily characteristic is necessarily a target for the various ostracisations that go with the subversion of the norm. Several fashion designers like Jacques Esterel, Jean-Paul Gaultier, Yohji Yamamoto or Rei Kawakubo have integrated the idea that male bodies could be wearing skirts or dresses, but such a political positioning against the essence of gender remains rare ‘in the streets.’

Because our body often offers more fabric than skin to the regime of social visibility, clothing remains a strong vector of characterization by normative processes. Such a characterization does not only touch the domain of gender, but the fact that most of the shops where we buy clothes still separate what is understood to be clothing for women, and clothing for men, is highly symptomatic of the fact that the struggle against the essentialization of the bodies is far from over.