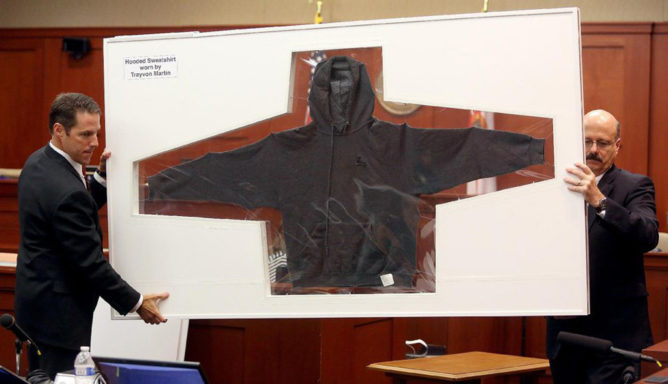 Text written last year for a publication that finally refused it ///

Our bodies do not form a society in a vacuum. They are embedded within a multitude of designed elements of various scales that all participate to a certain degree to these relationships of power. Urban design and architecture often play a tremendous role in exacerbating normative process, but this is also the case of another design element: clothing. Clothes are what Mimi Thi Nguyen calls the “epidermalization” of the public body (see our first conversation for Archipelago): they compose an epidermic surface that comes as an additional layer subjected to recognition and reaction in regard to the norm, as well as normalized expectations regarding the body. This is how a piece of cloth like the hoodie crystalized a set of racist and social expectations in Trayvon Martin’s murder by George Zimmerman in February 2012 as Mimi introduced in a lecture entitled “The Hoodie as a Sign, Screen, Expectation, and Force” (July 2013). The hoodie’s role was so crucial in this tragic event that it was part of the forensic items presented by the prosecutors during the trial of Zimmerman in June 2013 – which creates other problems that I attempted to address in the article “Fashion Forensic: The Cloth as (pre)judicial Evidence“. This cloth was even discussed to be acquired by the Smithsonian as an important piece for National Museum of African American History and Culture – this information, although denied by the Smithsonian, is more problematic for the spectacularization of a tragedy than for the idea that Martin’s hoodie is linked to the African American history.

Racist and social expectations materialize in the context of modern policing, which no longer restrain itself to investigation and suppression but now dedicates most of its activity to anticipation and prevention, something relatively new in the historical existence of the police. Anticipation implies a fantasized narrative informed by a collective and individual imaginary. In order to inform the narrative, it builds upon a set of expectations based on characteristics proper to the body itself, but also to clothing and its normative properties. Because of the necessary participation of collective and personal subjectivities to the process of anticipation, we could say that this particular function of the police and its privatized versions is fundamentally discriminatory. These subjectivities are informed by the norm and, through the policing processed, reinforced in their essentialization.

The polemical New York policy of systematic “stop and frisk” elaborated by ex-Mayor Michael Bloomberg with his Commissioner of the Police Department, Ray Kelly, is highly illustrative of the police’s expectations based on clothing and skin color: 87% of the people stopped by the police were either African-American (55%) or Hispanic (32%) (2012 figures from New York Civil Liberties Union). The fact that 98% of the stopped bodies did not carry any illegal item of any kind can only be justified by the police with the claim that this overwhelming majority is the paradoxical exception, not the rule. In France, a law accounting on police discrimination promised by the campaigning President Francois Hollande in 2012 never saw the day. Frisking in France is not as systematic as is the verification of ID (“Vos papiers, s’il-vous-plait!”), thus anticipating the foreign and illegal status of the stopped bodies, something impossible in the North American sanctuary cities (see past article).

The legitimacy of the police is however to recognize the illegality of behaviors, not the apparent characteristics separating a body from the norm based on fantasized expectations. Through this practice, the police and its avatars confuse normality with legality and abnormality with illegality, which develops an exacerbation of the established relationships of power.

What is the role of designers in these normative mechanisms? It would be illusory and dangerous to think that any designed element could operate outside these relationships of power: there is no liberating design. However, examining thoroughly the role we play in them facilitates their subversion and the redistribution of their violence. In other words, the role of a designer or an architect is not to attempt to deactivate the violence contained within any object placed in the public; rather, this inevitable violence can be potentially used against the dominant normative processes.