Léopold Lambert – Paris on June 17, 2018
If you enjoy articles of the blog, have a look at The Funambulist Magazine!

This article, like a few others, is the report of walk done this morning in Nanterre around the location of two of the Algerian shantytowns that the northwestern Paris banlieue has hosted in the early 1960s. In visiting their past location and their direct environments, we encountered four commemorative plates related to France’s colonial history, which are more descriptive through what they keep shut rather than through what they say. 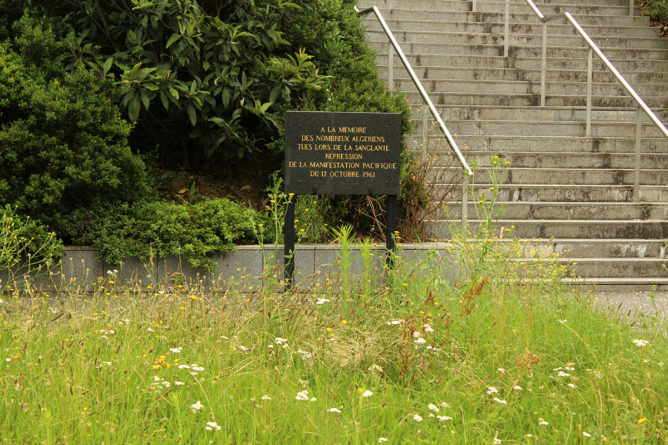 The first one was found on the former location of the largest shanty town in Nanterre: La Folie. No trace is left of what was the home of 10,000 people and one of the key site of the Algerian National Liberation Front (FLN) towards the end of the Revolution (1954-1962). The Hauts-de-Seine Prefecture, situated in part on the former self-built town, even gathers an important amount of police vehicles that recalls the police harassment that most its inhabitants were experiencing on a daily basis. Stuck between the prefecture and an insurance company headquarters, a small piece of vacant land suggests the absence of memorialization of La Folie shantytown.

This is where we encounter the first commemorative plate. Situated next to a staircase next to the insurance company building, this is where one would expect to find a trash can. The granite plate (of reasonable proportion, one has to admit) reads: “To the memory of the numerous Algerians killed in the bloody suppression of the October 17, 1961 pacific demonstration.” Here again, the silence is louder than the words uttered. The fact that many of the Algerians killed during the massacre of October 1961 (see the extensive article about this historical episode in past article) were living in this very space cannot be guessed based on the surroundings of the plate. The language also fits with the French State’s description of this event, reluctantly acknowledged decades after the massacre: the amount of Algerians killed is to be left unknown (historians have estimated between 200 and 300 of them) and, more importantly, the perpetrators are not to be cited. Charles De Gaulle as President, Michel Debré as Prime Minister, Roger Frey as Minister of the Interior, and the infamous Maurice Papon as prefect of police of Paris in charge of annihilating the FLN in the French capital are not cited, nor are the thousands of police officers mobilized to suppress the pacific demonstrations of Algerians in Paris gathered against Papon’s implementation of a curfew on their sole persons during the state of emergency. In France, the designation of responsibilities on commemorative plates is relatively new. Only in the 1990s did plates start to incorporate the active complicity of the French police to the arrest and deportation of the 76,000 Jews during the Nazi occupation. When it comes to colonial and slavery crimes, those responsible are never pointed. 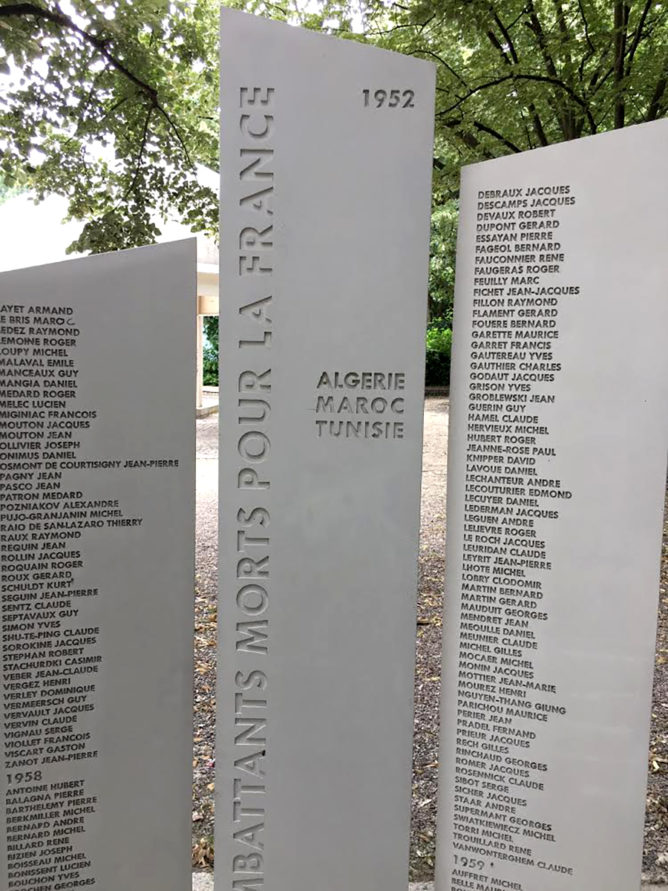 The second plate is located about 50 meters further, also on the location of the former shanty town. This one incorporates the names of all the people it means to commemorate. However, these names are not those of Algerians living in La Folie. They are instead names of French soldiers from Nanterre killed in the colonial wars in Morocco, Tunisia and, of course, Algeria between 1952 and 1962. Only the study of historical aerial photographs allows to understand that this monument is situated at what used to be the very core of the self-built town of La Folie. While the names of each (drafted for most of them) French soldiers who died fighting for France to keep its colonial grasp in North Africa is celebrated, the lives of Algerians who inhabited this site and, for some of them, were massacred by the colonial order in the streets of Paris, are invisibilized. 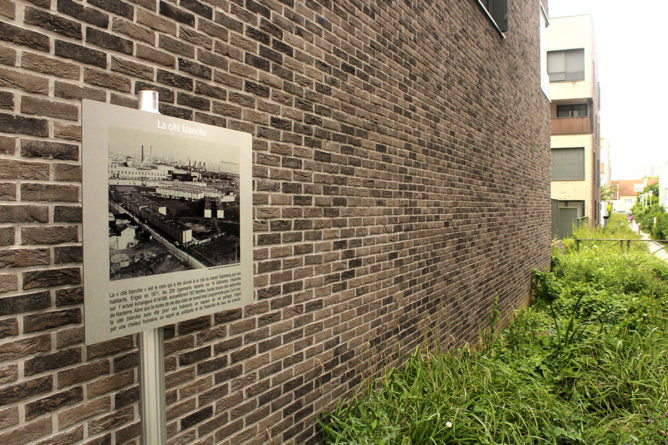 The third plate takes us to the site of another shanty town, located along the Seine River at the northwestern limit of Nanterre. Here again, visitors and residents are given no clue that this park, situated between a highway and a residential neighborhood, contains an extremely telling political geology when it comes to the territorial management of colonial and ‘postcolonial’ populations. The plate is indeed small and discreetly situated in a small street between two recently built residential buildings; however, its content was produced in dialogue with former residents, which gives it a much more expressive memorialization. It reads “The “White City” is the name that was given to the transit quarter Gutenberg by its residents. Erected in 1971, the 200 housing units shared between 16 buildings situated where the highway currently is, hosted 182 families, all coming from the Nanterre shantytowns. Although the duration of the transit quarters was scheduled to be between 3 to 5 years, the white city were for its residents a space of shared life, irrigated by human warmth, as well as a fraternity and solidarity spirit at all times.” The plate also shows a photograph of the “White City,” but not of the shantytown that the transit quarters replaced. 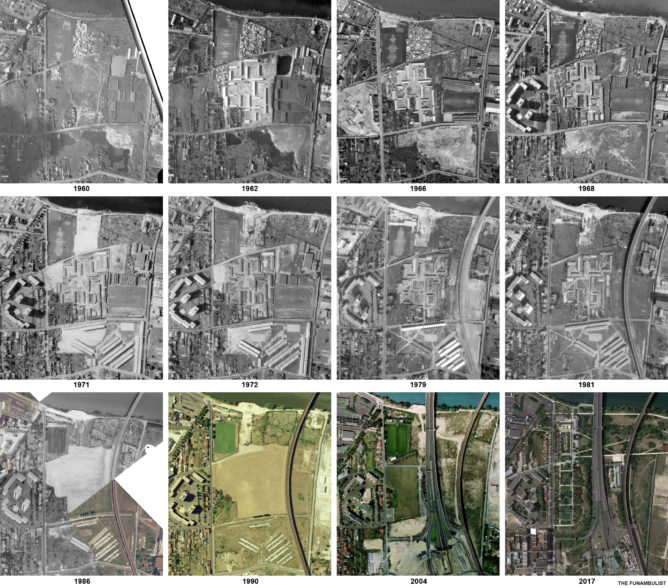 This set of historical aerial photographs offers an understanding of the political geology of this small piece of Nanterre territory: in 1960, the shantytown was standing in a relatively rural area. No latter than two years later, a transit quarter called André-Loucet was built in its immediate vicinity. In 1966, we can see the construction of a permanent social housing complex that still exist today under the name “Cité Komarov” (after the Sovietic cosmonaut, as it was often the case in communist municipalities). In 1971, the transit quarters Gutenberg, or White City is built while the shanty town has been destroyed. The two transit quarters, although designed to exist only for a few years to host the shantytown residents, can be seen to exist until the mid 1980s, i.e. respectively twenty years and fifteen years after their construction. Although the thermal conditions of these buildings were certainly better than the self-built houses of the shantytown, the transit quarters are characterized by the absolute lack of urban quality and the optimization of a policing of space contrasting with the labyinthine urbanism of the shantytown. This is however where important contributions to French antiracism activists occurred in the 1970s and 1980s (cf. Mogniss H. Abdallah’s 2012 Rengainez, on arrive!). Finally, the infrastructure (first a railroad bridge in the late 1970s and a highway bridge in the late 1990s) and the construction of a park in the 2010s achieve to dissimulate the past existence of the shantytown and the transit quarters. 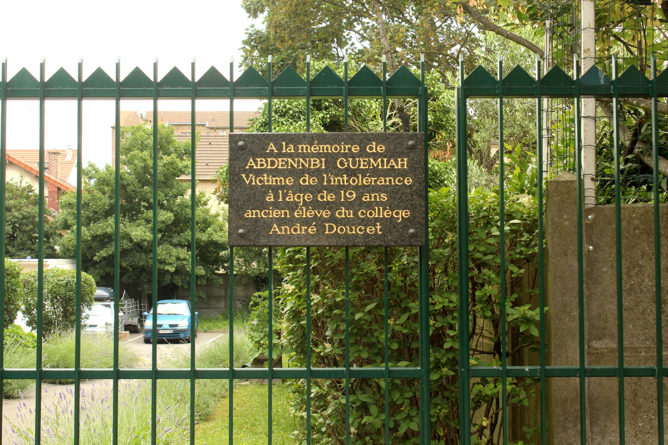 On our way back to the train station, we encounter a middle school and, on its fence a fourth plate that reads “To the memory of ABDENNBI GUEMIAH, Victim of intolerance when he was 19 years old, former student of the André Doucet middle school.” Anyone not familiar with the history of the neighborhood could not possibly guess what this plate is referring to. Abdennbi Guemiah was a resident of the White City and local antiracist activist. On October 23, 1982, he was shot and killed by a neighbor with a hunting gun, like several other Arab and Black youths have in the 1980s. In 2014, a street in Nanterre is named after him, but here again, the terminology of “victim” and “intolerance” is invoked, rather than the one of murder and racism. As for the three first plates, commemoration here is made through a deafening silence. 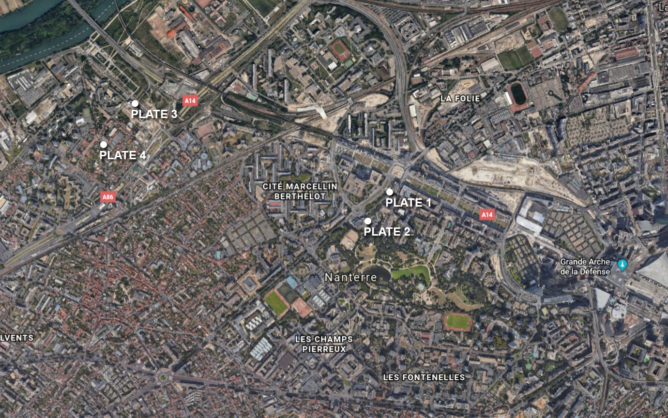