Léopold Lambert – Yugawara on August 9, 2018
If you enjoy articles of the blog, have a look at The Funambulist Magazine!

I recently traveled to Algeria to do some researches for my next book dedicated to the space of the French state of emergency; I am hoping to write a few of these non-rigorous articles about it soon but, in the meantime, I would like to write a short piece about a national liberation struggle against the French colonial empire we usually evoke less often than the Algerian Revolution: the Moroccan liberation struggle. One moment of this struggle is of particular importance when evoking the relationship between colonialism and architecture, in particular when comparing it with the strategies adopted by the successive French governments in Algeria in the years that will follow this specific moment. The event considered here consists in two days of strike and protests organized by the Moroccan worker union confederation (UGSCM) and the main Moroccan nationalist party (Istiqlal) in December 1952, described precisely by Jim House in an essay entitled “L’impossible contrôle d’une ville coloniale?” (The Impossible Control of a Colonial City?”, Genèses vol. 86, 2012). Although this article is partially motivated by the attempt to translate some components of House’s depiction of the 1952 strike (what the first part of this article is dedicated to), it also finds its motive in the absence in his paper of consideration for the massive urban transformation that the colonial authorities were undertaking at that time. This, as well as what it tells us about architects’ responsibilities in the colonial counter-revolution, will therefore make for the second part of this article.

On December 5, 1952, Tunisian nationalist and union member Ferhat Hached is assassinated in a plot that seems to involve the French colonial authorities in Tunisia. As a transnational response, the Moroccan UGSCM and the Istiqlal organize a general strike in Morocco on December 7. This strike finds its core in the shantytown of the Carrières Centrales (now Hay Mohammadi) in Casablanca where over 130,000 colonized people reside. Some of them moved here from rural areas of the country; others were displaced in 1938 from the city center after a typhoid epidemic was used by the authorities as a pretext to destroy smaller shantytowns adjacent to the “European quarters” and expel their residents outside of what were then the city limits. The massive shantytown that therefore exists in the beginning of the 1950s is considered by the French authorities as a political threat to the colonial order — we will see in the second part in what the subsequent counter-revolutionary strategy consisted. Consequently, a specific suppression plan has been created to respond to any anti-colonial movement in the Carrières Centrales: in addition to the French and Moroccan (the latter being under the orders of the makhzen) police officers, the colonial authorities have imagined several layers of military reinforcements such as Moroccan or Senegalese tirailleurs (infantrymen), goums (Berbere military units), and other branches of the colonial army.

The strike originally organized by the Istiqlal is called a “mouse strike.” It consists in simply refusing to leave home to go to work. In the evening of December 7 however, town criers circulates in the shanty town to declare that the strike is forbidden and that everyone will have to open their shops like any regular day. Moments later, the police open fire on residents who were throwing stones at them in response to the interdiction. Demonstrators gather in front of the local police station; some are shot and killed. Police officers then undertake to search the shantytown and enters systematically into the houses, while nationalist activists are arrested. The next day, settlers who live close by are evacuated and more shot are fire by the police in the neighborhood, killing in particular a 15 year-old boy who was digging a trench inside his house to protect his family. In the afternoon of December 8, a massive march is organized, leaving the Moroccan poor neighborhoods and heading to the city center, towards the Union House, where a meeting is scheduled. When later describing the events, the French press evoke the “attempt to invade the European city.” The police fires and kill at least 14 people in the march. Many others are arrested. Some are released in small numbers among a crowd of settlers who proceed to assault them. Meanwhile, important military reinforcements are called to circumscribes poor Moroccan neighborhoods. Scout planes fly at low altitude above these neighborhoods in an effort that has as much to do with surveillance than it has with intimidation. Similarly, light tanks and machine guns parade around the Carrières Centrales. Within the neighborhood itself, the Moroccan police force residents to open their shops and destroy those that remain close, in what prefigures the French response to the FLN-organized general strike in Algeria five years later.

During the days that follow, thousands of police officers and soldiers are deployed in Moroccan neighborhoods, and 1206 people are judged guilty of harming the state orders by the colonial courts. Some of the arrested protesters are tortured by electricity in police stations — here again prefiguring the following years of the Algerian Revolution (1954-1962). 51 French union members, close from the Moroccan Nationalist movement are also deported back to France. As it is often the case with colonial massacres (the state having a strong interest to prevent the archive to exist), the number of protesters killed during these days of suppression remain unclear, but is believed to be between 100 and 300. (Jim House, “L’impossible contrôle d’une ville coloniale?“, 2012).

Architects and the Counter-Revolution ///

As mentioned above, the information provided by Jim House in his essay are extremely valuable, but also miss to mention how the Carrières Centrales were simultaneously the site of a drastic urban transformation that remains today well-known in the history of architecture. The political and historical account therefore fails to involve architecture and, unsurprisingly, most of the architectural account fails to involve the violence of colonialism or does so with too little insistence. During his tenure as director of the Morocco Department of Urban Planning (1946 to 1952) French architect and urban planner Michel Ecochard designed a master plan for the Carrières Centrales, along with his collective, whose name, GAMMA for Groupe d’Architectes Modernes Marocains (Group of Moroccan Modern Architects), deceives about which kind of architects were involved (“Moroccan” here means French and Western in Morocco, such as Shadrach Woods or Georges Candilis).

As mentioned above, this master plan and its recognizable 8×8 meter grid, as well as his (more or less orientalist) attempts to adapt it to the Moroccan population, belongs to the canonical history of architecture. In the rare occasions that the political context of this project is mentioned (not ‘simply’ the French colonial order in Morocco, but also the suppression of the Moroccan Nationalist movement), such a context is understood as the background of the project, rather than its very essence. This is, in my opinion, a fundamental dimension to understand, not simply the role of architecture here; not even only the relationship that architecture maintains with colonialism, but even more broadly, the very function of architecture in its crystallization and enforcement of political orders (and, in a very few occasions perhaps, disorders).

In other words, we should not simply be struck by the fact that the 1952 massacre happened while the urban transformation of the shanty town was happening we should consider this transformation as the colonial effort to shut the anti-colonial movement down, as it will later be the case in Algeria in the late 1950s with the construction of massive housing complexes by the French authorities as the second counter-revolutionary wave (after and simultaneously with the legal and military one) against the anti-colonial Revolution. Of course, the project itself is not in response to the 1952 strike but, rather, it constitutes a preemptive response to such a political struggle. Affirming this is not a proposal to reread history through the prism of a colonial conspiracy involving architects and urban planners at every level of military and administrative decisions. I have not personally read of any account involving Ecochard and the military regarding the counter-revolutionary characteristics of his urban design and do not know if any exist — nor did I for Fernand Pouillon in Algiers a few years later. However, the degree of intentionality manifested by architects when it comes to participating to the colonial order is secondary when the clients consist precisely in the guardians of such an order, and that architects consist in members of the settler society. Furthermore, through its extreme valuing of rationality, modern architecture, perhaps more than any others, embody the ideal spatial paradigm when it comes to population control (see this 2014 article about Brasilia for instance) and the framing of most aspects of the daily life of its residents. The various modernist housing complexes built by the French colonial authorities in Morocco and Algeria should therefore be seen at both political and operative levels for what they are: architectural counter-revolutionary weapons.

Architecture and the Anti-Colonial Revolution ///

As expressed countless times on The Funambulist, I am convinced that architecture has a propensity to embody the colonial order. Its intrinsic violence easily materializes the walls that the colonial state necessitate to sustain itself, and nothing is easier than to extrude a line traced a map where borders are colonial constructions. A part of me still believes that an anti-colonial design can be achieved if somehow one accepts to embrace such an intrinsic violence in favor of an anti-colonial agenda. Nevertheless, the relationship between architecture and the anti-colonial revolution is never greater than when the order embodied by the former is subverted (voluntarily or not) in favor of the latter. Although the liberation of Morocco occurred in 1956 and that it is doubtful that such a process had been already achieved by then in the Ecochard grid in the Carrières Centrales, the visit of the modern architecture of current Hay Mohammadi certainly suggests such a subversion in the difficulty we might even experience trying to recognize it. Of course, the subversion here was mostly based on the appropriation of a domestic space for daily needs, not on the political anti-colonial effort; yet, just like settler architects do not need to voluntarily contribute to the colonial order to actually do so, colonized and post-colonial residents (Hay Mohammadi remains a proletarian neighborhood today) do not need to voluntarily subvert this order to actually do so. If we may conclude with an ultimate comparison with Algiers, the Casbah did not need to be politically transformed to constitute an ideal spatial condition for the Algerian Revolution, its continuous existence in discrepancy with colonial logic, as well as its embodiment of a multitude of rational processes (in opposition to a uniform one, always manifested in a master plan), made it this way. May the following photographs in comparison to the previous one of the Ecochard grid therefore represent less the effectiveness of a past anti-colonial struggle, than the symbol of its potentiality in the present or the future in the subversion to the colonial order they incarnate.

Acknowledgments: this article could only be written today because of an invitation in Hay Mohammadi by friends Karima El Kharraze and Hélène Harder in 2016, and the generous introduction to the proletarian history of the city by Karim Rouissi. I also take advantage of this extra paragraph to say that I have, of course, read several texts on the matter by Marion Von Osten, and I am therefore necessarily influenced one way or another by her work in this article; yet, I remain unable to articulate an answer to it as her discourse seems to be formulated more for the purpose of architecture history than for the history of colonialism and anti-colonial movements approached through the perspective of architecture as I’m interested to do.

All following photographs in Hay Mohammadi, Casablanca by Léopold Lambert (2016) /// 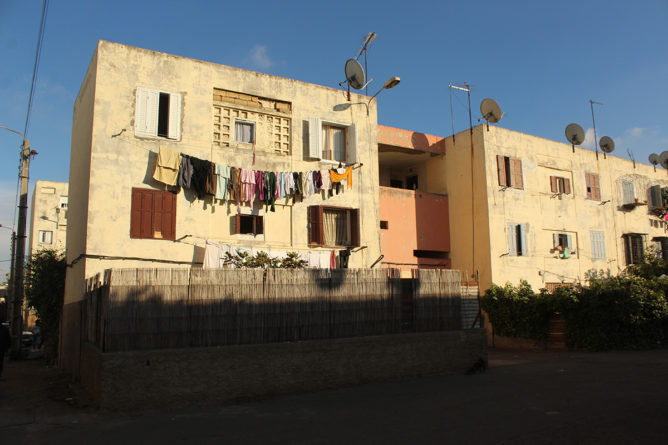 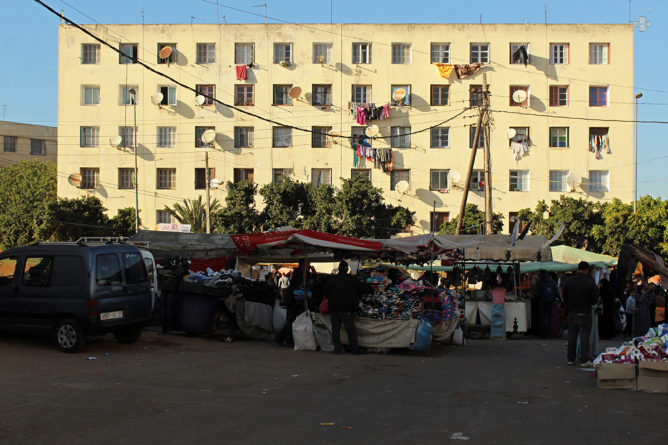 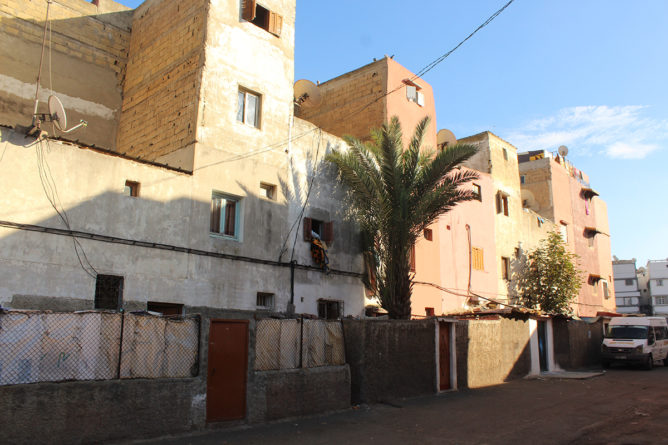