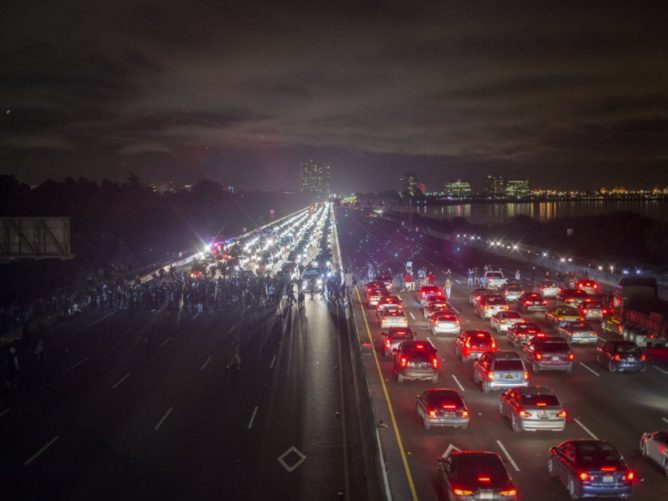 The Black Lives Matter movement shutting down a highway (November 2014)

This article is the third and last ‘episode’ around The Invisible Committee‘s new book, To Our Friends (Semiotext(e) & La Fabrique, 2014). The first episode was dedicated to the production of insurrectionist and counter-insurrectionist narratives through the protesting bodies, the second consisted in a critique of what we did wrong with Occupy Wall Street in the Fall 2011; this third one will take for object the infrastructure as the modern paradigm of the exercise of power. The fourth chapter of To Our Friends is named “Power Is Logistic: Let’s Shut Down Everything!” after a graffiti spotted in Turin (2012). This chapter starts with the remark that when the social movements of these last three years entered parliaments in Lybia, Ukraine or Wisconsin, they found these sites empty of the power they were supposed to contain — the way The Invisible Committee uses the term of power as an attribute and not an exercise is admittedly problematic. It then indicates the Euro banknotes as illustrative of where this power had shifted (my translation):

What is on the Euro banknotes? No human figure, no emblem of a personal sovereignty, but bridges, aqueducts, arches — impersonal architectures with an empty core. Each European has a printed manifestation of the true current nature of power in his/her pocket. It can be expressed as such: power lives in the world’s infrastructure. The contemporary power is of architectural and impersonal nature. (The Invisible Committee, A nos amis, Paris: La Fabrique, 2014, 82-83.)

A bit further, TIC quotes French Marshall Hubert Lyautey (1854-1934) according to whom “a construction project is worth a battalion” in the context of the colonial management — himself having been involved in Algeria, Vietnam, Madagascar, and Morocco. To Our Friends does not intend to establish a genealogy of the argument of an infrastructural power, but this is something we can attempt to introduce here: the colonial era seems to embody adequately a first phase of this militarized strategy. Infrastructure in colonies simultaneously allowed to profoundly settle the colonizing population/army, and provided a simulacrum of legitimacy for colonial enterprise through the ‘progressive modernization’ of the concerned country. We could distinguish a second phase in the United States during the Cold War, which saw a modification in depth of the national territory to serve simultaneously military and capitalist interests — not that they could possibly be separated anyway. As I tried to synthesize in the article “From the Highway to the Pill: Counter-History of the American Suburbia” (April 2014), the spreading of the American population and industry on the national territory was as much an attempt to exponentially develop the car industry as a prevision of a Russian (nuclear or not) offensive: the latter was thought to be weaken by a decentralization of the country’s resources, while the highway system had been thought in accordance to military equipment and vehicles that could thus see its movement optimized (this photograph of NATO operation in West Germany is highly evocative of such a strategy). A third phase of evolution of this argument of “power through infrastructure” can be found in the rampant privatization of the latter. No later than this morning, I read a well documented article on Mediapart (in French) about how the French State has lost most of its control over the management of the country’s highway system — admittedly pristine but prohibitive to an entire part of the population by its fare — after the Chirac/Villepin administration sold it to private construction companies (Eiffage, Vinci, Abertis) in 2006.

I wrote many times about the notion of occupying as embodying the paradigm of our social movement strategies; however, perhaps this strategy is doomed to failed (at least, if we follow TIC’s argument) if this occupation does not simultaneously sabotage the fluxes of circulation of goods, humans, and capital — this was the case in Cairo where Tahrir Square, a central infrastructural hub, had been chosen for the place of occupation that lead to the 2011 revolution. The term of sabotage comes historically from the workers’ action to place a wooden clog (sabot in French) in factories’ machines in order to stop them from working. This is certainly for what TIC is arguing and, despite its anonymity, it is not innocent that it is suspected to be the “Groupe de Tarnac” that sabotaged some of the TGV’s (high speed train) catenaries in 2008. Similarly, the recent actions of the Black Lives Matter movement in the United States to act against the structural anti-black racism of the police and judiciary system, shutting down highways in Atlanta and Oakland (and more recently the fortified Oakland police headquarters) find a degree of efficiency that we never reached with Occupy Wall Street, to the significant exception of the operation by the Oakland Commune that shut down the port in November 2011.

Remaining with the Black Lives Matter movement, we can also mention the numerous “die-in” accomplished across the United States this last month. When the 1960s “sit-in” of the civil rights movement undertook to occupy (here again) places where black bodies were not authorized, “die-in,” in addition to their strong evocative visual aspect that suggests horrifying mass graves, have a clogging vocation by maximizing the surface a body occupies on the ground. Infrastructure is thus sabotaged by the only presence of bodies interrupting the flux that capitalism wants to see continuous. In a similar manner, we can wonder what would have been the effects of Occupy Wall Street if we did not try to occupy Wall Street as a symbolic site — although symbolism necessarily carries a visibility — but Wall Street as an infrastructure, that is, a warehouse near the New Jersey turnpike — where human highways meet capital highways — where the stock exchange servers and their militarized algorithms operate (see past article about the book 6: The Rise of the Machines describing these algorithms). In a system that capitalizes time and counts on the continuous circulation of humans, goods and capital, any interruption of capitalism’s vital flux has significant consequences on it. We can interpret the fact that Wall Street’s algorithms are trying to earn micro-seconds to maximize their sales’ profits in the least amount of time: we can either experience the vertigo of how much capitalism operates at a scale of time whose units are in now way perceivable by humans, or we can experience a similar vertigo, this time attempting to fathom how much damage can be inflicted to this system when interrupting this flux, even for a few seconds. Capitalism and its infrastructural exercise of power might very well be defeated in its own game, when time plays in our favor.