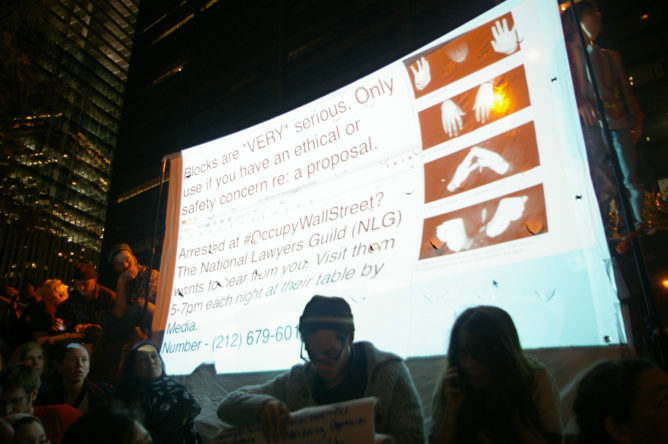 This second episode dedicated to The Invisible Committee‘s book, To Our Friends (Semiotext(e) & La Fabrique, 2014) will consist in a (too short) analyse of what we did wrong with Occupy Wall Street during the two months of occupation of Zuccotti Park in New York (September-November 2011). This is something we started to do a few months ago with Pamela Brown during our conversation for Archipelago (March 2014), examining how the discursive and behavioral mechanisms of racial domination never really dissipated within Occupy’s working groups. This examination is taken further by the analysis of the movement by the Invisible Committee, who simply affirms that things started to go wrong when occupy tried “to govern.”

The third chapter of To Our Friends finds its title (like every others) in a graffiti found across the world. This specific one, found in Mexico, writes “They want to force us to govern, we won’t yield to this provocation,” and defines as such the topic of the chapter. For the Invisible Committee, the paradigm of Occupy’s mistake can be seen in the attribution of a $29,000 budget to allow twenty of its members to fly to Egypt in order to help supervising the regularity of the Egyptian elections. Electing a parliament was however not the aspiration of Tahrir revolutionaries and the idea that it might have been, is a symptom of Western belief for representative democracy. The Invisible Committee goes further however, this is not a question antagonizing representative democracy against direct democracy like we attempted to practice it on Zuccotti Park; it antagonizes democracy as system altogether. Describing the various decisional general assemblies organized on a daily basis by movements like the Spanish Indignados or Occupy, the Invisible Committee writes the following unequivocal paragraph (my translation):

The assembly is the place where we are forced to hear bullshit without being able to reply, exactly like on TV, in addition of being the place of an exhausting dramatizing, even more lying on what it is, since it mimes sincerity, affliction or enthusiasm. The extreme bureaucratization of commissions won over the most enduring members, and it took two weeks to a commission to finally deliver an insufferable and calamitous two-page document that was summerizing — it thought — “in what we believe.” (The Invisible Committee, A nos amis, Paris: La Fabrique, 2014, 59.)

The assembly can embody the space of discussion (“the only thing that an assembly can produce, if it tries, is a common language”), but it is ought to fail if it attempts to decide. Further in the same paragraph, the Invisible Committee cites Oakland (and its Commune) and Chapel Hill (North Carolina) as instances of the movement that succeeded in avoiding this pitfall (my translation):

In Oakland, just like in Chapel Hill, we came to consider that the assembly had no legitimacy to validate what one group or another could and wanted to do, but that it was instead a place for exchange and not decision. When an idea that came up during the assembly was solidifying, it was simply because enough people found it good enough to actually take the means to implement it, and not because it was approved by a majority. Decisions were solidifying or not, they were never taken. One day in June 2011 on Syntagma Square [in Athens], some actions in the subway were voted in General Assembly by several thousands of individuals. When the day of the actions came, there were no more than twenty people who showed up to actually act on it. This is how the “decision-taking” problem, which obsesses all the freaked out democrats of the world, revealed itself as a false problem. (The Invisible Committee, A nos amis, Paris: La Fabrique, 2014, 60.)

To Our Friends does not differentiate the word democracy from the one of government. The working groups of the 2011 movements are therefore particularly problematic in the way they reproduce the various governmental commissions forming an elitist technocracy. I certainly knows something about it, having been part of a working group about education at OWS, only to realize that the unanimity-minus-one of my colleagues were all teachers. However, my take about this topic is, I think, less absolute than the one argued in the book: these working groups would have avoided many political pitfalls in the way they operated, if they had systematically gathered in the public. As written back then (article from Oct. 25, 2011), meeting in semi-private places were not only contrary to the political agenda it was supposed to serve, but the symbolic power of space was insuring to reaffirm all the social mechanism of power evoked in the beginning of this article.

The mistake of Occupy Wall Street was therefore the opposite of the blames addressed from outside the movement. We managed not to fall in the trap of the demand that would have legitimatized simultaneously the institution receiving the demand (the US Government of any other), we understood that occupy’s political power was its mere existence, incarnated by our bodies gathered in the public (article from Oct. 10, 2011); however, the idea that we needed to govern ourselves did not dissipate from our minds, thus reproducing the well-known mechanisms on which are based the very thing against which we were struggling.