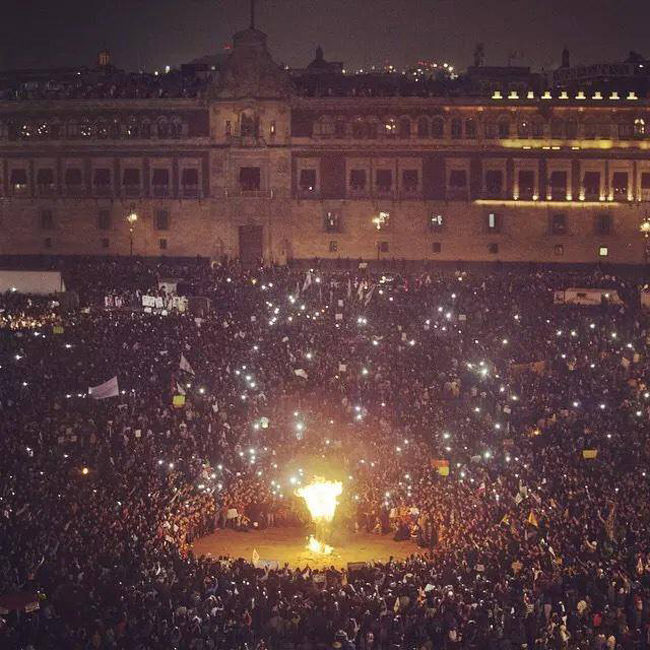 As announced in the previous article, I will dedicate three ‘episodes’ to the new book written by The Invisible Committee, To Our Friends.  The book is forthcoming in its English version at Semiotext(e) — its is already published by La Fabrique in French, its original version — and the idea of writing a few chapters about it before it does, like Derek Gregory did with his twelve articles about Grégoire Chamayou’s Theory of the Drone (also published by La Fabrique in its original version), seems potentially useful. In 2007, the Invisible Committee had published The Coming Insurrection (Semiotext(e), La Fabrique), which was ‘prophetizing’ the numerous revolts and revolutions that the world has, and continue to, experience since then. Making a critique of the book is not what I want to do here, but I however have to note the ‘freshness’ of the sharp critique the Invisible Committee makes of our world. Throughout it, “radicals” (for their competitive and moralistic sense of “who is the most radical”) and “pacifists” (for their acceptance of their defeat before even starting the struggle) are being as critiqued as the designers of the counter-insurrection, who, at least, embrace the means of their domination. The very informed critique of the way a movement like Occupy has evolved is extremely useful to me, for instance, and I will dedicate the second episode to this problem.

Today, I would like to link two distant paragraphs in the book for the symmetry they imply. Both consider the bodies gathered in the street and examine the two opposite forces (insurrectionist and counter-insurrectionist) that attempts to produce these bodies within their respective narrative. While the external narrative attempt to make these bodies appear as an antagonist to society — the notion of society as we understand it, is critiqued at length throughout the book — the immanent one attempts to produce an insurrectionist movement.

When the blindest suppression strike us, let’s keep ourselves from seeing in it the proof of our own radicality. Let’s not think that they are trying to destroy us. Let’s rather start from the hypothesis that they might be trying to produce us. To be produced as political subjects, as “anarchists,” as “Black Bloc,” as “anti-system,” to extract us from the generic population in order to file for us a political identity. (The Invisible Committee, A nos amis, Paris: La Fabrique, 2014, 165.)

The insertion of provocative and dissimulated police officers within the demonstrations is a well-known practice; however, the counter-insurrectionist production does not stop here, far from it. Its goal is to provide an easily-recognizable imagery, which allows the categorization (the denomination) of demonstrators, and therefore their marginalization. Every participant to a demonstration knows that the movement in which (s)he is taking a part will always be described by the press through the pictures of physical violence against the police, banks, or stores. Violence does not constitute the ethical question here, it only does when it is exercised from a position of power — which is almost never the case against the police — the problem is rather that the direct antagonism against the suppressive forces constitutes a role within the latter’s ‘game.’

If we then say that “the people” is in the streets, it is not a people that formerly existed. It is, on the contrary, the one that was formerly missing.  It is not “the people” that produces the insurrection, it is the insurrection that produces its people by sparking off common experience and intelligence, the human fabric, and the real life language that had disappeared. (The Invisible Committee, A nos amis, Paris: La Fabrique, 2014, 43.)

Here lies the insurrectionist production that goes against the common notion that “the people” always exists, and episodically revolt against its sovereign. Here, we can recommend the reading of one more volume published by La Fabrique, What Is a People (see past article), where Judith Butler, Alain Badiou, and Pierre Bourdieu give their interpretation of this notion. “The people” is the product of a constructive process enacted by its common goal and the means chosen to achieve it. It is the common choice to situate our bodies in the public (see past article about Occupy Gezi), and the construction of a different social relation that construct it. This last notion is fundamental since the mechanisms of domination can easily re-appear in the social relation, especially when exercising a mode of governmentality (whatever it might be), as we will see in the next episode.