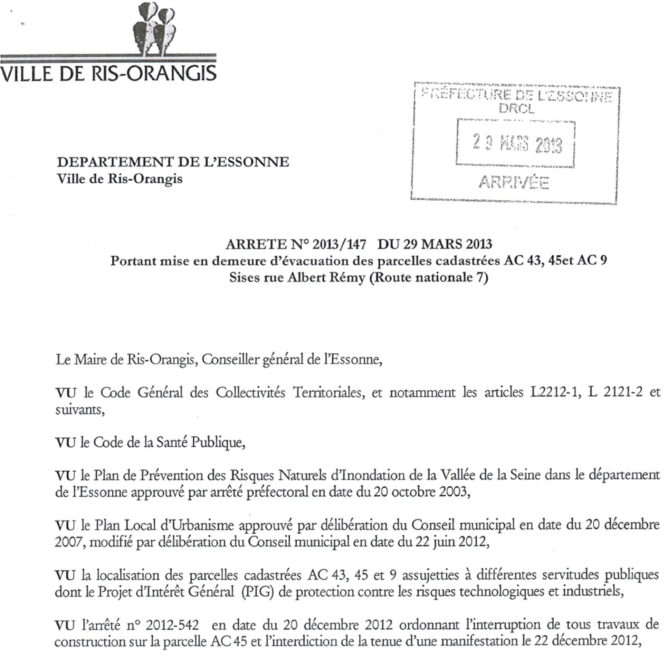 On March 29, 2013, Stéphane Raffalli, the mayor of Ris-Orangis, a 25,000-inhabitant town of the South suburbs of Paris, issued a municipal order to evict and destroy a shantytown where more than 200 Romanian migrants (including Romas and non-Romas) lived. This municipal order certainly strikes by its stylistic prose, whose study gave birth to a collectively-written book entitled Considérant qu’il est plausible que de tels événements puissent à nouveaux survenir: Sur l’art municipal de détruire un bidonville (Considering that It Is Plausible that Such Events Could Occur Again: On the Municipal Art to Destroy a Shantytown, Post-Editions, 2014). The municipal order uses the dry administrative language, yet articulates it around an anaphora of the terms VU (observing, used 21 times) and CONSIDERANT (considering, used 75 times) at the beginning of each paragraph (see the entire order at the end of this article), thus mixing poetry and administrative jargon in an unprecedented and disturbing manner. Of course, the order’s arguments consist in enumerating the dangers from which this population should be saved but racism against the Roma population (and other people who could be interpreted as being part of it) is now wearing the bare minimum of disguise in France. The fact that this order has been written against this population renders its literary style closer to a prosecutor’s diatribe than a benevolent discourse from a mayor supposed to consider — the word is far from innocent — the life of bodies who live on municipal land.

The book quoted above was made at the initiative of the non-profit organization Le PEROU whose president is landscape designer Gilles Clément and its director, political-scientist Sébastien Thiéry, who had organized the construction of “the embassy” inside the shantytown, in order to provide a space for celebrations between the local population and outsiders (such as the schoolmates of the kids inhabiting the village). Other contributors to the book analyzing, unfolding, reacting, organizing against this dreadful text, include architects Patrick Bouchain and Loic Julienne (see past article), philosopher Etienne Balibar, photographer Aude Tincelin, architect Chloé Bodard, and many more. Many of them wrote a text re-using the same anaphora of the VU and CONSIDERANT in order to subvert its content against its author. Others analyzes the legal flaws of such an order: the contradictory fact that the evicted population has three months to appeal but their houses have been destroyed less than a week after the order was issued. Others analyzes the racism experienced in France nowadays, even in municipalities that claim themselves as being socialists — we ought to note that the city of Evry whose mayor was controversial current Prime Minister Manuel Valls between 2001 and 2012 is the direct neighbor of Ris-Orangis. Others don’t write but draw or show photographs of the village.

This book is however not merely against an eviction and the destruction of homes. It is not a blissful celebration of a shantytown from people who live in better conditions. On the contrary, it is the demonstration of municipal and national demagogic strategies that consists in the relentless administrative and policed action against the Roma population. The existence of shantytowns does not reveal a different way of life like most politicians try to make us believe, but more simply the absolute absence of help from any local or national entity. Passive violence (no help), as well as proactive violence (evictions, destruction, deportation) are both part of the same strategy allowed by a racist imaginary that recalls some aspects of the 1930s — let us not forget that more than a million of Romas were subsequently industrially murdered by the Nazis during the Holocaust (the Porajmos).

Like every shantytown, this village challenges the way we perceive land property — particularly manifested through the administrative denomination of the order: “parcels AC 43, 45 and 9” — as Edith Hallauer and Patrick Bouchain analyze in their text. They quote Lucretius when he writes “life is given as property to no one, in usage to all” (De rerum natura, 55 B.C.). We systematically essentialize property when, instead, we could favor the use of land at a given moments through an ethics of the commons. Property could simply mean the extent of a temporary territory on which the occupying body is the center and half of the distance to the next body, the radius. The way the national and municipal governing entities considers, or rather, refuse to consider, the Roma population on the land they administrate, on the contrary, reinforces the absolute separation of an “us” and a “them.” Such an essential separation legitimize the violence developed on “them,” as long it is constructed through an imaginary. Racism and its violence are not reminiscence of a society, they are produced relentlessly by it, knowing that one recognized failure in their rationale would jeopardize their existence and exercise.

COPY OF THE MUNICIPAL ORDER: