Léopold Lambert – Paris on September 16, 2016
If you enjoy articles of the blog, have a look at The Funambulist Magazine!

As I am currently working on the next issue of The Funambulist Magazine dedicated to the Police, I encountered this very interesting news from Seattle. Yesterday (September 15, 2016) evening, “Seattle Mayor Ed Murray and three City Council members said they’re abandoning plans to push through up to $149 million in funding for a brand new police station in North Seattle during this fall’s budget negotiations” (source: The Stranger). This decision follows the political work engaged by Black Lives Matter in general, and the inspiring campaign #BlockTheBunker started by the Seattle Black Book Club a few months ago in particular. The four points on this campaign’s agenda are remarkably clear and engaged in radical transformatory politics: 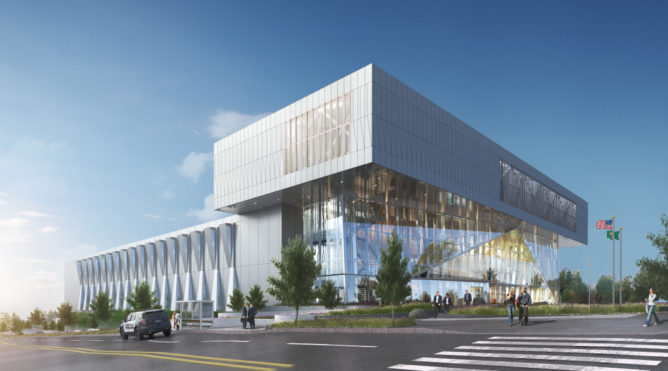 Although the term is not used by the campaign, the way it challenges the construction of “the bunker” is consistent with the vision of police abolitionists. This is particularly true when it comes to the transfer of the allocation of resources to the police towards local communities instead, in particular those that are usually at the end of the line for such allocation (neighborhoods primarily inhabited by the working class and communities of color), and which are also the privileged target of police violence.

It is not innocent that this campaign is fundamentally oriented against architecture: not only does the architecture of police stations crystallizes the degree of antagonism that the police carries for its surrounding communities, not only does it represent a deliberate and important expense for the city, not only it embodies an aesthetic of the police state as it thinks of itself, architecture, in the way it organizes bodies in space, is also in itself a form of policing as argued (somehow obsessively!) throughout this blog (see past article). The name of the campaign itself, #BlockTheBunker, is explicit about this opposition to architecture and its weaponization that the militarized environments constituted by police stations in the city. 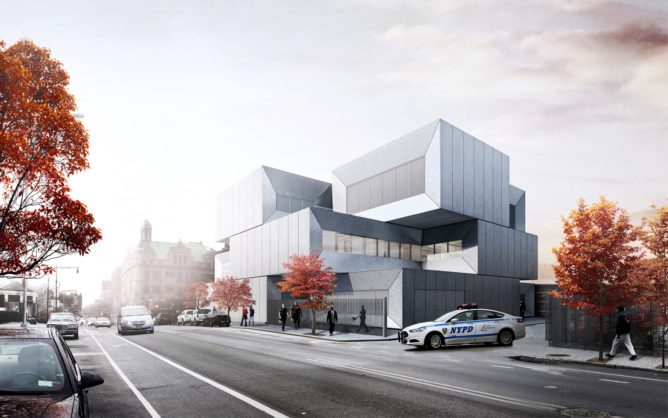 The success of the campaign #BlockTheBunker in Seattle should inspire many others in the United States and elsewhere. For instance, in February 2016, the New York City Department of Design and Construction officially commissioned the design of the future 40th Precinct Police Station to BIG, one of the current most successful architectural firms in the world, mostly known for their didactic (if not patronizing) way to explain their projects to clients and the public, as well as for the ‘hip’ pictorial characteristics of their buildings. Given the consistent lack of concern from this architecture office for any political issues (which is itself a political positioning), we cannot even accuse them to be disingenuous when they write “the 40th Precinct will also house a brand new piece of city program: the first ever community meeting room in a precinct. With its own street-level entrance, the multipurpose space will contain information kiosks and areas to hold classes or events, encouraging civic engagement with the precinct” (source: Archdaily).

I don’t think that this is disingenuous from my end to associate the existing Harlem 28th Precinct building with the one proposed by BIG a few miles North in the Bronx. Of course renderings tend to polish the aesthetic of a yet-to-be-built architecture, but this new building will have a lot of difficulties hiding the bunker characteristics of its architectural typology. I don’t think that this is disingenuous either to assume that a “a community meeting room” in a building like this one will not experience a strong affluence, regardless of the “civic engagement” of the neighboring communities — especially when such a civic engagement might consist in the protection of locals against the police. There could therefore be another #BlockTheBunker campaign against this building, favoring the resources engaged for a community building, rather than for a meeting room in a police bunker. BIG could even consult for it if they want (!) although cautiously as ‘hip’ has some drastic consequences in a city like New York, where gentrification is always looking for a new place to deploy itself.

In October 2015, exactly ten years after Bouna Traoré and Zyed Benna, two Black and Arab teenagers from Paris eastern suburbs died after being chased illegitimately by the police, which triggered the month of massive revolts of the banlieues youth, I posted a photographic research dedicated to the weaponized architecture of nine police stations in the northeastern Paris banlieues, six of which have been built after the 2005 revolts.  The particularity of these police stations is that they are clearly the output of a dedicated work by architectural offices, some of which even advertise their police project as part of their portfolio alongside libraries, collective housing, and offices. The antagonism that the police has for the banlieue racialized communities is fully expressed by these architectures that have their place in the history of military buildings. Architects are to be hold responsible for their contribution to such an antagonism — they may have not trigger it, but they definitely maintained, if not reinforced it. 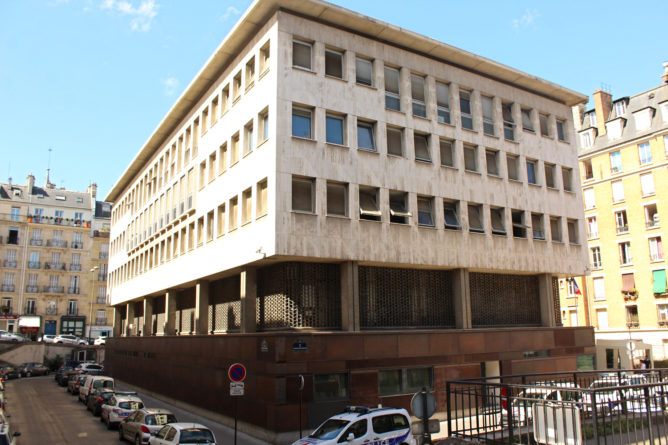 Building police bunkers after territorialized revolts is not new in France. The highly fortified and opaque base of the 5th arrondissement police station (see photo below), at the edge of the Quartier Latin (the inner Paris student district) is also a testimony of such a strategy. It was built a few years after the 1968 student and worker revolts and its fortified characteristics are now proving handy in the context of the ongoing state of emergency in France with the filtering of anyone entering the building by a preliminary outdoor checkpoint (on the right in the photo). In April 2016, the police station has been the target of one early non-authorized march by the movement Nuit Debout after that some of its members had been arrested and placed in temporary detention inside the building.

Architects have to face once again the fact that when it comes to the enforcement of unequal violence in our societies, they are more likely part of the problem than of the “solution.” Although I have argued at length that no architecture could be said to be non-weaponized, police stations are some of the most antagonizing buildings in societies where the police’s very function — the “law enforcement” — consists in making sure that the structural racism inscribed in explicit (the law) and implicit (the norm) social rules is operative. For this reason, architects should be at the forefront of campaign such as #BlockTheBunker and dedicate themselves to think architecture against itself.