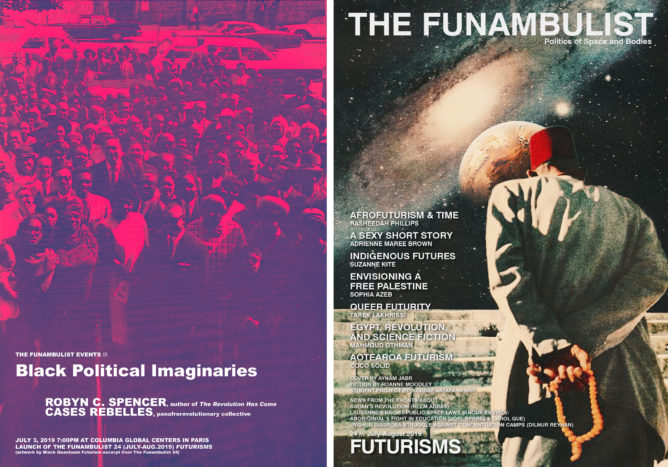 After a short presentation of The Funambulist’s 24th issue by founding editor Léopold Lambert, Robyn C. Spencer will present how and why the Black Panther Party grappled with the imperatives of global solidarity and anti-imperialist activism. From International solidarity groups based in Europe, to an International section in Algeria, to criticism of the US war in Vietnam, the Panthers mobilized blackness as a potent force for anti-racist and anti-capitalist action. They expanded the boundaries of the US based Black political imaginary and became part of channels and circuits of political engagement that are imperative to consider at this time of the rise of the global right. Cases Rebelles members will then talk about how their transnational stance to their belief in the pivotal oppositional power of the margins, from their ethos of resourcefulness to the influence that popular Caribbean cultures had on them, they will reflect on what fueled their actions, their aspirations for change, for political transformation, and discuss how they envision revolutionary Black futurity.

Robyn Spencer is a historian who focuses on Black social protest after World War II, urban and working-class radicalism, and gender. In 2018-2019 she is Women’s and Gender Studies Visiting Endowed Chair at Brooklyn College, CUNY. Her book The Revolution Has Come: Black Power, Gender, and the Black Panther Party in Oakland was published in 2016 and she is working on a 2nd book project titled To Build the World Anew: Black Liberation Politics and the Movement Against the Vietnam War.

Collectif Cases Rebelles is a France-based, anti-authoritarian, panafrorevolutionary, Black political collective fighting against all forms of oppression. On their website, they publish a monthly podcast, political essays, interviews, reviews and articles on Black cultures and struggles across the world. They also do grassroots work, participate in protests, organize workshops and film screenings as well as give talks. In 2017, they wrote “100 portraits contre l’état policier” (100 portraits against the Police State), and in 2018, they released Dire à Lamine, a documentary film about Lamine Dieng, a 25-year-old Black man who was killed by policemen on June 17, 2007. They also edited and translated the first French edition of Assata: An Autobiography by Assata Shakur (Éditions Pmn).