In the last week, I was lucky enough to present The Funambulist Magazine in Tokyo (October 7 at Vacant) and Hong Kong (October 13 at Kubrick) along with friends Christina Yi and Momoyo Homma on the one hand, and Tings Chak and Sonia Wong on the other (see the two posters at the end of this post). The following recordings were made during these two events but, due to a (classic) mistake of my own, the recordings do not include my own presentation in Tokyo (listen to the HK one instead), nor the first ten minutes of Christina’s presentation; I apologize to her and to you for such a silly mistake.

Christina Yi on her contribution to The Funambulist Magazine 07 (Sept-Oct. 2016) Health Struggles: “What’s In the Status? On Resident Koreans in Japan“

Christina Yi is Assistant Professor of Modern Japanese Literature at the University of British Columbia. She received her Ph.D. in Modern Japanese Literature from Columbia University. Her research focuses on the rise of Japanese-language literature by Korean colonial subjects during the 1930s and 1940s and its subsequent impact on discourse regarding “national” and “ethnic minority” literature in postwar Japan and Korea. She is currently serving as a Japan Society for the Promotion of Science Research Fellow at Waseda University, where she is working on a book manuscript that investigates how linguistic nationalism and national identity intersect in the formation of modern literary canons in East Asia.

Momoyo Homma on her interview in The Funambulist Magazine 07 (Sept-Oct. 2016) Health Struggles: “‘We Have Decided Not to Die’: The Work of Arakawa and Madeline Gins“

Momoyo Homma is the Director of the Architectural Body Research Foundation (Arakawa + Gins Tokyo office). She studied and graduated from Musashino Art University before moving to Costa Rica in 1993 where she worked as a full-time professor at Casa del Artista (San Jose, Costa Rica). She then worked as an assistant program director, project “Al MARGEN” by ILPES (at that time), San Jose, Costa Rica. After coming back to Japan in 1998, she worked at Caribbean Friendship Association, Promo-Arte Latin American gallery (both Tokyo, Japan). In 2000, she firstly met ARAKAWA, and established ABRF, Inc. in 2002, where she is currently serving as the present post.

Special thanks to Yoshi Tsujimura for organizing, the Vacant Team for hosting.

Presentation of the form and contents of The Funambulist Magazine by Léopold Lambert.

Tings Chak on her contribution (with Sarah Turnbull) to The Funambulist Magazine 04 (Mar-Apr. 2016) Carceral Environments: “Migrant Detention: Stories from the U.K.”

Tings Chak is a migrant justice organizer and artist trained in architectural design, whose work draws inspiration from anti-colonial, prison abolition, and spatial justice struggles. She is the author of Undocumented: The Architecture of Migrant Detention, a graphic novel that grew out of the collective organizing work of End Immigration Detention Network and No One is Illegal – Toronto.

Sonia Wong is a PhD student at the Department of Cultural Studies, Lingnan University. Her areas of interest include lesbianism, pornography, identity formation, and sexual subjectivity. She founded Reel Women Hong Kong in 2013, aiming at promoting female-created films and art works, as well as equality and gender awareness in society. Apart from organizing Reel Women Hong Kong Film Festival, her creative endeavors include poetry, short fiction, and visual arts. She has recently published her first bi-lingual poetry collection Unseemingly Lasting with the support of Renaissance Foundation Hong Kong.

Special thanks to Ming Ho for organizing and the rest of the Kubrick team for hosting. 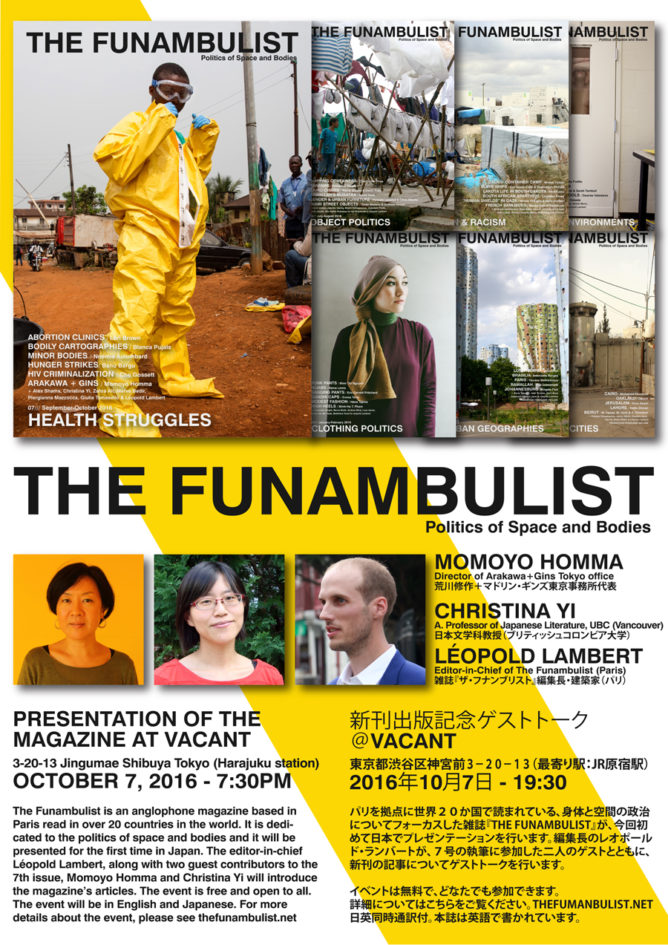 Interview of Momoyo Homma in The Funambulist Magazine 07 (Sept-Oct. 2016) Health Struggles: “‘We Have Decided Not to Die’: The Work of Arakawa and Madeline Gins“