Léopold Lambert – Paris on June 16, 2016
If you enjoy articles of the blog, have a look at The Funambulist Magazine!

Mobile police fence, allowing only a controlled pedestrian access to the Rue de Rennes on June 14, 2016 / Photo by Léopold Lambert

To the risk of spending too much time on political matters specific to France for a certain amount of the blog’s readers, I would like to come back to a very recent event that occurred a few hundreds meters away from my office, and that I was therefore able to document and investigate in a way that is not dissimilar to the (much more rigorous) methods of Forensic Architecture. On Tuesday June 14, a massive demonstration took place in Paris and gathered several hundreds of thousand people protesting against the new labor legislation that intends to (de)regulate labor conditions in the workers’ disfavor. Exceptionally the demonstration was organized as a march from Place d’Italie (South-East of Paris) to Invalides (Center-West of Paris). A certain amount of clashes occurred along the way between the massively deployed police — we’re still under the state of emergency — and several dozens of masked participants who undertook to break down advertising windows, banks and insurance companies’ storefronts, as well as throw stones at the police — whether one thinks that such action is legitimate or not, one is obliged to observe the asymmetry of means, as well as the fact that these individuals represented less than one percent of the participants to the demonstration. As it is customary (cf. this widely shared/translated cartoon), the press and politicians strictly framed their coverage and discourses on the spectacle offered by cocktail molotov, fire bombs and other firecrackers (conveniently forgetting the ubiquity of teargas and deafening grenades), rather than on the human tide of dissent that flowed the Paris boulevards. 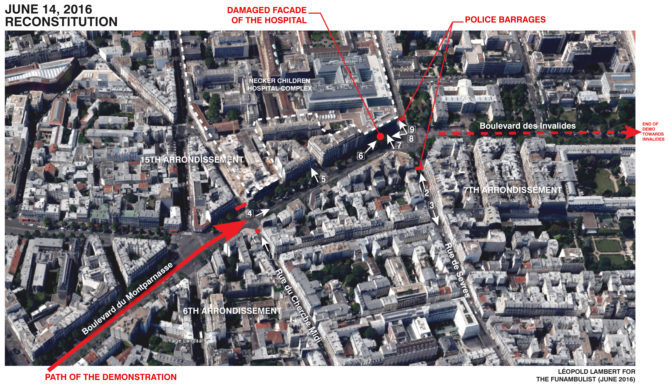 Map for a reconstitution. Numbers near the white arrows refer to the photographs presented below.

One particular event however became the focus of this narrative constructed to compromize the social movement protesting the labor law. At some point of the day, during a moment of generalized confusion, one to three people deliberately damaged a few glass panels of the exterior facades of a relatively recent building of the Necker Hospital, a large hospital complex dedicated to the care of children. The description made by some press outlets, as well as by political representatives, depicted scenes of terror for the children and the medical staff inside the hospital, as if hordes of hooligans had penetrated the complex of the hospital and undertook to break everything they found. The Ministry of Interior, Bernard Cazeneuve, even conveniently mentioned the presence in the hospital of the young child of a couple of police officers assassinated the night before by a alleged member of ISIS. The words of Prime Minister Manuel Valls in front of the hospital on Wednesday accusing demonstrators to want to “kill police officers” completed the vision associating workers unions and ISIS, offered a few days earlier by Le Point, one of the most followed weekly news journal that stated that “France is subjected to two threats today that, despite being different, are compromizing its integrity: ISIS and the CGT [main worker union].” 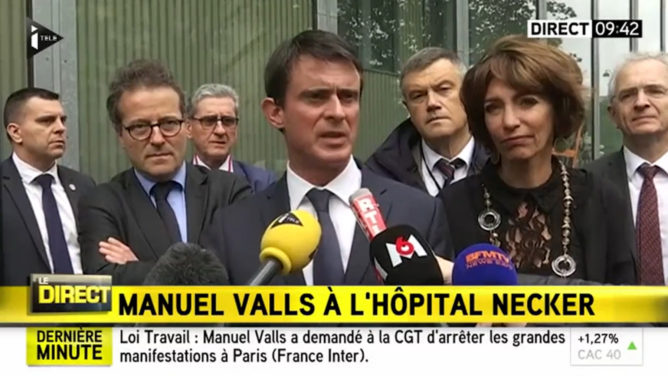 Although some people (staff and patients’ parents) inside the hospital during the demonstration already offered their version of the story and their aversion of the instrumentalization of this event by the government, and although we can probably all agree that the three individuals who smashed a mallet in the glass walls of the hospital acted in a manner that is difficult to define in another way than moronically — a live video showing one of them at work allows us to hear from another demonstrator “hey! it’s a kid hospital here!” — it seems important to reconstitute the context and actual effects of this particular event. All following photographs are some I took a few instants before these glass walls were damaged on June 14, and further, some other I took today to observe the (small) extents of the damages.

[1] For about 1.5 hour, the demonstration cortege was stopped on the Boulevard du Montparnasse at the level of the Rue du Cherche Midi, while police barrages prevented anyone to access it. 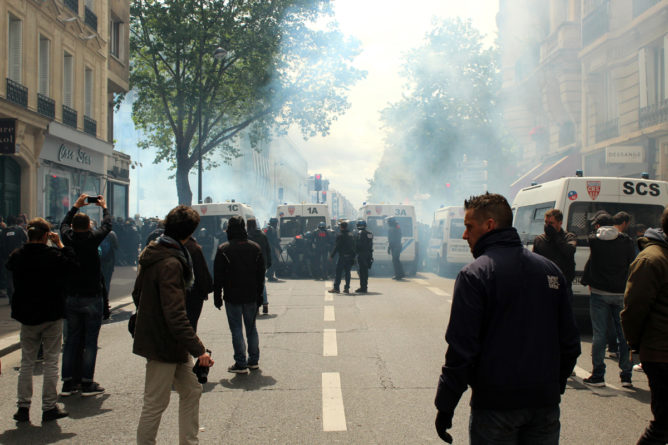 [2] Many people at the police barrage on Rue de Sevres wanting to either join the demonstration, or simply cross the Boulevard. The hospital can be seen in the background of the fourth picture. The third and fourth pictures show a demonstrator being frisk by police officers. The fifth picture show the smoke of teargas — although this is not visible, the air was already toxic the moment earlier — after fire bombs and stones were thrown at the police. 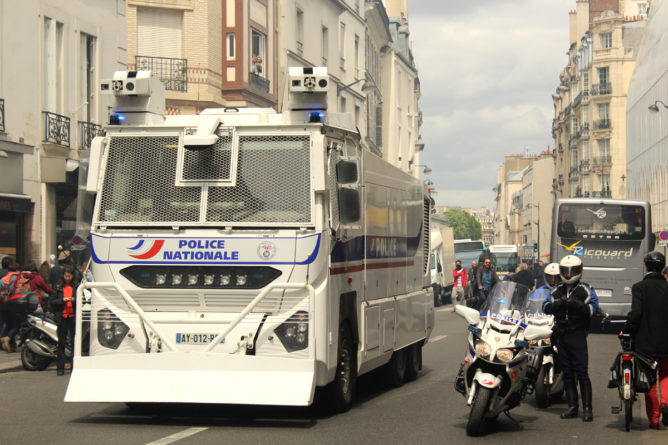 [3] The State of Emergency implies exceptional police arsenal. A few minutes later, the water canon vehicle was brought to the intersection and started to disperse demonstrators. 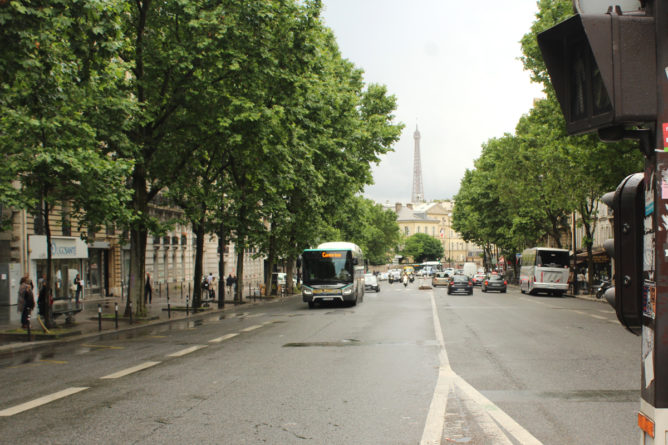 [4] View of the Boulevard du Montparnasse on June 16. The photograph is taken from where the demonstration cortege was stopped and show where the clashes occur. 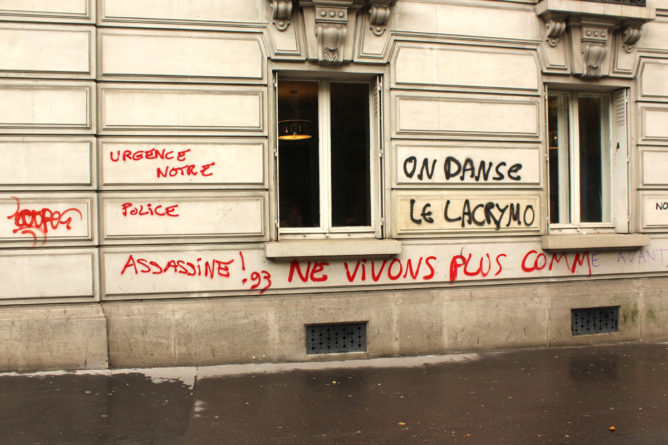 [5] Graffiti on the bourgeois residential buildings of the Boulevard. The one on the left “Urgence Notre Police Assassine! 93” (Emergency, Our Police Assassinate) attests of the presence of familiar banlieue organizations in the demonstration. 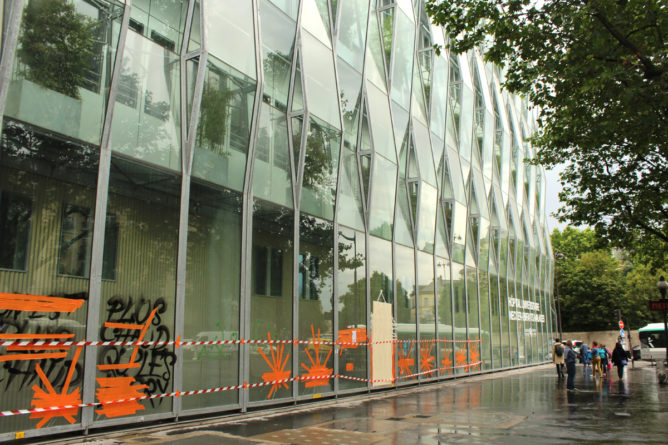 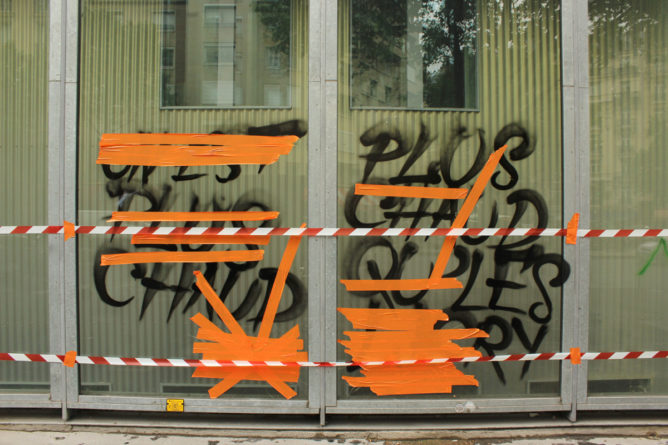 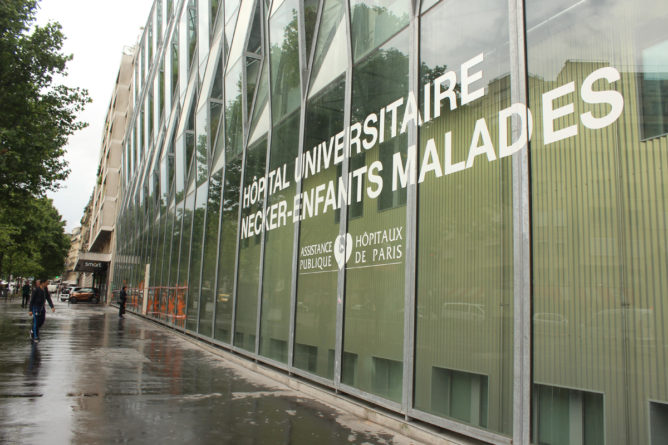 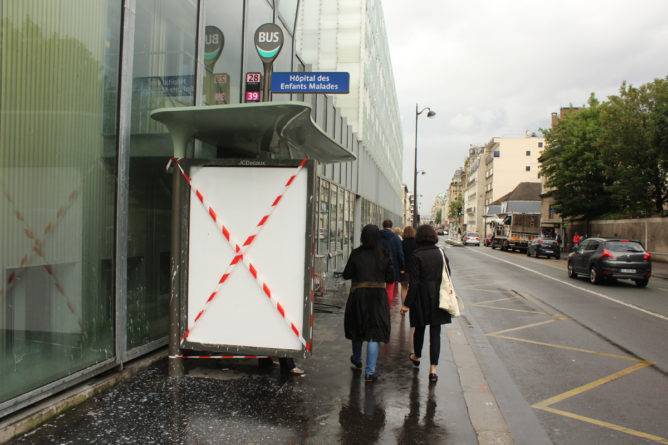 [6] [7] [8] [9] These photographs show the extents of the damages on the external skin of the hospital building. Although relatively small and non-consequential to the function of the interior spaces — PM Valls described “surgery rooms behind this walls!” — one is forced to recognize the absurdity of such damages that exclusively serve the construction of the government’s narrative, which clearly was expecting if not hoping something like this to happen. A few weeks ago, a police union revealed that officers currently receive orders no to act immediately against individuals breaking storefronts and bank dispensers, suspecting the Ministry of Interior to thus force an imaginary associating the current social movement to violence. Although this text is in no way trying to legitimize a police intervention — police-less demonstrations would necessarily be safer for everyone — this lack of intervention (although witnessed, to a certain extent on Tuesday) is highly revealing about the government’s strategy.

In conclusion, despite the specificity of this case in terms of geographical and historical context, we can see how it relates to many other situations, in which the inherent subjectivity of the medium (etymologically, the “intermediary”) that recounts an event is fully embraced and thus instrumentalized politically. In this case, the compromission, however small, of the architecture of the hospital becomes an act deliberately confusing the external membrane of a building with the totality of the bodies situated inside of it. Moreover, this attack on architecture is placed in a current imaginary of spectacular destruction that goes from Palmyra to the attacked cafés of the French capital (but unsurprisingly, not in Gaza). Although the act itself cannot be suspected to be engineered by the police itself (a few conspiracy theories already flourished since Tuesday), the conditions of this act, as well as the way it is recounted are the respective responsibilities of the government, and the press. I started this text by mentioning the work of Forensic Architecture as an example of investigations involving architects’ expertise through other means than the one traditionally associated to this profession. Although such expertise is not fundamentally mobilized in this present example, I am hoping that such an investigation, however small it might be, can be considered as a methodological precedent on which others could base themselves, some of which mobilizing more the architectural dimension of the given examined event.

Humor Bonus: Cartesian logic on the Boulevard du Montparnasse: “I think therefore I am not a (anti-riot) cop” 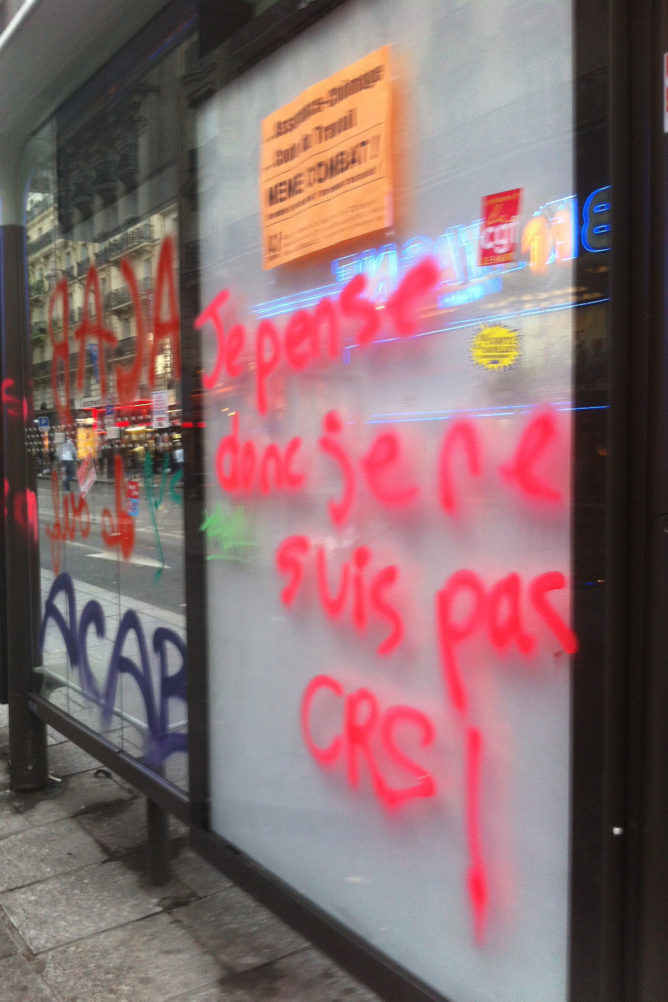