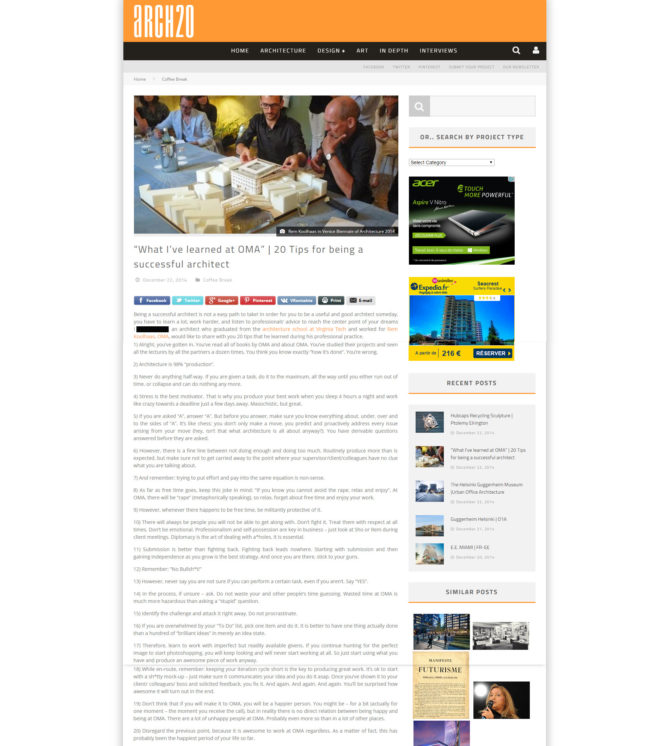 Yesterday, on December 22, 2014, the blog ARCH2O published an outrageous article written by a former employee of Rotterdam/NY-based architecture office OMA. In this article entitled “What I Learned at OMA | 20 Tips for Being a Successful Architect,” one can read, among many comments legitimatizing exploitative work conditions, an apology of rape in the form of what is introduced as a joke: “As far as free time goes, keep this joke in mind: ‘If you know you cannot avoid the rape, relax and enjoy.’ At OMA, there will be ‘rape’ (metaphorically speaking), so relax, forget about free time and enjoy your work.”

The article has now been pulled out from ARCH2O website but stayed online for about a day. I do not intend to reveal who wrote this article, because I think that the problem is less the identity of the person who wrote it than the fact that this has been written and published online by a large-audience platform and, even more importantly, that this person has evidently never been confronted to conditions – including during the blog’s re-reading of his article – where such a supposed ‘joke’ would have been seen and described for what it is: an incitement to male supremacist violence towards other bodies, in particular (but not only), women.

The responsibility of the entire discourse developed in this article are shared between its three concerned actors: the office, the writer and the publisher.

THE OFFICE: Here again, a specific targeting at the concerned office, despite its renowned artistic and intellectual reputation, would only allow to exonerate by omission the numerous other offices that operate with exploitative work conditions on a weekly basis: unpaid long hours of work at night, emotional stress (“the best motivator” says the article), hierarchical pressure, and low salaries. The discursive relation between these conditions and the notion of “success” evoked in the article’s title is symptomatic of imaginaries developed by office associating them as cause and effect. The traditional means of implementation of such work conditions goes through a strong hierarchical structure in the office. The display of power is part of the productive strategy of an office and we can think about the fact that many business schools take great pride in teaching a book like Sun Tzu’s Art of War as appropriate internal and external office strategy. In these conditions, it is not innocent to see people subjected to this type of imaginary to push the ethos of such practices to “metaphorical rapes.”

THE WRITER: As the writer says himself, the only way to bear such exploitative conditions consists in learning to love them. By experience, it seems fair to say that the only thing that will make a young architect – it is probably true in other professions – cope with the long hours, if not all-nighters, at the office is the idea that (s)he will be able to show off rather strangely to have survived them: “I slept only 2 hours last night!,” (s)he will say proudly, not realizing that (s)he is discursively justifying the system from which (s)he is a victim. Not everyone is a victim to same degree however and, in such a context described above, normative behaviors and their verbal violence (in particular between genders) find a particularly appropriate resonance.

THE PUBLISHER: It might not be innocent that the publisher involved here uses some of the tricks of the cabinets of procrastination that have flourished these last years thanks to their spreading through social media. The idea is to go fast, often write in the form of lists and use titles that will catch the attention of social media surfers whose assumed short attention span will find comforted by such a digested form of information — we can highly suspect that the title here and its notion of “success” came from the blog, not the writer. In the specific case of this article, it does not matter much whether the blog considered that such a text could be published, or that they did not even spend the time to read it before publishing it, their responsibility being the exact same in both case.

To conclude, and to follow the advice of friend Mimi Zeiger about this matter, we should insist on the fact that there are multiple architecture offices that attempt to develop a more fair and “healthy” (using Mimi’s words) work environment than the ones described above. This can intervene at various levels, but it becomes particularly remarkable when it touches the economic and creative governance of the office itself. This is not an argument for a new paradigm of productivity in which employees that would have been solicited in the daily decisions of a given office would be more “self-fulfilled” or any other adjective we are now regularly served by the ‘cool hierarchies’ implemented by companies like Google. Rather, this is an attempt to articulate a vision in which someone’s labor and the strategy for which it is used are not fundamentally separated, this separation forming the bases of exploitation and the discursive violence that emerges from it.