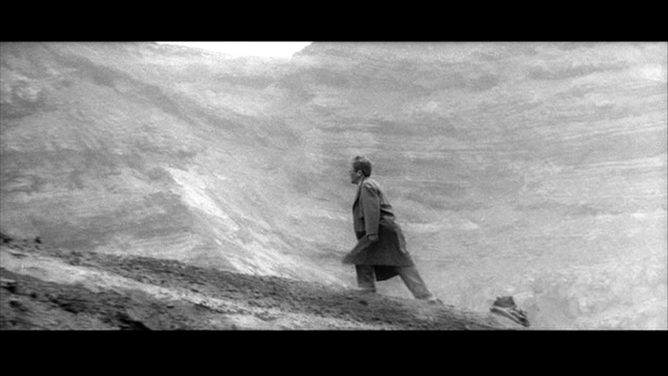 Still of Only the Bad Sleep Well by Akira Kurosawa (1960)

HOMAGE TO GRAVITY: Architecture and the Body ///
An exhibition proposal for the 2013 Young Curator Program at the Canadian Center for Architecture (translated from original French)

My proposal is based on an axiom in the form of a definition of architecture. My intuition is that the latter is the discipline that organizes bodies in space. The various diagrams that we create as architects are as many compositions of lines of power that architecture’s materiality in its intrinsic violence on bodies enforces. The politician architect traces a line on a map, which result in the separation of a nation into two groups. The politician architect traces forming a closed square and a body finds itself prisoner of walls. The politician architect traces the lines of luxurious residential building and bodies are expelled from a territory on which they lived their entire life, while other bodies, corresponding to the societal dominant schemes are taking their place and unfold their mode of existence on the concerned territory.

Contemporary architecture, through the quasi-unanimity of its representatives, seems to ignore the relation it develops with the bodies. Modernism thought that it could “cure” them but by considering standardized bodies, it only contributed to substantially reinforce their normative characteristics. Strengthen by a post-modern cynicism, architecture now refuses to consider bodies in their multiple and complex anatomy and biology, in order to dedicate its effort to its cost and appearance.

If we truly want to think about a political architecture – of course the notion of political architecture is a pleonasm if we consider the definition considered as axiom here – we need to first lean to question the relation that architecture and bodies develop together. This is why this exhibition project introduced here is choosing to dedicate itself entirely to this relation. In order to do in it a rigorous and precise manner, I propose to focus this research on the surface with which gravity forces bodies to be in contact on a quasi-permanent term: the ground. Of course, the ground is not to be thought in the Corbusean “dom-ino” terminology here that systematically distinguishes it from the walls and the ceiling. I propose instead to define it as a surface that the bodies can physically “conquest” in the same way that we conquest a mountain or a rock.

There are many instances of architecture including a ground that can trigger such a conquest by the body. Numerous playgrounds – the notion of ground in this term is not innocent, nor is the one of terrain in the French terrain de jeu – as well as skate parks are part of these architectures. My proposal is primarily based on two works that have been dedicated to this question between architecture and the body: the Oblique Function created and constructed by Claude Parent and Paul Virilio starting the 1960s and, later, the work of the Reversible Destiny Foundation as it has been elaborated for a three decades by artists-poets-philosophers-architects Arakawa and Madeline Gins.

The Oblique Function imagines the development of the slope in architecture at multiple scales: furniture, houses, buildings and urban design itself. Its urban drawings, through their radicality and totality, contrast with the achieved buildings, more subtle and precise: Sainte Bernadette Church (Nevers, France), the French Pavilion at the 1970 Venice Biennale, and Claude Parent’s own apartment. These instances propose a skilled balance between a manifesto vision and an effective application. The various diagrams drawn by Claude Parent are also useful for an understanding of what is a stake with such an architecture. Several of them illustrate the forces at play: the weight of each body, of course, but also the forces of potential and fatigue created when the bodies undertake to go up or down the slopes of the Oblique Function. In both cases, the body is challenged and thus experiences an awareness of its own materiality. Other diagrams show the various degrees of inclination that a surface can adopt between the 0 and 90 degrees of traditional floors and walls. In them, he also includes the slopes that Virilio and him experimented and constructed.

The Reversible Destiny Foundation was created by Japanese and American couple Arakawa and Madeline Gins who, since the 1960s, have been working on this same question around the body in the built environement. About twenty years ago, they affirmed a poetic manifesto with an architectural agenda: “we have decided not to die.” Their architecture attempts to carry within itself a large amount of procedures that engage the non-normalized body to die slower than in ‘normal’ conditions in which the aging entropic process. In addition of the conception of multiple architectural and artistic projects, they have built five architectures that undertook this manifesto: a monumental artwork, a multiple-hectare park, a collective housing building – all in Japan – as well as a house in Long Island and a complex stairway in the United States. Each time, the ground is one of the many aspects of these projects’ vitalism; however, it is the most radical element  since it is built as an interior terrain to which the body has to adapt continuously, thus forming what Arakawa and Gins theorized under the name of “architectural body.” The latter consists in an assemblage of animated matter (at various scale) subjected to agency in a permanent manner.

This last point allows me to evoke the philosophical work that appears to me as linking all these architecture for the body in a domain called “joy” by Baruch Spinoza. This Portuguese Dutch 17th-century philosopher, while wondering what a body could really do, established an ethics for which joy is produced by an increase of power (potential) of bodies. This increase is effectuated when a harmonious relation is developed between two material assemblages (architecture and the body for instance). This relation is precisely the object of this proposal, and the exhibition’s introduction won’t miss to introduce this philosophy in a comprehensive manner.

The Oblique Function and the Reversible Destiny are used as paradigms here, but such an exhibition needs to use numerous other examples: playgrounds and skate parks evoked above, the vitalism of I’ve Heard About and its Hypnosis Room (R&Sie(n)), the appropriable matter of Verner Panton’s design, the long spiral of Frank Lloyd Wright’s Guggenheim Museum, the slopes of the Rolex Learning Center (SANAA) celebrated by its fake skiers, the rotating modules of Guy Rottier, Alles Wird Gut and Bureau Spectacular, the brick wave of Steven Holl’s Cité de l’océan et du surf, the various projects of Didier Fiuza Faustino, etc.

Playground in Belleville (Paris) by BASE (2008)

The ambition of this exhibition is also to work on its own ground, and thus to create a terrain that would propose to the visitors the possibility to experiment such an architecture while looking at these paradigmatic examples. This device is illustrative of the architecture that this proposal attempts to promote: the potential object of a rich and complex philosophy, as well as a surface affordable and understandable by all, since directly experienced by the body itself. We have, we are, all a body and the relation we have with this surface intervenes in the domain of haptic. In this regard, one of the first ‘assignments’ I experienced when I visited all projects by the Reversible Destiny Foundation, consisted in walking on this terrain while closing my eyes, trusting my feet, in contact with this surface, as well as my ‘atmospheric’ senses, able to give me indication regarding my position in space. There is thus a real pedagogy for all in these architectures: an empirical pedagogy that concerns us all as bodies, children, adults, elderlies, “able,” “disable,” etc. To integrate such a terrain within the exhibition itself would thus allow all to experience this immanent pedagogy.

“What can a body do” asked Spinoza. We can imitate him and ask “what can architecture and the body together do?”