Léopold Lambert – Paris on July 9, 2018
If you enjoy articles of the blog, have a look at The Funambulist Magazine!

Yesterday, Sunday 8th July 2018, the architecture collective Adresse and the political organization La Révolution est en marche (The Revolution In Action, a name as a commentary to President Macron’s political party, La République en marche) led by activist Hadama Traoré were gathering a few dozens of residents of Aulnay-sous-Bois (northeastern Paris banlieue municipality), as well as their supporters to present the architectural project they designed as an alternative to the planned demolition of a building known by many in Seine-Saint-Denis: the “Galion.” Built in the 1960s and adopting a longitudinal architecture bridging over a street, it is the most charismatic building of the cité des 3000 that was aimed to host the workers of the Citroën factory nearby, and was recently the site of several demonstrations to demand that truth be made in the death of local 24-year-old Tunisian French, Yacine, whose family suspected the police to have disguised the evidence of its responsibility. Almost a year later, graffiti reading “Vérité Pour Yacine” (Truth for Yacine) and posters calling for mobilisation are still plethora in the 3000, including on the walls of the Galion itself.

Its colonial name notwithstanding, the Galion is a building that constituted for many years the commercial center of not only Aulnay but also of the neighboring municipalities — a friend from La Courneuve present yesterday was telling me that she would often come with her family to do groceries on Sunday afternoons like yesterday’s — as well as the homes of 180 families who were living in the social housing units of the upper floors and who have been evicted and rehoused in the recent years. Aulnay is currently the site of deep territorial modifications as part of the “Grand Paris” project: the construction of a new subway line a few dozens of meters from the Galion and, like for many other banlieue municipalities, a transformation of housing that develops various forms of gentrification. The destruction of the Galion is a fundamental part of this policy; hence the importance of the fight led by Hadama Traoré to have it renovated and transformed for Aulnay’s current inhabitants, rather than destroyed to make room for new wealthier ones, attracted by the future proximity with the subway.

Traoré has therefore asked for the help of young architects (Selim Zouaoui, Karima Lebsir, as well as a few others) who grew up in the banlieues and were recently trained in architecture schools in Paris before forming the collective Adresse, which aims to work on a range of banlieue architectural projects in collaboration with current residents. They therefore presented their proposition for the Galion project yesterday, along with the artists with whom they collaborate (Joel Degbo, Nathalie Muchamad, and two others, absent yesterday) in order to work with the residents and neighbors’ plural memories linked with the Galion. Intrigued locals as well as relatives, friends, and supporters of Traoré thus gathered and listened to an introduction of the project from the perspective of political activism (Traoré), architecture (Zouaoui) and art (Degbo & Muchamad).

At that point, it ought to be strongly noted that architectural projects that claim to collaborate with local residents are to be always considered with high suspicion. More often than not, this revival of a trend born in the 1970s (whose clear failures and dangers seem to have been gone unnoticed by many architects since then), constitutes a way for outsider architects or artists (often paid by local municipalities that favor a simulacrum of politics) to construct the illusion of legitimacy while the inhabitants’ interests are put in the background, if considered at all. This often comes from the idea that architects have of themselves: their education oriented around the aim of “problem-solving” — something I regularly rant against — often combined with the privilege of their person within society — in the West, architects remain overwhelmingly white and from middle or upper-class backgrounds — makes up for projects that, at best, produce nothing and, at worst, participate to the processes of racial and social exclusion that gentrification and the colonial management of territory constitute.

Although a collective like Adresse and their collaborators should always remain cautious of such a risk — architecture being a discipline that enables the exercise of power, the legitimacy for one to practice it can never be total — their positioning strongly contrasts with the one adopted by those described above: their incarnated knowledge of the banlieues is natural and internalized as they grew up and continue to live in them for some — such knowledge incites them more to humbleness than arrogance — and their close collaboration with and for the political organization of La Révolution est en marche makes it impossible for them to adopt the usual apolitical attitude of architects who positively refuse to see the antagonist relationship of power between the authorities (municipalities, regions, the state, etc.) and predominantly-racialized residents living in economically precarious conditions. The discourse itself is resolutely different: when Zouaoui declares “it is our memories that are being destroyed when they destroy our buildings as they do everywhere” (quoted from memory), it is far from a universal “us” that he is mobilizing but, instead, one that gathers the multitude of banlieue residents whose families were once colonial subjects of a country whose political representatives and dominant population (“they”) have since never ceased to impose their side of this historical relation, while denying or obliterating subaltern narratives. This collaboration, on the contrary of many others, could therefore establish an important precedent whose effects would go far beyond the narrow range of the discipline of architecture: one that would actually prove effective against the dominant political and urban segregative and dispossessing project to which so many of Adresse‘s fellow architects take part. 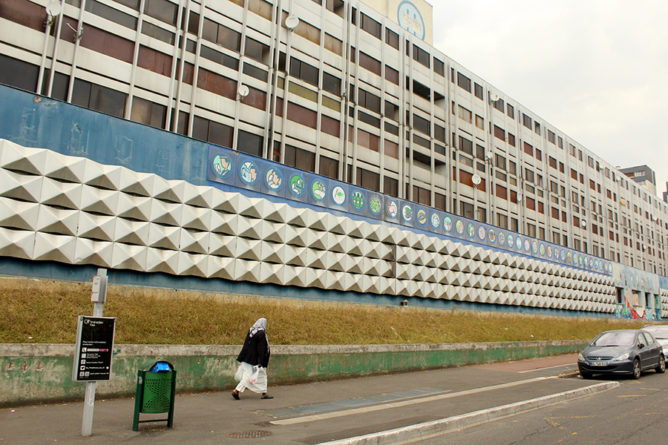 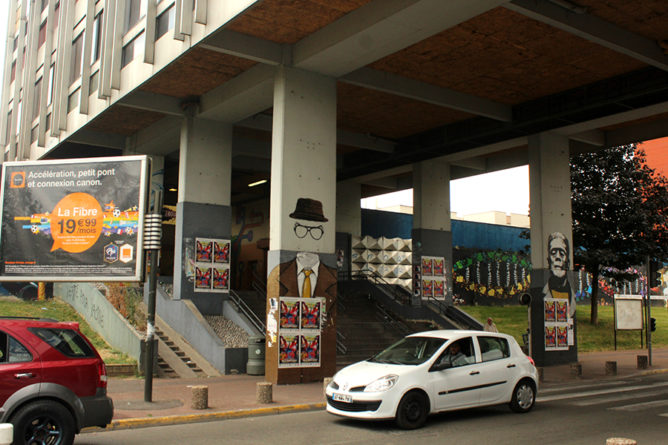 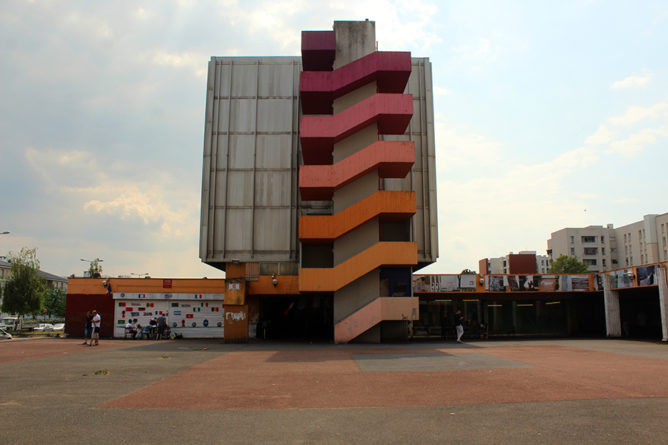 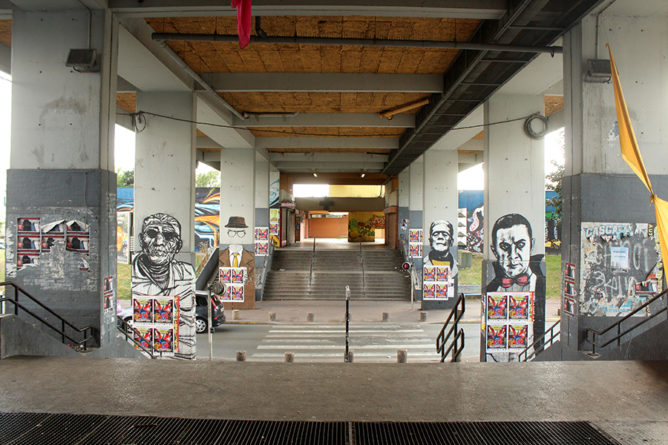 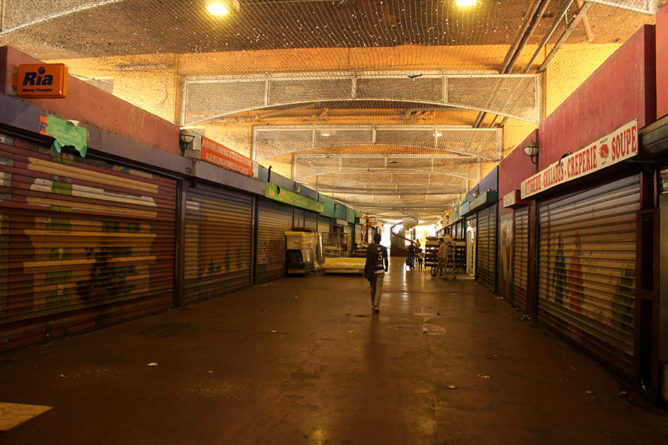 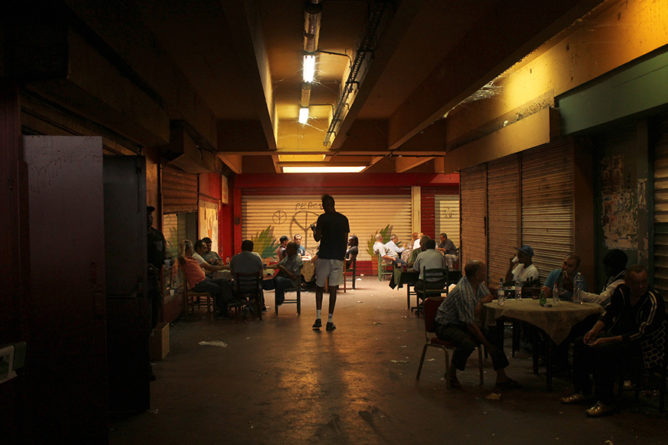 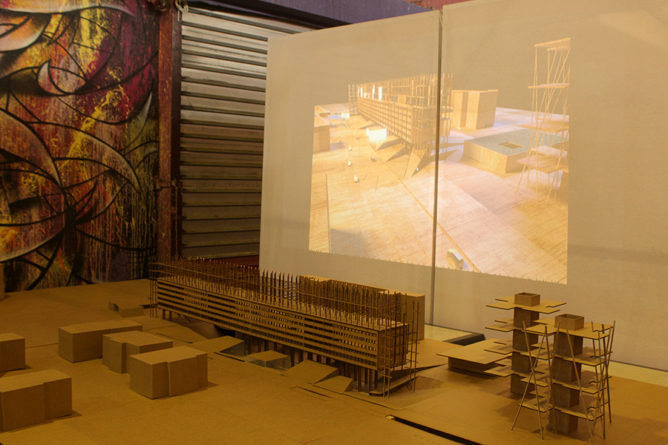 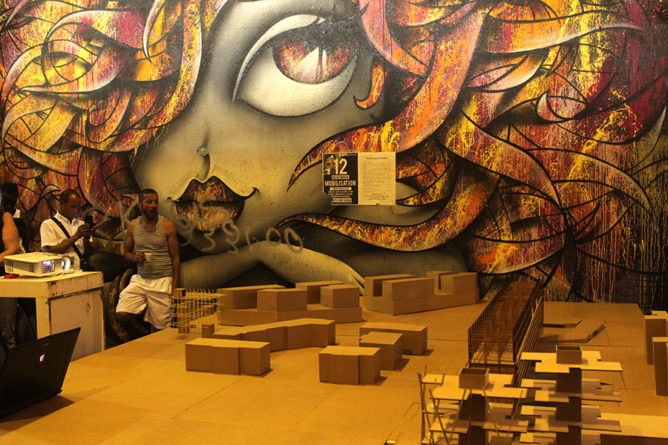