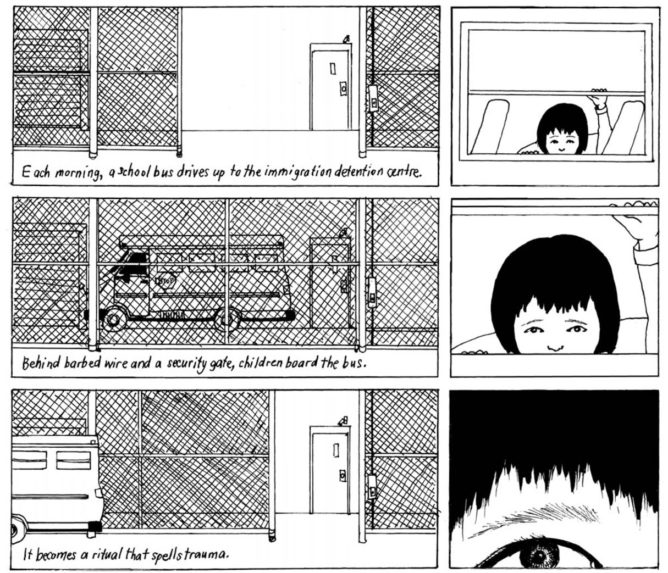 Excerpt of the forthcoming book Undocumented: The Architecture of Migrant Detention by Tings Chak (2014)

The last podcast published on Archipelago is a conversation with Tings Chak, Toronto-based migrant justice organizer (as part of the organization No One Is Illegal for example), as well as a multidisciplinary designer. Tings is about to publish a graphic-essay book entitled Undocumented: The Architecture of Migrant Detention (The Architecture Observer, 2014) that articulates the two aspects of her work as an organizer and as a designer. In her Funambulist Paper entitled “Racialized Geographies and the Fear of Ships,” she had already exposed how the historical and contemporary treatment of migration depends on considerations for the very bodies of the migrants themselves. Most of them are either refused, expelled, marginalized or incarcerated. In Undocumented, she engages the architectural typology of the Canadian migrant detention centers at many levels.

One of these levels consits in the legal aspect of the detentions themselves. The latter are not effectuated to punish bodies, but for administrative reasons, holding bodies to a location for them to wait — sometimes for years — to hear about whether or not they will be expelled from the national territory or not. The detention is thus not only painful but each body who is detained is not aware for how much time. Another level is the administrativization of the bodies:

Status is a fickle thing,
it can be taken away from you,
and at any moment,
it can be lost.
.
It determines
your identity,
your rights,
your access,
your freedom.
.
But your name is more than a series of romanized letters, phonetically transcribed that, when uttered, can never capture its weight.
It can never come close to the language your given name was given in.
Your place of birth has nothing to do with the treachery of borders, violently imposed onto our bodies, between our families, and throughout the the places we call home. (Tings Chak, Undocumented: The Architecture of Migrant Detention, Westmount: The Architecture Observer, forthcoming, 92.)

Another important aspect of the carceral system (migrant detention centers and other prisons) in North America can be found in the massive privatization of its daily functional components thus creating businesses that have crucial interests in the ever-growing number of detention. In the United States, there are even 18 fully private prisons since their authorization by the Reagan administration. They are also named “for-profit prisons,” which illustrates the fundamental problem in the relationship that it creates between capital and incarceration.

Considering the political, legal, administrative, and economic aspects of migrant detention centers give us a schematic structural vision of Western countries’ policies; however, as always we should not forget the strict architectural dimension of these centers.

Excerpts of the forthcoming book Undocumented: The Architecture of Migrant Detention by Tings Chak (2014)

In the previous pages, Tings examines the tight relationships between the incarcerated body and the architecture that surrounds it. The two first pages describes the various existing cells hosting bodies whose life is administrated (prisoners, undocumented migrants, refugees) both existing in the United States and Canada, and recommended by International organizations like the Red Cross and the United Nations High Commisioner for Refugees. The two following pages insist on the way space is organized so to frame the body and thus determine/control the limited positions that a body can adopt in such small volumes. The clinical aspect of these drawings is complemented with various testimonies collected by Tings as fragment of biographies. As written above, the complete lack of consideration for migrant biographies is part of the administrativization of their bodies; revealing them thus constitutes a resistance against this process. These testimonies also involve narratives from inside the detention centers themselves. This is how we learn that a detainee once walked the distance equivalent of Minneapolis to Boston inside his cell. Other stories involving the past and on-going hunger strikes that some detainees have undertook illustrate other forms of resistance against this administrativization.

Tings and I finish this conversation by the various actions in which she took part with No One Is Illegal in Toronto in the recent years. On February 21, 2013, an important achievement was made in this struggle as the city of Toronto was declared as a “Sanctuary City” that provides municipal services to all residents without any policing based on the documentation of bodies or their parents (like in the case of school). As a European, the way I read the importance of sanctuary cities consists in the diminishing of the continuous fear that undocumented bodies (“sans papiers” in France) have to experience when any random police officer can verify the validity of their territorial stay without any other reason to ask than the biased suspicion manifested in front of dark bodies. In regard to sanctuary cities, it is interesting to note that while migration policies and their exclusionary violence are elaborated at the scale of nation states, cities incarnate a smaller scale of governmentality that understands better the interest to diversify its population and this way, be more integrative. More and more we will see that countries are irrelevant and obsolete when cities would be able to evolve within political archipelagos (see past article) functioning at scales where bodies and their biographies can be fully considered.