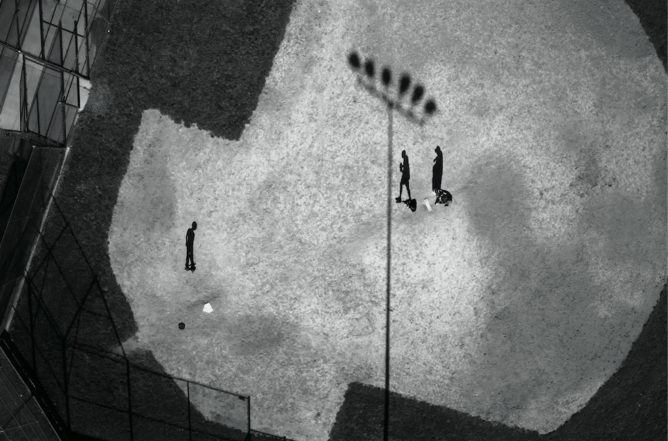 The latest conversation I released for Archipelago was recorded on May 9, 2014 with Derek Gregory at the Peter Wall Institute (University of British Columbia) where he is one of the two distinguished professors. I take the opportunity here to synthesize the main points we discussed, as well as to attempt to develop my own reflection under their influence. The topic of this conversation, as well as Derek’s extended and precise expertise, is the so-called “war on terror” that the United States and their military allies have been executing since the end of 2001. This war, more than any others, necessities the mobilization of all disciplines (geography, anthropology, architecture, medicine, law, etc.), and their weaponization to serve the functions of war. Approaching them in such a way might already be misleading as these disciplines might very well be inherently weaponized as Derek recalls in the conversation: “geography is mostly used to make war” (Yves Lacoste).

Derek distinguishes three spaces that need to be produced in order for this war to operate. “The space of the target” constitutes in the geographical and technological allowance to physically target bodies or objects. “The space of exception” manufactures spatial and temporal situations where bodies are stripped from their legal rights. “The space of the enemy” consists in the intervention in the imaginaries of the populations that fund this war, i.e. the production of a status of definite and absolute otherness to the bodies attacked. Without these three spaces, the war cannot function, as we sporadically observe when one of them tends to momentarily fail.  For the purposes of this article, we will look at each of them individually.

It is difficult to talk about the space of the target without evoking the paradigmatic technology of contemporary warfare: the drone. However, when addressing it, we need to be cautious as the current indignation against its systematic use under both Bush’s and Obama’s administrations carries multiple retroactive legitimizing elements for the use of this weapon. Often status quo are not as much preserved by wrong answers as by wrong questions. The question to know whether or not an American citizen can be executed abroad by a drone without any due process is symptomatic of such problematic attitude: wondering if an American citizen can be killed through this process retroactively legitimize all other executions and their “collateral damage” when they do not target American citizens. Similarly, the explicit demands to give access to the attack protocol that the American president has to follow in order to order such an assassination implicitly acknowledges that there are conditions in which these protocols would be legitimate.

Furthermore, many critiques seem to manifest a macabre fetichization for the object of the drone itself. Such a fascination can only be symptomatic of an absolute inability to fathom the effects of this weapon, as well as a partial misunderstanding of its mode of functioning, as Derek explains. Far from the simplistic scheme of two soldiers operating the drone with a joystick in Nevada while the drone itself flies somewhere in Afghanistan, Iraq, Pakistan, Somalia or Yemen, every attack requires a heavy coordination effort ‘on the ground’ by the U.S. Army in order to achieve the assassination that was designed for it. The causes of such a fetichization can be seen in the modernist fascination for technology acting a substitute for magic (the essence of the fetish), as well as the terminology used by the military itself. The very notion of “surgical strike” or “targeted assassination” — what is a non-targeted assassination? — transmits an idea of precision that has nothing to do with the real effects of a drone attack. As I wrote in a past article about Grégoire Chamayou‘s Theory of the Drone, each targeted body carries with him an intensive sphere — the space of the target is certainly volumetric — that will share the precariousness of his life with all other bodies also present in this sphere. What Derek calls “the shadow of the drone” constitutes in the ubiquitous and continuous effect the drone has on the societies it targets. Everyone lives in the fear of being located within one of these intensive spheres and thus tends to adopt a less social behavior to attenuate this fear.

The space of exception has been evoked several times on the Funambulist. We however tend to forget that the “suspension of the law” is not enacted by the absence of the law, but rather by the most violent incarnation of the law. The bodies assassinated by the drone, as well as those kept prisoners in Guantanamo’s Camp Delta are thus as subjected by the law as they can possibly be. It would be naive to think that law is never produced for political opportunist reasons. As Derek recalls, the international legislation that are often claimed in a non-debatable transcendence — something I often do I have to confess — were designed by the winners of the Second World War in their own interests. Nevertheless, an indication of the political intensity of a legislation can probably be seen in the time that separates its conception from its application to the fullest extent. In other words, laws are often designed in the anticipation of future situations in which they would be needed to arbitrate situations. However, we also see many legislations that are designed simultaneously with the situation that they are supposed to arbitrate. The paradigms of such extreme weaponization of the law can be seen in the vote of the Patriot Act by the American Congress, only two weeks after the September 11, 2001 attacks occurred in the United States, as well as in the daily work of the Israeli army’s legal corps that manufacture law for its own colonial purpose as I have been writing in a past article about Ra’anan Alexandrowicz‘s film The Law in these Parts (2012).

The space of the enemy, finally, can be explained by the context in which war are funded. Representative democracies are required to a certain extent  to seek the agreement of their citizens — or rather, their non-disagreement — in order to execute this war. In order to do so, the collective imaginary has to be produced in such a way that the bodies targeted by the war would be considered as essentially and absolutely different. This point is carried by Derek all along the conversation: if an identification can operate between the bodies who fund the war and those who are subjected to it, the military action can potentially become illegitimate. From the press to the cinema via political speeches, every aspects of the production of imaginary is thus mobilized to propose a consensual vision of “the enemy” that will only vary a little to pretend a plurality of discourses. This consensus allows ourselves to experience indignation on a daily basis. When this indignation targets “the enemy” itself — the recent events in Nigeria are a good example — the legitimization for any military action is automatic. The indignation targeting some behaviors of the Western army also legitimizes the latter’s intervention since it implicitly recognizes that every behavior different from the targeted one does not deserve the indignation.

A few recent projects have been trying to confront Western populations with the violence of the war they fund through a graphic identification to the targeted bodies. This is the case of the work of artist Thomas van Houtryve who uses footage from a civil drone in the United States and convert it into a military imagery in order to trigger a transposition of the drone attacks in Afghanistan, Iraq, Pakistan, Somalia and Yemen into a situation that American citizens would consider as domestic. To some extents, this is also the sense of this video released by the NGO Save the Children, which shows a Western little girl whose peaceful life turns into a nightmare when war shatters her (recognizably Western) life environment. This video was made to address a Western audience about the horrors triggered by the Syrian government against the population of Syria stigmatized as rebel. These campaigns, just like many Hollywood films, fail by where they try to succeed: their spectacularity. “The space of the enemy” cannot be merely deconstruct by components of an imaginary that relies on punctual emotions. The way they operate is, once again, symptomatic of a centralization on the Western world itself: “what would happen if this violence would occur here.” The deconstruction of the “space of the enemy” cannot occur through the transposition of violence to this egocentric “here”, but rather, through the intimate experience of the profound similitude in non-spectacular ‘normal’ behaviors and habits of daily life. Only through this similitude can the essential and absolute status of the otherness appear in all its absurdity.