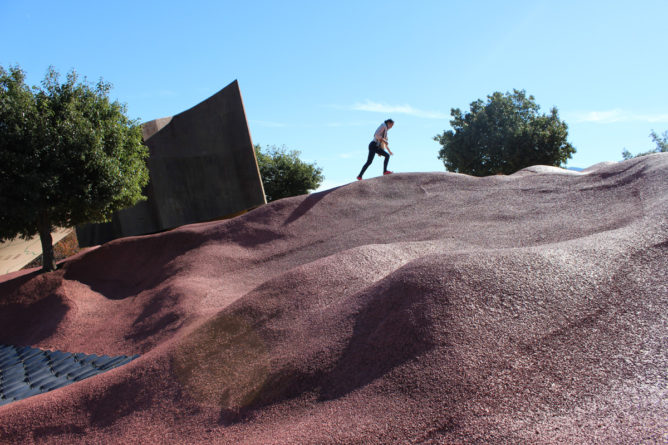 I had recently the great chance to (re)visit two of the three architectures designed by Arakawa and Madeline Gins in Japan, namely Yoro Park in Gifu prefecture and the Mitaka Lofts in Tokyo. Being familiar with their vision and work for several years and having been collaborating with their office for a year and half does not prevent me from being struck each time I physically experience their architecture. In it, the body is continuously stimulated by the situations created around it and with it. I however already wrote many times about their work and dedicated one of the Funambulist Pamphlets (volume 08) to it, and I hope not to repeat myself in the following article. The main argument that I would like to establish through it, concerns the political interpretation of the body that this work provides.

On the contrary of many architectural and political discourses, Arakawa and Gins’s is constructed much less on what it claims to know, than on what it embraces to ignore. It appears more and more to me that all forms of corporeal violence (racism, misogyny, transphobia, homophobia, etc.) can be said to be built upon a complete knowledge of what a body is. In other words, essentializing a race or a gender, whether to value it or denigrating it – it is ultimately the same thing – would constitute in saying “I know what a body is.” The architectural corollary of such an hypothesis is that an architecture designed through a specific (conscious or not) idea of what a body is – the standards set by Le Corbusier, Ernst Neufert or Henry Dreyfuss are only the most explicit visions of this idea – inevitably creates an appropriate environment for such corporeal violence to take place.

Not thinking of any particular body while designing architecture can prove difficult if not impossible; yet, we can consider socially marginalized bodies in an effort to redistribute violence in a given society, or more precisely embrace our ignorance for what a body is. Arakawa and Gins did both: on the one hand, they design for both autistic and neurotypical children, for elderlies, and other bodies feeling the violence of standardized architecture on a daily basis. Their fascination for the figure of Helen Keller – Gins dedicated an entire book to her – constitutes, in this regard, a manifesto against the incarnated categories invented by society as a retroactive justification of its normative organization: not being able to see or talk is only a handicap in societies built upon the axiom that a body can see or talk. On the other hand, Arakawa and Gins were not necessarily supporting an embrace of a body’s marginalization stigmas in order to fuel a political resistive manifesto, but were rather more interested in denying any incarnated category altogether to favor an acknowledgment for our profound ignorance on what makes a body.

The challenge that many of us, bodies, feel when experiencing their architecture is proportional to the easiness with which bodies, usually challenged by the standardized environment, experience in this same architecture. In a conversation soon to be published on Archipelago with Momoyo Homma, the director of Arakawa/Gins office in Tokyo – Joke Post being the director of the other office, in New York – she was telling me that her mother, who normally cannot walk without her cane, had no problems navigating on the bumpy floor of the Mitaka lofts. The terrain offered by their architecture constitutes a space of experimentation of what a body can do (see the Archipelago conversation with Erin Manning about this Spinozist question). Through the non-determination in advance by the architects of what should be done and could be done in the space they produce, some hypotheses to answer (never fully) this question can be constructed. Embracing our ignorance for what a body is and can do – which is the same thing – allows us not only to situate ourselves within the larger scale of time of species’ evolution, but more importantly (in my opinion), it constructs a society in which incarnated violence lacks of ‘grip’ to exercise itself.

To conclude, let’s stress a few points not to leave any possible misunderstandings. I remain convinced that architecture cannot be a messianic instrument that would ‘liberate’ us; however, it embodies the way bodies are organized in space within a given society and, for this reason, influences the way the latter operates politically. In other words, the Mitaka Lofts are not a miraculous instrument that would resuscitate a septuagenarians’s ability to walk without a cane, it simply reveals that her body only needs a cane in an environment that was conceived for bodies that differ substantially from hers. The cane – another interesting designed object – materializes this difference in that it adds to a marginalized body a prosthetic to make it evolve as close as possible to a normal one. On the contrary, Arakawa and Gins’s architecture offers an environment where the body does not need any ‘corrector,’ since it is not conceived for a norm that each body should reach in order to thrive in this environment. This is, in my opinion, the profound political aspect of their work.

– Reversible Destiny Lofts Mitaka – In Memory of Helen Keller by Arakawa and Madeline Gins (2005) / All photographs by Léopold Lambert (see also the 2013 report from a resident, Shingo Tsuji):