Léopold Lambert – Tokyo on January 5, 2020
If you enjoy articles of the blog, have a look at The Funambulist Magazine! 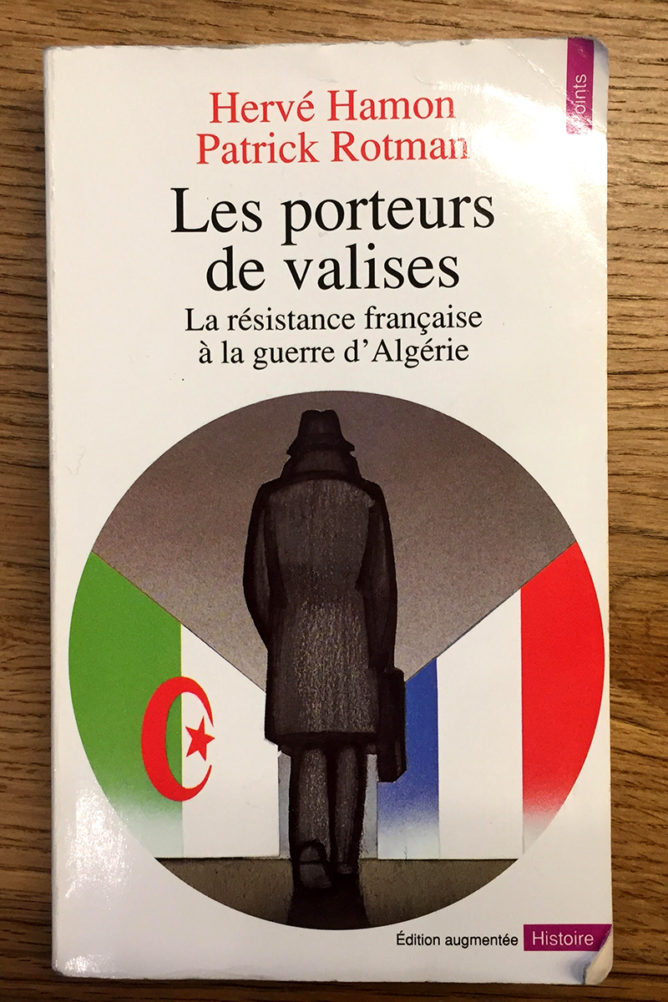 I just finished reading for the second time in two years the 1979 book Les porteurs de valises (The Suitcase Carriers) by French writers Hervé Hamon and Patrick Rotman and, as for the first time, I feel compelled to write something about it, or rather about what it means for the politics of what many people problematically (I think!) call “allyship.” I however measure the difficulty of doing so (I could not write anything that I would deem valuable the first time) since it involves the contradiction of addressing the struggle for the dismantlement of colonial and white supremacist structures by centering for a minute the potential white contribution to it. What follows is therefore a hesitant and doubting sum of reflections that the two readings of the book triggered in me.

The said “suitcase carriers” were an organized network of white French (in majority, intellectuals) active supports of the Algerian Revolution (1954-1962) dependent on the Algerian National Liberation Front (FLN)’s France Federation (“the 7th Wilaya”). It is important to stress that this network was made of French people in France; European settlers in Algeria who joined the Algerian struggle (i.e. settlers who aimed at becoming Algerians) embody a significantly different example and risked drastically more in their action. It is also important to state that on the contrary of the popular belief among the current white Left in France, many of these “suitcase carriers” did not have an affiliation with the Communist Party (and those who were usually resigned from the party after the latter voted the “special powers” to the French government in 1956). The book itself provides a very French-centric vision of the Algerian Revolution, but again, that’s the inherent contradiction of dealing with this topic.

Beyond the book itself however, I believe that this historical example in the context of what is arguably the most canonic/studied political struggle against French colonialism (along with the Haitian Revolution) can be useful to move beyond the concept of allyship. What made the suitcase carrier network somehow useful to the Revolution (I say “somehow” because it is crucial not to overestimate how useful it has been and thus not too fetichize their action) is its capacity to turn whiteness against itself — not to follow a few behavioral rules to avoid embracing a colonial attitude towards Algerians! Navigating fluidly the French space for Algerian revolutionaries (men in particular) was a perilous endeavor, hence the need for white supports (in particular white women, who were more present than men) who could either somehow fluidify this practice, or replace Algerians when it came to carrying money, documents, or weapons in France and in the process of border crossing. Writing and publishing are also front and center of this narrative which, of course, does not leave me indifferent, far from it.

The difference in the risk encountered between Algerian revolutionaries and French supports was also fully integrated within their judicial defense, in particular during the largest trial of the network in September 1960. Death penalty being off the table for the French, their lawyers, in particular the charismatic Jacques Vergès, were able to practice what the latter theorized as “rupture defense” (cf. past post on the topic). This consisted in refusing to play the game of the court and returning the accusation to the colonial system itself. The defendants were risking more severe sentences by adopting such a strategy but they also embraced this risk that would ultimately prove useful for the spreading of their engagement.

Reflections around this historical example allows us to establish a series of significant differences between what is commonly called an “ally” and what a paradigm built on the “suitcase carrier” example would constitute. An ally is, by definition, someone who is able to carry on their own agenda at the same time than momentarily supporting others’ agendas, while a “suitcase carrier” does not have any other agenda than the one set by the struggle they support. An ally is able to momentarily or definitely stop their support, whereas a “suitcase carrier” has made a commitment to the cause that cannot remain without legal/physical/social consequences — very few of the Algerian Revolution’s suitcase carriers will be subjected to the French police torture in comparison to their Algerian fellows as well as to the European supports in Algeria, but many were violently interrogated and incarcerated. An ally is able to get recognition by following a set of predefined rules whereas a “suitcase carrier” gives up individual recognition (in the case of the Algerian Revolution, they even had to join clandestinity) to share collective victories (as well as defeats).

It is difficult for white supports not to fetichize the “suitcase carriers”; many of us today do not have to join clandestinity to turn whiteness against itself (although the various forms of criminalization of antifascist organization certainly suggests the probable return to such a need) and it is easy to build a mythology based on behaviors that, despite their deliberateness, were perceived by many of their authors as the only thing they could do to remain faithful to their principles. It is particularly crucial not to fall in this fetichization, especially since it is not because one made an irreversible commitment that one does not remain part of the structures one aims to dismantle, far from it. This is, again, the contradiction that lies in this engagement since the usefulness of the white contribution to the struggle lies particularly in its positioning within these structures.

Thanks to Hajer Ben Boubaker for her help in the re-reading of this messy text!