Léopold Lambert – Paris on October 17, 2019
If you enjoy articles of the blog, have a look at The Funambulist Magazine!

On October 17, 1961, a few months before the final victory of the Algerian Revolution, the Algerian National Liberation Front (FLN) in France organized a massive pacific march in Paris to show their determination against the curfew that the Prefect of police, the infamous Maurice Papon, in agreement with the French government, had taken against their sole persons a few days earlier — during the 1961-1963 state of emergency in France. 20,000 Algerians joined the march which was met with systematic and deadly violence by the Paris police. Between 200 and 300 Algerians were killed by being shot, beaten to death, or thrown into the Seine river; 10,000 were arrested and detained for several days; hundreds were deported to Algeria — some of these deportations were used to hide the deaths. 2.5 years ago, through a “chrono-cartography” of the event, I have tried to illustrate how the memorialization of this massacre in the streets of Paris tends to be too focus on one particular moment (the very evening of October 17, 1961) and one particular space (the Saint-Michel bridge). On the contrary, this deadly violence in Paris had multiple temporalities and spatialies: it had started in the summer of 1958, a few months after Papon was named Prefect of police after having been a prefect in charge of the counter-revolution in eastern Algeria, and it took place in many spaces of the city and its banlieues (suburbs). You can read a comprehensive account through 25 maps by visiting this former article. 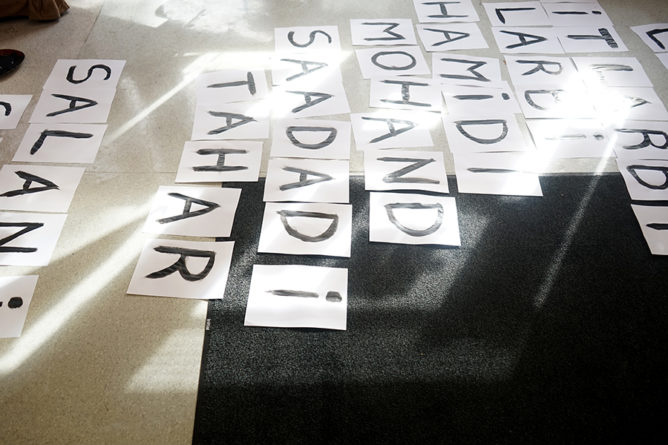 On October 3, 2019, an employee of the Paris Prefecture of police killed four of his colleagues with a knife for reasons that are not fully uncovered for the moment. This uncertainty on the causes did not prevent the President Macron and his Minister of the Interior Castaner to initiate a vicious islamophobic campaign presenting any devout Muslim in France as a potential terrorist who needs to be denounced based on signs as benign as a beard or the refusal to give a kiss to a female colleague. In its article recounting the murders of the four public servants, newspaper Le Monde wrote “Never since the end of World War II did the courtyard of the Prefecture experience such a bloody event.” The journalist may have been in good faith when they wrote this, but if that’s the case, it proves the extent of the white French ignorance regarding the massacre of October 17, 1961, as many of the Algerians who had been arrested in the vicinity of the Prefecture had been brought in the courtyard and were systematically beaten up (sometimes to death) with batons (see more on map 12 below). 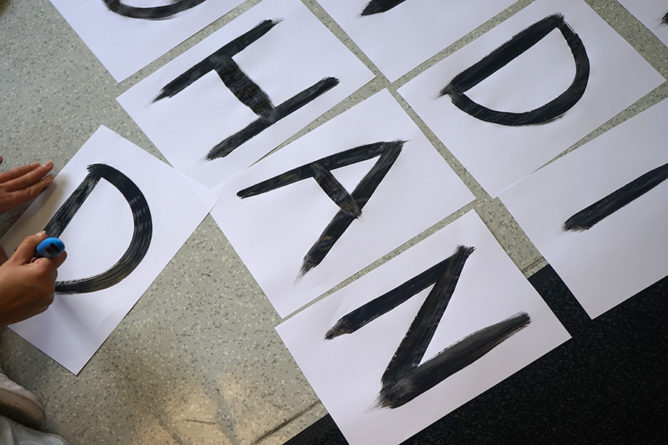 Last night, a few hours of the commemoration of the 58th anniversary of the massacre, a small group of female activists visited several of these spaces to graffiti or glue the names of some of the Algerians who were killed that night. In a particularly intense policed and fascist militant environment, they succeeded in paying an homage to the history of Algerian resistance (one that continues today through the antiracist and anticolonial activism) that goes beyond the authorized (yet very important, of course) setting of the 6PM annual gathering on the Saint-Michel bridge. This is crucial as the very discreet official efforts of acknowledgment of the massacre from the Paris municipality and the French state never target those who are responsible for it (Papon, of course, but also the De Gaulle-Debré government, and the police officers themselves). As Paris former mayor Bertrand Delanoë himself declared on October 17, 2001 when a small official commemorative plate was set up on the side of the Pont Saint-Michel: “This plaque is not targeting anyone” (he meant it as a peace offering to the right wing but he was right: it does not target those responsible). We were happy to learn that the maps designed for the article cited above had been useful to the brave activists who undertook this action and we’re publishing the pictures of their work here as well in association to these maps to insist on the historical significance of each of the places they visited. 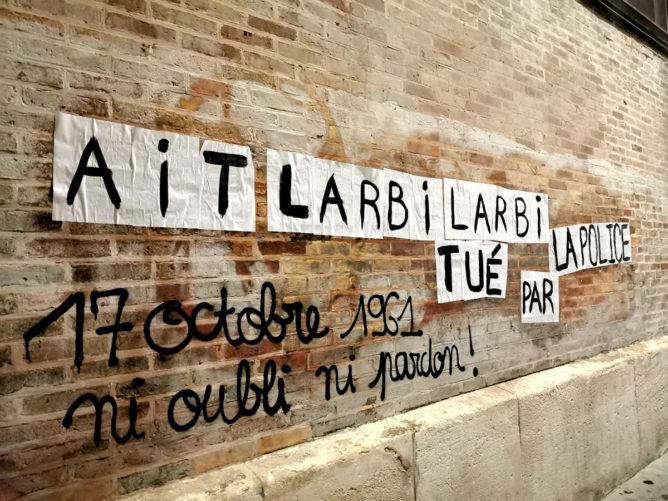 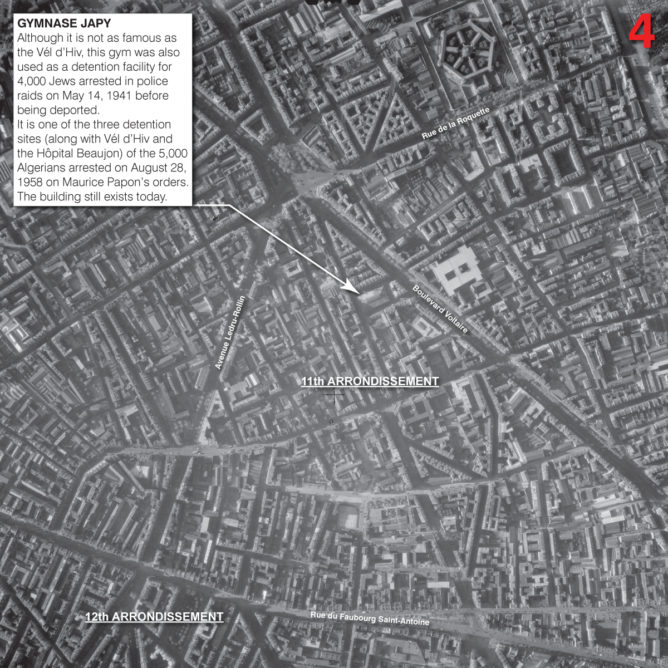 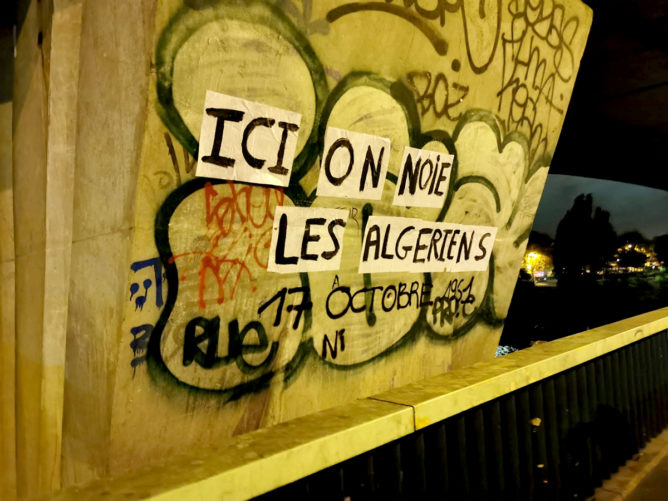 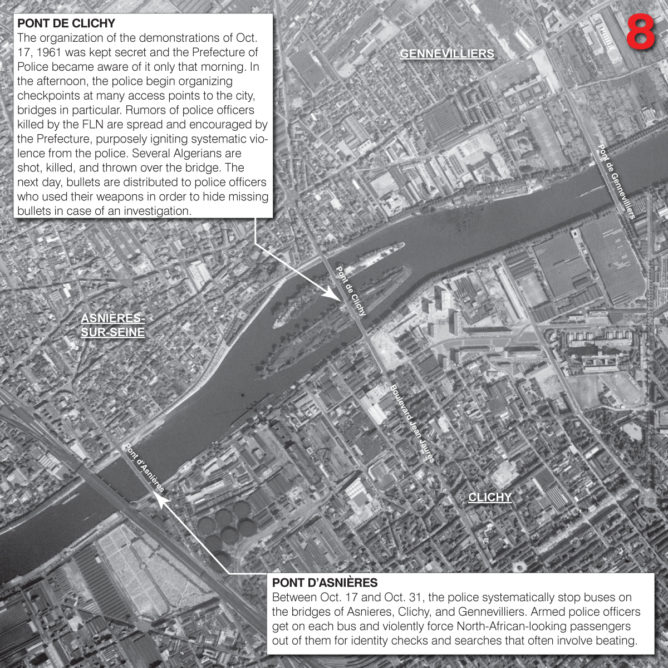 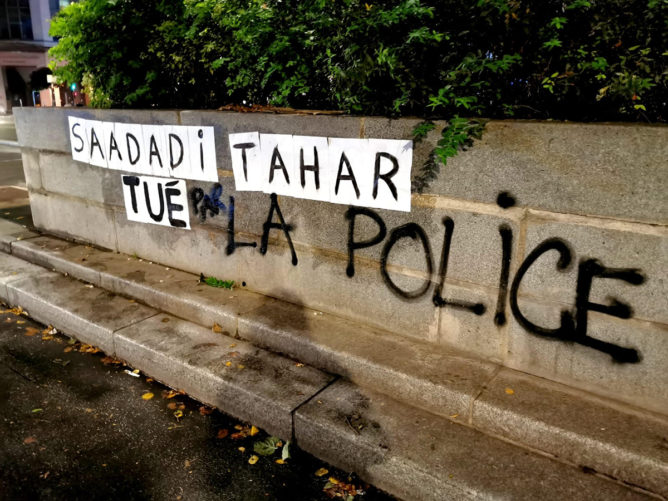 “Saadi Tahar killed by the police” 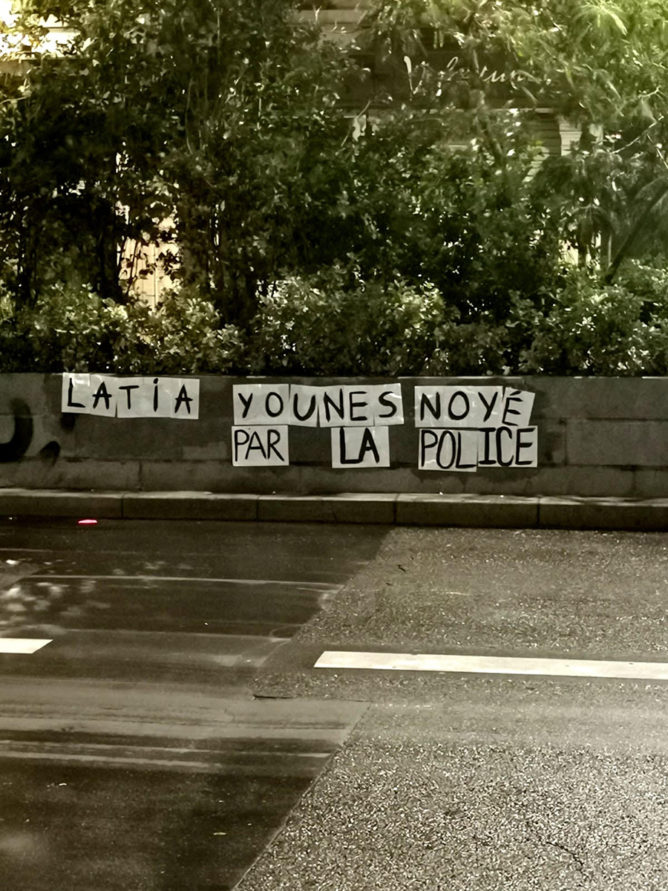 “Latia Younes drowned by the police” 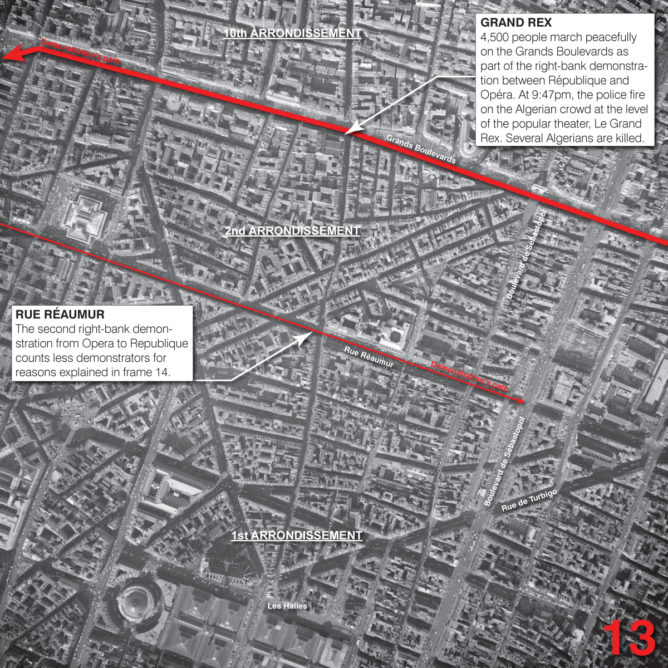 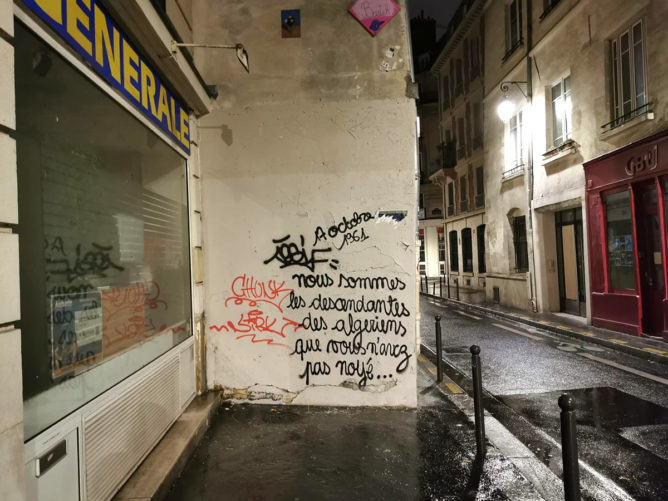 “We are the descendants of the Algerians you did not drown” 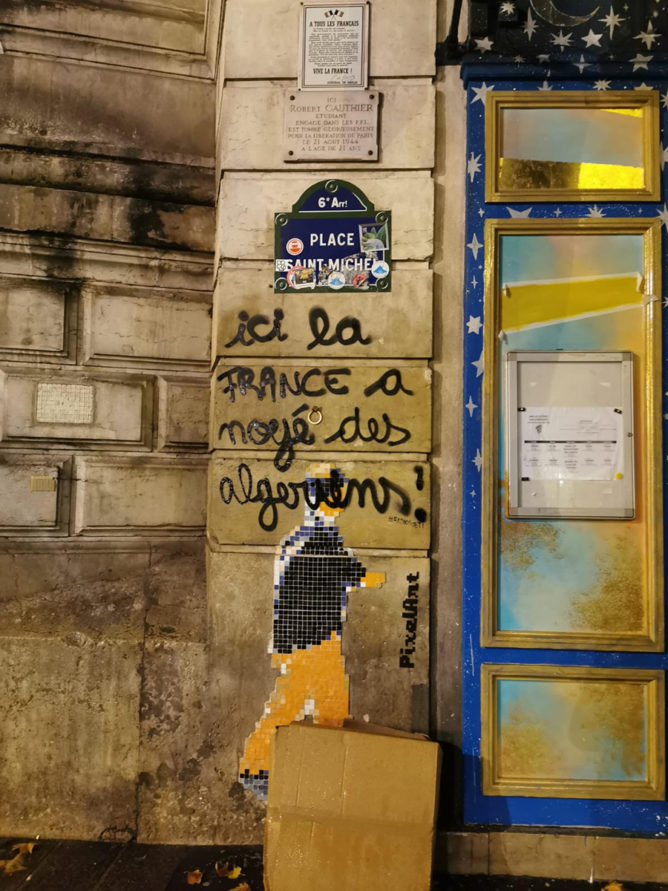 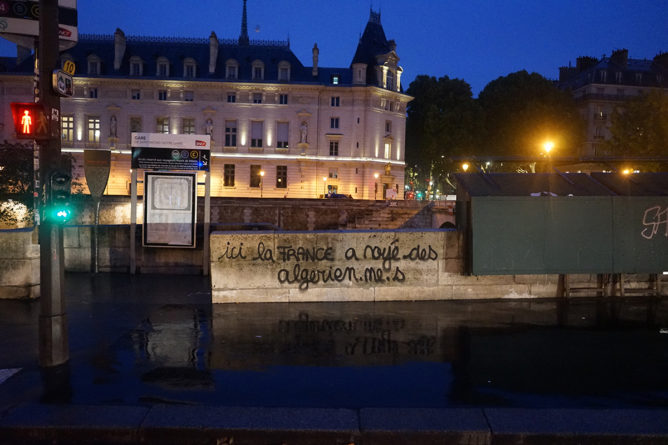 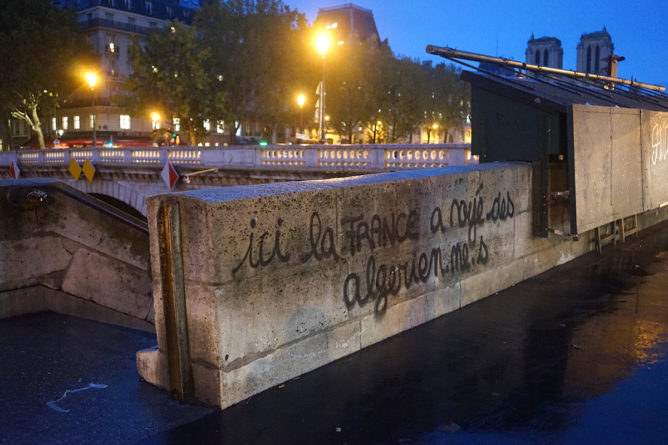 “Here France has drowned Algerians” (on this last picture, the Prefecture of police is visible in the background) 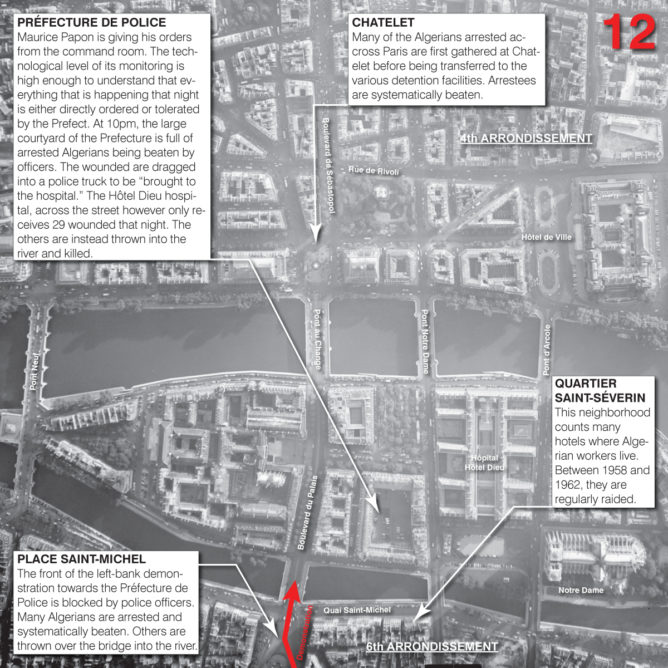 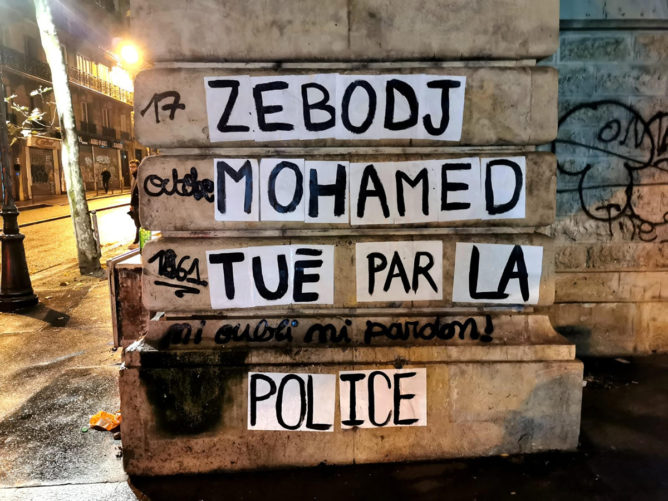 “Zebodj Mohamed, killed by the police. We don’t forget, we don’t forgive” La Goutte d’Or was a prominent Algerian neighborhood during the Algerian Revolution. In July 1955, a revolt against the police occurred and the neighborhood was besieged for a few days. 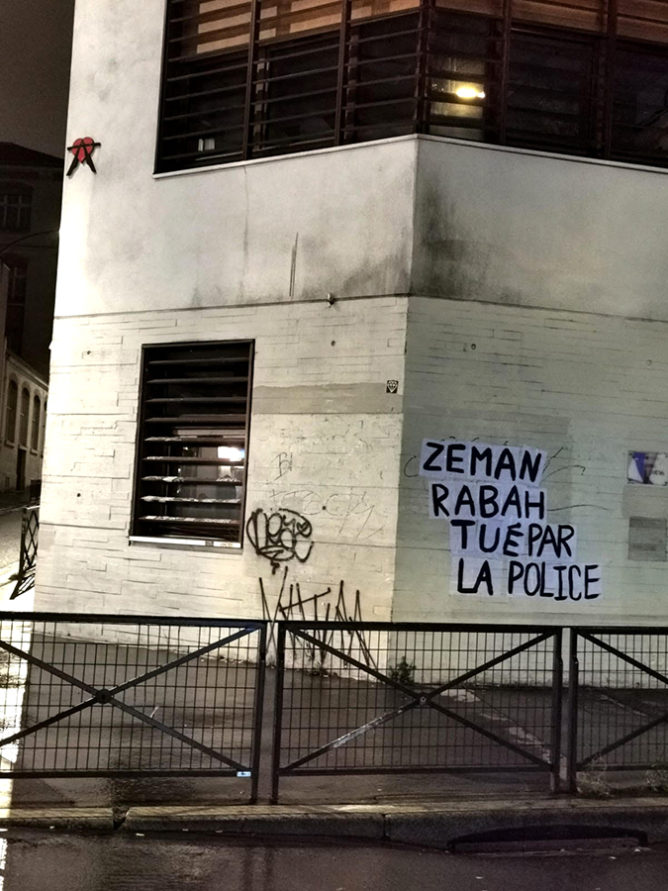 “Zeman Rabah, killed by the police”

The full 25 map chronocartography of the massacre can be read here. (it can also been accessed in French on Vacarme’s website)