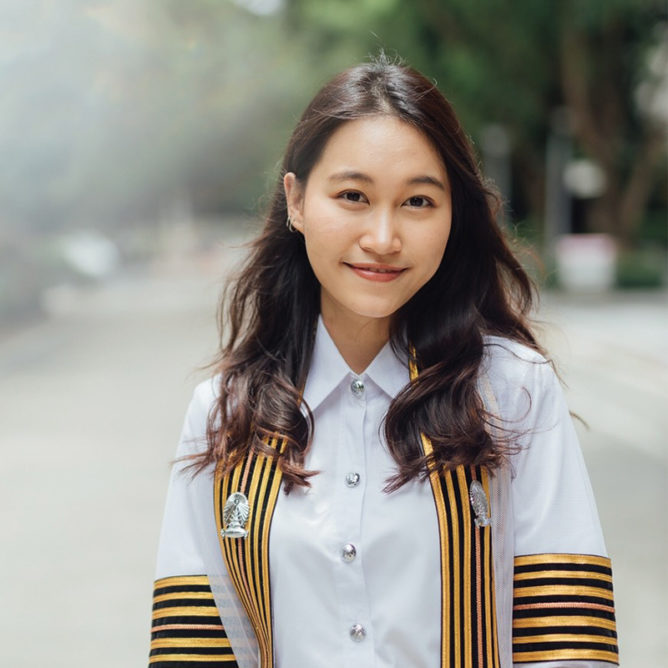 Nattakitta Chuasiriphattana is a freshly graduated from an International program in design and architecture, Chulalongkorn University. Her final year project is a reflection on her identity and her thinking framework as a designer, challenging a typical representation of an architectural project. An attempt to objectify research in a subjective matter and reinterpret the physical term of an Architecture outcome. This project Manifestation of Truth is a design of a theoretical framework of interpretation, understanding the structure of information and exchange path, by researching on crowd analysis and the behavioral transmission from an individual to larger scale. This project is an attempt to express every field of interests she has as a person, social, politics, psychology, history, communications etc. Therefore, being able to expand her point of view on design towards this publication is a great opportunity to explore other possibilities and potential in using architecture as a forensic-research tool. The Funambulist thanks Tijn Van de Wijdeven for recommending her work to us.

Truthfulness, to many individuals, derives from the concept of realism and honesty. However, I argue that honesty does not bring forward the actual truth, because ‘Truth is Subjectivity, and Subjectivity is Truth’. Truthfulness is heavily based on personal interpretation and how information is being exchanged. Thus, this project studies information and exchange through analysis on the structure of crowds of a Thai students protesting against military dictatorship in the 1970’s. Initial approach in compiling evidence is to create a forensic board and drawing connections between every stakeholder inorder to analyze spatial and performative quality of crowds. Observations have pointed out certain factors that define characteristics of crowds such as urban layout, street fragments, crowd structure, communication path etc. Among several listed, information and exchange is one of the most important factors that determine what direction the crowd will be taking; behaviour of a crowd can likely be predicted based on what kind of information the majority receives.

Research is then gathered through methods of forensic archiving and conducting social experiments to understand performative aspects of the protest. Forensic archiving is represented in categorization of evidence from different institutes and creating these periodic archive tables by organizing information according to its sources. I notice that information provided from each institute tends to reflect their political positions, it seems biased and manipulative. Parallel to information gathering, conducting social experiments is another model of testing information layers in an urban context, and to be able to identify structure of information and exchange paths. Which is made up of 3 main actors: the sender, information and the receiver, moreover information is classified into 3 basic categories which are verbal, visual and physical.

Then I restaged the timeline of the protest in this forensic timeline diagram, to track down the locations and moments of exchange between different stakeholders, to observe how information of this event have been exchanged from the actual date of protest to contemporary days. Which led me to the proposal of the ‘Performative City Parade’: an event aimed for participants to experience the city through different interpretations of truth, instrumentalizing the parade with classified components of the event into informative element studies, categorized as Spatial elements, Performative elements, Visual elements and Text elements. I started assembling the tour route based on the location of landmarks in Bangkok, because they are mostly a combination of utilitary usage and political gesture, finding the spatial and connotation relation between each landmark became the base guideline for arranging routes for this city performative parade.

In this parade, there will be 4 themes in total; according to different themes of interpretation. Forensic & Science, which are proven facts with supported evidence. Propaganda & Manipulation, the use of emotive/manipulative languages to propagandist. Romanticism & Censorship, the ability to glorify the event, by censoring out the ugly part. Resistance & Opposition, an idea of opposing general perceptions, forming resistant movement behind the scene.

As defined above, the core concept of each theme. The most important part to curate them is how you construct the narrative and tell the story. The Tableau is an atmospheric depiction of each theme. It has a clear structure of a type of narrative and a protagonist, and the reinterpreted version of spatial quality in each scene.

To conclude the event, this last scene is the symposium scene It will be a collision of four themes, exposing participants to different perspectives, exchanging and accepting different interpretations, to truly create a constructive public discussion on the topic establishing a concept of Manifestation of Truth. 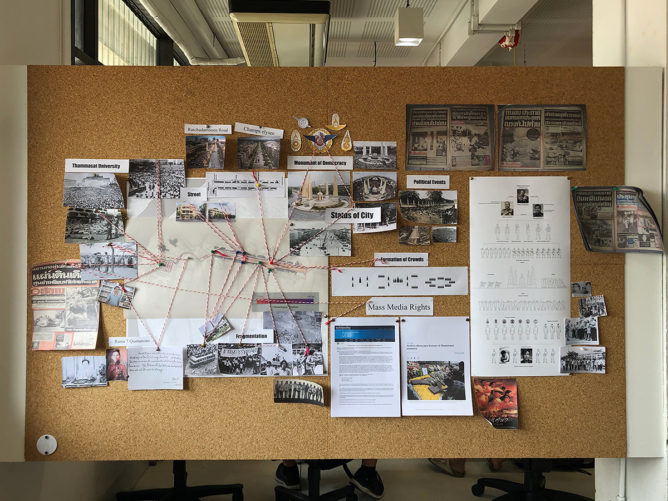 Creating a forensic board which is a collection of evidence leading to analyze spatial and performative quality of crowds. In which I concluded that, information and exchange is one of the key factor that can controls the direction of crowd. 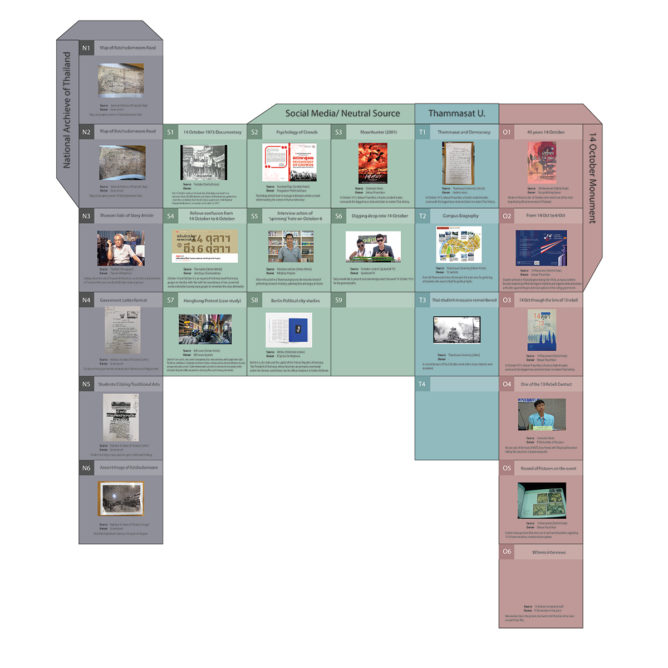 Gathering research by going to different institutes and creating these periodic archive tables to categorize information according to its sources.

Restaging timeline of the protest to track down the locations and moments of exchange between characters.
● color presents different actors
● lines are the locations
● highlighted area and dot lines represent moments of information exchange. 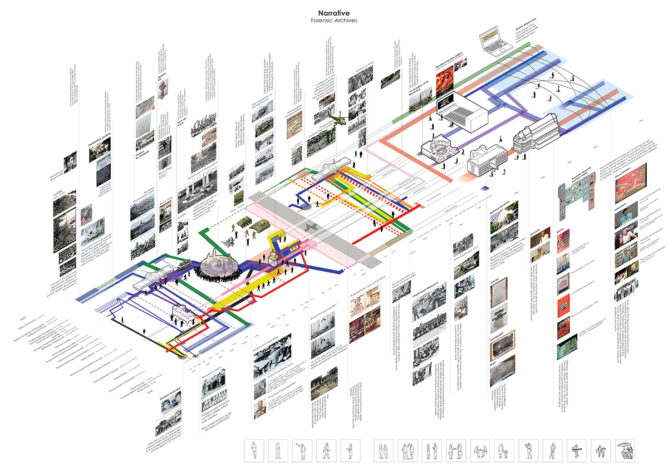 An illustration of the whole process, a collective timeline with forensic evidence towards my design proposal which is a ‘ Performative City Parade tour ‘ aimed for participants to experience the city through different interpretations of truth. 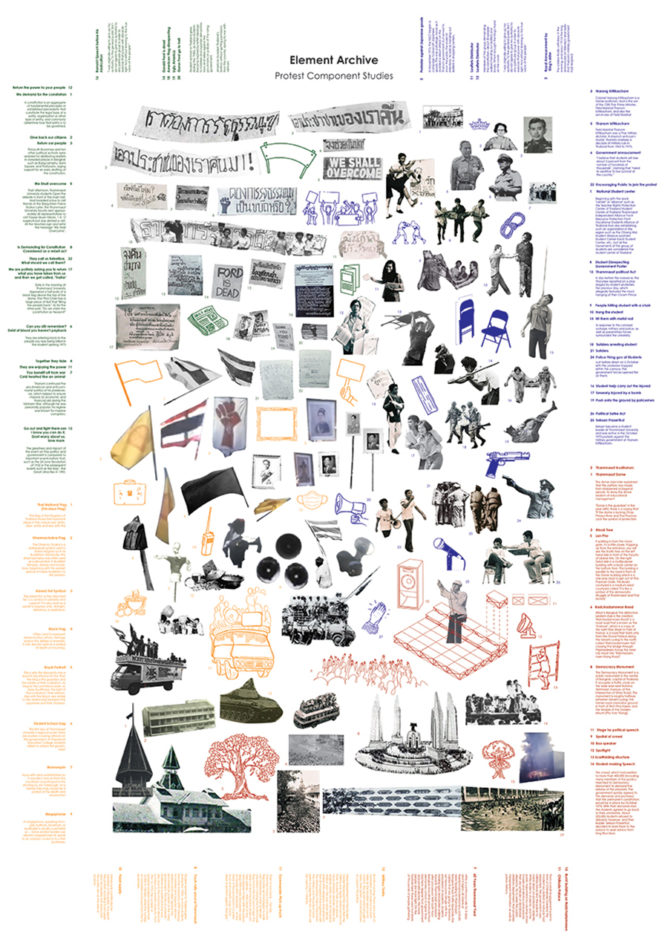 Classifying components of the event into informative element studies, categorized as Spatial elements, Performative, Visual and Text. These mixture of drawings, actual footage and explanations of elements will help instrumentalize the design of this parade. 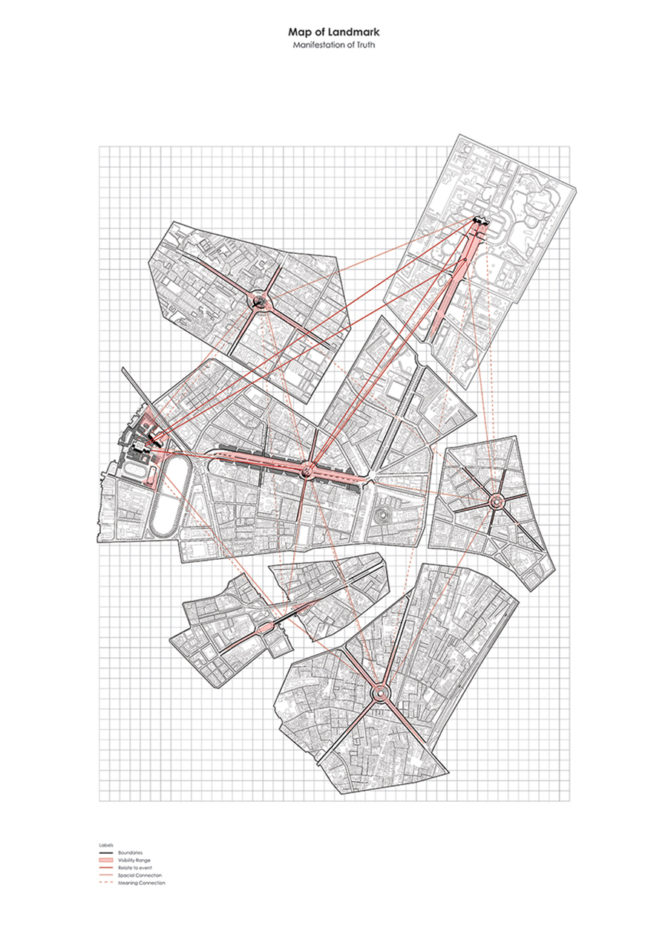 Landmarks of Bangkok are mostly a combination of utilitary usage and political gesture, mapped landmarks in Bangkok and defining the spatial and connotation relationship between each of them. 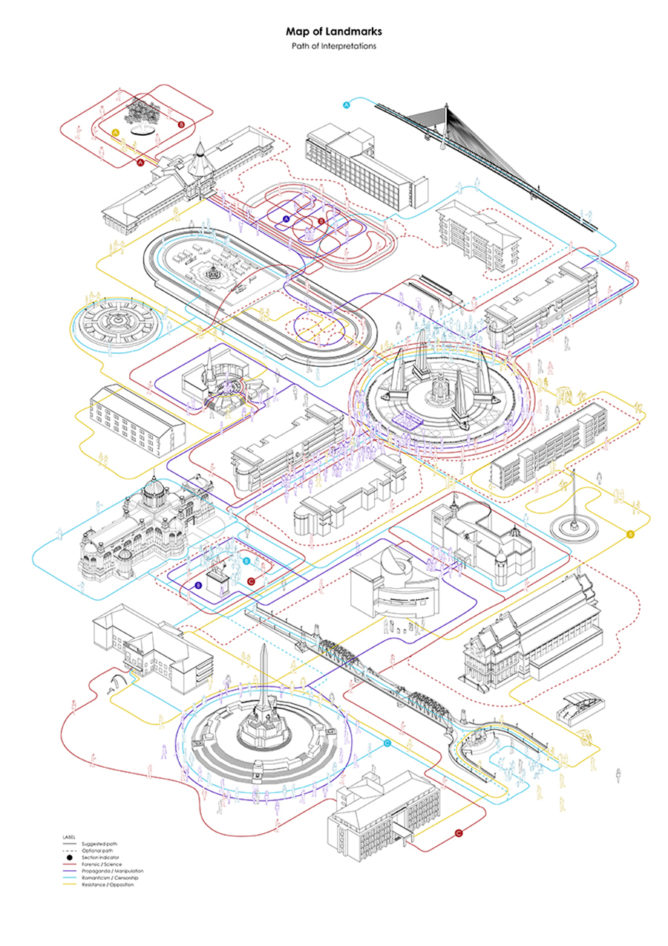 Map of Landmarks: Path of interpretation

In which it has shaped the decision to construct different options of paths according to different theme of interpretation. In this parade, we have 4 theme in total
● Forensic/science
● Propaganda/manipulation
● Romanticism/censorship
● Resistance/opposition 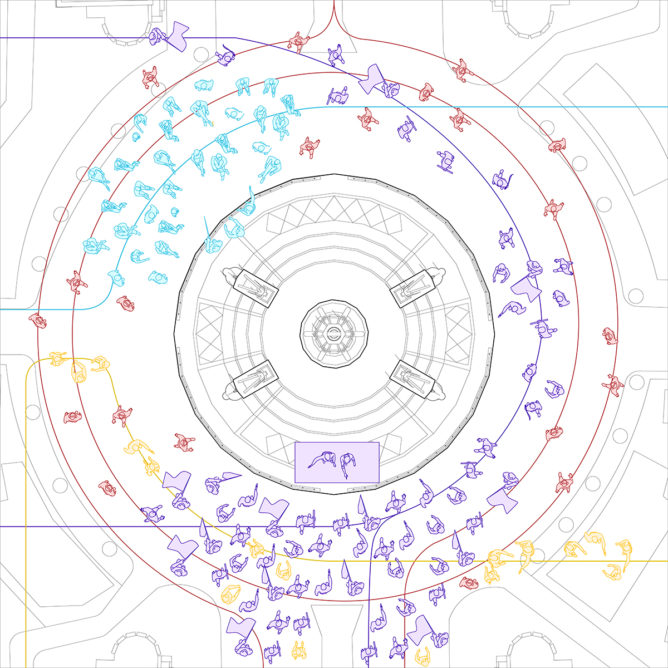 In the axon a Simulation of scenarios that would be happening in each theme of the parade. I will be focusing on the most concentrated area where most paths intersected, which is the democracy monument. 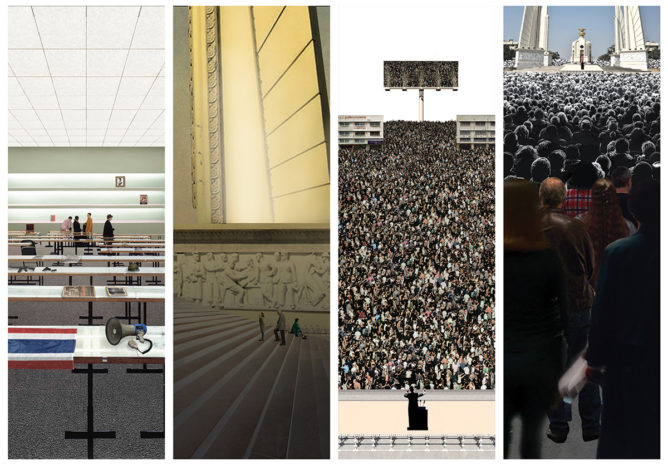 The most important part to curate them is how you construct the narrative and tell the story.
The Tableau is an atmospheric depiction of each theme. Tableau has a clear structure of a type of narrative and a protagonist, and the reinterpreted version of spatial representation.

Forensic: Forensic are facts that require anonymous narrations, the neutral-ness of the space is a reverted symbolism of a forensic interpretation of the monument.

Romanticism: Anthem or a song can be used to glorify, Depicting the notion of monumentality through scale, and the exaggeration of lights and gradients of darkness

Propaganda: A speech is best used to manipulate people and make them believe. This staged tribune, with the billboard at the back signifies a forged extension of a falsified crowd.

Resistant: An underground movement by exchanging through invisible networks such as social media. The image portrays the protagonist in a crowd, the feeling of resistance developed through pressure from the social density of gathering.

I’ve put together a documentary of site inspection of the ratchadamnoen area and conducted a few interviews of actual witnesses, current academic and also normal civilians around the context.

The 2nd experiment is by applying the same model onto an urban context.

I restaged the timeline of the protest in this forensic timeline diagram, to track down the locations and moments of exchange between characters, to observe the effect of this event from the actual date of protest to contemporary days.