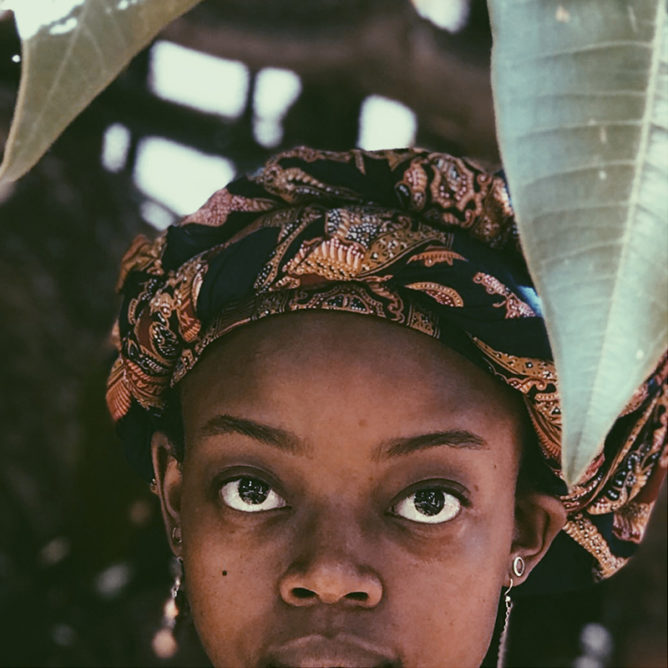 Miliswa Ndziba is a South African student currently in Unit 19 at the University of Johannesburg’s Graduate School of Architecture. For her thesis, she is designing a series of paper toys that make concepts of colonial and Apartheid spatial planning accessible to children. In the final year of her undergraduate studies at the University of Pretoria she interned at 1to1 – Agency of Engagement, an NPO that facilitates spatial design strategies through critical engagement with residents in poor unsafe areas of South Africa. During her time at the organisation, she was presented with the opportunity to present her research at Backstory, which was an urban story-collecting/sharing project with the users, managers and makers of the city known as Jo’burg. Her research project, Toolbox, engaged grade 3 learners at Jeppe Park Primary School to develop an educational tool that makes use of story-telling, mapping and 3-d modeling to nurture spatial literacy in children.

Project /// The Imagination Station: An Exploration of Miniature Realities Through Toys

Architecture has been used to socially engineer the rituals of performance that exist in current day South Africa. Aiding this, toys have been used (as a tool of engineering) to reinforce this architecture in the imagination of the youth. The study seeks to explore how rituals of performance that are embedded as a collective consciousness during childhood have facilitated the sustained production of erasure of black people in South Africa.

Set in the author’s childhood bedroom as a playscape, The Imagination Station is an educational children’s television program that frames the exploration of miniature realities that exist in current day South Africa, through toys.

The work is set in three time periods, namely: colonial South Africa, Apartheid South Africa and present-day South Africa. The author will contextualize their family’s history in the greater South African context in all three time periods in the form of a memoir. The point of departure is the PAC Treason Trial in 1960, Apartheid South Africa. The central figure is the author’s paternal grandfather, Rosette Ndziba, who was a defendant in the trial. The work references the court transcripts from the trial to frame the narrative. The author will set the scene in the historic centre of Pretoria, Church Square. The PAC Treason Trial (1960), which served as a ritual for the production of erasure, is transported from the Johannesburg Central Magistrate’s Court (PAC Treason Trial, [1960]) to the Palace of Justice, adjacent to the square. This container, and the rituals that it housed, were concealed and buried deep within the collective unconsciousness of the South African people.

The collection of toys is presented as a series of fun activities with corresponding instructions that employ alternative ways of seeing South African spatial history such as a paper theatre, colour-by-number triptych and dollhouse. The activities are performed by child actors on the educational children’s television program and the presentation of the information will reference Once Upon a Time (Weinstein, 2005) for effective methods of imparting information to children. Paper craft engages the child from the assemblage of toys to the performance of the activity. This process will assist the young viewers to understand the concept of world-building.

The Mephisto Waltz is a colour-by-number triptych, that uses the story of The Mephisto Waltz from Faust by Nikolaus Lenou to encode the choreographies present in Church Square, Pretoria. Colour is used to symbolize the different dancers in Church Square, namely British Imperialists, Afrikaner Nationalists and indigenous South Africans who are a subversive element to the dance. The story, which is told in three parts, has a twist to it. A subversive element is introduced to Lenau’s narrative.

Named for Kazuo Ishihuro’s novel, The Buried Giant, is a dollhouse that grows with a child from preschool to matric. The dollhouse encodes two Treason Trials (1956-1961) in South Africa, in a story about a dragon that has been enchanted to breathe a Mist of Forgetfulness over the PAC Treason Trial (1960) that is buried underground. This condition is juxtaposed with the highly publicized Rivonia Trial (1963-1964) that takes place above ground in the Palace of Justice. The child’s interaction with this narrative begins with a “don’t touch” rule, and ends with the dismantling of the dollhouse in their adolescent years. 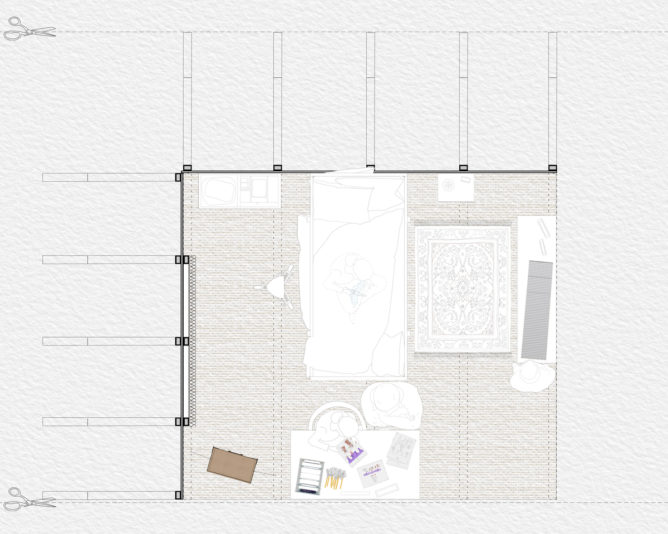 A floor plan of the set of the author’s childhood bedroom on The Imagination Station educational children’s television program.

The child actor who performs the aesthetics of play for the child viewer takes their cue from the scripts or instructions that accompany each toy. The playscape frames the codes of engagement, and serves as an additional layer of prescription for the viewer. The floor plan delineates the ways in which the child and parent actors engage with each toy in the playscape. 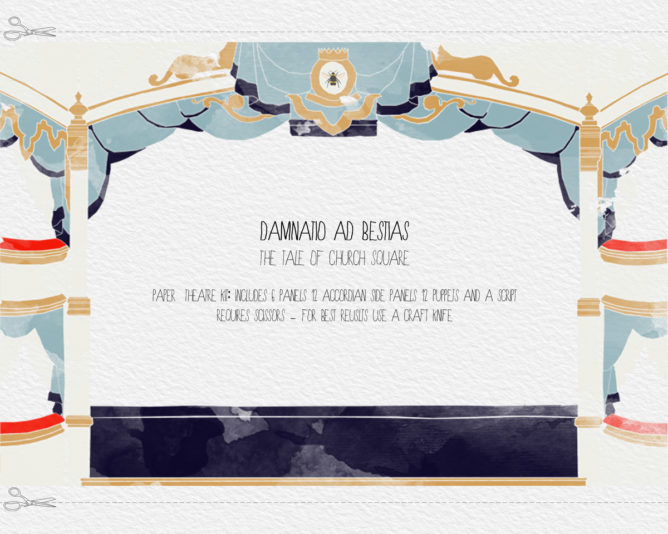 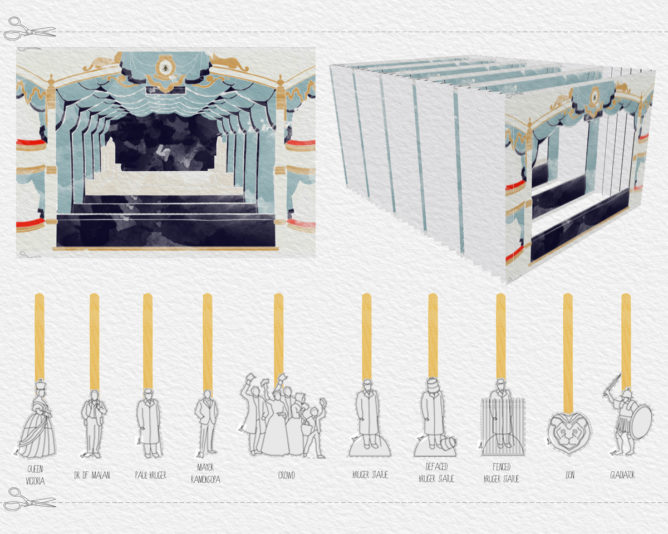 The paper theatre depicts Church Square and the accompanying puppets are of historical figures that are integral to the narrative of the history of Church Square. 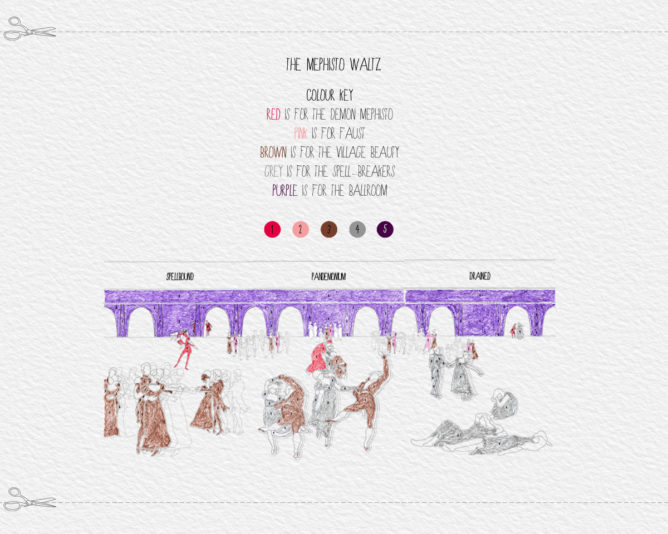 The narrative of the dollhouse is contained in a replica of the Palace of Justice. The components of the dollhouse are packaged in its corrugated cardboard shell. The package is presented to the child actor and the parent actor. 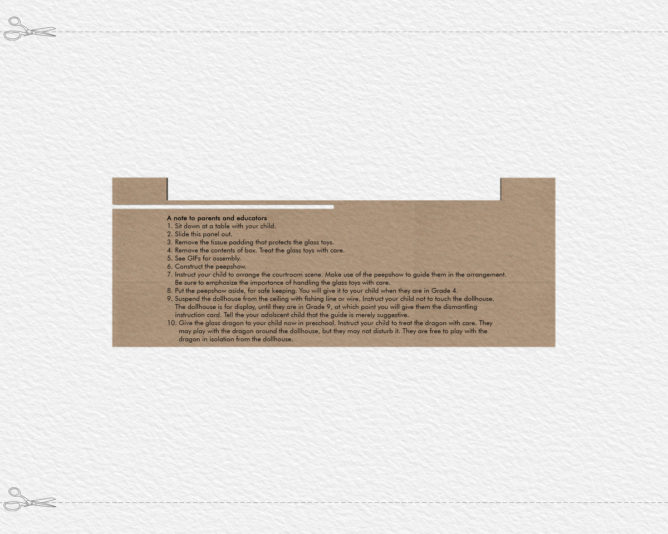 The Buried Giant dollhouse assembly instructions for parents and educators.

A note to the parent is presented on the back lid of the package. The parent actor who performs the instructions relays the information to the child actor. 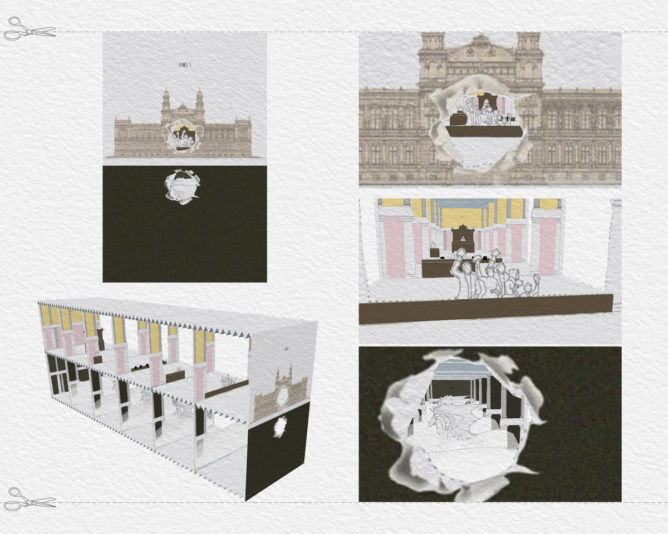 The stratification of the spatial condition of the two trials on 2-dimensional planes in the peepshow is used as a guide in the arrangement of the courtroom scene in the dollhouse. The peepshow is reintroduced to the child in Grade 4. It essentialises the two trials. The above ground scene depicts Nelson Mandela on Trial. While he was not the only defendant in the trial, he is the figure that the narrative revolves around. The below ground scene depicts the dragon surrounded by a shroud of Mist. It reveals the role of the dragon (that the child has been playing with since preschool). 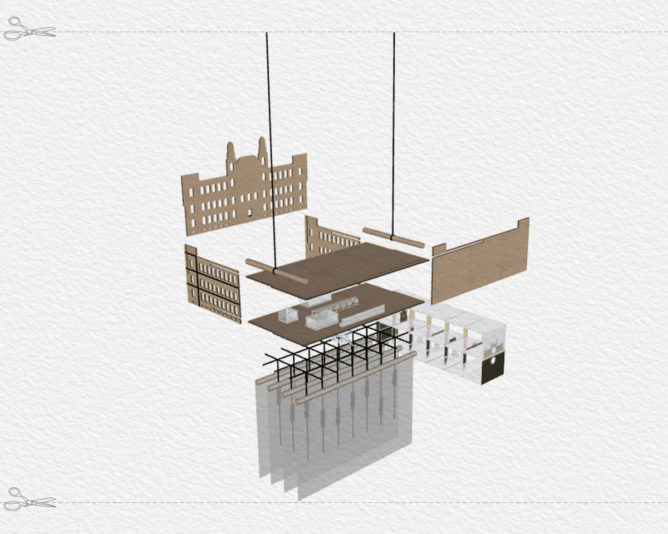 Arranging the courtroom is the only part of the assembly process that the child is involved in. At this point the parent or educator begins to plant the idea of being delicate with Rainbow Nation narrative. The components of the courtroom scene, like the dragon, are made of glass. While the dragon is the only aspect of free-play in the model, the courtroom scene is displayed and not played with (similarly to the way a china-doll is).

The PAC Treason Trial is represented in the model by wire dolls of the 23 defendants, one of whom is my grandfather. Whereas the Rivonia trial scene has a single doll of Nelson Mandela, all the defendants of the PAC Treason look exactly the same. This speaks to the erasure of their identities in the court transcripts, where they are referred to by numbers. Each defendant is fixed (smoldered) to a wire rod in a grid pattern. The rods, which don’t touch, are a commentary on how the PAC Treason Trial was used to disrupt the rhythm of the Pan Africanist movement in favour of “Rainbowism” in Apartheid South Africa. The scene is veiled by sheets of translucent paper. This Mist that the child first encounters in the peepshow in Grade 4 shrouds the condition of trial. To quote The Buried Giant, the dragon was deliberately enchanted by Merlin in order to perform her ordained task, so “the bones [of war would] lie sheltered under a pleasant green carpet… long enough for old wounds to heal forever and an eternal peace to hold.” So long as the dragon has “breath left, she does her duty.” 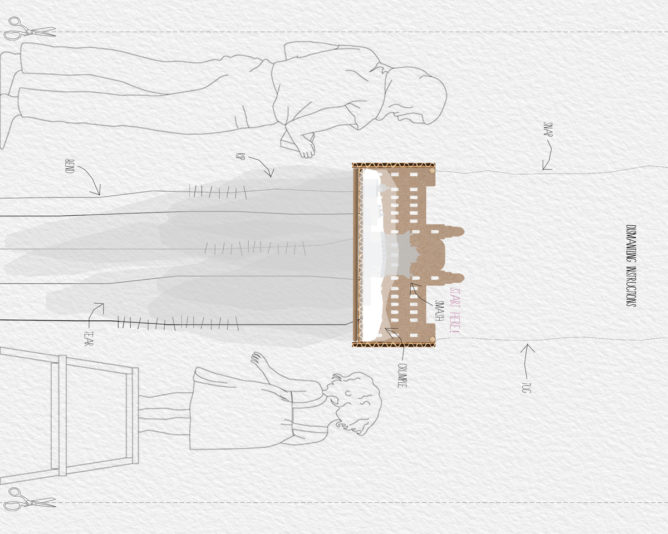 In Grade 9 the child is presented with a dismantling instructional diagram. The labels suggest ways in which the child can begin to deconstruct the narrative. Until this point the model has only been for display, and there has been an emphasis on treating the glass toys with care. When the glass dragon is smashed along with the glass mise en scene in the Palace of Justice, the enchantment breaks. After the obliteration of the most fragile components, the child may be less precious about tearing down the rest of the dollhouse that they have been conditioned to treat with care. The child is now an active participant in the process of demystifying the narrative. As a consequence of free-play, there is a chance that the child may break the glass dragon, before Grade 9. This may reveal to the child early on how easily the dragon can be slayed.