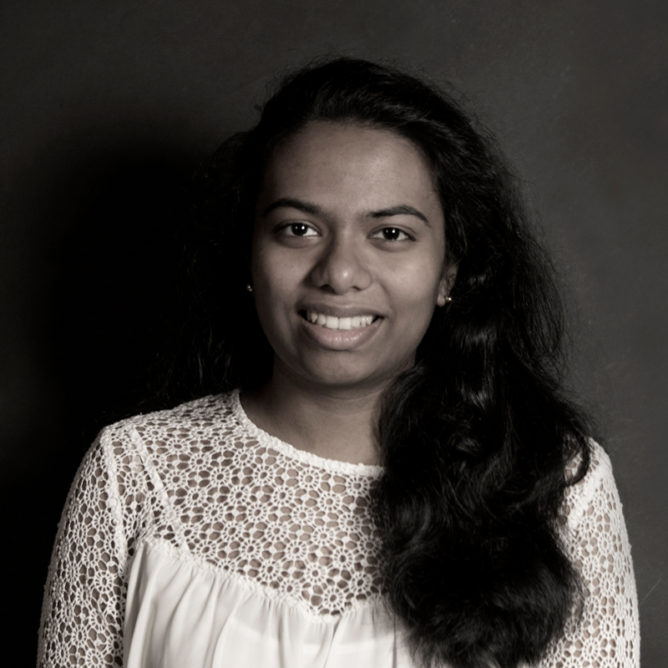 Uthra Varghese is an architectural designer and researcher who practices in Dubai and New York. She holds a Bachelor’s degree in Architecture from the American University of Sharjah and recently graduated from Columbia University with an M.S. in Advanced Architectural Design. Her keen interest in historical research inspires and drives her design methodology. She co-founded UT- r studio with Tasnim Tinawi in 2016; the practice investigates the multitudes in which design can elevate the relationships between cultural contexts and the built environment. The studio integrates work across the disciplines of architecture, art, installation and product design. The Funambulist thanks Mabel O. Wilson for recommending her work to us!

The intervention activates both invasive and poisonous species found on site through digital and physical networks to dismantle Rockefeller Jr.’s icon and establish nature cultures. Fort Tryon Park in Manhattan includes among other things; a heather garden, poisonous plants and the MET Cloisters museum, which the project will demolish. The site has been colonized politically through invasions, symbolically through the MET Cloisters museum and ecologically through the nonnative gardens, making it an imperialist archive. The project decolonizes the site by putting to work the capacities of the invasive heather plant and the poisonous plants. The Cloisters is broken down through micro explosions created by heating the excess gas of the poisonous plants. In order to determine the activation timeline, the project aims to handover the responsibility of the breakdown of the building to Rockefeller’s oil empire; as fracking increases, micro-demolitions in the museum walls are activated. 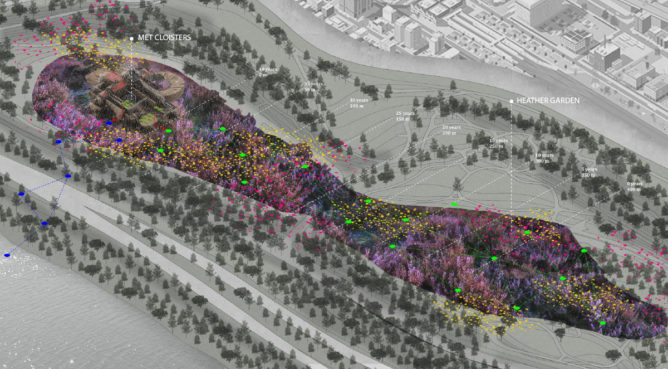 Fort Tryon Park has been colonized by multiple powers throughout history. It was originally inhabited by the Lenape nation who were driven out by Dutch invaders and then taken over by the British army. The land was finally won in battle by the Americans after the US independence. The property was purchased by Rockefeller Jr. in 1917. He employed the Olmstead brothers to design a park and then gifted it to the state of New York.

The MET Cloisters is an exhibit of cultural, architectural and ecological extractions. It is a unique space where architecture and plants are both exotic to their contexts. Within the gardens of the cloisters, there are exotic species of poisonous plants that are brought in from all around the globe. One of them is Oleander, which releases excess nitrogen gas as a defense mechanism. The heather garden is another site of exotic species in the park. It takes over surrounding lands due to its large seed and pollen count. As it increases in quantity, it attracts large amounts of bees and butterflies. 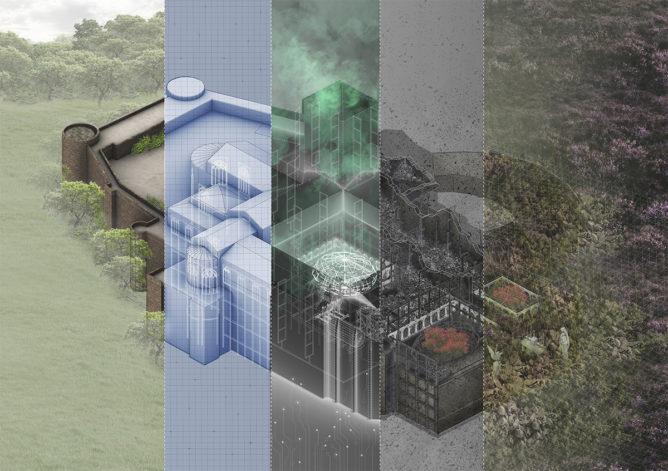 The project focuses on extraction of exoticism and its naturalization as native. It decolonizes the site by dismantling Rockefeller’s vision. This is done by putting to work the capacities of the invasive and poisonous plants by creating nature-cultures. To do that, the MET Cloisters is broken down through micro-explosions. Poisonous plants are enclosed and their excess gas is collected, heated and pumped through pipes. The result is the breakdown of the building. The invasion is facilitated by a mesh that directs the heather’s growth. It extends from the garden and envelopes the MET Cloisters. A network of wireless sensors and an irrigation system enrich the soil for the heather’s growth.

In order to determine the activation timeline, Rockefeller’s Empire must be revisited. Standard Oil’s monopoly was split up into smaller sectors that still function today. The Marcellus Shale supplies oil to New York City where Exxonmobil and Chevron, both descendants of Rockefeller’s monopoly are fracking in that area. Not only are they continuing extraction practices, but they’re also leading to an increase in earthquakes, water pollution and poor air quality. Therefore, as the fracking continues so does the demolition. The agents on site are activated to allow for an ecosystem that would synthesize the nativity and exoticism of both culture and ecology to eliminate Rockefeller from the landscape.

As architecture students and art history enthusiasts, we began analyzing and re-interpreting the art we so admired. We sought to see ourselves represented in iconic Western art and this sparked a series of Renaissance reenactments that included Da Vinci’s Last Supper, Masaccio’s Tribute Money and Raphael’s School of Athens. The overarching themes of our recreations are to re-consider the rather limited representation, per today’s context, in celebrated work from the past and to spark conversation about the accepted conventions of portrayed figures. 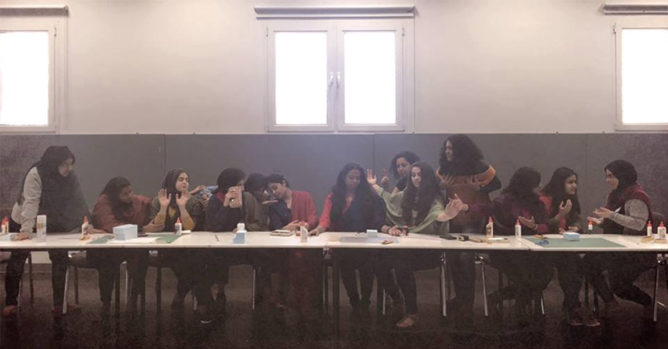 Our work pays homage to the masters by re-imagining their artwork and re-positioning them in this place, day and age. The reenactments of these paintings explore multiple themes with a primary focus on the re-gendering of a conventionally male-dominated ensemble. The figures in the painting have also been re-represented in terms of regional and religious diversity. To make it more culturally specific, we re-costumed the figures using traditional attire such as sarees and shaylas. 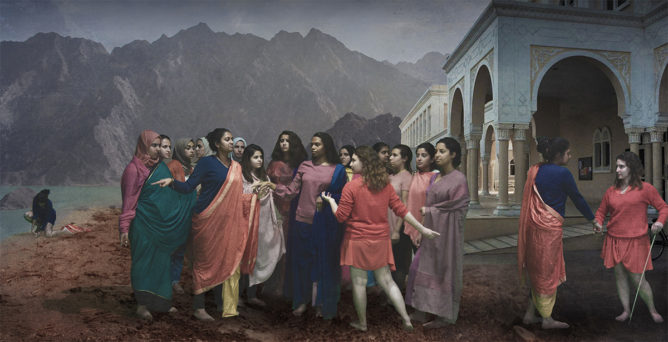 We shot the recreations on campus, after draping the cast and directing their positions for a single photograph. Finally we knitted together all the visual elements using Photoshop to form the final composition. As much as the reenactments were about generating significant images, we realized that the process itself created a sense of community that was more meaningful than the final result. It also perfectly captured the spirit of learning that is a core aspect of the studio environment, while bringing faculty and students together. 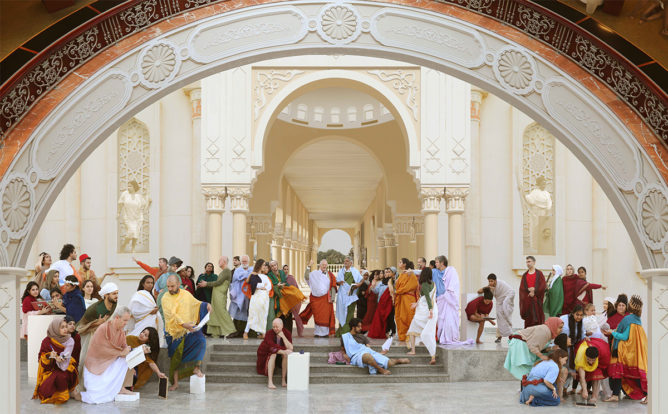