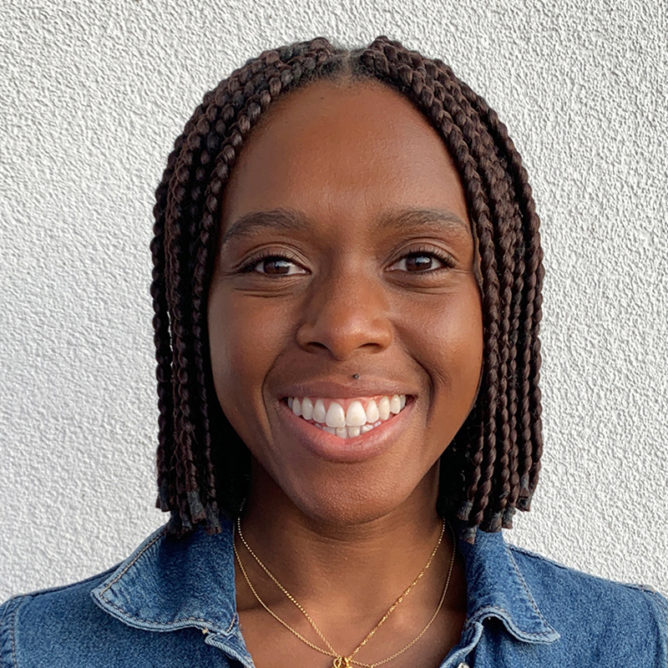 Folasade Okunribido is an architectural designer. After receiving her BSc in Architecture from the University of Bath, her 2020 graduate thesis project at the RCA earned her the School of Architecture Dean’s Prize for the innovative, rich and cohesive nature of the project that pushes the boundaries of the discipline. Her work explores new forms of inhabitation through the lens of traditional Yoruba Architecture. Folasade is currently an Architectural Assistant at AHMM Architects and part of a collective focussed on redefining, elevating and celebrate African History using illustrative narratives. The Funambulist thanks Thandi Loewenson and Elise Misao Hunchuck for recommending her work to us!

Ààfin Awon Eniyan (The People’s Palace) is a home for renegades, a group of 150 young people, who are breaking free from the expected traditional way of life in a space defined only by immersion in blue. The project provides a refuge, like the traditional Yoruba afin (palaces) (G.J.Afolabi Ojo, Yoruba Palaces, 1966). of the past, allowing these renegades to freely go about their daily lives. It provides space for resting, playing and working together. The building is situated in my mother’s home, Ibadan, Nigeria, overshadowing an area of 10,800m2 above the shallow Kudeti river, filling the largest void in the densely packed centre.

The building maintains the collective use of the afin’s untranslatable and characteristic àgbàlá (courtyard). However, the yara (rooms) are pushed to the extremities allowing the ọdẹdẹ (corridor) to flow in and out of the enclosed spaces, creating a complex of entanglements for special moments of interaction.

In traditional Yoruba society, the Oba’s (King) afin was a place of organised ceremony, debate, sanctity and a solace for the afflicted. In reclaiming the organisation and the traditional notion of the afin from an elite, for the benefit of the many, the project creates a backdrop for communities like the Alté, who celebrate the political edge that music and performance can play in its ability to bring people together. The perception of such communities is unstable and this characteristic is reflected in the building through the use of structural colour. In this project, the colour blue is as important to the architectural structure as a column, floorplate, load and mass.

Blue,
Universal and infinite,
The colour of the sky and the sea,
Which when reached cannot be touched,
And disappears when close.
Blue surrounds us constantly,
Shifting into different shades and hues.

Up until recently, in Yoruba, there was no word for blue. Like many languages, blue was one of the last colours to be described with words. Blue was unbound by language, thus possessing its own kind of freedom. Free from preconceptions, free from ideologies.

The building is composed of an abstract array of reinforced, interlocking clay plates. Each plate varies in size according to their structural (including colour) performance and requirements. Each clay plate is treated with mica powder which creates structural colour through the phenomenon of light interference. Outside, the blue is elusive, leaving the largest handmade clay elements rough to match the terrain of the city. Moving deeper into the building the colours shift and intensify. And at the centre, which holds a place for those most marginalised, a collective space opens up to a vivid fluctuating blue. The building provides multiple forms of inhabiting a structural blue, where shifting shades permeate through yara and ọdẹdẹ allowing everyday acts to be reframed by the oscillation of colour, only opening at the àgbàlá for an uninterrupted view to the blues of the sky.

The project was a pathway to understand a new form of inhabitation through the lens of Yoruba afin architecture, a spatial definition that is not commonly used in Nigeria today but became essential to the project.  I do not romanticise the traditional afin and the building translates a sequence of spaces for an elite into one which celebrates a common – whilst adopting the colour blue to evoke a sense of freedom. Within Ààfin Awon Eniyan, an amalgamation of elements with an oscillating presence on the site, provide shelter through the yara, ọdẹdẹ and the main àgbàlá. In openings small and delicate and courtyards which engulf the collective, a deep sapphire blue flickers where those who could not find their place are free. 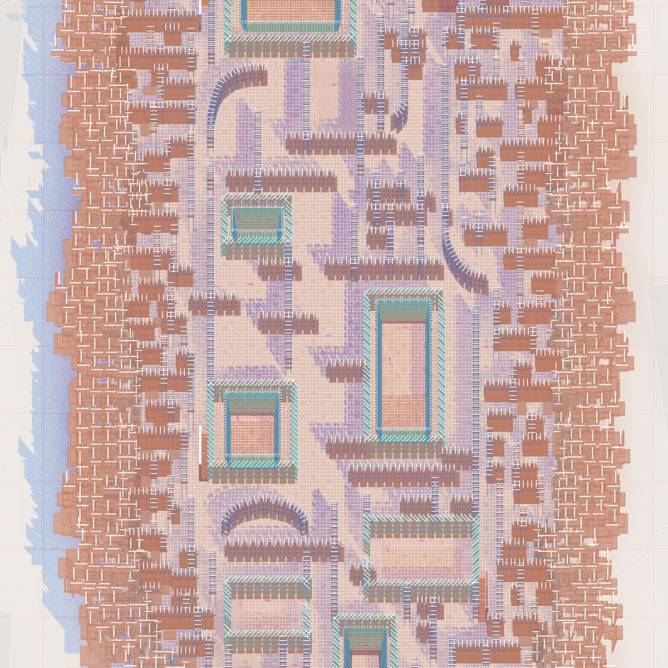 First Floor Plan – Upper levels can be accessed and used by many within the community, subverting the tradition that only the Oba would have a room above one storey. On the first floor, plates surrounding the yara are continuous, large and more dense for increased privacy, separation, and reduced light. 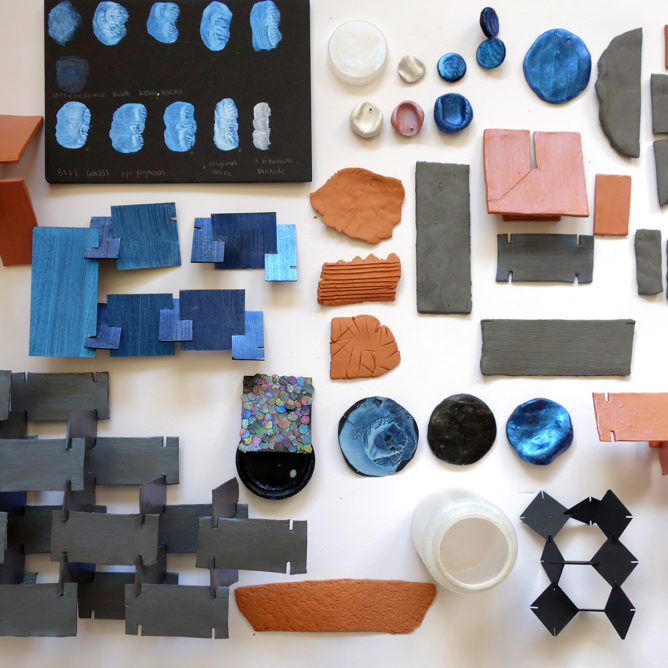 Material tests – The project uses blue as an aura in the form of structural colour, a phenomenon that occurs when light interferes and diffracts through periodic nanostructures, causing the appearance of bright shifting colours. Similar to the wings of a morpho butterfly, the clay plates of the building are embedded with a translucent mica powder medium, which allows each plate to manipulate light causing the reflection of a range of colours. The base colour for mica powder of 450nm is blue and its intensity varies depending on two factors; the background colour and the angle of the light. 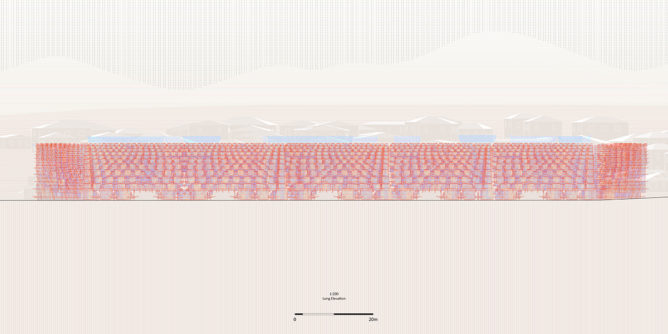 Long Elevation – Similar to the traditional afin, the rhythmic layering of the clay plates expresses vastness and rigour, yet the building is not solid, it is entirely exposed to the outside, with only a series of elements creating a distance. 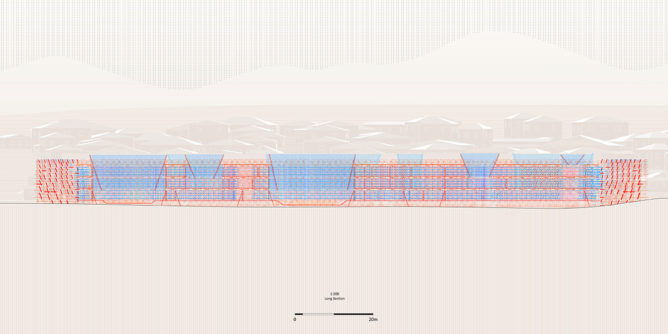 Long Section – The three equal single storey levels, lightly hold the centralised àgbàlá which are non-hierarchical in their layout. The building provides multiple forms of inhabiting a structural blue, where shifting shades permeate through yara and ọdẹdẹ allowing everyday acts to be reframed by the oscillation of colour, only opening at the àgbàlá for an uninterrupted view to the blues of the sky. 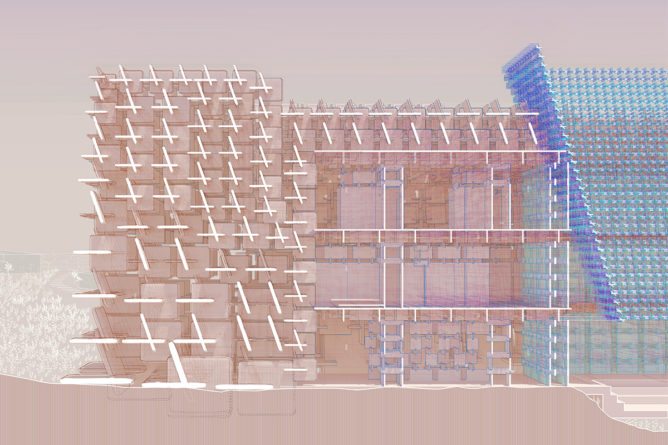 Periphery perspective section – The clay plates decrease in scale vertically and horizontally, with the internal façade remaining constant. On the periphery, the floor tiles are laid directly along the ground, and small intimate spaces, back a thin layer of elements which provide screening and protection from the outside, whilst still allowing those near to hear children pottering around the river and feel the gentle breeze. Here, yara are enclosed yet never quite closed off to the rest of the building, leaving gaps for others to both see and enter in. 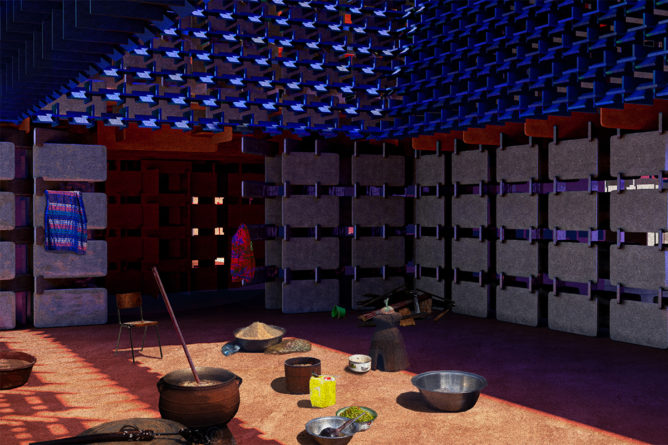 Cooking in the àgbàlá – The àgbàlá – a space for everyday acts such as cooking and eating, where the traditional communal culture and edgy character of those living within the building meet. 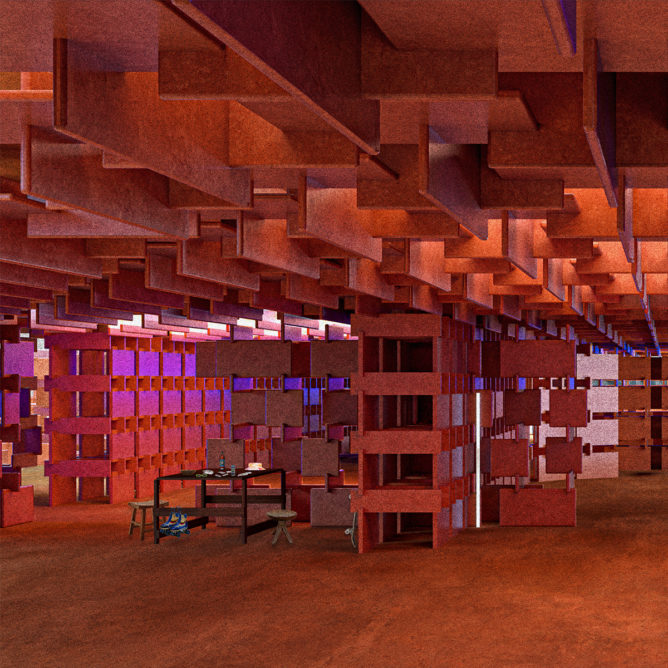 A view through an ọdẹdẹ – Moving deeper into the intersections, the blue intensifies and the plates link to form pockets. The colours are animated further with artificial light, constructing areas of intense saturation and glow. 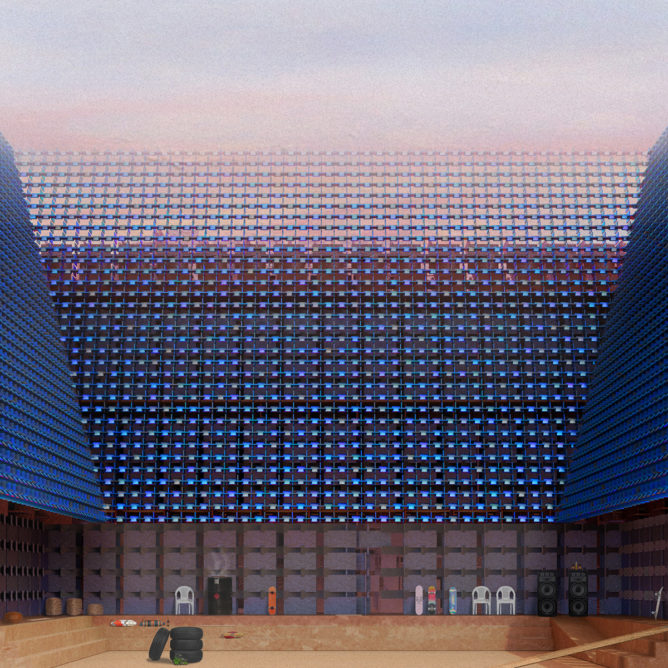 Skating in the main àgbàlá – The àgbàlá – with the most in intense blue, open and vast where the elements seem to merge into the sky, angled at 53 degrees allowing the vibrancy of colour and continuous screening to shield the community within the city.