Arinjoy Sen is currently a student of M.Arch architecture at the Bartlett School of Architecture, UCL in London. His focus ranges from the politics and aesthetics of architecture/space to the instrumentalization of spatial agents in socio-cultural and political phenomena. In the last academic year (2019-20), Arinjoy’s work focused firstly on critically relevant political events and conditions within the Indian political landscape, namely the ongoing socio-political crisis within the highly conflicted and militarized region of Kashmir. Secondly, his research worked towards the demystification of a specific politico-religious movement – the Ram Janmabhumi Movement – through the spatial agents instrumentalized within it. Previous explorations include penetrating the realm of capitalism through architectural discourse, namely a critique of capitalist development through the lens of post-Operaist thought process. Drawing plays a crucial role in Arinjoy’s work, where it becomes an apparatus and alternative space for the exploration and subsequent projection of thought processes and architectural discourse. Current research occupations include subaltern studies – towards a deconstruction of architecture’s role within the realm of postcolonial discourse.

Architecture as a discipline situates itself at the locus of a complex and far-reaching network of agents, events and processes. This gives it a unique position or vantage point, which enables the discipline to have loose boundaries. Such a condition allows us to go beyond the intricacies of architecture’s-built manifestation and explore the deep, implicit or explicit, and complex historical, socio-cultural and political ramifications of architecture. Such a strain of thought brought about the agency to address and confront the political landscape of India, which is currently in crisis, through architectural discourse.

In recent times, especially in 2019, Kashmir was at the forefront of heated political debate. This was brought about by the Government of India’s abrupt decision to revoke the special status of Indian-Occupied-Kashmir, and subsequently its enforcement under dubious circumstances causing Kashmir to plunge into deep crisis. This is where ‘Productive Insurgence’ (2020) situates itself in order to address and confront this condition of deep political crisis and conflict. Historically, Kashmir has always had a complicated relationship with India and its neighbours, due to the nature of its inclusion within the State post-Independence. This allowed Kashmir to almost exist as a state of exception — with a special status in the form semi-autonomy. But following the revocation of its special status in August 2019, the people of Kashmir have been living in constant precarity, negotiating between death and democracy, the military and the militants, India and Pakistan – where the streets have become theatres of violence and the people at a loss of identity and choice.

Productive Insurgence as a project attempts to explore the possibility of a form of autonomy and self-determination within and against State-Capitalist systems while actively addressing the complex socio-political and cultural condition of crisis and aims to confront this state of helplessness – towards the possibility of emancipation. It questions the ways in which the people of Kashmir produce and reproduce themselves in order to create an apparatus for production and reproduction within Kashmir, towards a circular economy independent of State and Capitalist systems, for the sustenance and subsistence of the community in this struggle.

Through this exploration, the project attempts to address issues pertaining to identity politics, cultural narratives and socio-political conflicts along with the politics of environmental state-making. It intends to stretch the possibilities of regionalism, circular economy and the idea of common(s) and offer them as a radical alternative to current modes of production. A solution perhaps the world needs to start looking at right now, especially for conflicted territories like Kashmir. 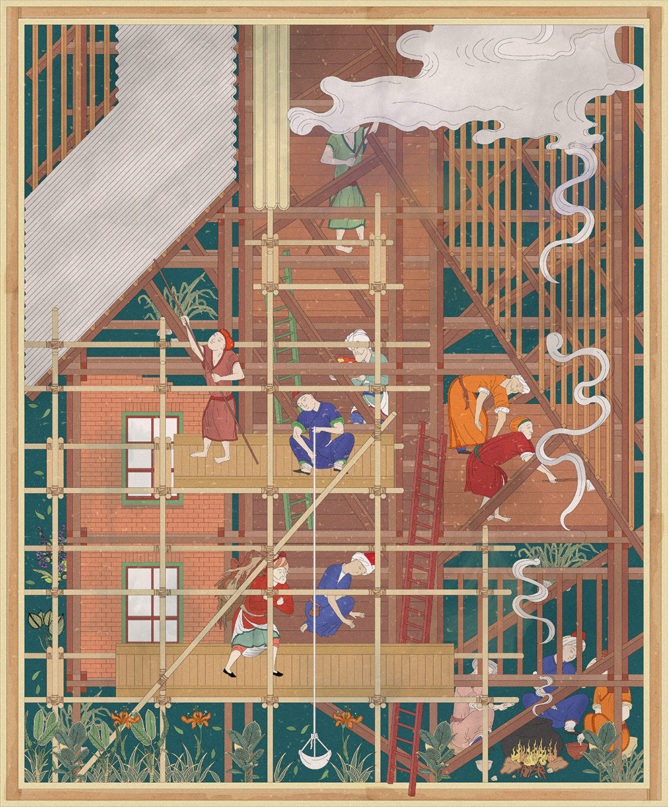 Maintenance as a Facilitator – the act of building and maintenance as practices towards the destabilisation of status quo and facilitation of circular economy. 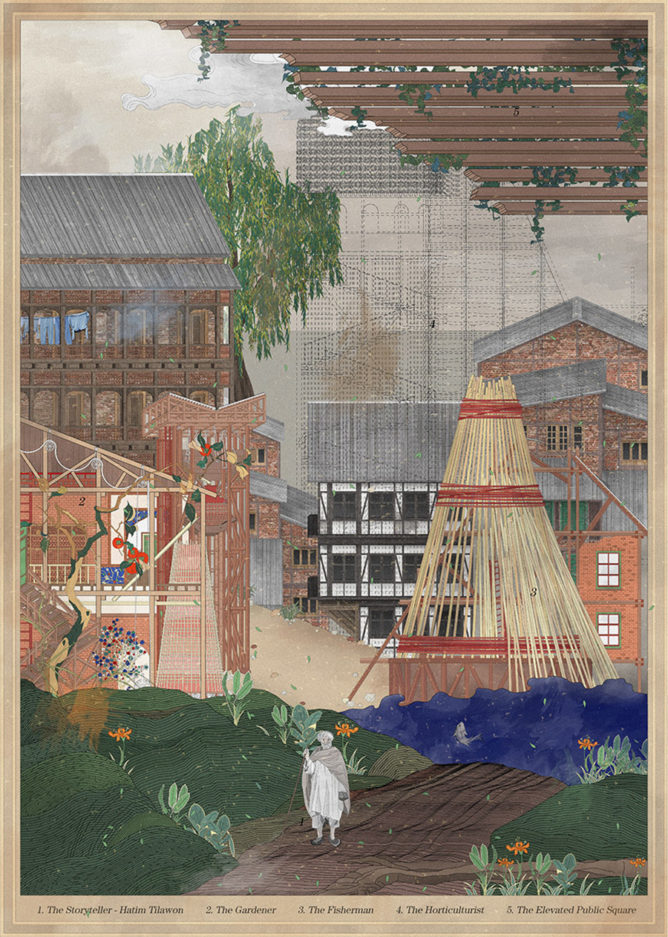 Narratives for a New Grammar – towards the construction of an identity rooted in struggle. 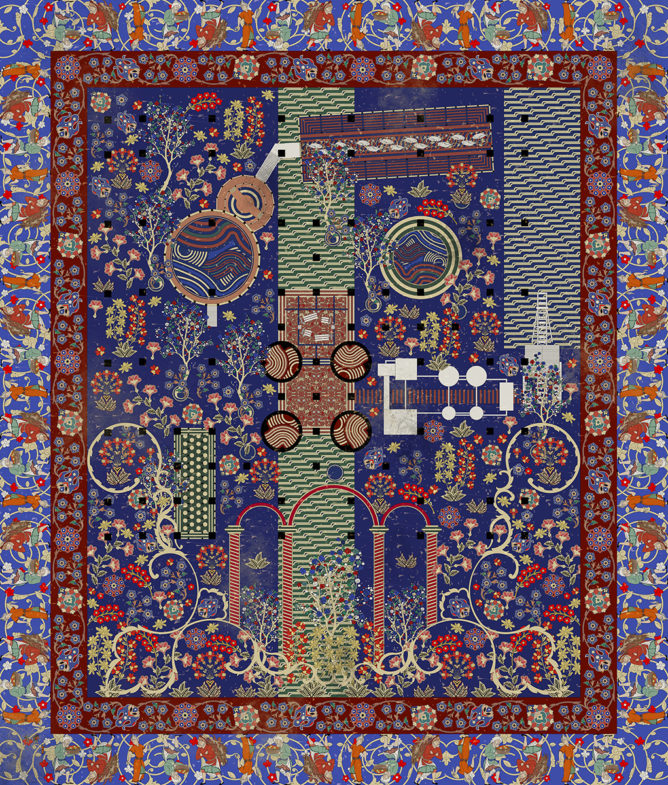 The Political Form of the Carpet as a Manifesto – towards an alternative space for reading and inhabitation. 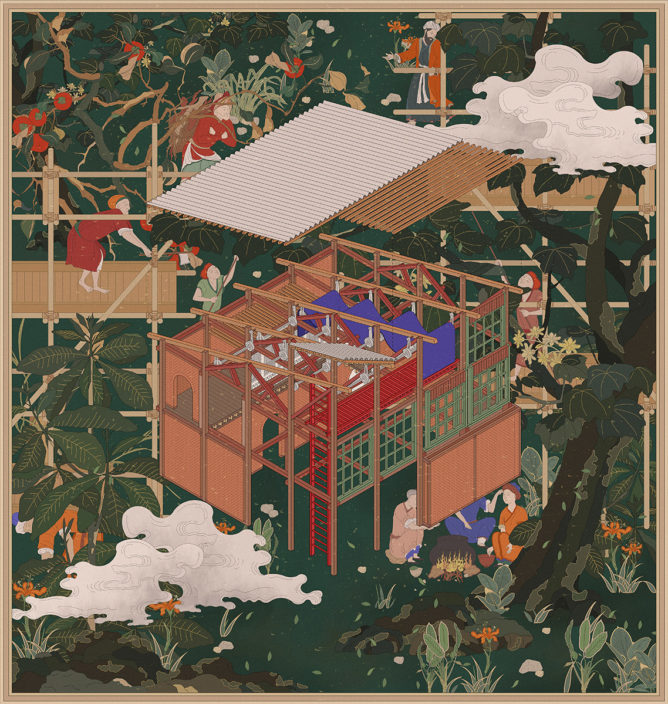 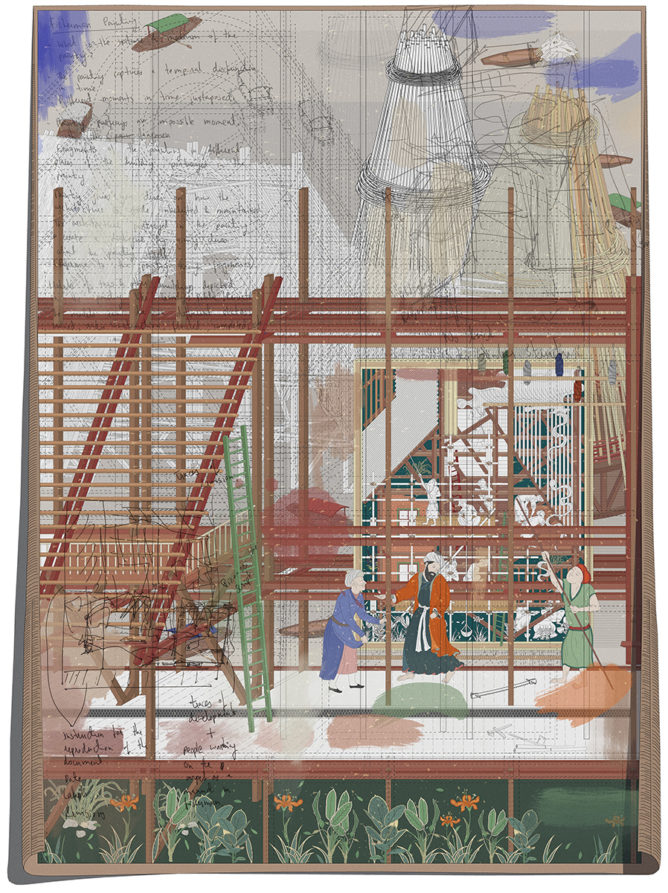 An Evolving Artefact – the painting as a manual towards the development of the project, the narrative and the construction of a history. 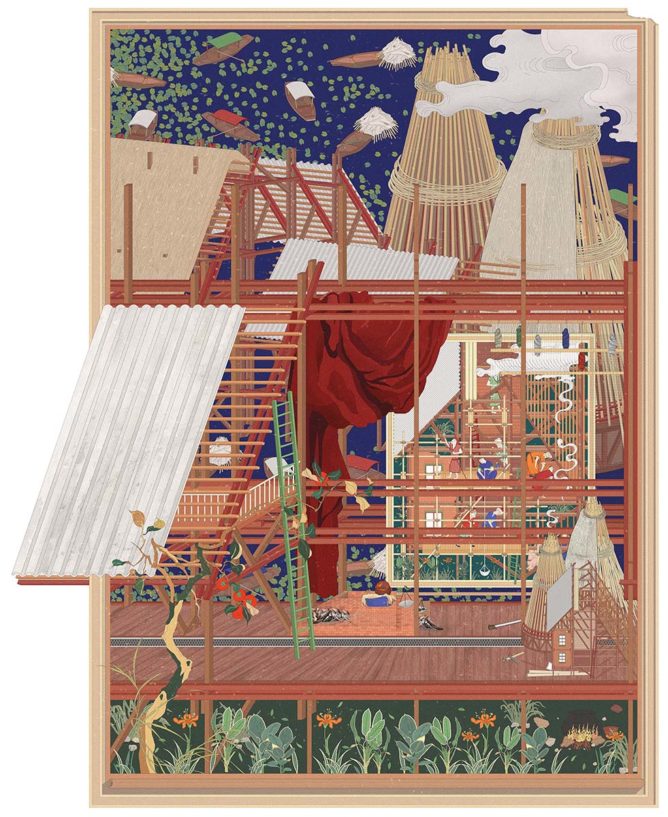 On the Margins of Utopia – the painting as an apparatus for the projection of ideologies for a future interwoven with the present, towards a construction of time.

Also defining the current political landscape of India is its Hindu nationalist right-wing government. The ideologies and agendas pertaining to this government can be argued, tend towards a neo-Fascist regime. It’s not difficult to see the overarching agenda – sometimes explicitly outlined – of this government through its recent enforcement and mobilisation of policies, policing and movements of subjugation, control and choreography – towards the construction of a specific historicity. Such a condition begs to trace the history and beginnings of Hindu nationalism in a secular India and its crucial turning point within the political landscape. This turning point was arguably, the Ram Janmabhumi Movement which took place in the late 80s extending onto the 90s, culminating into the demolition of the Babri Masjid, a 16th Century mosque. The event shocked the country and the rest of the world, culminating in vast communal conflicts throughout the country, and subsequently cementing the position of Hindu nationalists in the political landscape of India.

‘Spatialising Conflict’ (2020) attempts to demystify the event through the examination and deconstruction of the instrumentalisation of spatial agents within the event. The research argues that examining the spatial dimensions of the sites and events within the Ram Janmabhumi movement will allow for understanding the role of spatial agents in the politics of orchestration, production and proliferation of conflict. This should have wider implications on the instrumentalization of space in the politics of communalism, religious nationalism and mass mobilisation as well as its role as a social agent.

Such are the topics and fields of interest that occupy Arinjoy’s work at the Bartlett School of Architecture. The nature of the work briefly introduced above embrace the loose boundaries of architectural discourse in an attempt to confront the wider socio-cultural and political implications of the discipline – towards the creation of an agency to critically address and practice architecture. 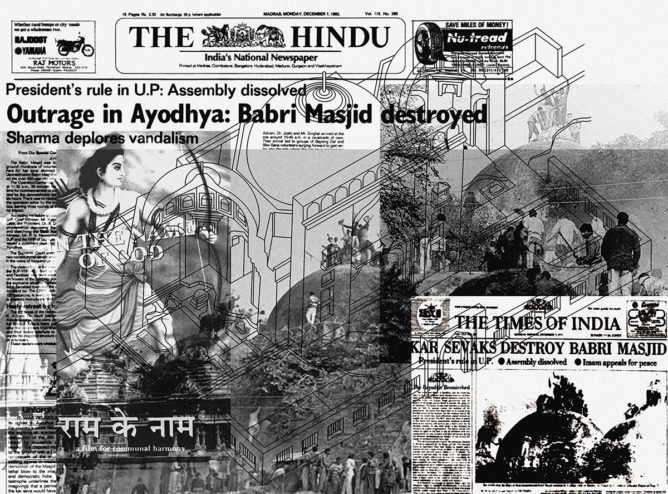 Spatialising Conflict – Decoding the instrumentalization of space in the Ram Janmabhumi Movement, India