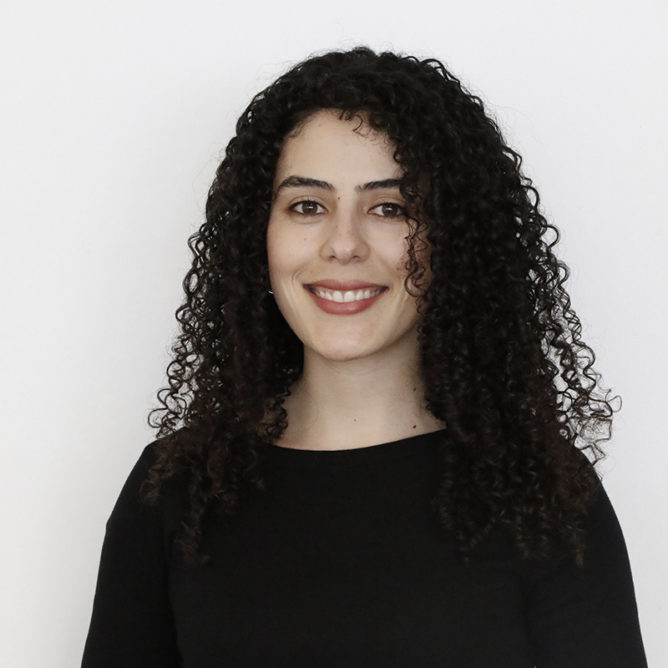 Rula Zuhour is an architectural designer based in Chicago. Shas practiced independently and in offices of various sizes both in the United States and Palestine. She is a recent graduate from the M.Arch program at School of the Art Institute of Chicago and holds a B.S. in Architecture from Birzeit University in Palestine. As a graduate student, she was awarded the Pritzker Graduate Fellowship, the first prize of the Gensler Diversity Scholarship, and the Schiff Foundation Fellowship for Architecture. A big thanks to Mas Context for making us aware of Rula’s work.

My practice lies at the intersection of architecture, landscape, and urbanism. Through investigation and narration, my work engages wider socio-economic, ecological, and political contexts. I am interested in using design as a tool to question existing power structures and propose new realities.

This work is my Master of Architecture thesis project completed at the School of the Art Institute of Chicago in May 2020. The thesis, developed over two semesters, has received the 2020 Schiff Foundation Fellowship for Architecture and was published in MAS Context. It examines the relationship between policy and space in the neighborhood of Kafr Aqab at the edge of East Jerusalem- investigating decades of Israeli policies and practices that have shaped the neighborhood, identifying key factors which have laid the groundwork for any future annexation or excision, and examining the stakes of each possible future.

Within Jerusalem’s city boundary but outside the Separation Wall, the neighborhood of Kafr Aqab is a ledge where Palestinian Jerusalemites resort to live. Behind them is a concrete wall sealing off a city that constantly pushes them out, and ahead of them is a downfall that renders them stateless. With the goal of achieving a 70% Jewish majority in Jerusalem, this lawless place emerges as yet another tool in the Israeli colonial project, which strategically expropriates as much land with as few Palestinians as possible.

In Kafr Aqab, time becomes irrelevant as Palestinians live in a state of limbo. Often compared to a refugee camp, its temporariness is served by permanent structures. But in this case, those structures are informal high-rise buildings, rising higher every day, with little infrastructure and no services. The future of this vertically growing density-like its emergence-is shaped by Israeli policies and practices.

This thesis investigates past and current Israeli colonization tactics that have created the Kafr Aqab phenomenon, where architecture and urban planning are instruments of dispossession, displacement, and control. The thesis uses both spatial and non-spatial information to identify colonial policies and territorial tactics that shaped the urban condition of Kafr Aqab. The spatial is reflected in the territorial representation of tactics including land expropriation, the declaration of state land and national parks, and the construction of military walls and checkpoints. The non-spatial is coded into the drawings, where it incorporates colonial systems and policies such as the Israeli ID system, Center of Life Policy, and Greater Jerusalem Bill. The spatialization of the history and the narrative exposes Israel’s strategic weaponizing of space in consolidation of disparity and control.

The thesis uses speculation to both orchestrate the unstated power of the political boundaries and military structures as well as reveal the stakes of possible future policies currently being considered by Israel in the Greater Jerusalem Bill. By examining moments in space and time of idiosyncratic collisions between the urban fabric, military structures, and political boundaries, the thesis reveals the method in which those territorial tools operate in tandem with oppressive legal, civilian, and administrative policies to expand Israel’s territory, while displacing and fragmenting Palestinian communities. 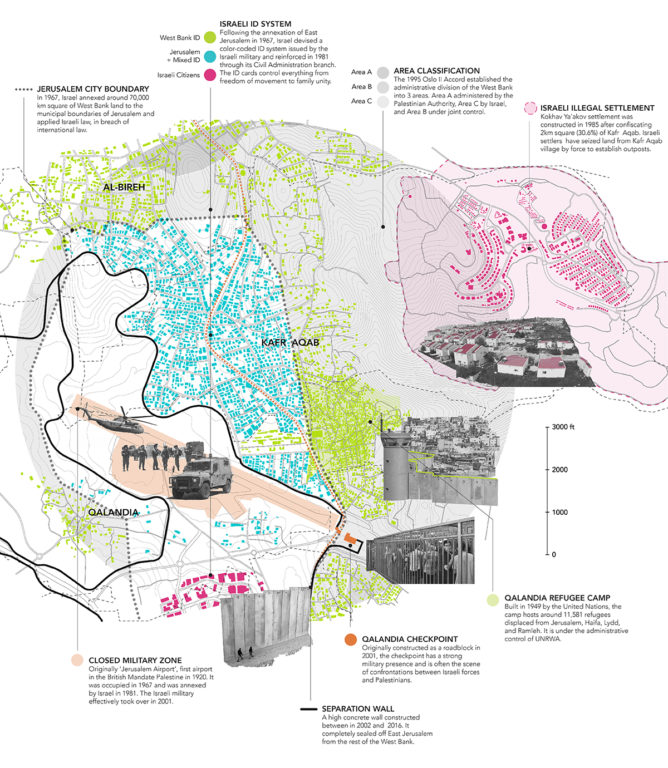 Despite the fact that Kafr Aqab is completely neglected by the city and is facing challenges of overpopulation, informal construction, and lack of law enforcement, infrastructure, and facilities, the densification process still persists. Palestinian Jerusalemites, especially younger adults, are still establishing their homes in Kafr Aqab. An estimate of one third of families residing in Kafr Aqab are made up of a Jerusalem ID holder married to a West Bank ID holder. Palestinians with West Bank IDs cannot live in Jerusalem while Palestinians with Jerusalem IDs absolutely must live within Jerusalem’s city boundary to maintain their residency status under the “Center of Life” law, making Kafr Aqab one of a couple of places they can be together.

Due to numerous colonial policies and tactics enacted by the Israeli government against Palestinians in Jerusalem, many Palestinian Jerusalemites find themselves lacking the means to establish a home in Jerusalem. Between the cost of living and salary gap between Palestinians and Jewish Israelis, Palestinian Jerusalemites increasingly find themselves not being able to afford to live in neighborhoods within the Separation Wall. Moreover, building permits are extremely expensive and limited to Palestinians by design due to city planning practices. And with them being forced to prove they reside within the city boundary of Jerusalem, they are forced to move to areas beyond the wall such as Kafr Aqab and Shufat Refugee Camp. 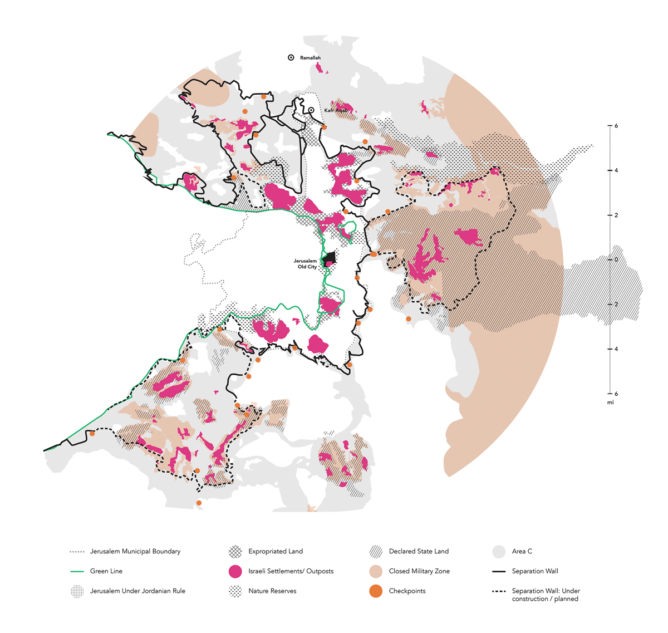 Colonization Apparatus: The Creation of the Kafr Aqab Phenomenon

The Kafr Aqab phenomenon is both a product and tool in the Israeli colonization project in Jerusalem. To fully understand the method in which it was created, one needs to both zoom out and go back in history to identify both policies and territorial tactics crafted to build this colonization apparatus.

Ever since Israel occupied the West Bank and annexed East Jerusalem in 1967, it has used various tactics to gain control over land and build as many Israeli settlements as possible. Those tactics include the outright forced expropriation of land, declaring nature reserves and national parks on false pretenses, using ancient Ottoman and British Mandate laws to declare state land, needlessly classifying areas as closed military zones, the construction of checkpoints restricting movement, and most infamously drawing the route of the Separation Wall so as to lay ground for annexing seventy illegal settlements in the West Bank. Meanwhile, Israel has also carried through demographic strategies that continuously replace Palestinians with Jews. Those strategies include the Law of return, the Gafni Commission, the “Center of Life” policy, the building permit regime and house demolitions, and the “Greater Jerusalem” bill. 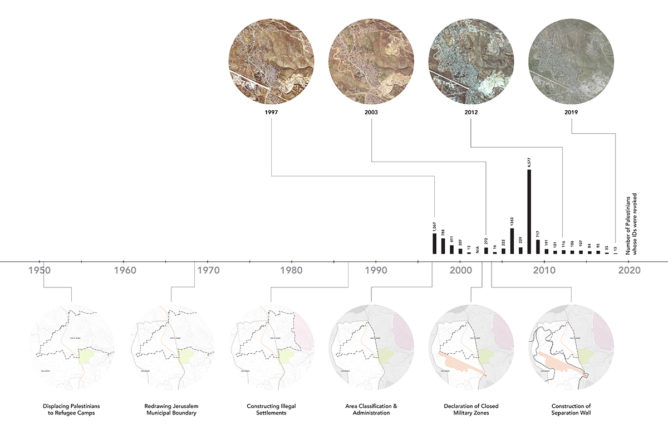 Examining the colonization apparatus at the Kafr Aqab scale, it is easy to see how Palestinians were slowly dispossessed of their land and left with that lawless ledge between the Wall and city boundary. The thick dash-dot line represents the accessible parts of the village to Palestinians, which has been shrinking dramatically due to the construction of the illegal Israeli Settlement Kokhav Ya’akov, Area C classification, and the construction of the Separation Wall. Prior to Kafr Aqab becoming a resort for Palestinian Jerusalemites seeking to preserve their residency status, the land used to be primarily agricultural. 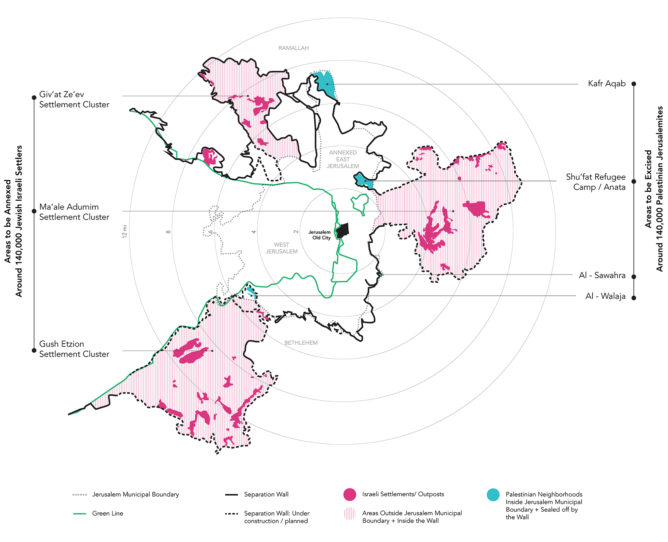 The speculation on future policies is based on a report done by Crisis Group, which investigates Israeli plans for Palestinian neighborhoods in East Jerusalem both inside and outside the Wall. It focuses on the Greater Jerusalem bill, drafted in 2007 and voted on but shelved in the Israeli Parliament after winning the support of Netanyahu in 2017 and a dispute over the excision of Palestinian neighborhoods that have been walled off. One of the bill’s goals is to swap the 140,000 Palestinian votes in municipal elections with 140,000 Jewish Israeli ones-known as ethnic gerrymandering. 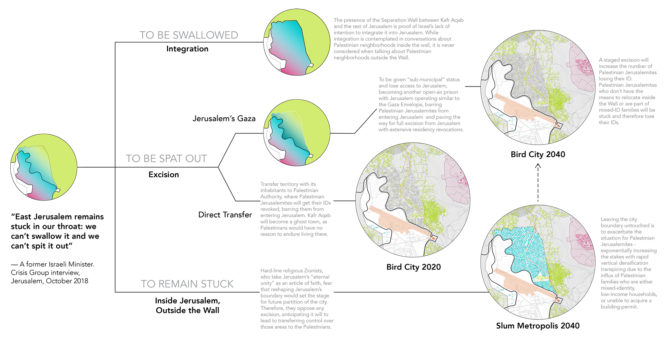 The Israeli attitude towards East Jerusalem can be summed up in the quote by a former Israeli Minister:

“East Jerusalem remains stuck in our throat: we can’t swallow it and we can’t spit it out.”

While this quote refers to East Jerusalem as a whole, it can be applied to the specific case of Kafr Aqab as follows:

For Kafr Aqab to be swallowed is to integrate it with “Unified Jerusalem”. To be spat out is to be excised from Jerusalem, which was proposed in two scenarios. And to remain stuck is for Kafr Aqab to stay inside the city boundary but outside the wall.

The two futures “Bird City” and “Slum Metropolis” are not separate, but rather feed off each other, raising the stakes every day. “Slum Metropolis” is a direct product of the current displacement of Palestinian Jerusalemites, and “Bird City” will be the second, if not the third time the very same communities are displaced. This vicious cycle is the very definition of the state of limbo Palestinians live in and is always coupled with the continuous expansion of Israeli territory and illegal settlements 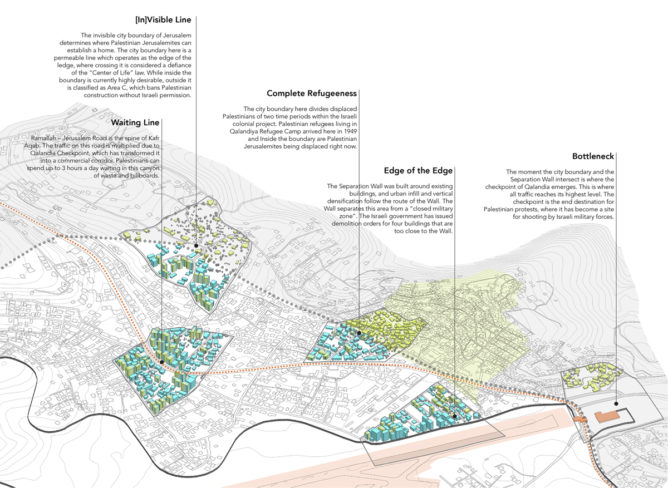 Moments represent a collection of urban conditions at a certain moment in time. And each condition is defined by the collision between the urban fabric with different colonial military structures and/ or political boundaries. Codifying buildings with ID colors reveals the way in which those territorial structures and boundaries work in parallel with the colonial policies to determine where Palestinians live. To fully understand what is at stake, possible futures are envisioned for each moment-whether the decision to excise Kafr Aqab from Jerusalem is made tomorrow, in ten years, or twenty. 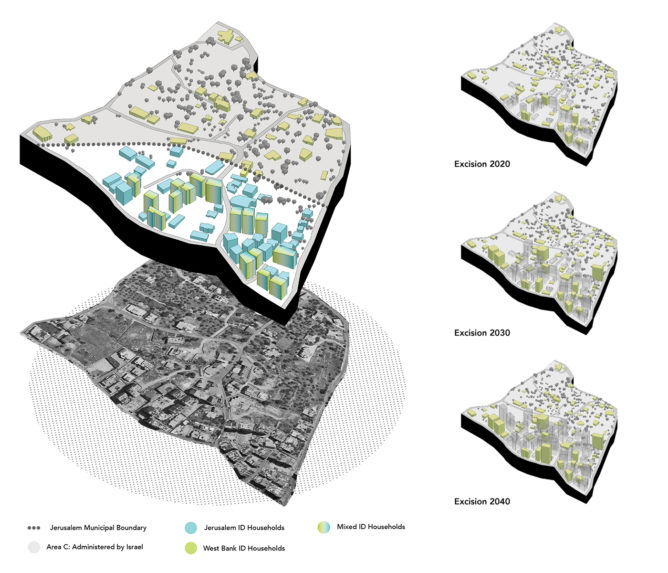 The invisible city boundary of Jerusalem determines where Palestinian Jerusalemites can establish a home. The city boundary here is a permeable line which operates as the edge of the ledge, where crossing it is considered defiance of the “Center of Life” law. While inside the boundary is currently highly desirable, outside it is classified as Area C, which bans Palestinians from construction without Israeli permission.

Excision will result in shifting the city boundary to align with the Separation Wall, probably transforming the area into Area C (or some equivalent) in order to consolidate control and prohibit further construction. The longer the excision process takes, the more visible this boundary becomes.