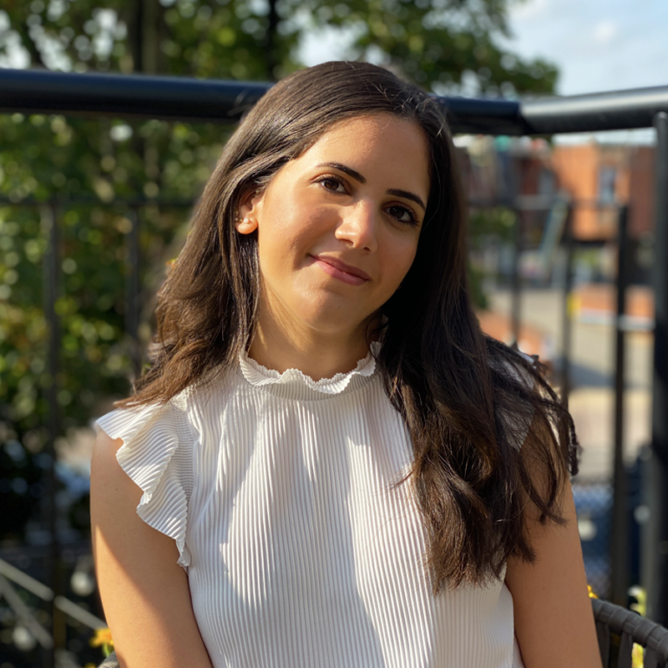 Meera Badran is a Palestinian-Jordanian architect and designer, currently based in London. She completed her Masters in Architecture at the Royal College of Art, where she developed an exploration into the body, voice and language in relation to political and social constructs within the Middle East and the Arab World. She hopes to continue this investigation, exploring the body and its physical, digital, political and social contexts – within the realms of architecture, art and theory. The Funambulist thanks Thandi Loewenson and Elise Misao Hunchuck for recommending her work to us!

Project /// On Behalf of the Voice

‘On Behalf of the Voice’ explores the role of physical and digital infrastructures in aiding political power, and their use to control bodies in the deeply contested city of East Jerusalem. This exploration takes on a multi-scalar approach – acting from the territory down to the [in]dividual – focusing on the concept of ‘dividuation’. Where, through the implementation of digital software (such as the collection of data, metadata and biometrics), a ‘dividual’ becomes the breakdown of an individual to nothing but their most diminutive parts.

Within this dividuation, this research focuses on the voice, speech and language – exploring the role of speech translation software and their effects when used on the deeply multilingual and surveilled society of East Jerusalem. Here, speech operated softwares, although extremely advanced, remain deeply flawed due to the complexity of the Arabic language and its dialects, causing glitches and mistranslations. Four softwares and their flaws are explored here: Layered Voice Analysis 6.50, Athena, Facebook’s Neural Machine Translation and Google Assistant.

The importance of these mistranslations lie in their consequences: from interrogations, detainments, to house-arrest and imprisonment. These consequences hold the ability to suspend the Palestinian-speaking body within space and time, and it is this suspension that completes the infrastructure of control. Furthermore, these soft and digital architectures are enforced with physical counterparts within the city: from the ‘shoot to cripple’ phenomenon, to barrier walls, checkpoints and dilapidated roads. These infrastructures all act to enforce this suspension, as they turn a ten minute journey into a two hour trail. Here, time itself becomes held hostage, stretching distances and isolating locations, creating an entire population with mobility disabilities.

‘On Behalf of the Voice’ therefore emphasises that the language that we speak, and the dialects in which we speak it retains a level of resolution that the AI software that track it, still does not. It asks the citizens of East Jerusalem to therefore use their language as a form of emancipation from digital control, using the architecture of their mouth as a form of resistance.

‘On Behalf of the Voice’ offers a new form of cultural practice, that can allow East Jerusalemites to navigate the city with their tongues, in order to not be understood. It asks them to train their bodies to speak in relation to the geographic locations that they live in, work in, and move through; from the historic city center to its outskirts, from the depth of the throat to the tip of the tongue and the lips.

‘On Behalf of the Voice’ is therefore a story that follows two dividuated bodies as they navigate through the city with their tongues. Through storytelling, three films are developed which use the voice in two distinctive ways: as a testimonial to the current oppressions, and as a dialogue that proposes language as a form of resistance.

The films project a way of navigating the city between two spatial realms – the internal body and external city – through oral and urban thresholds. The citizens of East Jerusalem fully act, live and belong in the city and its streets, and therefore the proposal would allow them to amalgamate and blend into the city as an undetectable glitch. This project seeks that the streets of the city become the database for this new resistance. This database is to remain open and incomplete. It is to be unstable, fragile, and extremely temporary – it is to be ever changing with the rapidly advancing context of digital surveillance. It acts as a conversation, not as a statement.

The Invisible Territory: Abu Dis from On Behalf of the Voice on Vimeo.

The Exposed Body: Qalqilya Checkpoint from On Behalf of the Voice on Vimeo.

The Essential Utterance: The Old City from On Behalf of the Voice on Vimeo. 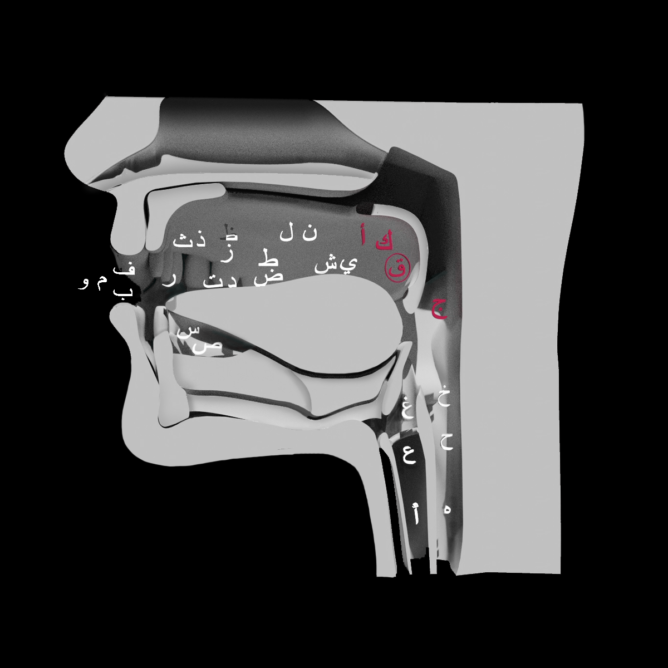 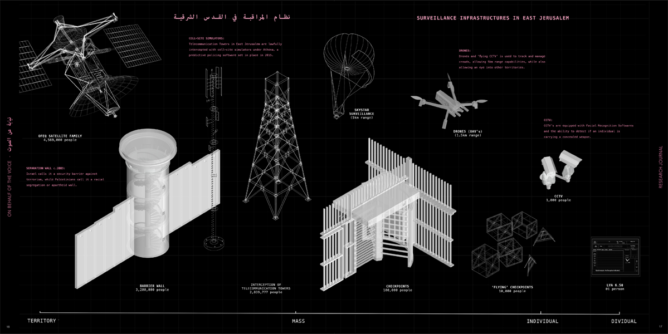 From the Territory to the Dividual: Exploring the physical and digital surveillance infrastructures in East Jerusalem to investigate the concept of ‘dividuation’. Where ‘dividuation’ is the act of breaking in individual down into their smallest digital parts. 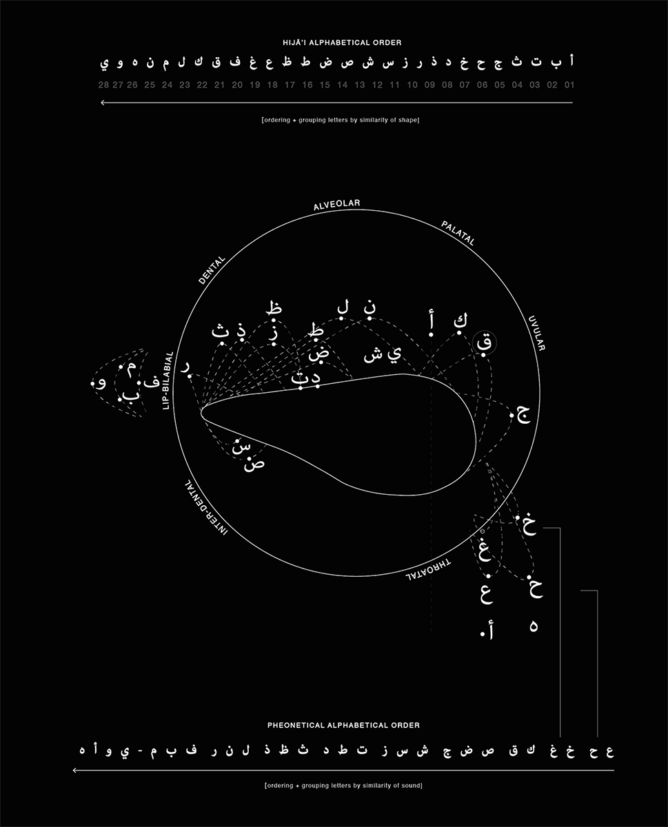 Proposing a shift from the alphabetical order to a new phonetic order. Understanding the letters and pairings of Arabic letters and their location of emergence from the mouth. Starting from the depth of the throat, with the ‘ع’, to the tip of the tongue and the lips, ending with ‘م’. 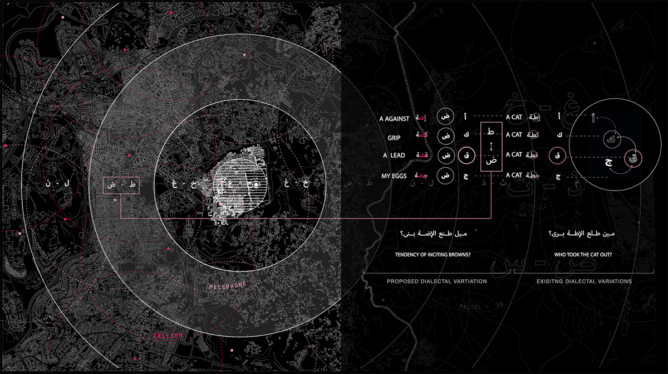 Examining translations and mistranslations in relation to the existing and proposed dialectal variations that act within a specific location of the City – Seeing how an utterance which may sound the same by ear, causes mistranslations to computer software. 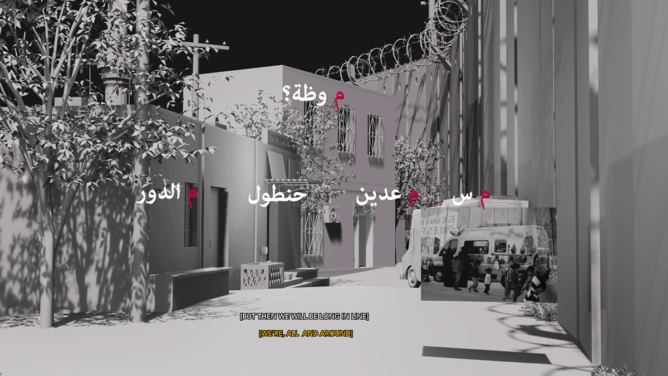 Film still from ‘The Invisible Territory: Abu Dis’. A conversation between mother and daughter as on their daily journey through the city.

‘The neighbourhood of Abu Dis, on the periphery of Jerusalem, is completely invisible in the digital world of navigation and mapping. In order to find your way there, you must rely on word of mouth. What was once only ten minutes from the Old City, now sits a checkpoint and an hour and a half away. ’ – Ghadeer. 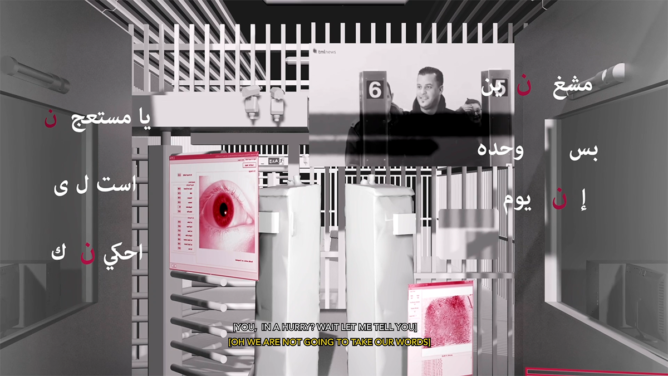 Film still from ‘The Exposed Body: Qalqilya Checkpoint’ A conversation between mother and daughter as on their daily journey through the city.

’The checkpoint consists of electronic metal gates, that we have coined as ‘ معاطى ’ [ma’ata’s], because they remind us of the devices used to pluck feathers off of a chicken, so that’s what we call it. ’ – Yara 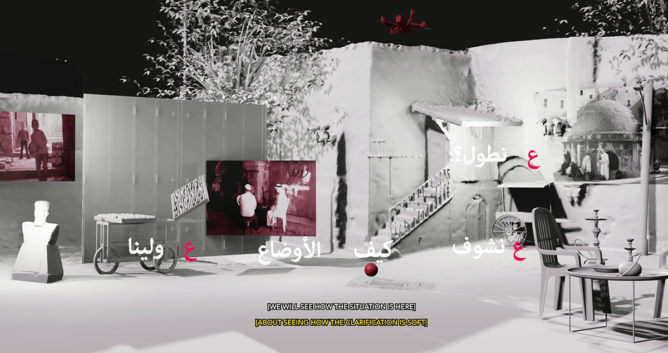 Film still from ‘The Essential Utterance: Old City’. A conversation between mother and daughter as on their daily journey through the city.

‘Due to the ain’s [ع [position as the innermost letter to emerge from the throat, its origins deep down in the throat are viewed as a sign that it was the first sound, the essential sound, the foundation of the voice and a representation of body, of self and of soul. ’ – Mohammad