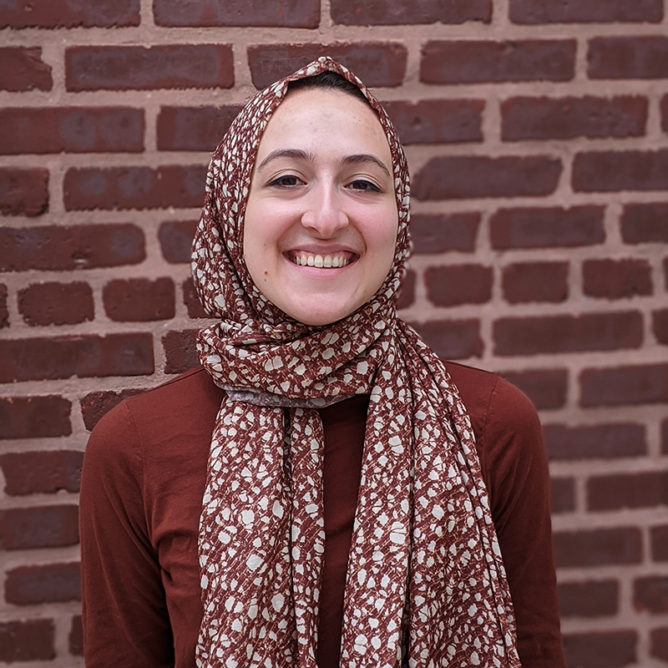 Noora Aljabi is an architectural designer currently working as a design team member at Studio Gang Architects in Chicago. She holds a B.S. in Mathematics from the University of Kentucky and received her M.Arch at the Massachusetts Institute of Technology, where she developed an interest in the question of architectural agency in charged social contexts. Her work has primarily focused on issues of migration, marginalization, and spatial justice as they relate to the political dimensions of architecture.

American Sanctuary: Architecture & (in)Justice is a thesis on the limits of architectural agency in resisting the violence deployed against undocumented people by the U.S. Immigration and Customs Enforcement (ICE). This work uses storytelling to demonstrate architecture’s complicity in this violence and its responsibility to confront it.

In recent years, many have joined together to protect the rights of their undocumented neighbors from ICE’s increasingly aggressive—and arguably unconstitutional—methods of immigration enforcement. As part of this growing Sanctuary Movement, several states, counties, and cities around the country have declared themselves “sanctuaries” and have limited their cooperation with federal government efforts to enforce immigration law. Although the notion of sanctuary has centered on policy, it should also be considered as an architectural and spatial phenomenon. The spaces in which ICE raids take place, such as the home, the workplace, and the courthouse, have been complicit in allowing for the transgression of rights during immigration arrests. Thus, there is a need for architectural interventions to resist this injustice.

These sites provide a range of potential contexts in which to intervene architecturally, from private to public, suburban to urban, and domestic to institutional. The transgressions taking place within each site also range from clear legal violations, such as coerced consent at the home, to more ambiguous violations of ethics, such as equal access to justice at the courthouse. The interventions, therefore, take on three different approaches: 1) the most pragmatic at the home, 2) semi-pragmatic/semi-ideological at the workplace, and 3) the most ideological at the courthouse. These three realms of engagement serve as proxies for the conversations that should be a part of the debate around sanctuary.

Through the exploration of multiple narrative outcomes of raids at the home, the workplace, and the courthouse, this thesis aims to demonstrate the capacity of architecture to change a sequence of events, while also recognizing the unpredictability of design decisions. This approach tests the limits of architectural agency in resisting injustice as part of the Sanctuary Movement—not by providing solutions, but rather by speculating on the many ways that Architecture can participate in producing social change by engaging with other disciplines, such as Law.

The project was published in The Funambulist 23 (May-June 2019): Insurgent Architectures and Architecture and Action (MIT Press, 2019). 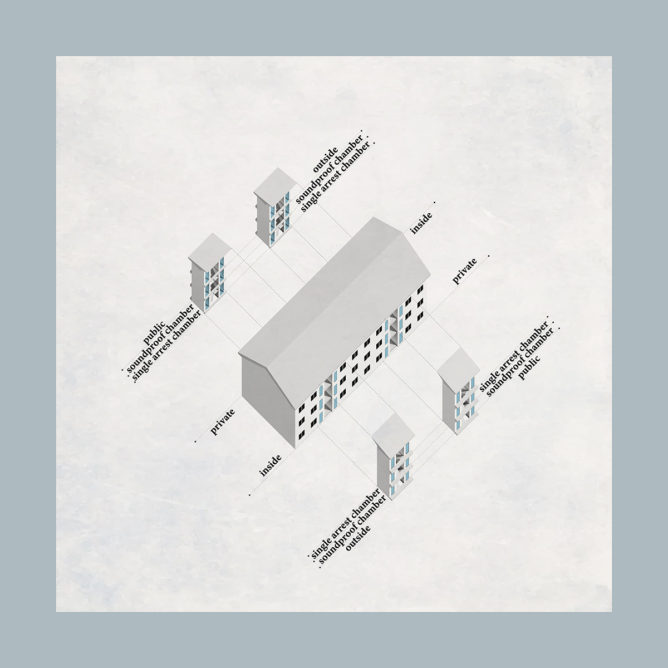 The home carries with it a sense of belonging, identity, and protection. Legally, these notions are reinforced by rights to privacy and property established in the Constitution. Architecturally, they are defined by the walls, roof, and floor that provide enclosure and shelter. 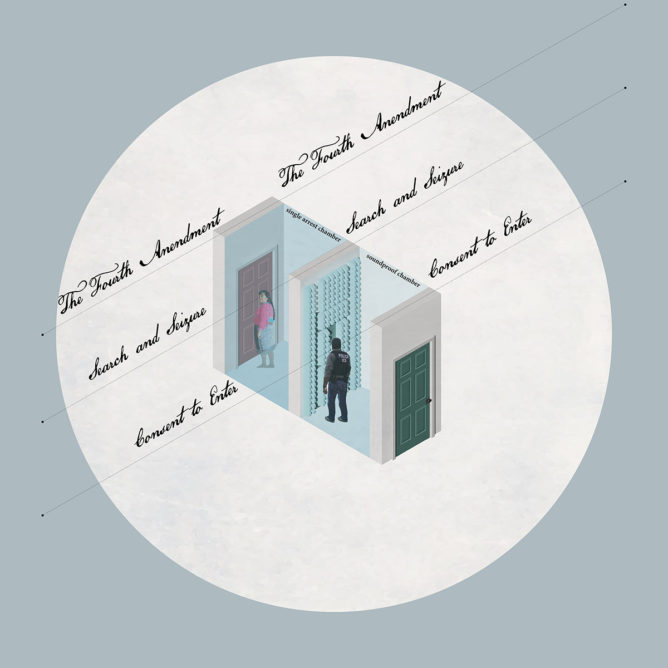 The threshold of the home establishes both boundary and access, determined almost entirely by the architectural element of the door. However, the legal understanding of the door in allowing consent to enter is arguably narrow, and therefore susceptible to exploitation by ICE. A thickened threshold reinforces the legal notion of consent to enter by introducing two additional chambers for interaction: a soundproof chamber to prevent coercion and a single arrest chamber to prevent search of the entire residence, both of which are clear legal violations. 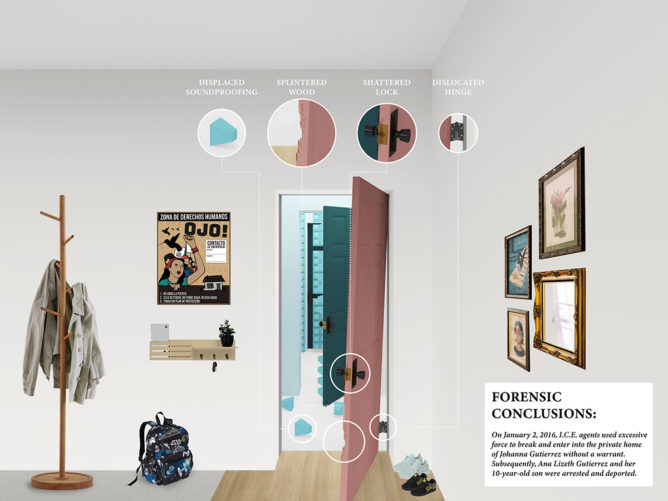 Though the architecture may fail in denying entry if the thickened threshold is kicked down, its material evidence can influence court rulings on ICE’s aggressive deportation tactics and the legal understanding of consent to enter. Simple architectural moves, such as changing the direction of the door swing, can leave a violent material trace that affects how the arrest is viewed in court. 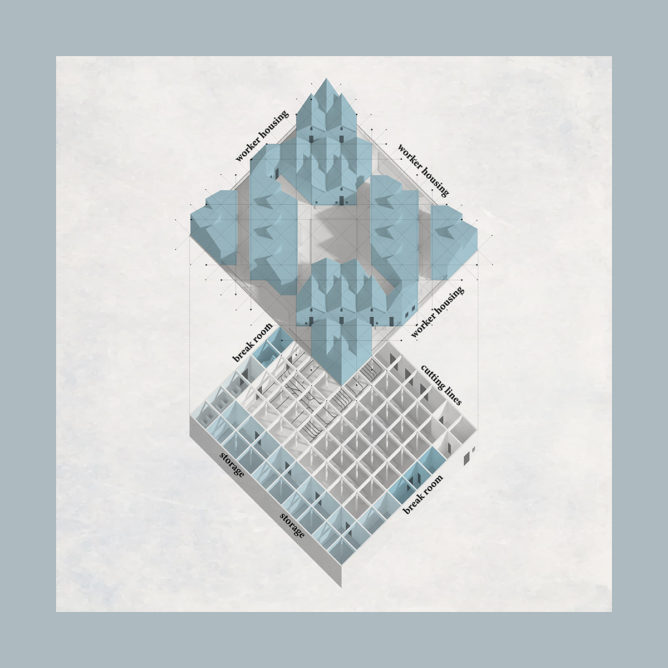 Factory buildings have become powerful symbols of industry and capital production in the U.S. landscape. The sprawling brick or concrete boxes were organized along grids meant to control and optimize every element of production, including the workers. The grid pushes the semi-private spaces, such as the employee break room, to the edges of the big box to allow for an open floor plan of public work areas. While this friction between public and private creates a complex setting for ICE agents to operate in, the organization of the modular rooms simplifies the raid and allows for large roundups of Latinx workers within the public areas of the building, regardless of immigration status. 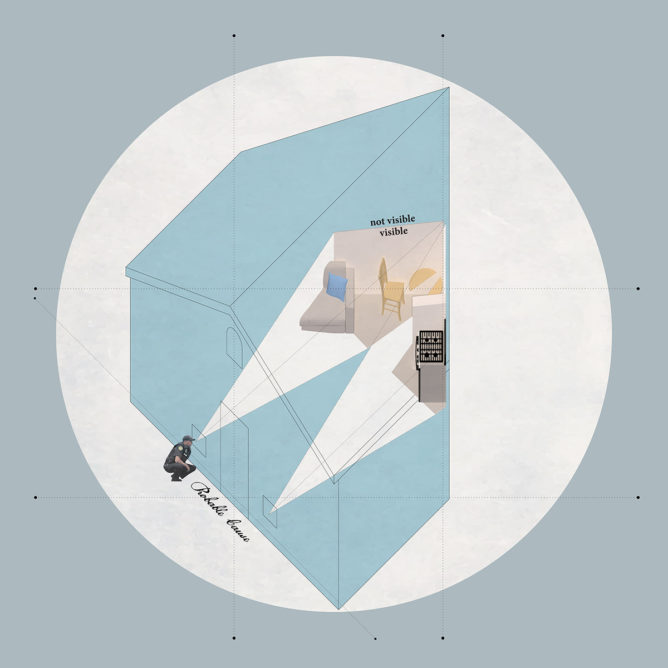 Workplace warrants are fairly easy to obtain, and often allow ICE to search the entire premises, except for residential dwellings. Operating within this loophole, the addition of private rooms in the factory limits views of employee faces and disrupts the regular grid of public work areas that allow for racial profiling and large roundups of workers. 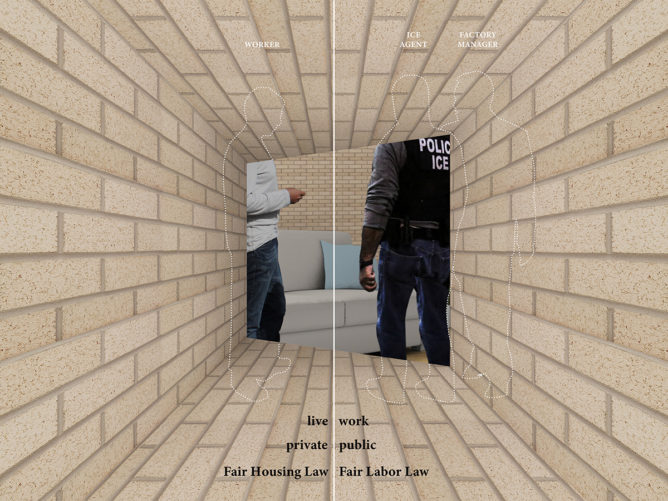 Even if the architecture successfully intervenes in a workplace arrest, it places more control in the hands of the factory manager, who may choose to exploit it by allowing ICE to arrest workers who demand better pay and working conditions. The complexity of the situation cannot be addressed by architecture alone, and requires a restructuring of labor regulations. But by overlapping the programs of living and working, the architecture already begins to suggest an overlapping of Fair Housing Laws with Fair Labor Laws. 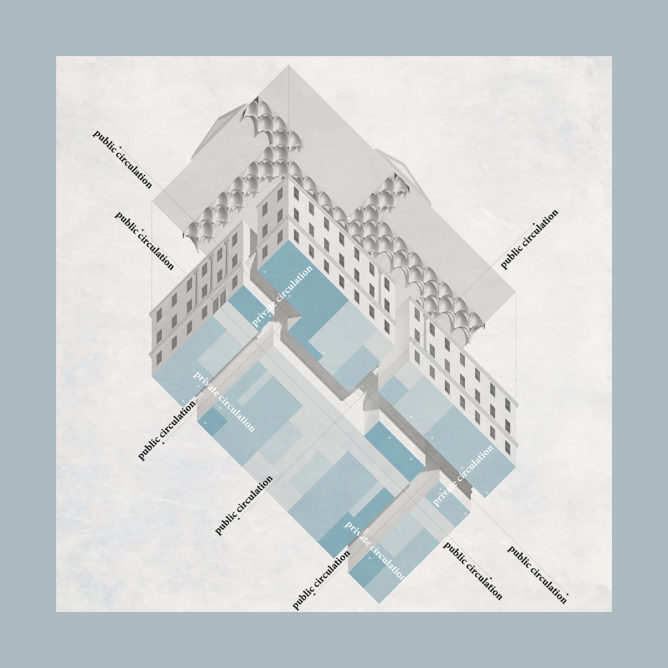 As the courthouse developed within the American context, increasing demands for control, efficiency, and security has transformed it from a public space of civic engagement to an institutional one of enclosure. Through regulation, segmentation, and centralization, the architecture has produced a complex space of hierarchy at odds with the ideals of equal protection and access to justice. 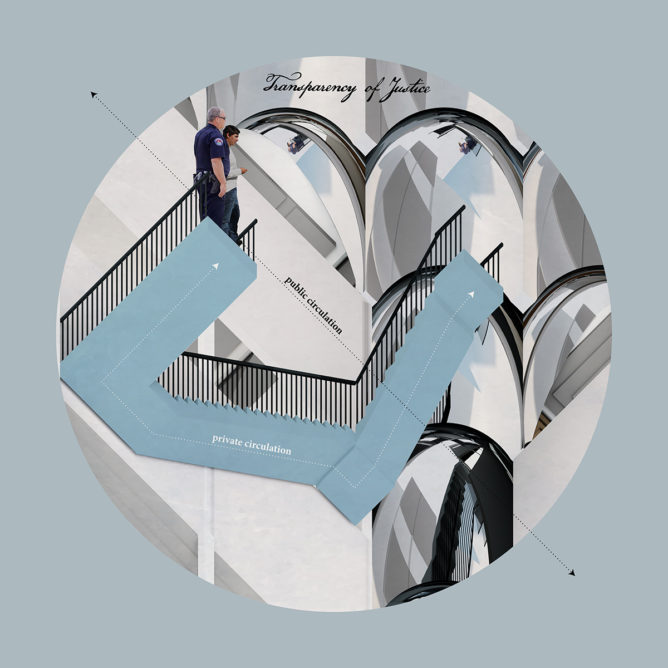 The corridor has allowed for the hierarchical orchestration of public and private circulation paths within the courthouse. This isolation of movement clearly serves to control public perception of justice in the courthouse, and provides another opportunity for exploitation by ICE, who often use back doors and private circulation to keep courthouse arrests out of public view. Although arrests in public places, such as courthouses, are legally permissible, public perception of these arrests can affect ICE’s policies, which many argue are counterproductive to maintaining lawful communities. A new Public Justice Corridor deploys a system of mirrors to make ICE activities in the courthouse more visible and accountable to the public. 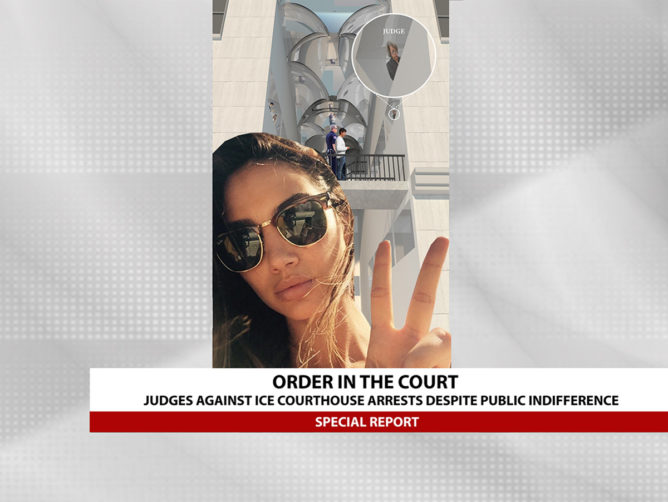 Even if the public is indifferent to the issue, the architecture can still prompt a change in dialogue by influencing the way judges and lawyers view the courthouse. The concept of the intervention reinforces the ideal that justice should be transparent and that the courthouse should be a safe place for people to access it. By doing so, it encourages supporters of this ideology to speak out against its disruptors.