Born in Dominican Republic, raised undocumented in the US, practiced architecture in Mexico, and now living in Denmark, my constant migration has made me a more hesitant architect. I have crossed continents and states and while landscapes may change the tapestry of colonialism is weaved together using similar techniques, with the hands of the architect often not so innocently involved. My work attempts to engage with colonial relationships, the power of citizenship, and constructs of nationality. Through both architectural proposition as well as the refusal of proposition I navigate the toolbox of the architect with caution.

The Danish government created a detailed legislation titled “Denmark without parallel societies, No Ghettos 2030.” The legislation is an explicitly racist legislation systematically targeting various areas with a more than 40% ratio of “non-westerners and their descents.” The legislation includes increased policing of these areas and a double punishment for crimes committed within the boundaries of a so-called “ghetto” compared to crimes committed in other parts of Denmark. Of the various gentrification strategies outlined in the extensive document are evictions, forced indoctrination of “Danish” traditions, as well as massive demolition, renovation, and infill projects. The legislation is a massive social experiment involving architectural investments of hundreds of millions of Euros into these areas. After a year of investigation into the architectural strategies being proposed and whether or not they were successful and what could otherwise be done I recognized that I was inadvertently legitimizing the legislation I thought I was criticizing. The project then became about architects refusing any projects that were connected to or growing out of this legislation. There are no images of this project because the project was a refusal to propose architecture.

There is increasing pressure for European museums to return many objects filling their exhibition spaces and storage rooms that were acquired during peak European Imperialism. In the case of France, the state has begun to engage in conversations with former colonies and in some rare cases has returned objects to their place of origin.

The project is a museum centered around the return of contested art that France has acquired from its former colonies. A museum that creates an archive of the objects as they are returned is situated in the Bois de Vincennes, a park on the Eastern edge of Paris. The archive is created in order to avoid the works being returned without confronting why there are thousands and thousands of these objects in France in the first place. So, the museum serves for copying and creating a public archive of objects looted or otherwise acquired under dubious colonial circumstances as well as creating interventions at specific points in the park that reveal a colonial condition and may help in understanding how and why these objects are in France in the first place.

The museum is scattered across the forest of the Bois de Vincennes. The park was temporarily known as ‘the thinking forest’, before the demolition of the influential experimental university at the park. The project seeks to engage with the park as the ‘thinking forest’ by creating interventions at points of significance to French colonial legacies. The interventions require walking through the forest from one point to another. The intention is that the museum happens the most at the un-designed moments walking through the forest from one intervention to another where the forest may serve as space for reflection and thinking. 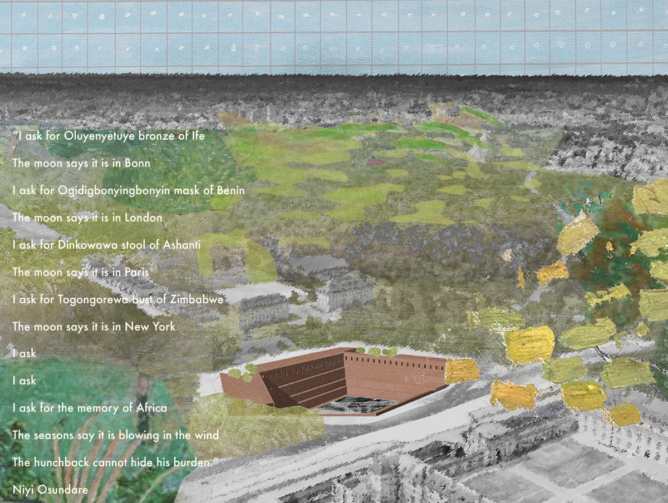 Across from the Castle of Vincennes lies the archival house. The anchor of the museum is placed here in relationship to the castle as the French Royal family played a fundamental role in French colonization. The archival house houses a research space and laboratories for archiving and copying objects as well as a continuously growing public archive of objects that have been acquired under colonial circumstances and are to be “returned.” 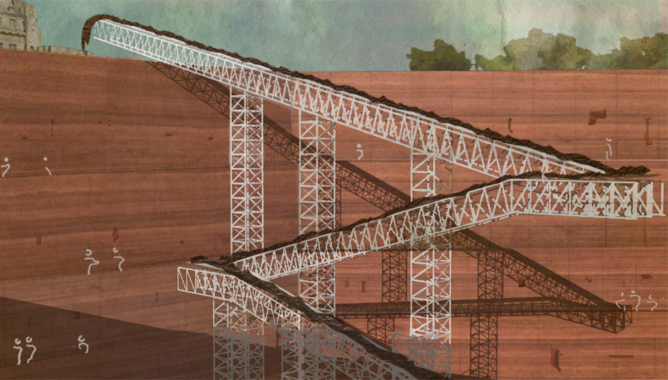 Objects are copied before their departure from France and then cast into an archive. The continuous archive grows deeper into the earth over time. An archive of the returned art is done in order to avoid the story of these objects being in France and the relationship they represent vanishing from French consciousness. 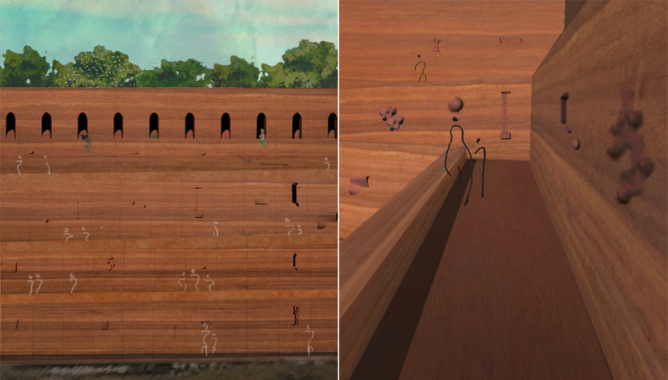 (Left) Elevation at the archive. The archive ramps down into the earth, as each object leaves France the archive grows deeper, unearthing histories. (Right) View from path. 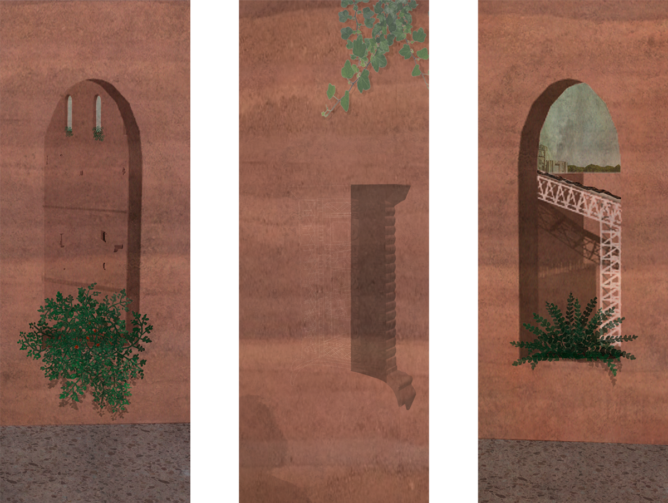 The object is cast into the walls that make up the ongoing archive (center). Arches create views into the large archival space from above (left and right). 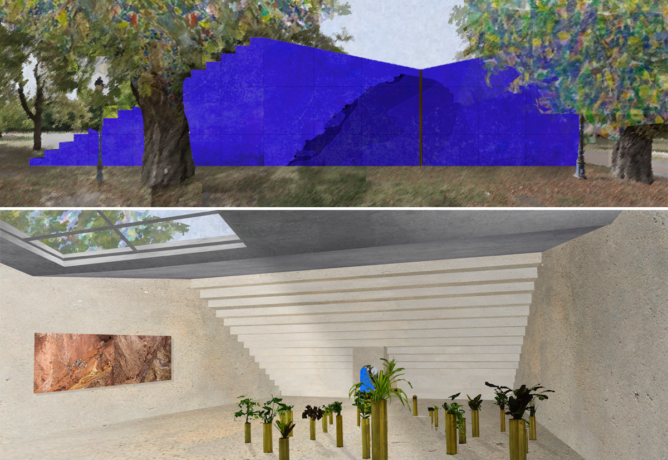 Additional interventions are scattered throughout the park at sites that relate to colonial legacies. One intervention happens at an area that was formerly a detention center for Algerians. An exhibition space is made, a map noting the colonization of Algeria is carved into the dyed blue limestone façade. The interior houses a rotating exhibit space.

A ceremonial space for those wanting to host a ceremony before an object leaves France is located at the site of the demolished Experimental University at Vincennes. 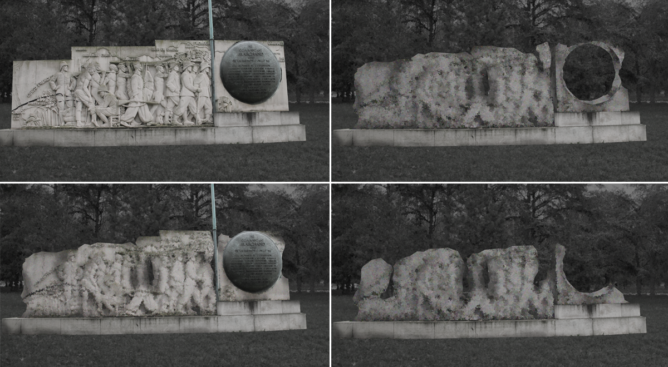 An intervention at a colonial limestone statue. The statue is continuously covered in a limestone dissolving vinegar mixture that would slowly eat away at the limestone carvings that celebrate colonization.