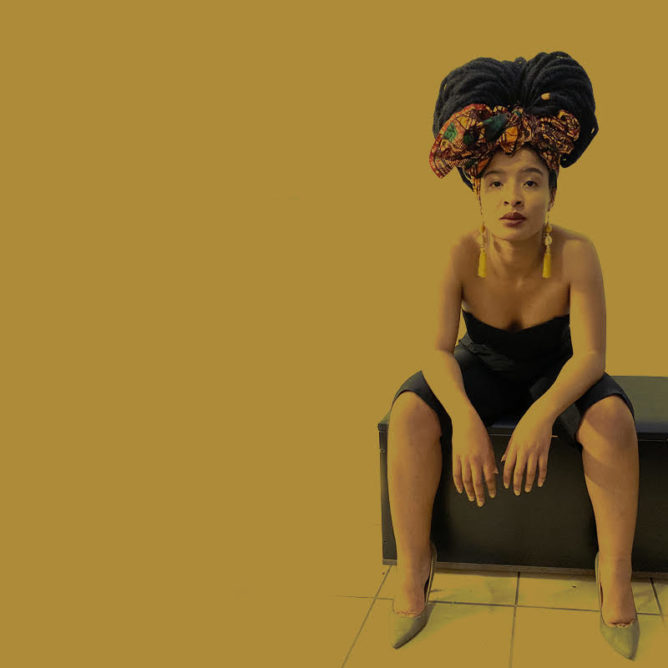 Kgaugelo Lekalakala is a young architect, practitioner, local critic at the Graduate School of Architecture, University of Johannesburg South Africa, and artist from Mmametlhake, Mpumalanga, South Africa. Her work explores the Black female body in space, using paintings, graphics, and architecture to critique spatial constructs. Her studies at The National School of the Arts (2012) where she specialized in sculpting, ceramics, painting, and design, broadened her medium in Architecture. In 2016 she attained her bachelor’s degree at the University of Cape Town (BAS) and graduated at the Graduate School of Architecture at the University of Johannesburg (2019) with a MTech Arch (Prof) (CW). Her work has been published in City Journal: Tales of the Vulnerability of African Black Women in Transit Spaces. (April: 2020).

The title of my work is called Tales of the Vulnerability of African Black women in Transit Spaces. It is centered on the concept of transit and transitional spaces as both real places of moving and as metaphorical spaces of journeys, transitions, and changes. It talks of a place we are from, and the place we move to — a continuous process of being in transit. It explores a series of narratives of transit. It takes the position of Black African women moving through space adopting the method of surrealist collages transformed into an architectural tactic to critique and expose issues of vulnerability Black female bodies encounter in transit spaces. These surrealist images explore how women traverse different spaces as they move from their domestic realm passing through taxi ranks, walkways and sidewalks that places them as object of male gaze, artefacts in space, which creates gendered power dynamic spaces in urban-rural landscapes.

This study is dear to me because I am from a village called Mmametlhake in Mpumalanga, South Africa, but throughout my childhood I was mostly at my grandmothers’ household at the nearby village called Seabe. Her home holds many tales of what growing up as a Black woman entailed. Her life was constantly ruled by the male heads, her father and, later, her husband. She would describe how she was a constant object in her home, tossed, broken, and ungrounded. The project further explored how these gendered dynamic spaces have filtered into the streets we walk through. Throughout my life I constantly navigate between rural and urban spaces (using public transport), moving from Bree Taxi Rank (Johannesburg, South Africa) to Bloed Taxi Rank (Pretoria, South Africa). Moving through rapidly growing dense passages in the inner city can be daunting as female. You cannot help but notice how fragmented these spaces are, to an extent where you are merely an object moving through space. Gloria Anzaldúa writes in her piece “Intimate Terrorist: Life in the Borderlands” (1987), how the world is not safe for women to live in:

“We shiver in separate cells, in enclosed cities, shoulders hunched, barely keeping the panic below the surface of the skin, the attacks in the streets. Shutting down.”

She also explains how a woman is unable to feel safe when her own culture is constantly critical of her and when the males of all races hunt her as prey. The female body is locked, immobilized, it cannot move forward, cannot move backwards. The use of surrealism as the theme for the work was essential as it allowed the work to stimulate the subconscious and expose reality. Suzanne Césaire surrealist writer and cultural theorist wrote of “Marvelous surrealism” (1943) as a mode of transcending the apparent and crushing colonial (Capitalist) real. For Césaire, as quoted by Thandi Loewenson and Thom Callan-Riley, “far from contradicting, diluting, or diverting our revolutionary attitude toward life, surrealism strengthens it” (Césaire, 1943). Following Césaire, surrealism is essential in this study as it creates temporary distance, not to dilute reality, but rather to strengthen the critique, allowing the audience to build a perspective for when they could engage with the reality again. Therefore, it reveals and exposes the absurd nature of the truth (Sindi: 2019) using particular characters, figures and situations.

When the female body travels between rural and urban landscapes, they are likely to be exposed to sexual assault in small passages or alleys around transport nodes they need to take when going home. This further leads to extensive spatial negotiations, compromises, and precautionary measures (wearing layered clothes, leaving work early to prevent being harassed at night) that limits woman’s ability to experience mobility as freedom. (Uteng 2011, 11). Some escape their patriarchal homes only to enter into transit spaces where she will still exist as an object or an artifact, where her body is a destination of every corner. Therefore, she is forever in transit, unsettled, and ungrounded. (Lekalakala, 2020) 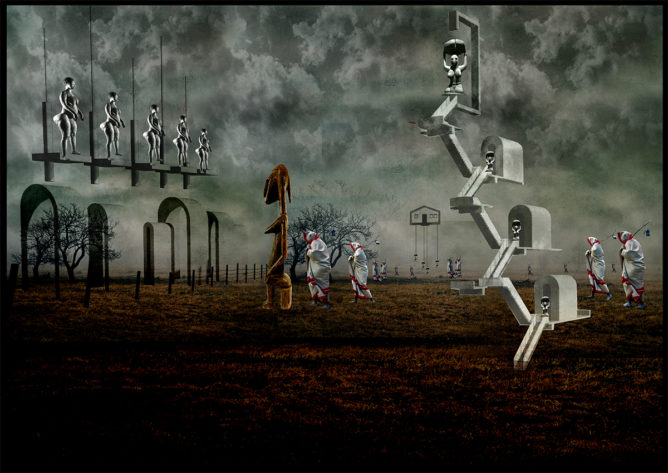 I navigate between rural and urban, while followed by some of the burdens of ‘my’ tradition;
I am displaced by the fragmentation of the urban landscapes.
Landscapes that are schizophrenic by nature.
Diagnosed with the tensions of gender, tradition and culture.
Leaving us moving in passages that make us irrelevant and almost invisible (Lekalakala: 2019).

This image depicts women who migrate from rural areas into the city, distancing themselves from the role as a mother, leaving daughters with fathers and uncles, navigating these transit spaces as an artefact that exposes the cultures and traditions that silence her; she is the object entering the surreal landscapes. 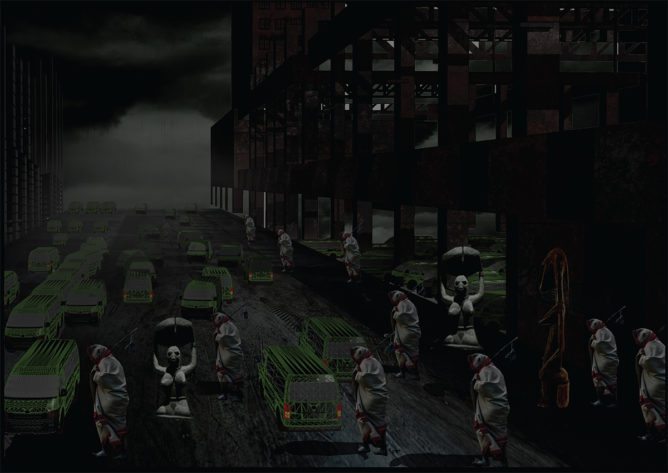 “Xsxs-Xsxs, Mwxa’Mwxa, A o mphe marao, baby“
From my so called fathers and brothers. They do not see me. We are their artefacts.
Taught to ignore and reach your destinations.
Look angry, when you go to town, that way they won’t touch.
Moving through the influx of people, she gazes to the right, she sees IT, smells IT.
The spear aimed at the walls and ready to mark its space.
You do not see me.”

A lot of consideration has to be taken at the links to public transport for safety in urban areas where women who move and are dependent on public transport-the entire journey from home to public transport station and vice versa has to be assessed from a safety point of view. Figure 2 shows a taxi rank, which is a transportation node that houses many taxis in South Africa, taking people from Townships into the inner city to work daily. As mentioned before, many disadvantaged Black people use taxis to move from Townships into the inner city to work. This is a cheap mode of transport throughout South Africa and even Africa as whole. This drawing shows the displacement of the female body in space. From a schoolgirl to a mother. Being touched, provoked, immobilized, and shut down in a patriarchal space. Where you have the pissing wall, a wall where men urinate freely even with the presence of women and children. 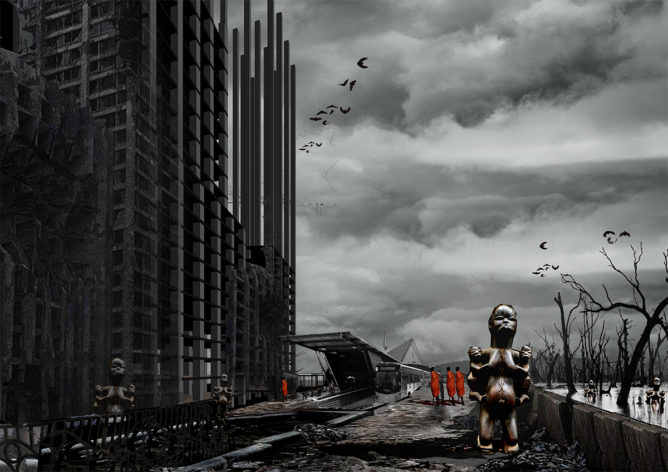 We are visitors, we migrate to urban landscapes.
Serving masters that may never know how I move in transit.
Leaving my daughters with fathers and uncles.
Home is distant, it is disappearing.
We are gradually getting extinct.

Figure 3 and 4 explore transit beyond the Borders in public spaces in Tanzania. Based on a collaboration/workshop with Ardhi University, Dar Es Salaam, Tanzania, and University of Johannesburg, this image speaks to the way in which African tradition and cultures blurs itself across borders. The work exists in the imagination, but the genius of that imagination is these hybrid spaces. Dar Es Salaam, Zanzibar, and South African sites. During the visit to Tanzania we documented the nature of these landscapes and thus influenced my project. We found that the majority of the public spaces were inhabited by men while women were indoors, in the domestic realm. When out, women were almost never stationary in public spaces and they usually moved through and between transit spaces, without settling or staying still, much like South Africa. 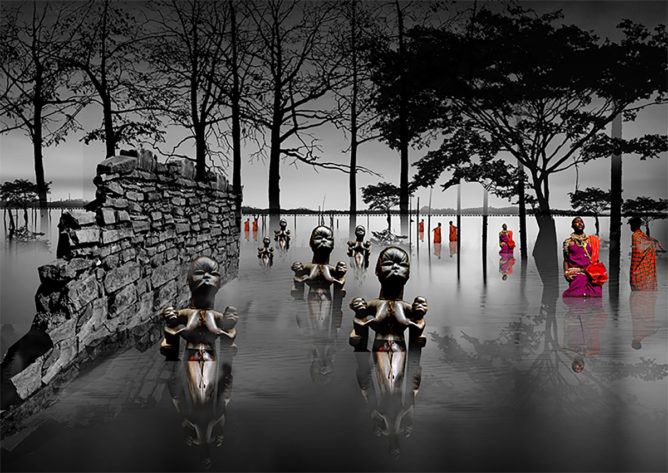 Passages that are flooded by tradition
Where she moves silently, discreetly, to serve her home, before sunset.
She does not set in space, she merely moves through it because it was not hers to begin with.
She holds life, carries it and conceives it.
But she has no control over her life.
She is in transit. 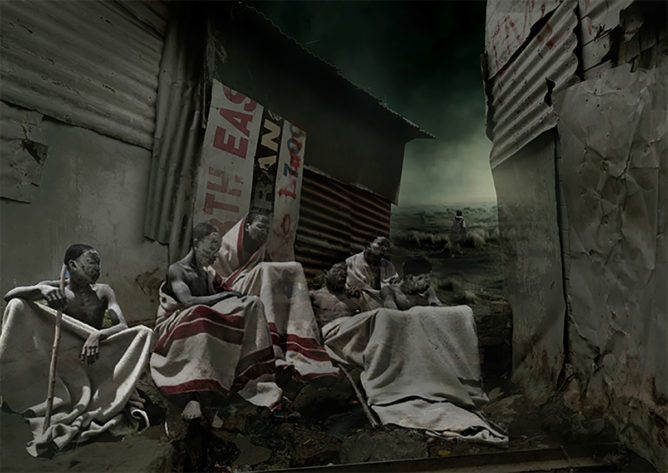 Figure 5 shows passages in the townships where due to lack of public spaces. Majority of the Black people in South Africa must be creative in making public spaces where gatherings and an escape from their homes are made. 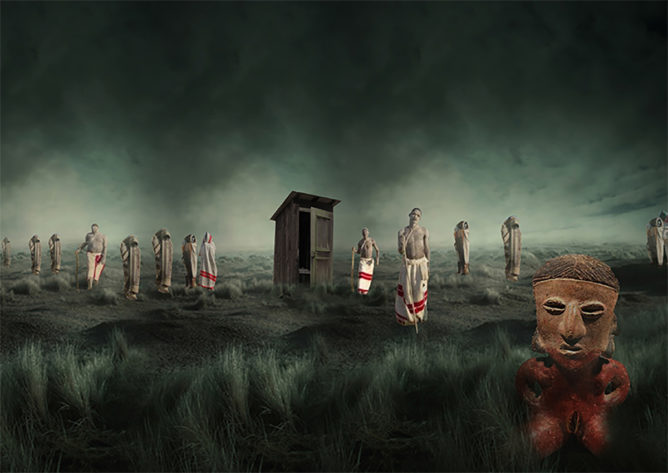 Figure 6 shows the trip to the Long Drop. Long drops are commonly used as public toilets in schools and public buildings in South Africa. Mostly found in rural settlements and townships as mentioned previously. These are areas where there is not enough attention given by Government to provide public spaces therefore people create their public spaces, streets, corners, walkways, and alleys are now defined as public spaces. An architectural weapon that is left for communities to figure out how to use. Little girls may take long walks to these toilets, coming back not understanding what has been taken from them. The trip to the toilet is one of terror and exposure to being vulnerable similar to the trip to school, where children go to school through these passages and mothers can only hope that they come back home safe.

2. The UCL. 2019. “In The Permanent Readiness For The Marvelous.” Issuu. N.p. February 18. https://issuu.com/bartlettarchucl/docs/bartlett_phd_projects_2019. [Google Scholar]