Léopold Lambert – Paris on March 11, 2015
If you enjoy articles of the blog, have a look at The Funambulist Magazine!

While I was recently spending some time in Beirut and Cairo, one of the things that stroke me is the difficulty to represent these cities through photography. Of course, this is always true when one visits a new city; photographs tend to correspond more to the confirmation of the vision one had before visiting it than to a fair representation. In the case of Beirut, that could materialize through a focus on its ruins from the war and thus the repetition of a representative cliché, rather than showing the profusion of unaesthetic luxury towers. But the exercise is even more difficult because of the regular denial of representation enforced by private security forces or the army itself. An important part of the city reaches an important degree of militarization that materialize through the multitude of road obstacles, gates, concrete walls (often painted like the Lebanese flag), defensive kiosks, trained dog houses, road checkpoints, and other militaristic apparatuses, none of which are easy to photograph, since their very function is to survey public space and its bodies’ behaviors.

The same thing is true to an even higher degree in Cairo, since the July 3, 2013 coup d’état by General Abdel Fattah el-Sisi and the national army. Downtown, an entire neighborhood containing the Ministries of Interior and Justice, as well as the Houses of Representative is fully controlled by the military: small streets are blocked with the infamous stone-block military barricades, while both vehicles and pedestrians are either granted or refused access in the larger streets depending on whether they work in the neighborhood or not. Numerous other buildings/areas in the city are also guarded by the military, sometimes with the help of heavy equipment — there is at least a dozen of tanks ready to engage in the immediate periphery of Tahrir Square. The act of taking photographs is immediately considered as suspicious, cameras are inspected and some photos are often deleted. This lead to the following question: how does the photography of something that is blatantly offered to the vision of anyone in the street be considered as such a dangerous gesture?

Just like the architectural drawing (see “Architectural Drawings as Military and Judiciary Documents“), the photograph allows the remote analysis of a given situation and, in the case of (para)military strategy, to distinguish potential faults in the defense of a building or a street. The history of spy photography reveals such a strategic ambition for photography. The photograph also has the status of proof in judicial procedures as noted in a past article dedicated to this question. Nevertheless, there might be something deeper behind the dangerousness of the photograph, something along the lines of iconoclasm, a fear of what the camera captures. As argued in a past text, iconoclasm is not merely the hatred for representation but, rather, the actual fathoming of its power, and the subsequent fear of it. The aim of the camera shares similarities with an actual weapon in our imaginary and there might be a more or less conscious primitive fear of the violent capture of something’s essence through its photograph.

This article is only the shallow intuition of something that has probably been researched in depth by photograph theorists; I am thinking of Ariella Azoulay in particular. The following photographs are the only ones that I succeeded to take (and keep) during my stays in Cairo and Beirut. Their unsatisfying poverty is more useful to prove the argument presented above than to actually present an account of the militarized reality of these two cities. Photographs of Cairo in particular are however easy to find online for such an account, and a future ambitious Funambulist project should also bring more light on this urban aspect. More on that in a few weeks!

Cairo – Near the Ministry of Interior :

Cairo – National Democratic Party Building (burnt in 2011) and Egyptian Museum / Note the hidden tanks in the left part of the picture :

Cairo – Near the Houses of Representatives: 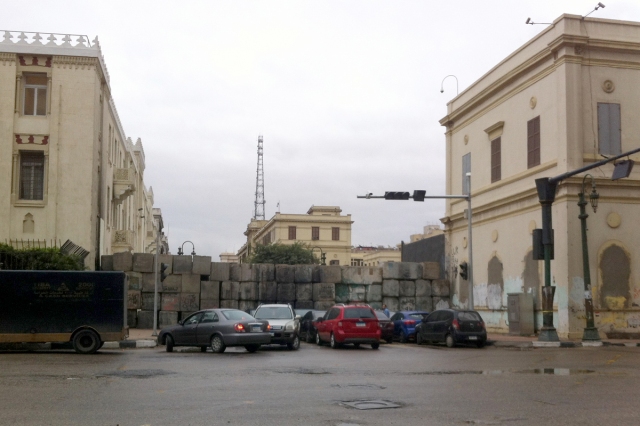 Beirut – Near the American University in Beirut: 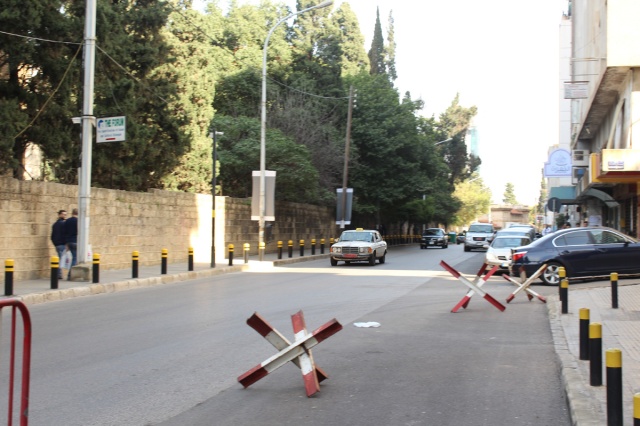 Beirut – Near the Lebanese School of Law: