Léopold Lambert – Paris on November 20, 2015
If you enjoy articles of the blog, have a look at The Funambulist Magazine!

After last January’s double attack (political assassination of journalists, and antisemitic carnage) in Paris, I had not written anything, in order not to add more noise to the astonishing brouhaha that followed them. The brouhaha, that had gradually lost some strength (but certainly not disappeared) is now back to full volume after last Friday’s (November 13) six deadly attacks in Paris that killed 129 people and injured more than 400 others. Perhaps, the present article will do what I then feared in January: adding useless noise that will only convince the convinced, but just like my series of articles in the summer 2014 when the Israeli bombs on Gaza were killing dozens of Palestinians every day, I simply feel compelled to write, if only for its cathartic function. To you who will read this text, please only know that my argument is full of doubts and that, on the contrary of the many self-declared prophets and experts that saturate our medias, I claim doubt as the only dignified position one can adopt in this situation.

After the attacks that both President François Hollande and Prime Minister Manuel Valls experienced themselves from relatively close (Hollande was attending the football game between France and Germany at the Stade de France where three bombs were detonated, and Valls lives only 200 meters away from one of the attack sites), the French government decreed the State of Emergency, that suspends large public gatherings — although, fortunately, no gatherings at the sites of the attacks or on the Place de la République have been dismissed — and allows the deployment of additional police and military force in the city. On the contrary of the United States, France does not have a constitutional obstacle to have soldiers patrol in the city and, since the series of bombs exploding in Paris in 1995, Parisians are used to regularly see a few of them in the spaces of national train stations. Since January, the military presence was much more visible, in train stations and airports, but also in the vicinity of synagogues and Jewish schools (see the photograph below taken a month ago). In the last days, an important amount of heavily armed police officers and soldiers operates in the city (see photos at the end of this article), implement checkpoints, while others close at will entire neighborhoods (cf. Saint Denis in the Paris banlieue and Molenbeek in Brussels) to lead arrests and assaults in areas defined by the media as “cradle of terrorism.” People who know the beautiful cities of Saint Denis and Molenbeek can only sigh in front of this ineptness. Such terminology associating its largely Muslim inhabiting population to the deadly action of some individuals, can only lead to the numerous acts of islamophobia we are currently observing in France and elsewhere. 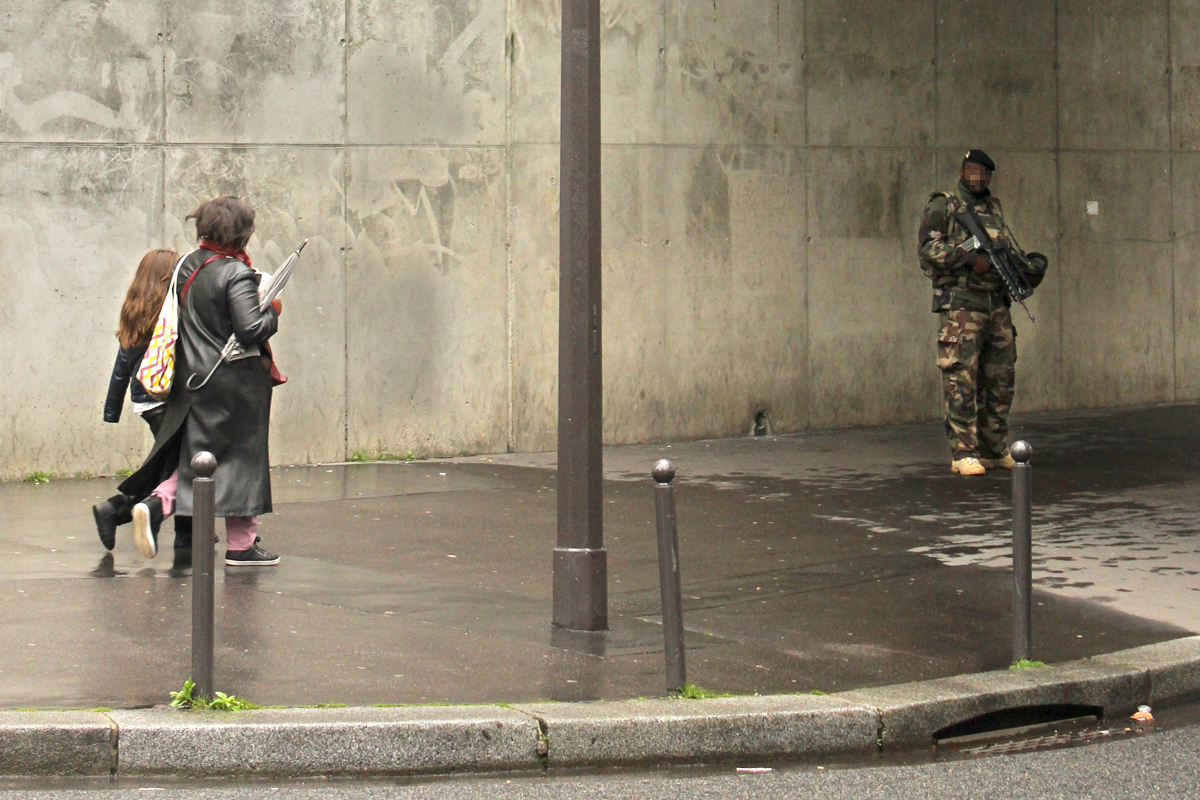 Before last Friday, the State of Emergency had been decreed only three times since its creation in 1955: during the Algerian revolution (1954-1962), in New Caledonia in 1984 during the most intense moment of the independentist stuggle (New Caledonia is still a French department today), and in 2005 during the revolt of the banlieues (see past article). Yesterday (Nov. 19), its three-month extension was voted by an overwhelming consensus, only six representatives voting against it. Unanimity could also be found in the applause manifested to Hollande on Monday when he gave a speech in front of the Congress, that is the National Assembly and the Senate both gathered in a room of the Versailles palace, symbol of the monarchy and, later of the temporary French government that ended the 1871 Paris Commune in a bloodbath (see past article) right after which the newly elected National Assembly gathered in the very same room. In his speech, Hollande argued for an amendment to the Constitution regarding the state of emergency, the state of siege (most severe legal form of suspension of rights) and the highly demagogic strip of French citizenship for people found guilty of complicity to “terrorism.” Let us note that a law facilitating the collect of personal data for counter-terrorism intelligence had also been recently voted by the Parliament and is now in application. 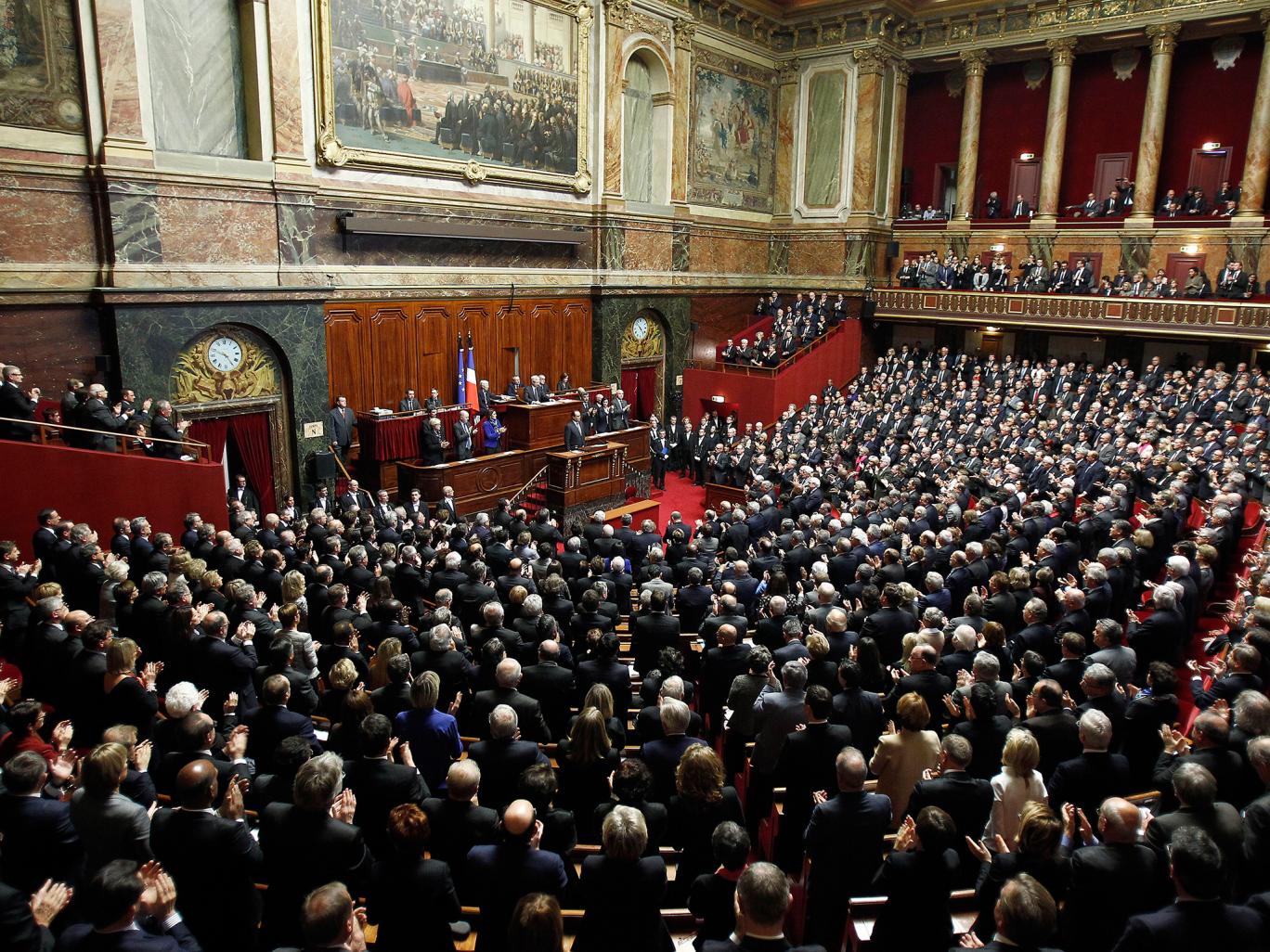 Before this speech and during the three days of national mourning that the government had itself decreed, the French air force had bombed the city of Rakka, designated as “Daesh stronghold”  (see the previous article about this terminology that rhetorically diminishes the potential status of civilian of people killed by this kind of bombardment). Many people have observed the rhetorical proximity of Hollande’s discourse and action with the ones of George W. Bush after the 2001 attacks on the World Trade Center and the Pentagon. The only difference might lie in the personal conviction of the two men, since Hollande can be suspected to adopt such a martial attitude in order to cynically leave no room for expression to the two major right wing opposition parties, Nicolas Sarkozy’s Republicans — yes that’s their name now! — and Marine Le Pen’s Front National. Such political calculations that leads to more war and victims (precisely the aim of these attacks) constitute the continuation of the usual French politics, from the two-century long internal and external colonialism, to the last decade’s drastic ‘americanization’ (or ‘nato-ization’) of French foreign policies regarding the Middle East and the military interventions in Libya, Mali and Central African Republic. It is my conviction that the fact that an important part of French society is so eager to believe and propagate the “they attacked our life style” narrative can be explained by the incapacity of this society to look at this colonial past and its current structural racism. However, I do not mean to explain the attacks through this observation. Such an attempt to “explain,” rather than “comprehend” is, I think, useless and doomed to divide us; after all, we can attribute to them the importance that we decide, and simply grieve our friends and family members who were killed. What is crucial however, is that in our aversion of these attacks’ violence, we understand the violence of our own political actions, both nationally and internationally.

We are in a state of emergency, but not the emergency to deploy more security, suspicion, and bombardments, but, on the contrary, the emergency to dismantle the violence of our society’s structures. This cannot be manifested through the tolerance that the dominant social group would manifest with condescension towards the one that experience this domination on a daily basis, but, rather, through the radical construction of an open-ended definition of this “we” in all its heterogeneity. Such a process is unlikely to prevent any future other attacks, but only through it could we then claim that the violence we experience is unilateral. 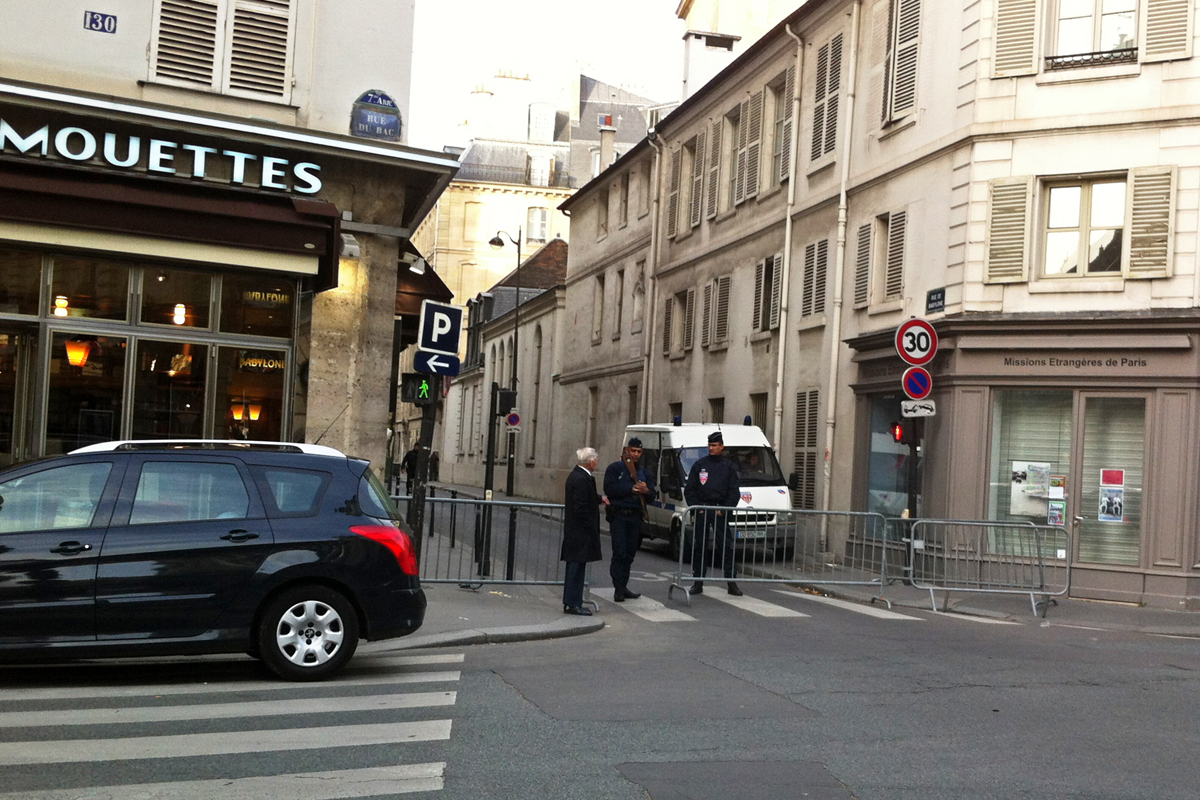 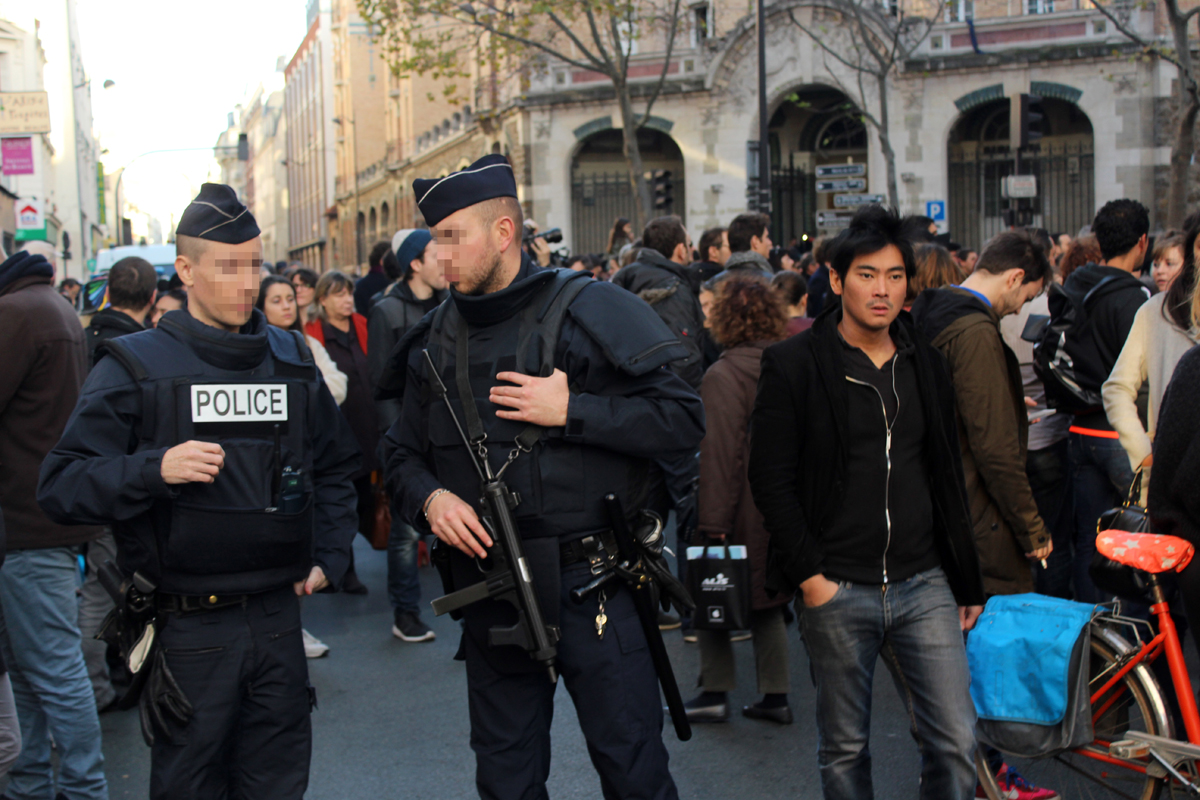 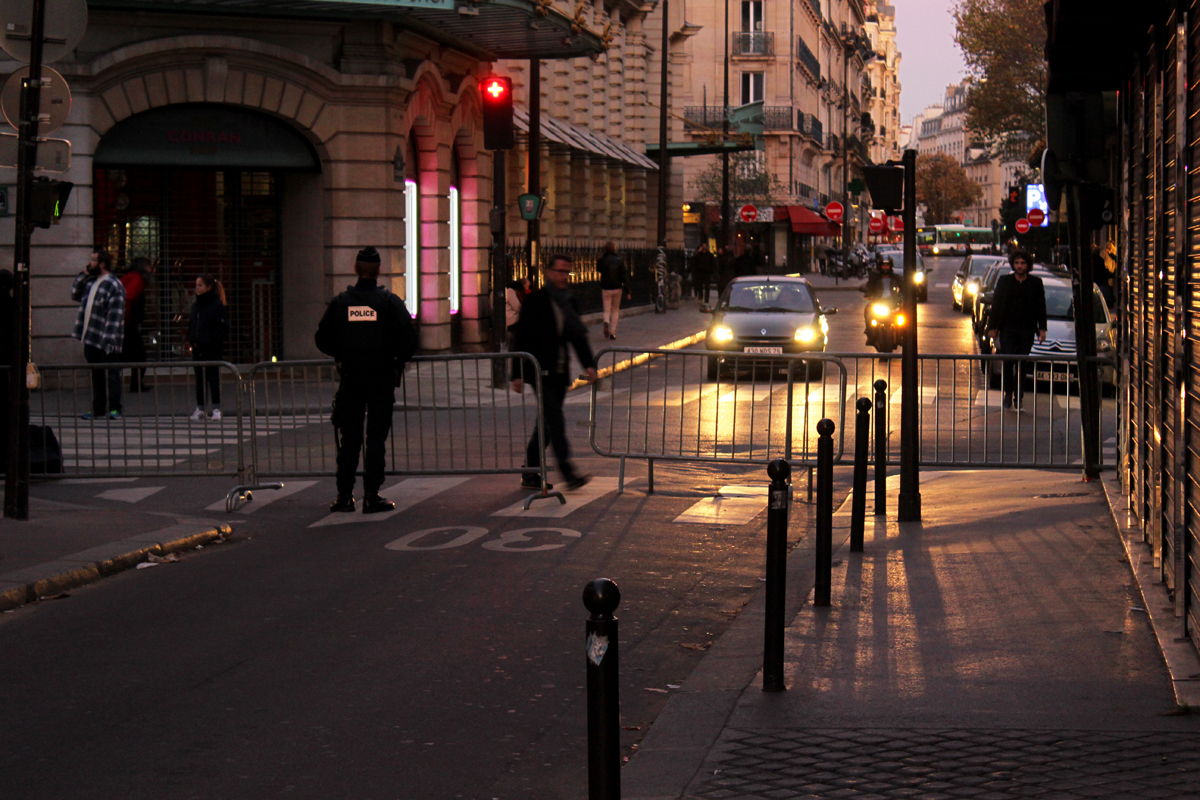 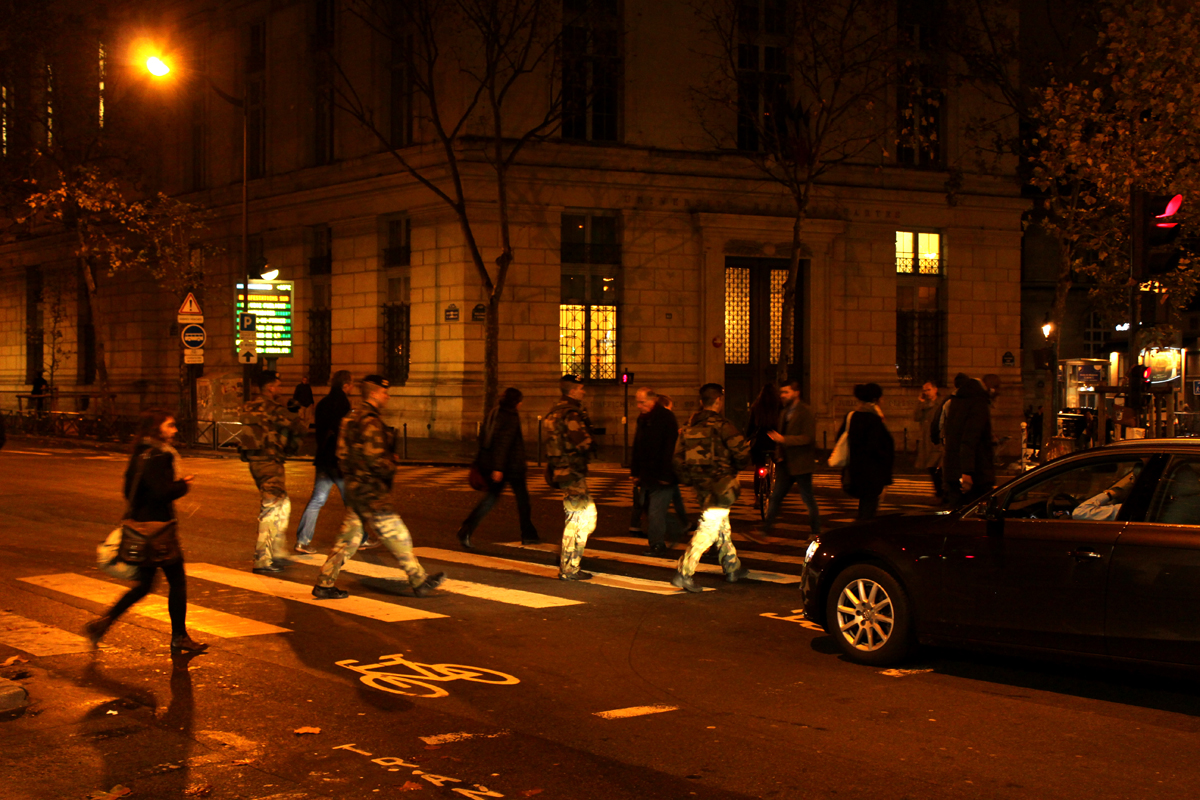 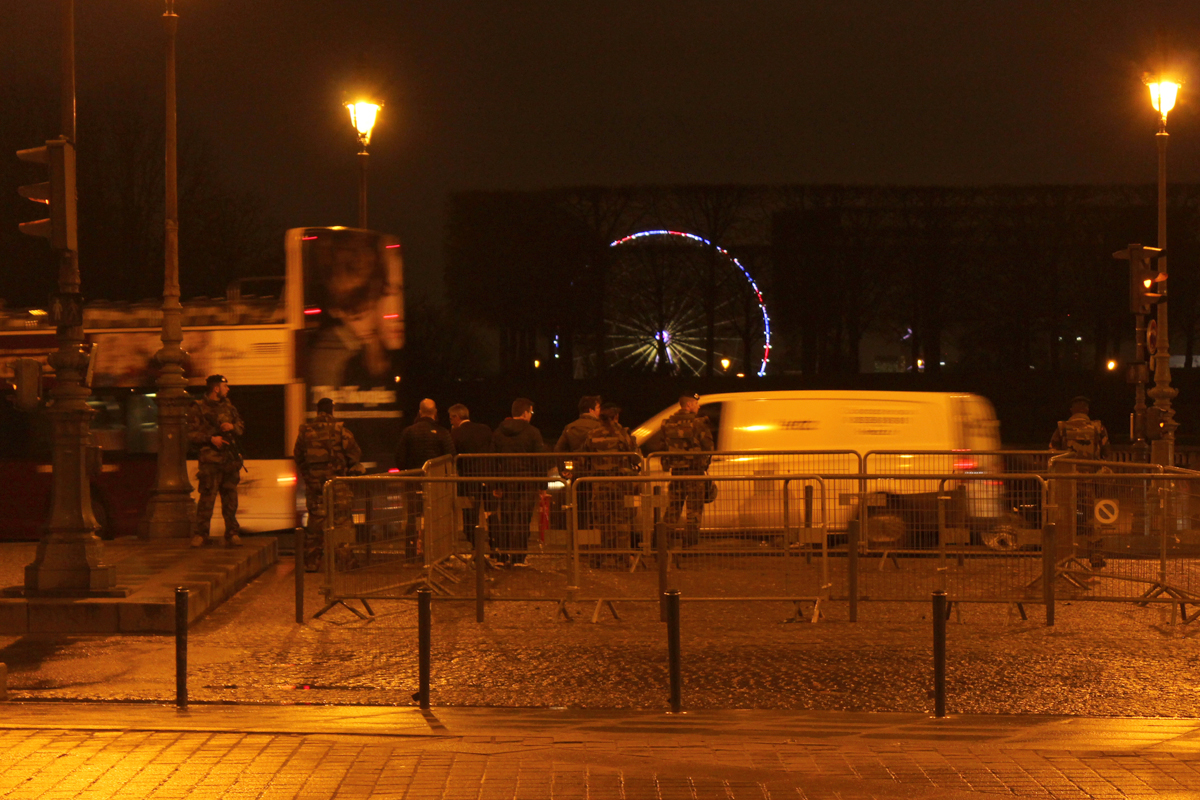