Léopold Lambert – Paris on August 25, 2016
If you enjoy articles of the blog, have a look at The Funambulist Magazine!

On August 12, 2015, 2,500 refugees, mostly Syrians and Afghanis, are kept prisoners for 24 hours in a stadium of Kos, a Greek island situated only a few kilometers from the Turkish coasts. They were promised that they could undertake their asylum claim in the European Union once they’ll be gathered in the stadium. It is not clear whether it was only a rumor or a trick from the Greek police. In any case, the 2,500 refugees, families and individuals who fled the civil war in Syria or the greatly precarious situation in Afghanistan were thus enclosed in the little stadium of Kos, forming a dense crowd under the sun of August for long hours. People fainting and panic movements were frequent, water and food were lacking, bathrooms were not accessible, and the tears of the children are a testimony of the cynic situation: populations fleeing tragic situations, accomplishing thousands of kilometers from East to West to find only additional turmoil once they set foot on the European land.

The fact that these 2,500 persons were gathered in a stadium could appear innocent at first glance. We could have thought that such a concentration of bodies could have taken place anywhere else. Nevertheless, places that simultaneously enable the gathering a great number of bodies as well as their control by a given authority are significantly limited, in particular in an urban context. This text will thus think the stadium as an architectural environment which sport and entertainment functions can, without any modifications be dissolved to be replaced by other uses related to a political concentration of bodies in such a space.

The recent example of Kos recalls — European authorities should also remember it — another historical example of such a concentration of persons against their will: the Paris “Vel d’Hiv” (Winter Velodrome) in July 16 and 17, 1942 that gathered over 13,000 Jews arrested by the Nazis and the French police before they were deported then assassinated in the Holocaust camps. This comparison is not a comparison of the politics that led to these two massive arrests — we may and should be heavily critical of the European Union policies in terms of immigration but cannot compare them to the Nazi industrial genocide — but rather, an observation of the similarities in the concentration of bodies in a premise which functions have been modified by these respective politics. 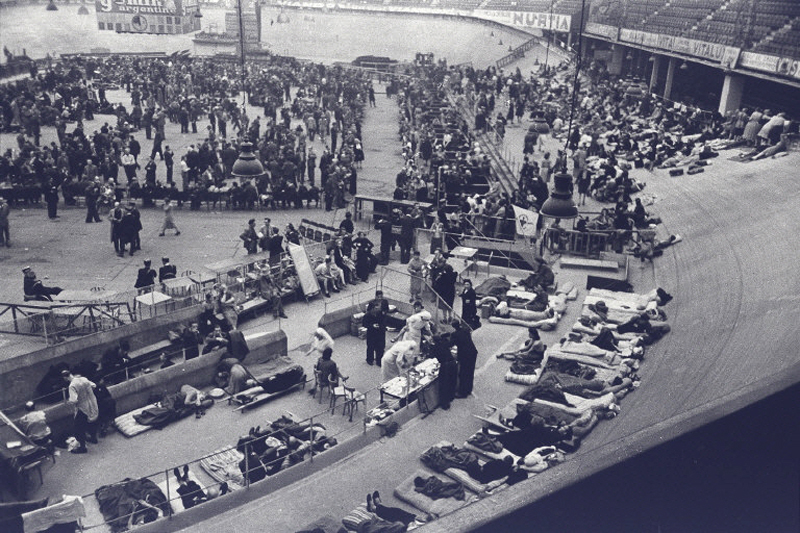 We can add to these two examples a third one: the New Orleans Superdome  during and right after the passage of Hurricane Katrina in late August 2005. The stadium, home of the American football team, the Saints, has been indeed used as a “shelter of last resort” for about 20,000 persons during one week. The human damages that the hurricane caused (more than 1,800 people died), as well as its material damages (more than 100 billions of dollars) were followed by the State of Emergency and the deployment of 45,000 soldiers of the National Guard to intervene, weapons in hands, against potential looting. Although the Superdome was a shelter and, as such, an environment in which its temporary inhabitants were not forced to stay, we have to interpret what this concentration of bodies in a stadium meant in the context of the State of Emergency policed by armed soldiers effectively forcing the city inhabitants to comply with a curfew at night. Moreover, the daily organization of several thousand of people’s lives in an environment that allows no intimacy constitutes significant difficulty and the New Orleans police intervened within the building a few times. The notion of control of the stadium is here again fundamental in the way we interpret this radical shift of functions.

Similarly, the photographs of hundreds of beds organized where, usually, the synthetic sport field is situated are particularly illustrative of the oddity of such a disruption of the traditional functions of the stadium. The concentration of bodies in the center of the building contrast with their absence in the bleachers in an inverse scheme of the one normally organizing the stadium: dozens of thousands of bodies densely present in the bleachers watching a small amount of others in their practice of a sport. Such an inversion allows us to ask the question of its meaning at a philosophical level: what does such an absence of spectators signify when the stadium leaves its sportive functions to become a carceral environment? Perhaps, it relates to the impossibility of a neutrality, of an innocence that such events imply: no one can be spectator of them, only the action at the center of the stadium constitute the reality to which every body contributes deliberately or not. 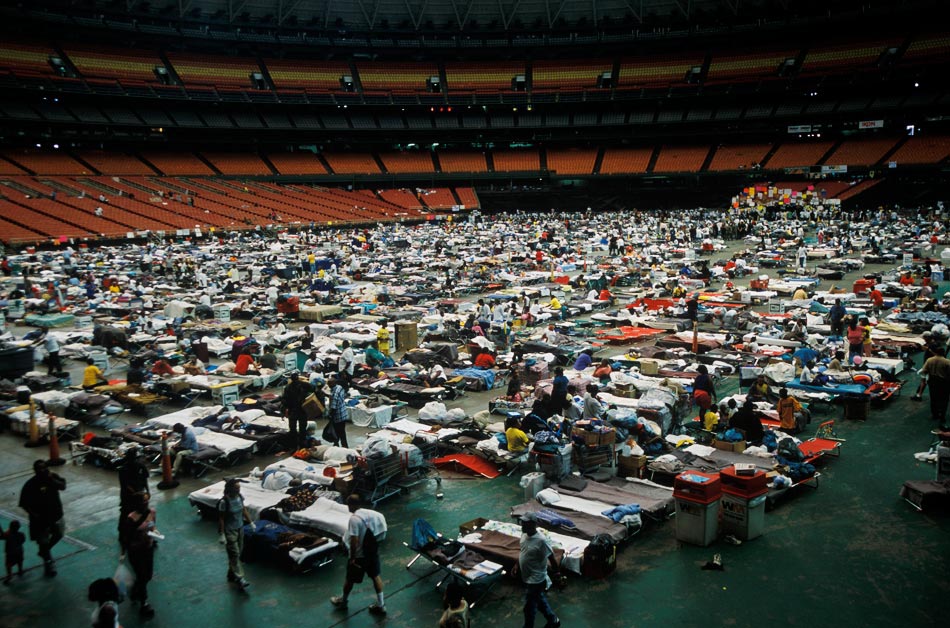 This dichotomy between the bleachers and the field enables us to think of the space that the stadium materializes. As evoked at the beginning of this text, the field of a stadium represents often a rare somehow empty space in the middle of a more-or-less-dense urban fabric. We can even think of the stadium, not as an assemblage bleachers+field, but, rather, as the architectural assemblage that surrounds the field, as if one had seek to protect this grass or earth surface from the rest of the city. Of course, this vision is quite ridiculously bucolic and involves an obsolete image of a schism between the city and an arguably opposed nature. Nevertheless, if we do not think of it through this anthropocentric opposition, but, rather, as the construction of a void — the void is not an anterior condition, it needs to be constructed — we may be able to think about this quite particular architectural typology.

When this void is well balanced with a significant urban density, it can become the scene of the democratic practice materialized in the gathering and community of bodies. This is the “between-the-lines” reading that we can make of Eyal Weizman’s book, The Roundabout Revolutions, which, from Cairo’s Tahrir to Bahrain’s Manama analyses the 2011 insurrections through the spaces that enabled these gatherings. We can also think about the construction of the Champ de Mars in Paris, as the democratic space of the French Revolution, when it was designed to host the 100,000 participants to the Fête de la Fédération on July 14, 1790. We can thus be surprised that the stadium does not belong to our imaginary of democratic spaces. After all, the etymology of the bleacher (i.e. tribune in French), refers to the tribuns, administrators of the Antic Rome and, as such, to the political practice of the city. The difference between Tahrir Square, scene of the 2011 Egyptian Revolution, and Port Saïd’s stadium where seventy-four persons were killed following a football game on February 1, 2012, is the capacity of gathered bodies in a space to escape from it. 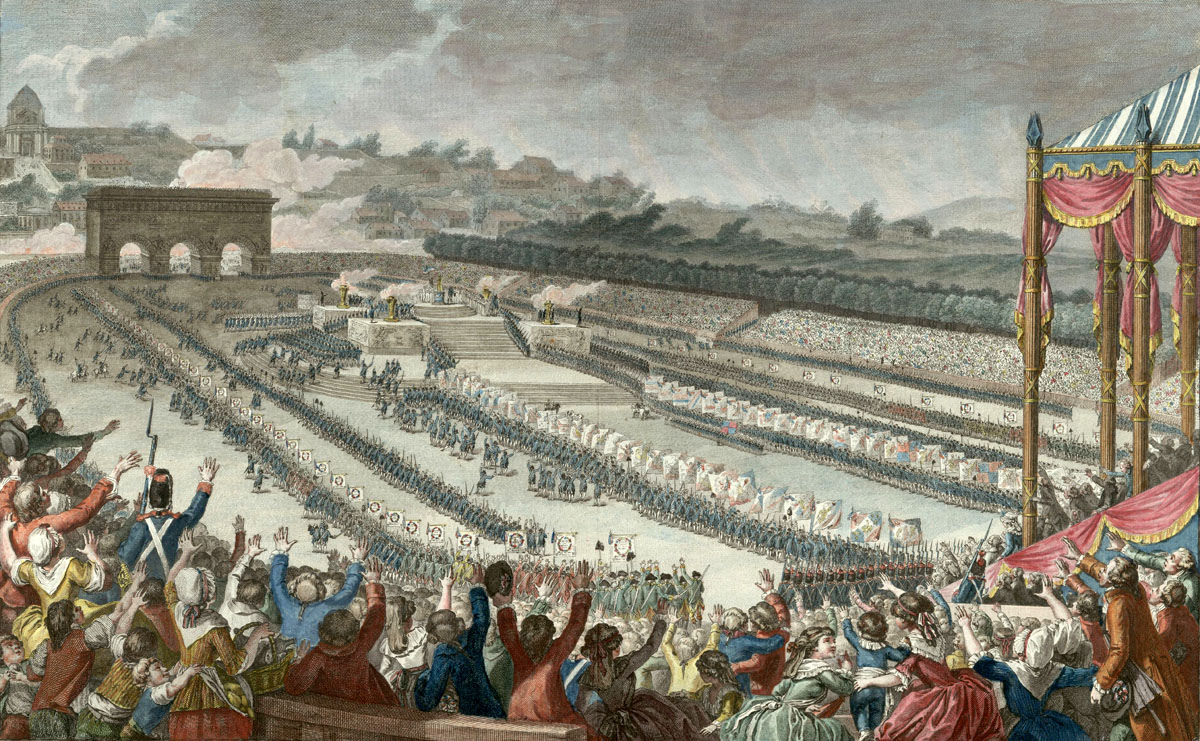 More often than not, a square results in an urban configuration of diverse architectural assemblages built in different eras by different architects and political representatives. What emerges from this difference is the difficulty to control this space in its totality since it responds to various logics that, eventually, creates several lines of flight. On the contrary, a stadium constitutes a cohesive architectural assemblage designed by agreeing deciders (architects, engineers, politicians, etc.). Architecture, in its capacity to structure space constitutes a particularly effective discipline to organize bodies in space, even when it does not correspond to an explicit politics of control — we should not forget nevertheless that stadiums are usually only accessible through the presentation of paid tickets and that the control of this economy has strong architectural repercussions. It is for this reason that a space designed for sport or cultural entertainment does not need any architectural transformation in order to become a carceral environment as we saw it through the historical examples of Kos, Paris and New Orleans. The control of bodies is already inscribed in its very materiality: only the motivation for such a control as well as its degree of acceptation of bodies themselves are modified in this political transformative process.

Let’s finish this demonstration by its logical conclusion: since architecture necessarily deploys a certain degree of control on bodies that it hosts, a veritably democratic space cannot be designed. Of course, this does not mean that architectural apparatuses cannot be created in order to diminish their own capacity of control, and we can imagine a stadium reducing as much as possible its carceral potentiality, however, such a practice involves thinking architecture against itself, that is, against its intrinsic characteristics. For these reasons, the stadium in its propensity to gather bodies and, therefore, to influence the social relationships between them, remains a particularly useful example to examine these characteristics, as well as the resistance that can be opposed to them.